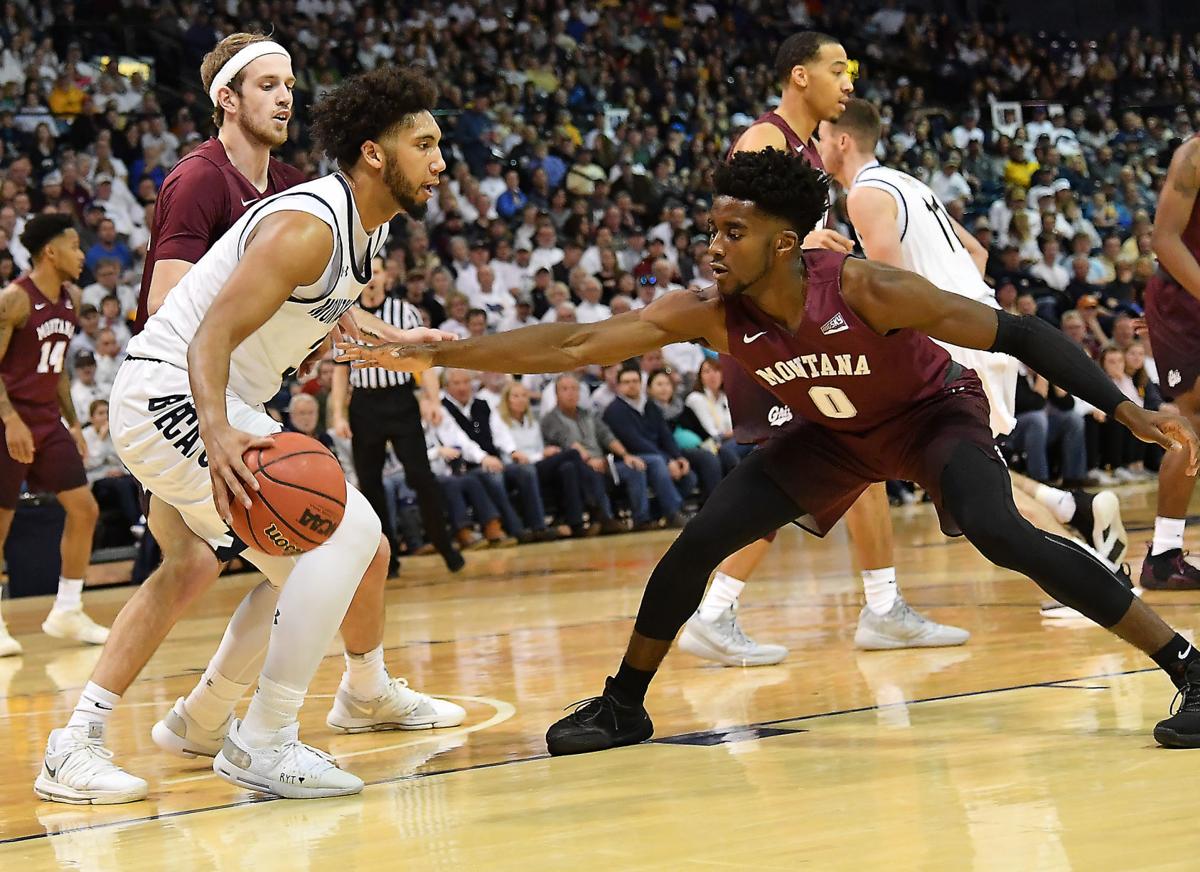 Montana State's Tyler Hall, left, is guarded by Montana's Michael Oguine during the 298th Brawl of the Wild on Saturday night at Worthington Arena in Bozeman. 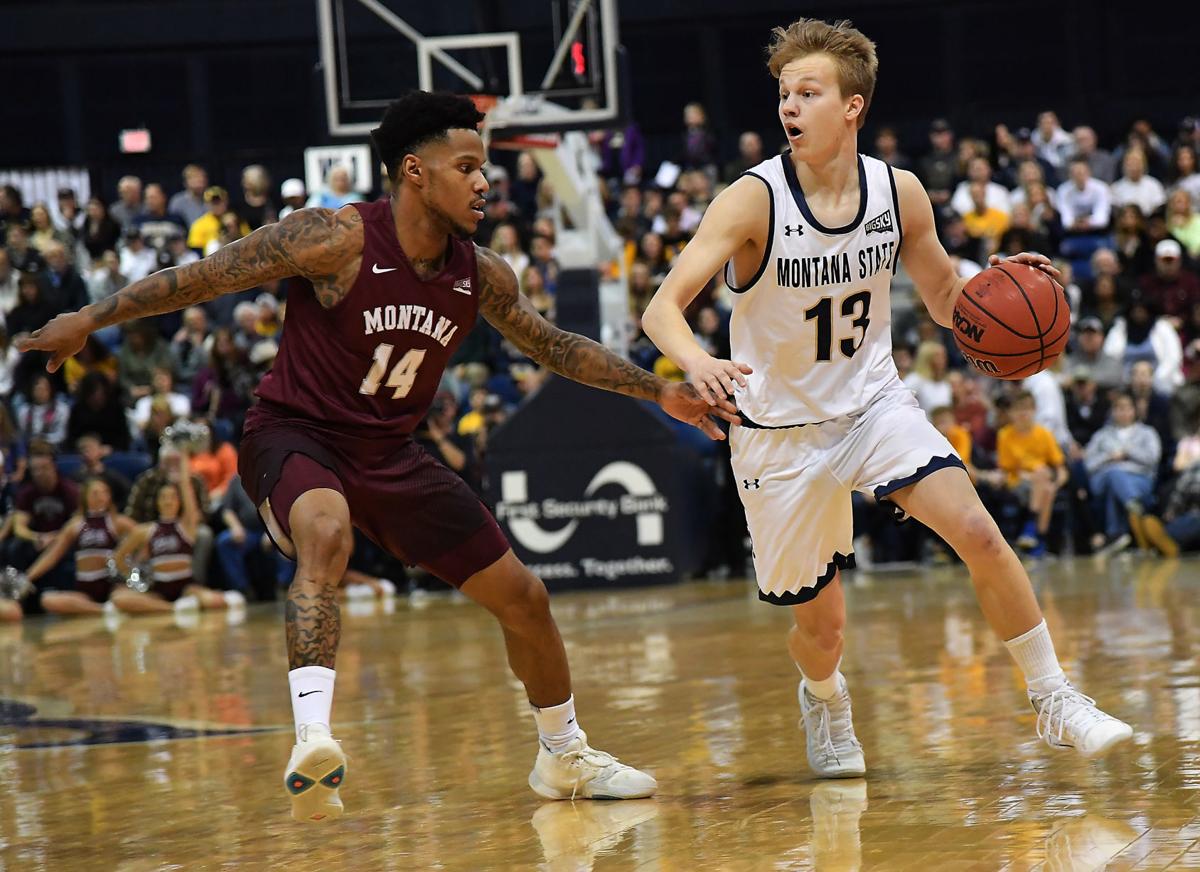 Montana State's Tyler Hall, left, is guarded by Montana's Michael Oguine during the 298th Brawl of the Wild on Saturday night at Worthington Arena in Bozeman.

BOZEMAN — Brawl of the Wild contests have sure had their crazy finishes this sports season.

Saturday night was no different. But this one didn't sting for Montana fans like the football Brawl back in November.

The Grizzly men's basketball team defeated Montana State 83-78 in the 298th version of the Brawl of the Wild at Worthington Arena in front of 6,013 fans.

“Just self-belief,” Oguine said on how they held on. “We’ve been here before. You have a group with a lot of veterans so we were able to sustain the momentum.”

“Couldn't draw it up any better if you want to create a theme and make a movie out of it,” Montana coach Travis DeCuire added. “We were going to have to out-scrap them to get the win. There’s no way you’re going to come in here and get a pretty win."

Montana withstood a scoring explosion from Montana State standout senior Tyler Hall. He finished with 26 points on 10-for-20 shooting, four of which came from deep.

Montana seemingly couldn’t miss to open the game, knocking down 8 of its first 11 shots including 4 of 5 from deep as the Grizzlies grabbed a 23-14 lead.

Bozeman native and freshman Mack Anderson made his welcome home meaningful, scoring on a layup right out of the gates before catching an alley-oop pass from Rorie to give the Griz their largest lead of the game at 33-21.

“We knew it wasn’t going to be a blowout like it has been in the past,” Rorie said. “We knew that we needed to outfight them on the hustle chart and we did that. It wasn’t just about making shots.”

From there MSU began mounting its comeback, going on a 12-4 run to get within 36-33. After repeatedly getting within a one-possession game, Livingston native Ladan Ricketts knocked down a 3-pointer as the halftime buzzer sounded to send MSU into the break up 48-46.

“It was fairly quiet,” DeCuire said about the locker room at that point. “We’ve got a veteran group that’s weathered the storm before and I thought they did a good job of that in the second half.”

The game went back-and-forth down the stretch with neither team grabbing an edge until UM led 77-69 with 3:53 to go, the second half’s largest lead. But Montana State quickly responded with six points to get within two with 2:21 to play. That was as close as they got as Rorie knocked down four free throws to end the game while junior Sayeed Pridgett added a layup.

Montana finished shooting 50 percent from the field including 38.1 percent from deep. The Bobcats finished 46.8 percent and 36.4 percent respectively.

Hall went 8 for 13 in the first half with 21 points but in the second half he cooled off thanks in large part to the defense of Montana senior Bobby Moorehead. Hall went 2 for 7 in the second half, scoring just five points and turned the ball over twice.

Fouls were aplenty in this game. Akoh and Pridgett dealt with foul trouble early and the teams combined for 25 in the first half. Montana got some help from Dorsey, who had arguably his best game as a Grizzly and scored all of his points in the first half, including a dunk on Montana State redshirt senior Keljin Blevins that resulted in a three-point play.

Montana State junior guard Harald Frey finished with 15 points and 10 assists. He scored six straight down the stretch that allowed MSU to get back into the game late. Redshirt sophomore Devin Kirby added 10 points.

“I think it’s about consistency. I thought we fought really well. We brought the energy. I just think it’s certain lapses where we give up easy points,” Frey said. “Certain defensive transition lapses and some mistakes that we really honestly shouldn’t make. If they’re making tough shots, pat them on the back and move on. But it’s those easy points that kills us.”

MSU coach Brian Fish also pointed to UM’s foul shooting as the key area where the Bobcats got beat.

“They out-scored us by 13 at the line,” Fish said. “In a game like that, in a very physical game, to beat us at the line that much is a tough thing to overcome. Some of that was we missed some free throws. We could have closed that gap and still been fine. But I thought that was the biggest difference in the game.

Fish is 1-8 against the Griz while DeCuire is 8-1 versus the Bobcats. When asked why the Grizzlies are such a challenge, Fish’s response was simple.

Montana improved to 15-6 overall and 8-2 in conference. Montana State fell to 8-12 and 5-5. Montana hosts Idaho on Thursday while Montana State is at Northern Colorado on Monday.

BOZEMAN — Harald Frey spied Devin Kirby running up the court with 2:21 remaining Saturday night and fired a bullet to his streaking Montana St…