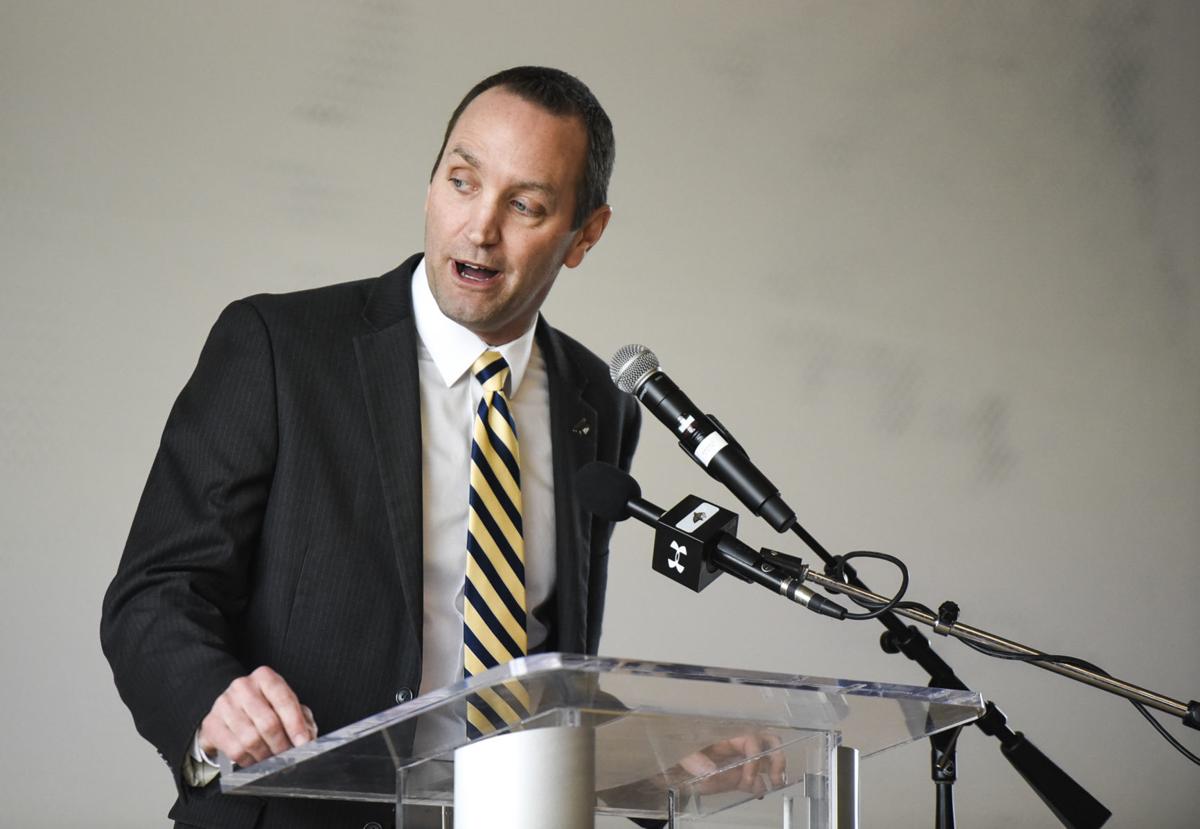 Montana State AD Leon Costello said he is still optimistic for an on-time start to the 2020 football season. 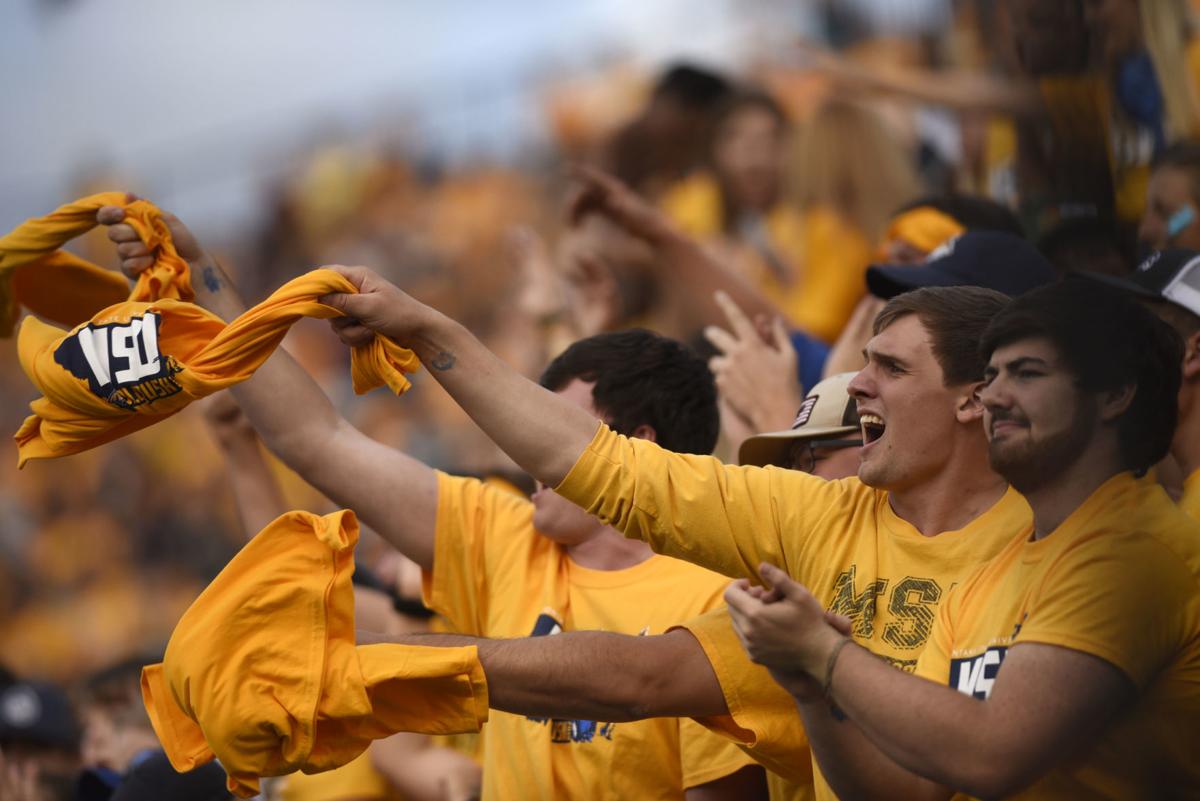 Montana State fans celebrate during the Gold Rush game on Sept. 7, 2019, at Bobcat Stadium in Bozeman.

Montana State AD Leon Costello said he is still optimistic for an on-time start to the 2020 football season.

Montana State fans celebrate during the Gold Rush game on Sept. 7, 2019, at Bobcat Stadium in Bozeman.

Montana State athletics has examined its budgetary situation on a daily basis. Officials have tried to project the department’s financial state by the end of the fiscal year in June. They’ve contemplated varying scenarios for if a full fall sports season would happen, what a partial season would look like and the consequences of no season at all.

“We don’t even want to consider that third option,” Costello, MSU’s director of athletics, said. “We’re still moving forward as if we’ll have a full fall season because we haven’t heard any differently as of now.”

Last week, Gov. Steve Bullock announced a phased lifting of his stay-at-home order in the wake of the coronavirus pandemic. However, the future of college athletics in the fall remains unclear.

While the state of Montana works to gradually return to normalcy, MSU athletics continues to gauge the ongoing effects of the COVID-19 outbreak. Costello told the Bozeman Chronicle that he expects his department has lost funds because of canceled spring athletic events.

When MSU isn’t operating as normal with students studying and living on campus, Costello said “of course the university is going to take a financial hit.” That impact could be lessened, though, with the return of fall sports.

“Everybody is going to work together to see how we can help the university mitigate this as much as we possibly can,” Costello said. “But I think we’re going to feel a little bit of that, and I think we all know that.”

Despite measures to limit spending, MSU has lost projected revenue for multiple reasons. That includes a roughly $300,000 decrease from the NCAA’s annual distribution — MSU previously expected to receive about $600,000 — after national basketball tournaments were called off. Costello said concrete losses won’t be finalized until the end of June.

MSU’s finances will depend greatly on how much of a football season will take place. According to U.S. Department of Education analysis, MSU brought in $8.7 million for football among its total $22.7 million in revenue for athletics in 2018-19.

Costello said MSU was behind on football season ticket renewals compared to normal in mid-April. Expecting that while considering the state’s economy, MSU extended the deadline to June 1. He added most renewals usually happen leading up to the deadline.

While the Bobcat Club is still collecting donations, Costello added that some athletic sponsors have had to defer payments.

“We’re trying to be sensitive to individual businesses or individual season ticket holders and how they’ve been impacted here financially,” he said.

MSU wasn’t affected as significantly as other college athletic departments because of its limited number of spring sports. That includes men’s and women’s outdoor track and field, women’s golf and men’s and women’s tennis.

The university in fact saved money on things like traveling. In-person recruiting has been halted by the NCAA during the pandemic, and spring teams weren’t competing on the road.

MSU also won’t be financially impacted by the NCAA allowing this year’s seniors participating in spring sports another year of eligibility. According to Costello, about 11 seniors at MSU will return among a possible 17 who could come back. He said his department will accommodate them with “little to no impact” on the overall budget.

This was possible, Costello added, with a close examination of each program’s scholarship numbers and incoming recruits and shifting money around without decreasing current scholarships to individual athletes. Costello said that helped MSU’s budget “tremendously.”

“We just looked at this from all angles to see how we could make this work,” he added. “To be able to do it and accommodate as many (athletes) as we are and not have to tell anybody no, I feel very fortunate to be able to do that.”

Costello didn’t have a threshold for returning to football, but he did say social distancing measures will need to be decreased. MSU students returning to campus would also have to be a critical step.

Costello didn’t rule out holding games with no fans or pay-per-view television options to recover some of the revenue that would be lost from ticket sales.

Though Bullock’s plan includes an eventual allowance for large groups of people, it did not provide a precise timetable. Costello added that social distancing in Bobcat Stadium would be challenging.

Also, how much states are impacted by the coronavirus and how they handle it may differ. That means opposing schools may face more restrictions for traveling by September. The Bobcats are slated to play schools from New York, Utah, Oregon, Colorado, California, Idaho, Washington and Montana in 2020.

With MSU’s 15 spring practices canceled, Costello hopes the Bobcat football team could essentially combine that preparation time with the normal fall preseason. That means practices would begin about seven weeks before the first game rather than the standard four.

The Bobcats are scheduled to host Long Island on Sept. 5 for their annual Gold Rush game to open the 2020 season, meaning Costello hopes for football practices to pick up in mid-July.

Other fall sports like volleyball and cross country would likely need a week or two less to practice. Costello wants any program returning to competition to steadily work back up to playing shape.

Canceling football games could provide another financial hit. MSU is set to pay Long Island $275,000 for the season opener but then would be paid $675,000 for visiting Utah the following week. Costello said discussions regarding the financial consequences of calling off those games hadn’t yet happened.

Big Sky schedules could be in flux as well. Costello said three committees planning for football, basketball and Olympic sports consisting of leaders from around the conference have talked twice a week about possible plans.

For example, if states like Idaho and Montana are ready to hold games, Costello said, MSU’s home games scheduled against Idaho State (Oct. 24) and Idaho (Nov. 14) may be moved up. This would give other states more time to deal with the coronavirus.

“We’re working on a national scale,” Costello said. “We’re still at a point where everything is on the table.”

“I’m going to be as optimistic as I can, and no one has told me otherwise,” he added. “Until the time comes that somebody tells me different, we’re going to be planning for a football season to start on time.”

Commissioner Tom Wistrcill is confident that college football will be played this fall. But what that looks like, he's not sure.