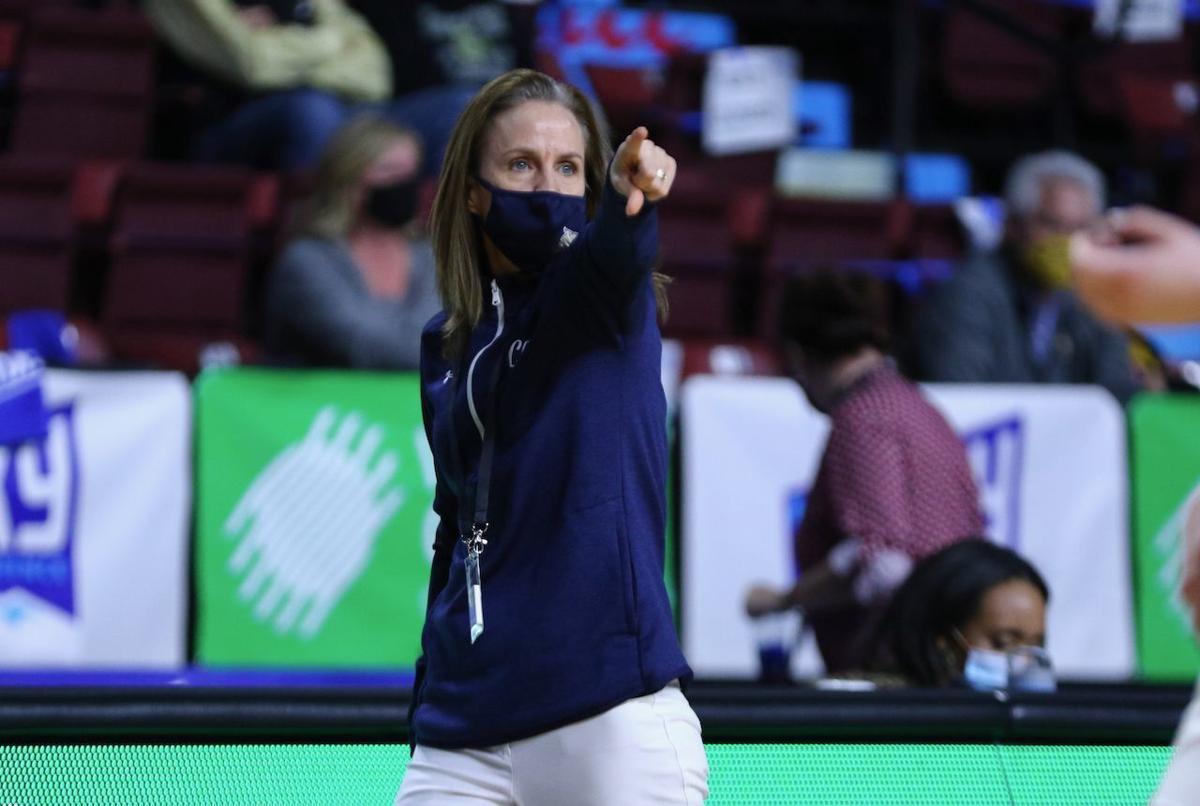 Montana State head coach Tricia Binford communicates to her team during a game against Idaho on March 10 at Idaho Central Arena in Boise, Idaho. 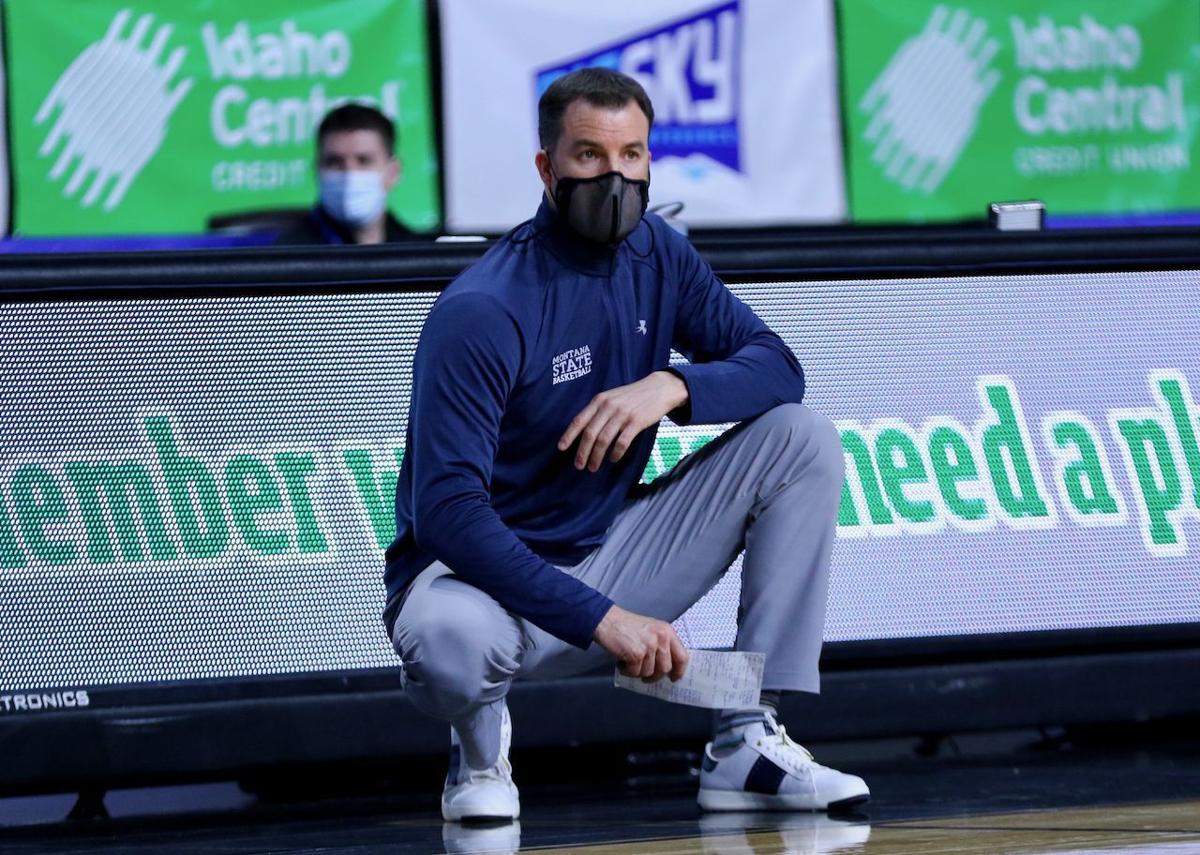 Montana State head coach Tricia Binford communicates to her team during a game against Idaho on March 10 at Idaho Central Arena in Boise, Idaho.

BOZEMAN — Montana State’s basketball programs have enjoyed concurrent stretches of success in the past few seasons, and their head coaches were rewarded for their efforts with new four-year contracts on Thursday morning.

When Binford signed her last contract, which went into effect on July 1, 2020, she became the only Big Sky women’s coach to earn more in base salary than her men’s counterpart. At that point, her base salary was $165,000 per year, compared to Sprinkle’s $164,000.

Binford’s extension comes on the heels of completing her 16th season as head coach of the Bobcats. In that time, she has become the winningest women’s basketball coach in school history with 270 victories. She is only 14 wins away from overtaking Brick Breeden (283) for the top spot in MSU men’s and women’s history. The Bobcats went 17-7 this past season and advanced to the Big Sky semifinals.

In a press release, MSU athletic director Leon Costello said the continuity of Binford’s team made her worthy of the extension.

“She continues to set the standard by fielding championship-caliber teams on the court and in the classroom,” Costello said. “We are fortunate she is a Bobcat, and I look forward to supporting her and the entire women’s basketball program.”

Sprinkle earned an extension just two seasons into his tenure as coach. He guided the men’s team to consecutive winning campaigns for the first time in 19 years. The Bobcats went 13-10 this past season and advanced to the Big Sky championship game as the No. 5 seed.

“I am excited about the progress the men’s basketball program has made in a short time under coach Sprinkle,” Costello said. “He is building the program the right way with a focus on academic and athletic success. I look forward to continuing to support him and his vision for Bobcat Basketball.”

Sprinkle will earn a retention incentive for every year he remains in his role. In addition to his base pay, Sprinkle will receive $25,000 after the first year. That figure increases in $5,000 increments each of the next three years, maxing out at $40,000 through the life of the contract.

Binford’s contract includes a similar clause. However, she will be paid $10,000 after each of the first two seasons of the deal. That figure increases to $12,500 in the third and fourth years.

Both coaches have the opportunity to earn thousands more in various performance incentives based on the classroom and on-court success of their teams.

For each year the MSU men’s basketball program maintains a four-year Academic Progress Rate average score of 950, Sprinkle earns an extra $10,000. He’ll receive an additional $5,000 if the APR score is 960 or higher. Sprinkle could also earn $5,000 more if his program maintains a graduation success rate that is equal to or higher than the overall Division I men’s basketball rate.

Sprinkle ($20,000) and Binford ($17,500) will also be rewarded for each year they promote and participate in fundraising, social or booster events or public speaking engagements.

Both coaches have a clause entitling them to $7,500 if they earn Big Sky coach or co-coach of the year honors. If Sprinkle earns it, each of his assistants will also receive $500.

Binford will earn $7,000 if she is recognized as a regional or national coach or co-coach of the year. Sprinkle would receive $5,000 for the same honor.

The coaches would receive the same amount if their team finishes as conference regular-season champions or co-champions ($7,500), makes the NCAA Tournament ($10,000) or is selected for the NIT or WNIT ($2,500).

Both Sprinkle and Binford have the option to negotiate extensions of various lengths after each year of their respective contracts.

In the event Binford is relieved of her duties, the school will continue to pay the remaining unpaid portion of her contract. If Binford were to leave the school for another coaching position before her contract ends, she would have to pay the school according to the same terms. That amount could be covered by her next employer.

Sprinkle’s contract stipulates he be paid two years of base salary and benefits if he is removed from his position during the first two years. If that move happens in the third or fourth year, he would receive the remaining unpaid amount of the contract. If he voluntarily leaves within his first two years, he — or his next employer — would pay MSU two years of base salary, which would be $334,560. If that move occurs in his third or fourth year, he pays his base salary multiplied by the number of years remaining on his contract and/or any extension.

For the immediate future, though, their programs’ stability and success seem to be reasons enough to remain in Bozeman and continue leading contenders at the top of the Big Sky.

“We are going to continue to pursue excellence both on and off the court and take this program to new heights,” Binford said in an MSU release.

Sprinkle added: “We are going to continue to build off the success we have had so far. We are going to work to keep this program among the best in the conference and compete for championships for years to come.”

Montana State's coaches have had successful runs in recent years.