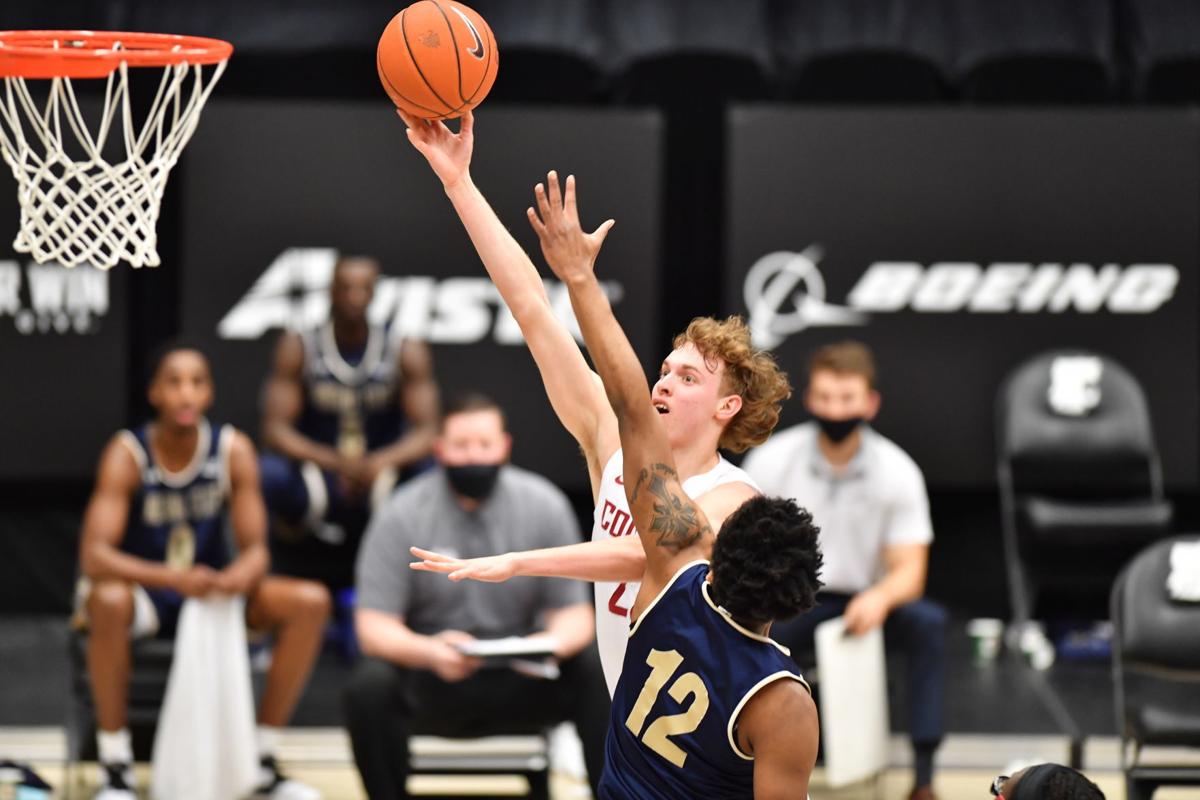 Montana State forward Borja Fernandez (23) lifts his arms straight up while defending a shot against Washington State on Friday in Pullman, Washington.

BOZEMAN — After a 40-point win five days earlier, Danny Sprinkle still wasn’t happy. He saw the flaws in the way his team defended. Montana State was beat off the dribble too often, he thought.

On Friday at Washington State, the head coach’s worries came to fruition. An opponent from the Pac-12 capitalized on the Bobcats’ deficiencies. The Cougars attacked the rim freely. The defensive identity Sprinkle wants was nowhere to be found.

“(Having a defensive identity is) what we need to be about if we want to be a winning program,” Sprinkle told the Chronicle. “We're not talented enough offensively yet to not guard.”

MSU (2-2) lost to WSU 82-54 on Friday in Pullman, Washington. The 28-point margin marked the second-largest defeat in Sprinkle’s 35 games as head coach. The Cougars shot 49.1% from the field, just the fifth time under Sprinkle an opponent has shot that well. All five instances resulted in losses.

The Bobcats didn’t lose only because of their defense. They shot 26.8% and only made six 3-pointers. But so often last season, when the offense struggled, MSU could at least compete in games because of its tightly-packed, man-to-man defense.

That wasn’t the case Friday.

“We can't be that team that when we're not making shots, it affects us on the defensive end,” Sprinkle said. “We're kind of so young and inexperienced right now that it did. It's not an excuse, but it's something we need to learn from.”

Last season, Sprinkle’s first as head coach, the Bobcats’ path to victory was clear. They were 0-11 when allowing more than 70 points and 16-4 when allowing 70 or less. The Bobcats played longer possessions and therefore limited the number of chances each team had to score.

While the offense has been revamped to feature better perimeter shooting, Sprinkle still wants effective defense to be the backbone of the Bobcats’ success.

Through four games, they’ve been exposed.

“We need to get stops to where we're not taking the ball out of the net and letting the other team set their defense,” Sprinkle said, “because then it's harder to score on them. We didn't do a good enough job of that (Friday).”

Williams, who Sprinkle referred to as “a pro,” blew by Gazelas, got to the rim easily and made the layup.

In a six-minute span, it went from a 13-point game to a 22-point game because MSU allowed too many plays like those. Washington State scored 46 points in the first half, including 22 in the paint, and shot 62.1% from the field.

The second half was better for the Bobcats. They held the Cougars to 36 points and 35.7% from the field, but the score was never close. MSU was also outrebounded 49-30 and its offense never created enough open shots consistently.

“It was good for our guys to learn that's kind of how I envision our program playing,” Sprinkle said. “Shooters all over the floor, guys guarding their yard, really just staying in front of their guy and guarding one-on-one and not getting into scrambles or rotations. And then rebounding.”

In recent weeks, freshman guards Kellen Tynes and Tyler Patterson have talked about taking it personally when they’re scored on and taking pride in the defensive end. They said they aim to hold opponents under their averages.

Since former Bobcat guard and WSU leading scorer Isaac Bonton (17.4 points) missed the game due to a thigh injury, Williams (14.8 points) was the only Cougar on the court averaging in double digits. Four Washington State players scored at least 10 points Friday, including Williams’ 21. The Cougars surpassed their 66.3 points per game average by 16.

With a roster full of new players, following MSU’s third Division I game of the season and against a Pac-12 opponent, it may be too early to draw too many big conclusions.

But a clear trend is beginning to emerge.

“We're not great one-on-one defenders so we got to be really good team defenders,” Sprinkle said, “and that's an ongoing process.”

Montana State men out of sorts in loss at Washington State

In the season’s first three games, Montana State moved the ball fluidly on offense and defended enough to be in position to win each time.