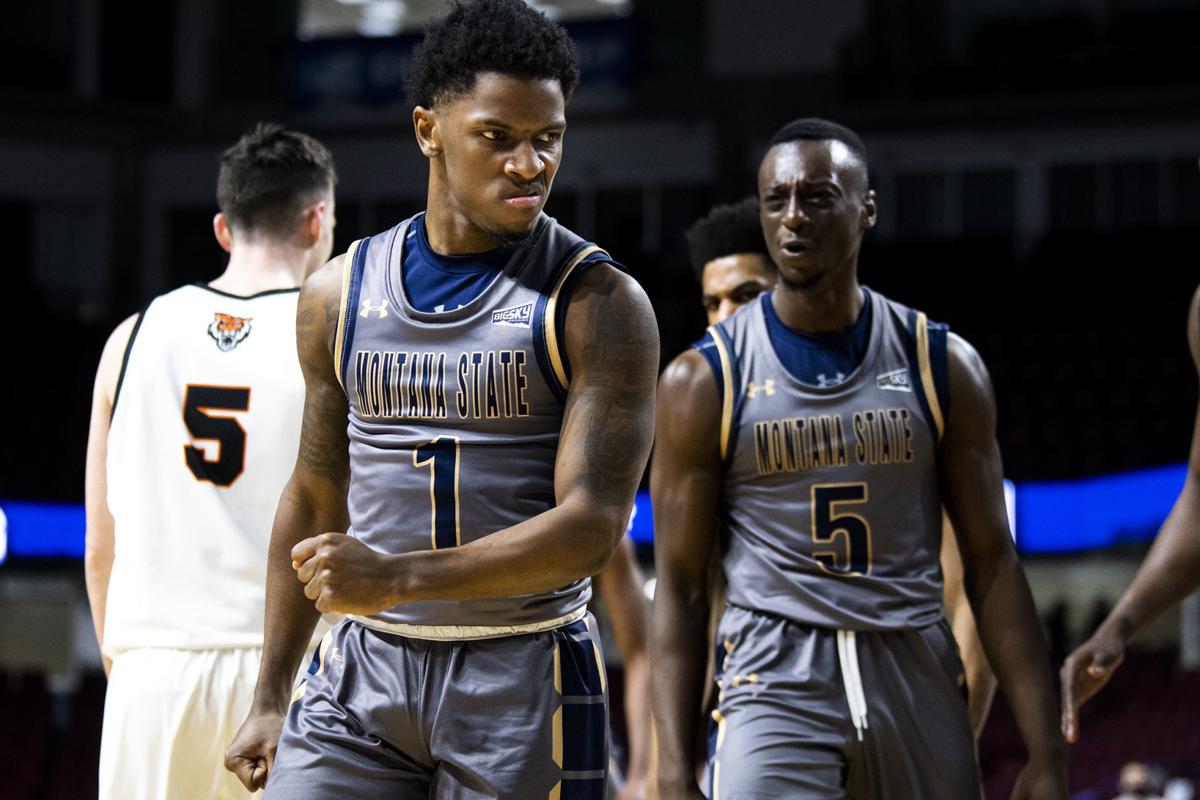 Montana State’s Xavier Bishop reacts after making a layup after being fouled during the Big Sky Conference basketball tournament quarterfinal game between Montana State and Idaho State at Idaho Central Arena on Thursday. 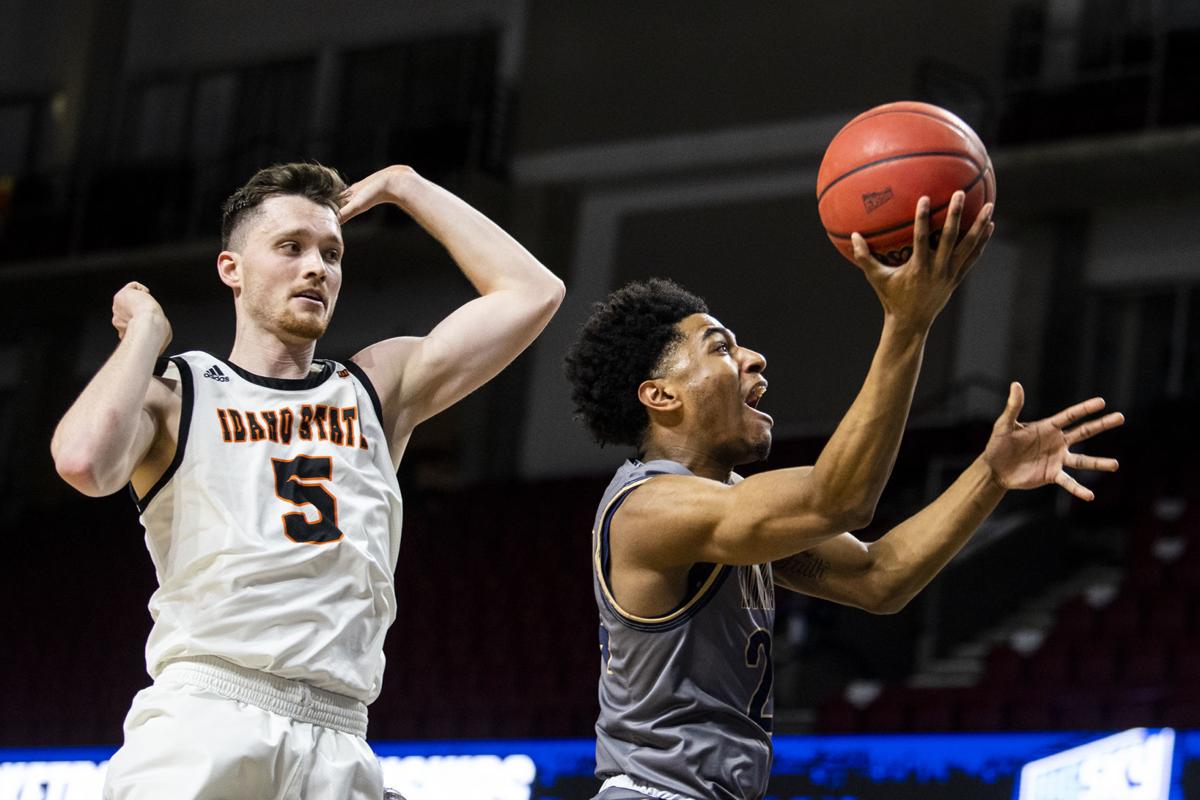 Montana State’s Xavier Bishop reacts after making a layup after being fouled during the Big Sky Conference basketball tournament quarterfinal game between Montana State and Idaho State at Idaho Central Arena on Thursday.

BOISE, Idaho — Exhilarated by the moment, Jubrile Belo purposely hit his head against the padded support beam for the hoop he just rocked by dunking.

With determination to find any sort of offensive pace for Montana State, Xavier Bishop drove down the left side of the lane. He bounced a pass behind him, past two Idaho State defenders, to Belo. Daxton Carr tried to swat the ball out of Belo’s hands, but he was too strong. He slammed the ball through the basket, causing it to shake as he dropped back to his feet.

Plays like this, signs of determination, led Montana State to victory. The No. 5-seeded Bobcats fought for a 71-63 victory on Thursday in the Big Sky quarterfinals against No. 4 Idaho State at Idaho Central Arena. This is the first time MSU will move on to the Big Sky semifinals since 2009.

Idaho State and Montana State had not played each during the regular season, an anomaly which was a result of COVID-19 protocols on MSU’s part.

This meant the opponents which both had first-round byes during the Big Sky tournament were unfamiliar with each other. Bobcats head coach Danny Sprinkle and MSU’s coaching staff could only watch film and try to come up with some strategy to help them win.

From the beginning, MSU’s plan was to give the ball to Belo, and it worked. With 12 minutes left in the first half, Idaho State led by seven. Bishop drove down the lane and bounced a pass down to Belo. With power, Belo turned around and slammed down a two-handed dunk.

This was part of a 10-1 run that ended with Belo making a pair of bonus free throws with over eight minutes left before halftime.

A little while later, Belo furiously fought for position down at the block. After an MSU shot ricocheted off the rim, he corralled the offensive rebound and went back up with another dunk. He was 4 for 4 from the field in the first half.

Belo shouted and walked back to his team’s sideline for a timeout. Abdul Mohamed crouched as he walked up to Belo before eventually meeting Belo with a chest bump.

This appeared to no longer be the team that was on a five-game losing skid against Big Sky opponents. This squad was in control like the one that started 6-0 in conference play.

Montana State also had a solid defensive approach. The Bobcats double-teamed post players and successfully rotated around the perimeter to keep the Bengals from having open jumpers. Before halftime, the Bengals, who entered the Big Sky tournament ninth in the conference with 68.4 points per game, made 32% of their shots and just 2 of 10 3-pointers.

The Bobcats were 0 of 5 from deep, but they found other ways to score. Late in the first, Bishop crossed over in front of an opponent and drove along the baseline. He flew through the air, drawing a foul and spun the ball behind him as he drained the reverse layup.

The Bobcats also scored 13 point off turnovers. Less than two minutes before the break, Kellen Tynes tipped an Idaho State pass away, saved it from going out of bounds and raced down the court. With defenders next to him, he went full speed ahead.

Tynes made his layup through contact. A foul was called. He flexed his muscles and shouted near Idaho State’s sideline area. His three-point play was part of Montana State’s 8-0 run to close the first half.

Though MSU never gave that lead up in the second half, the intensity never left. When Montana State was called for an offensive foul a few minutes after intermission, Sprinkle was handed a technical foul for arguing the call.

Both offenses remained stagnant. The Bobcats were 8 of 20 from the field and the Bengals were 10 for 33.

Bishop was just 2 for 9 after halftime, but he made all six of his free-throw attempts for 11 second-half points. In a game that featured 55 fouls, that was crucial. The Bobcats were 17 of 24 from the line while ISU was 13 of 17.

But the Bobcats did just enough to remain in front, like when Bishop hit a 3 to give MSU new life with about 12 minutes remaining.

Though neither team found much offensive rhythm, the Bobcats played stout enough defensively to move on in the conference tournament.

The Bobcats are adamant they aren’t done.

“I didn’t take this job,” Sprinkle said shortly after the game, “just to get to the semifinals.”

Big Sky basketball championships to remain in Boise through 2026

The Big Sky Conference's men's and women's basketball tournaments will remain in Boise, Idaho, for at least five more years.

Professional hitter: MSUB slugger Daniel Cipriano about much more than the long ball