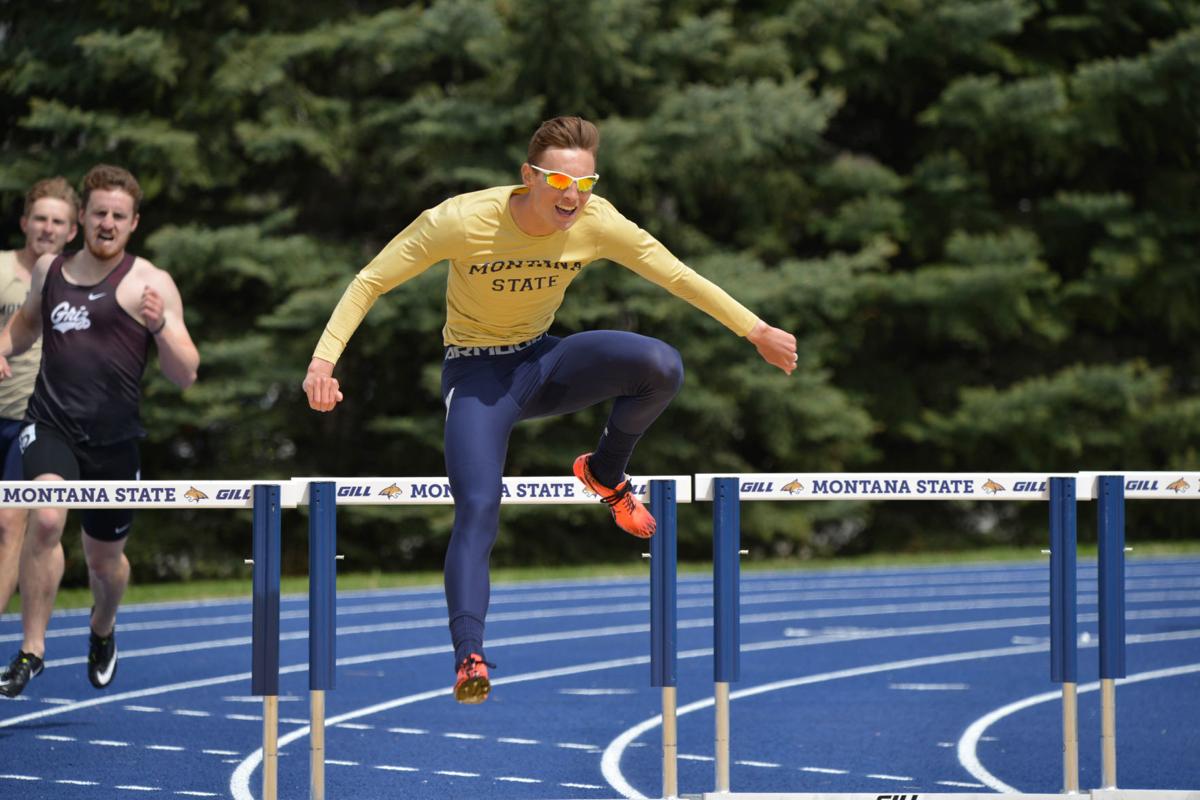 BOZEMAN — Isolated and with no promise when he would compete again, Drake Schneider’s drive remained.

Every day during the beginning of the COVID-19 pandemic, he ate breakfast then walked over to a nearby track in his hometown of Eau Claire, Wisconsin. His season was canceled. His training was not.

Growing up, Schneider hoped to compete for a Big Ten program. But none wanted him. It’s still bothersome.

He broods over it every time he lifts weights. When he scans a national or regional performance list, he highlights those from Big Ten schools ahead of him. Then he works to surpass them.

Rejection has become Schneider’s fuel. Earlier this month, he won his third-straight Big Sky championship in the 400-meter hurdles in 50.17 seconds. The Montana State senior will be among 13 Bobcats to compete during the NCAA West Preliminary at Texas A&M this week. He ranks 13th heading into the event.

Schneider’s been a Big Sky champion since his freshman season. He’s broken his own MSU record in the 400 hurdles. And he wants to accomplish much more.

“I feel pretty good going into regionals,” he said. “I couldn’t have asked for much more of this season.”

Schneider’s father was a college track coach, so he grew up around the sport. He was fascinated by its technical demands. This created his desire to compete for a Division I team.

Schneider “wasn’t overly happy” Big Ten schools didn’t recruit him. In fact, he didn’t stay in the Midwest because he didn’t want to be forced to constantly run against those programs.

He called it deflating. But it stoked his desire to improve.

Transitioning from high school to college, he didn’t know what to expect. But his mindset flipped when he excelled almost immediately. As a freshman, he won two titles at the Big Sky meet, one in the 400 hurdles and another on the Bobcats’ 1,600 relay.

As a sophomore, Schneider was a two-time all-conference honoree during the indoor season. At the Big Sky meet, he was a member of a school-record 1,600 relay which took gold. In the 400, he earned bronze.

During the outdoor Big Sky meet, he won another 400 hurdles championship. His converted time of 51.38 seconds smashed MSU’s record and was the 31st-fastest mark in the West Region. It advanced him to the NCAA Preliminary Round.

After the season, Schneider and Bobcats sprints coach Jay Turner talked about the next step. They both agreed Schneider was capable of reaching the NCAA finals.

“We felt like, although his times weren’t quite there yet, that he had it in him. We just needed to continue to progress,” Turner said.

“He stuck to it. He dug in and started working even harder. Why? Because he has those goals in mind, and he wasn’t going to let anything get in the way of that.”

Schneider secured third in the 200 and 400 at the indoor Big Sky meet as a junior. His outdoor season, though, was axed because of the pandemic.

He rested only about a week or two. He couldn’t let a short-term setback detract him from reaching his long-term aspirations. He returned to Wisconsin and began training.

Nobody was there to press him forward. He alone needed to convince himself the value of every repetition. Turner believes Schneider’s patience and willingness to continue striving for better results illustrates his determination.

“That kid has worked his tail off as long as he’s been here,” Turner said. “He’s very goal-oriented, so he didn’t want to fall behind anybody.”

When the Bobcats returned to team practices, Schneider was already in shape. He was set to excel.

In April, Schneider won the 400 hurdles at the Bengal Invitational in Pocatello, Idaho, in 50.12 seconds. His time, converted to 50.19 due to altitude, was the second-fastest ever by a men’s Big Sky runner. It placed him in the top 10 of the West Region rankings and was one of the 25 fastest performances in the world this year.

This breakthrough further affirmed to Schneider he deserved to compete against the best.

Turner is sure Schneider can qualify for the Olympic trials. The more they work together, the more the Bobcats coach is adamant in that belief.

Schneider is intent on maintaining his pace of development. He plans to return to MSU next season, then pursue a professional path in the sport.

“If I can be sponsored, so be it. If not, so be it,” he said. “I believe I’ll be faster than I am right now and that will warrant at least giving it a go post collegiately.”

Once his time at MSU is over, Schneider expects to move to the East Coast and continue his training.

He has no backup plan. He’s fully committed to at least finding out how far track can take him.

When Schneider was asked what he loves about the sport, he needed a moment to ponder. His answer was reflective of the mentality he’s maintained for years.

“It’s just about, ‘How good can you get?’” he said. “What draws me to it is the curiosity of what my limit really is. Even now, I feel like there’s so much more I can do to cut more time off.

“It’s all about your own mentality and how you’re going to get through each day so you can be better.”

Montana State had 13 athletes declared as entries Thursday into the NCAA West Preliminary hosted by Texas A&M at E.B. Cushing Stadium beginning May 26.