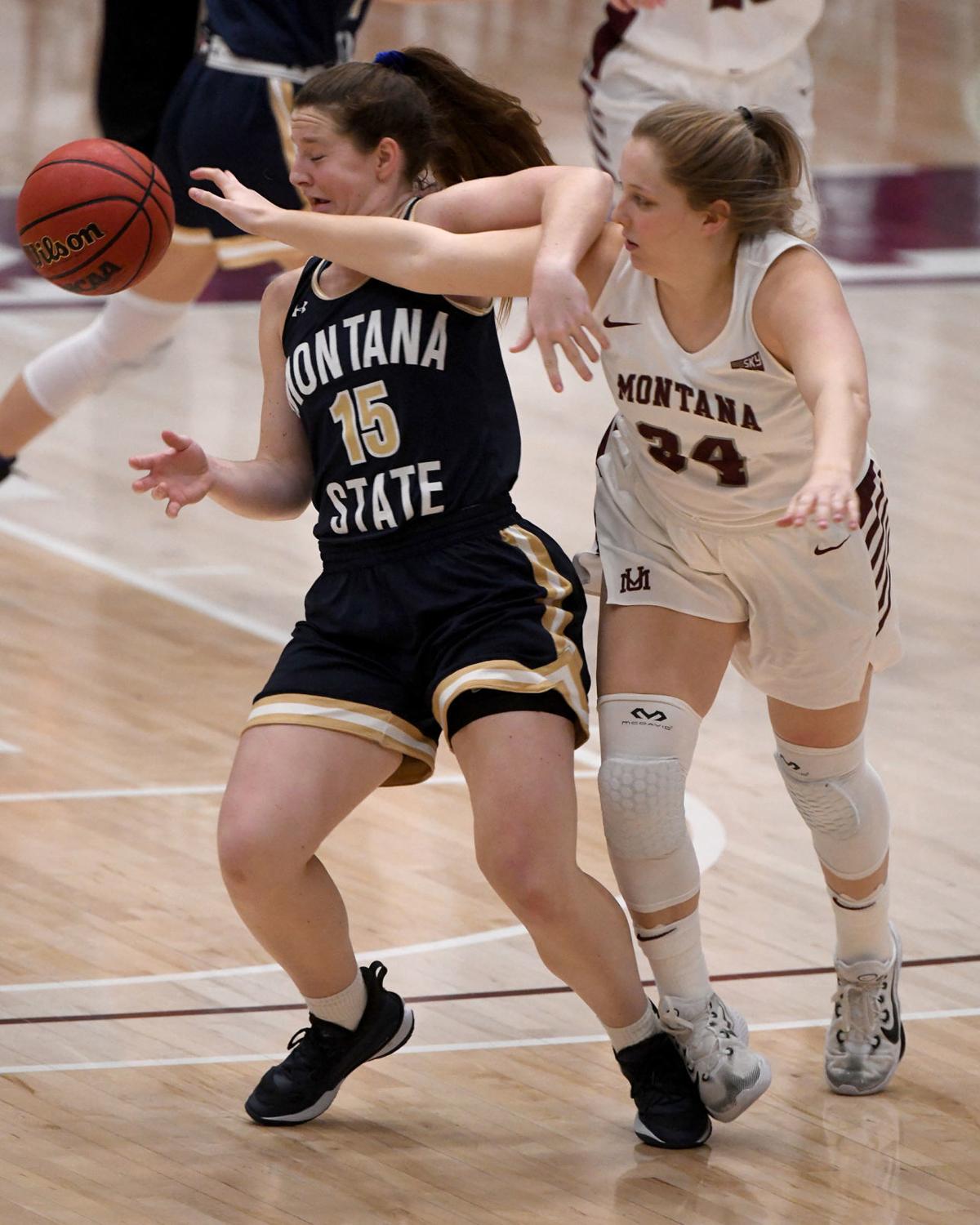 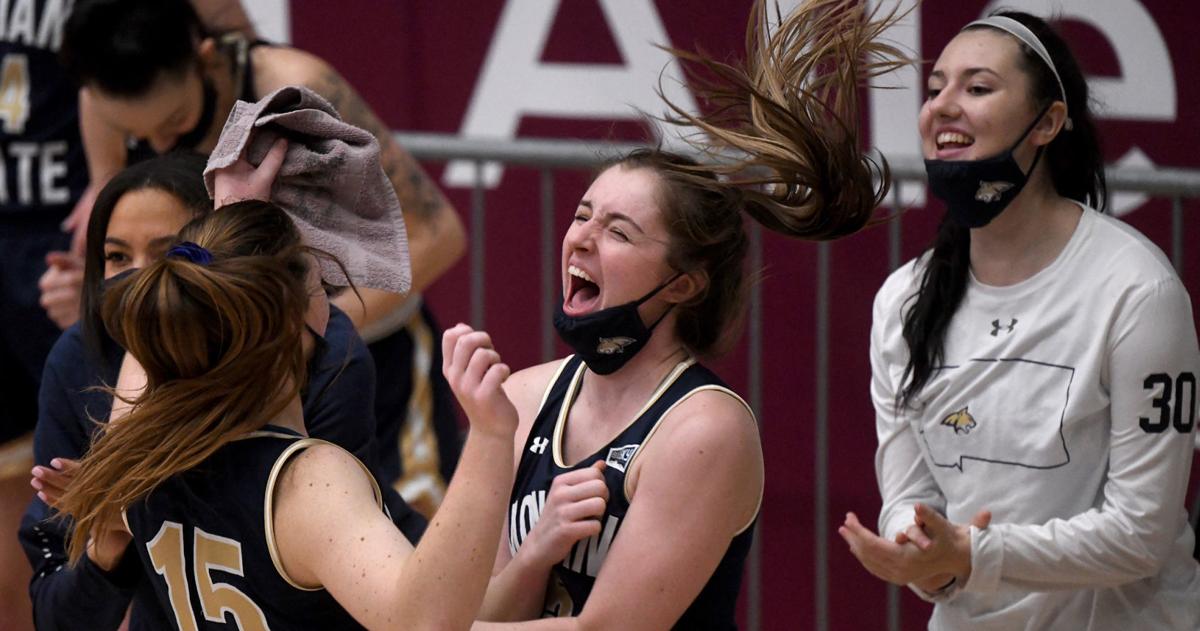 MISSOULA — With the shot clock ticking down, Ashley Van Sickle caught a pass behind the arc. There wasn’t enough time to make any other play. So she launched the 3-pointer.

After an offensive rebound extended the possession in the first place — and with Montana State’s star point guard waiting at the scorer’s table to check back in — Van Sickle’s 3 ricocheted off the backboard and into the hoop.

Montana had just made one of its many pushes for victory. But Van Sickle bumped the Bobcats’ lead back to eight with four minutes left. Bench players leapt toward each other to celebrate.

On MSU’s next offensive trip, Tori Martell drove to the basket, rolled in a layup and absorbed contact that caused her to hit the hardwood. The whistle blew and players hugged while huddling up.

Following the media timeout, Martell knocked down the free throw to put the Bobcats up by 11. They closed out the 70-60 win Saturday at Dahlberg Arena.

“I don't have words for that,” White said. “Just seeing our team have that momentum, have the energy, the courage is so exciting.”

Montana State (9-5, 6-2 Big Sky) scored the game’s first points and led the entire contest. The Bobcats answered every time the Lady Griz made a run. MSU has won six straight rivalry matchups and 11 of the past 13.

White scored a team-high 19 points, freshman Taylor Janssen tallied a career-high 11 points and Martell pitched in 10. The Bobcats won the rebounding battle 38-31, made 9 of 21 3-pointers and held UM to 3 of 18 from behind the arc. MSU’s offense slowed in the second half, but the Bobcats made crucial defensive stops.

On Thursday, they cruised to a 24-point win and held the Grizzlies to 10 points or fewer in each of the first three quarters. Saturday’s contest differed in how UM (7-6, 4-4) stayed close. Though the Grizzlies never led, they consistently were close to a comeback and were within five points in the final minute.

“I was actually almost even more proud of this win than the Thursday win,” MSU coach Tricia Binford said. “... How the adversity struck and seeing how kids respond to that scenario and that situation, I think just shows a little bit of the perseverance and the relentlessness of staying together and staying the course.”

MSU started conference play by splitting series against Northern Colorado and Portland State. The Bobcats felt both losses, by a combined 10 points, were winnable. But with a young team, they also knew this season would be a process.

Binford has noticed improvement in recent weeks particularly on the defensive end. Players have more firmly grasped defensive schemes and executed for the full length of possessions. This weekend, they displayed the strides they’re making.

“As soon as it clicked,” Binford said, “it was going to click.”

Leading up to Saturday’s contest, Binford was most worried about how players would respond to the short turnaround after Thursday’s game. The rivalry is always emotional, the 16-year head coach thought, so playing the same opponent two days later posed a potential challenge.

After only scoring nine points in Thursday’s first quarter, MSU scorched UM to start. The Bobcats scored 13 of the game’s first 15 points and immediately set the tone for the rest of the afternoon.

From then on, the Grizzlies were forced to play catch up. They never eliminated their deficit.

“I truly believe if we had tied that game, I think we could have came out on top,” UM forward Carmen Gfeller said. “But it's just a matter of getting there to begin with. MSU is tough. Their defense was tough.”

Kola Bad Bear then made a layup, and Skye Lindsay hit a jumper after two offensive rebounds. MSU was back in control.

Similar sequences played out all game.

Later in the second, Janssen drained a 3-pointer, increasing the lead to eight. Her teammates stood up on the sideline and Bad Bear let out a yell.

The Grizzlies were within four points late in the third quarter. White responded by knocking down two free throws, and Gabby Mocchi scored on a three-point play. As Mocchi walked to the free-throw line, she high-fived teammates who excitedly screamed in her face. Five straight points gave MSU a nine-point cushion entering the fourth.

In conversations with teammates, White said they told each other not to worry about each UM run. Players stayed positive by focusing on themselves.

“We're really gaining our identity. We're finding out who we are,” White said. “I think it's making us a very dangerous team.”

UM head coach Mike Petrino repeatedly said his team couldn’t turn stops into points. That’s because of how the Bobcats played. Even when their offense stagnated, they never let the Grizzlies take control.

This was the type of winning instinct MSU lacked earlier in the season.

In the final quarter, the Bobcats made 12 of 13 free throws, sealed their fourth straight win and continued climbing up the conference standings.

In a mostly empty arena, the Bobcats were the only ones making noise.

Playing just how they wanted, the Bobcats thwarted Montana 70-46 for their fifth straight win in the series and 10th in 12th meetings.