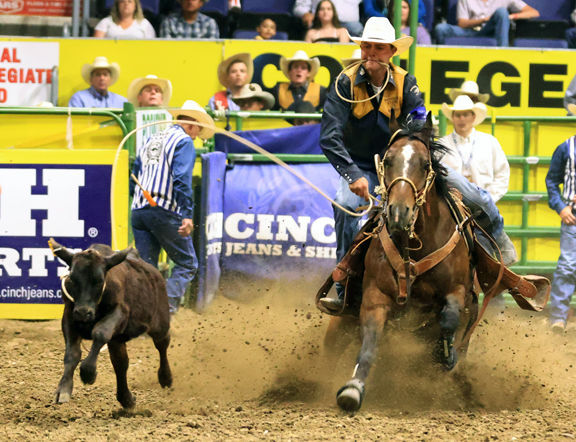 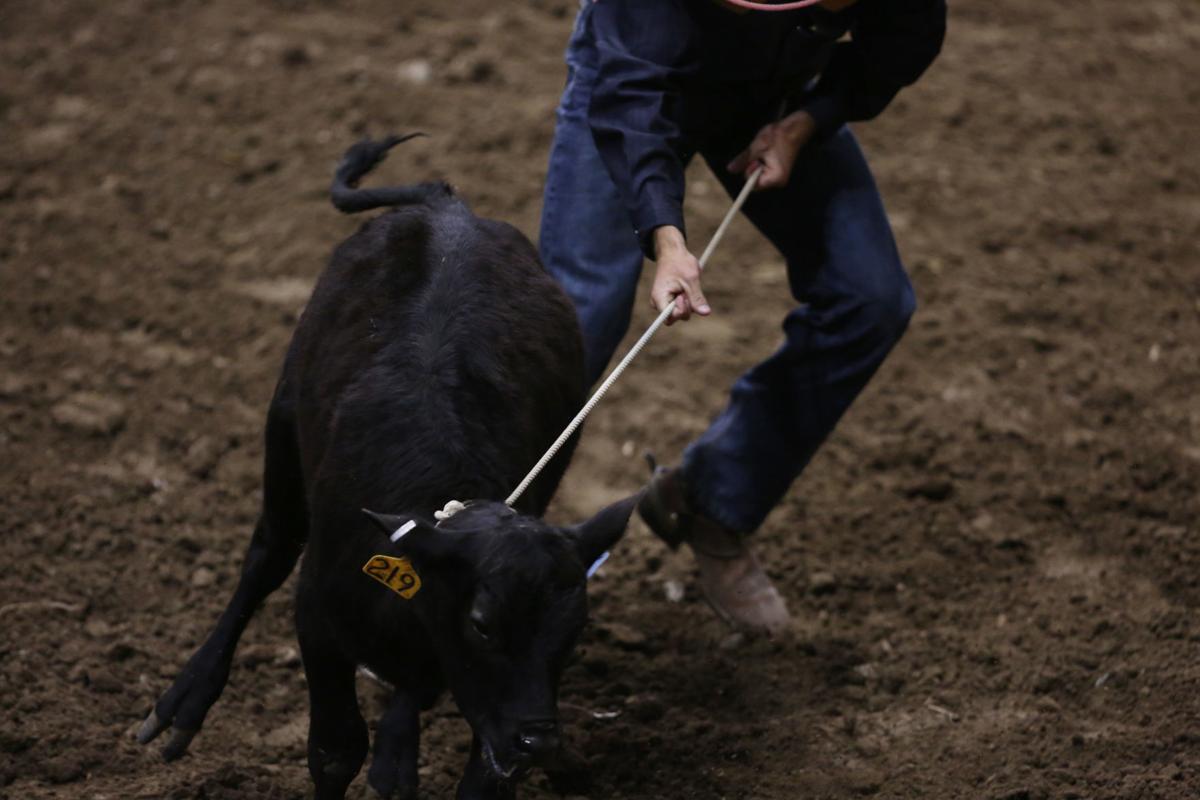 Levi Delamarter of Montana State competes in tie-down roping at the College National Finals Rodeo on Wednesday at the Ford Wyoming Center in Casper.

Levi Delamarter of Montana State competes in tie-down roping at the College National Finals Rodeo on Wednesday at the Ford Wyoming Center in Casper.

CASPER, Wyo. — With his 8.7-second performance on Friday night, Caleb Berquist of Montana State cemented himself into first place in the average, heading into the tie-down roping final go-round at the College National Finals Rodeo on Saturday at the Ford Wyoming Center.

The calf burst out of the gate and started running toward the right, but Berquist anticipated the move. Berquist tossed the rope around the calf's neck, with the calf running with total momentum, yanking the calf back into Berquist's arms.

He grabbed the calf by its sides, tossed him onto the dirt — in the same vein that a butcher would throw a steer onto its butcher's block — and tied him up. On a night when six competitors failed to record a time, Berquist shined with the fastest time on Friday.

The first-time college finals contestant has been stellarly consistent, posting identical times in each of his runs: 8.7, 8.8 and 8.7 seconds for a 26.2 average. And he has to be; he comes from a highly competitive region.

"You got to knock a lot of them down," he said. "There's 15 guys trying to chase number one all the time, so you have to stay smooth, stay consistent, making sure you get a lot of roping in."

The junior ag-business major from LaCrosse, Washington, rides an 11-year old horse named Hefty and credits him when it comes time to getting reps in — on average four to five times a week.

"I think he has excelled my game tremendously," Berquist said. "Without him, I don't think this would've been possible. I'm hoping he can last my whole life."

And excellence is going to be the name of the game Saturday night. The lead has changed practically with every go-round. Ladd King and Macon Murphy have exchanged leads, with Garrett Jacobs, fellow Bobcat Levi Delamarter and Collin Palmer closely trailing behind.

Berquist leads Murphy by 3.1 seconds and King by 6.4. Delamarter, a junior from Longview, Washington, is 8.1 seconds from the lead.

King and Murphy haven't been as consistent as Berquist, but it could all change with the right calf and precision. Murphy, who had the lead on Thursday night, expected to get bumped before the short go-round.

"I'm not going to let the highs get too high, and the lows get too low," Murphy said earlier during the week.

And King hopes he's saved his best performance for last. When asked about his performance earlier in the week, he anticipated something a little different.

"I expected it to be a lot better," King said. "A couple of mistakes kind of upset me, but in the end, it'll be alright."

But Berquist is happy to be where's at, in first place, as he tries to become MSU's first national tie-down roping champion (Casey Currey was runner-up in 2006).

"It's been an awesome-amazing ride so far," he said. "I'm just going to go in there and try to stick to my same plan — don't back off the start, make sure we get a rope around the neck and we'll go from there."

CASPER, Wyo. — The Montana State women's rodeo team increased its lead to more than 100 points Friday heading into the short go at the College…