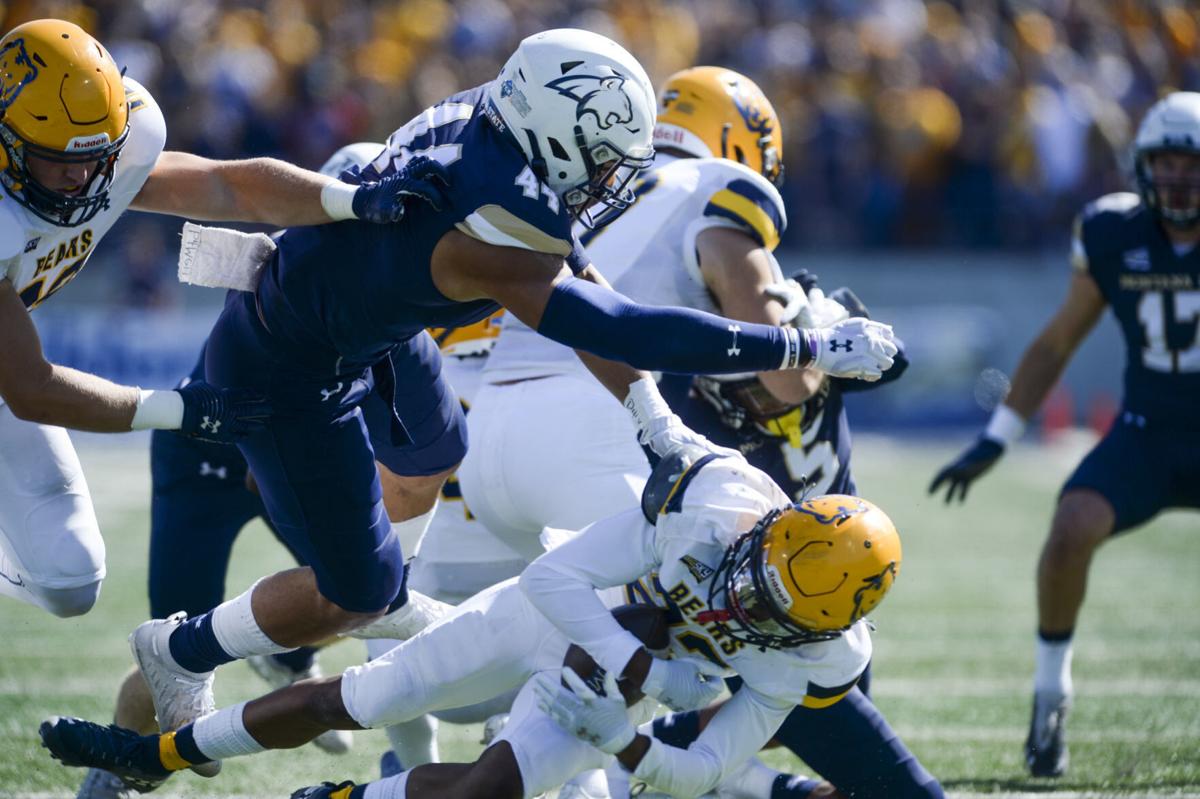 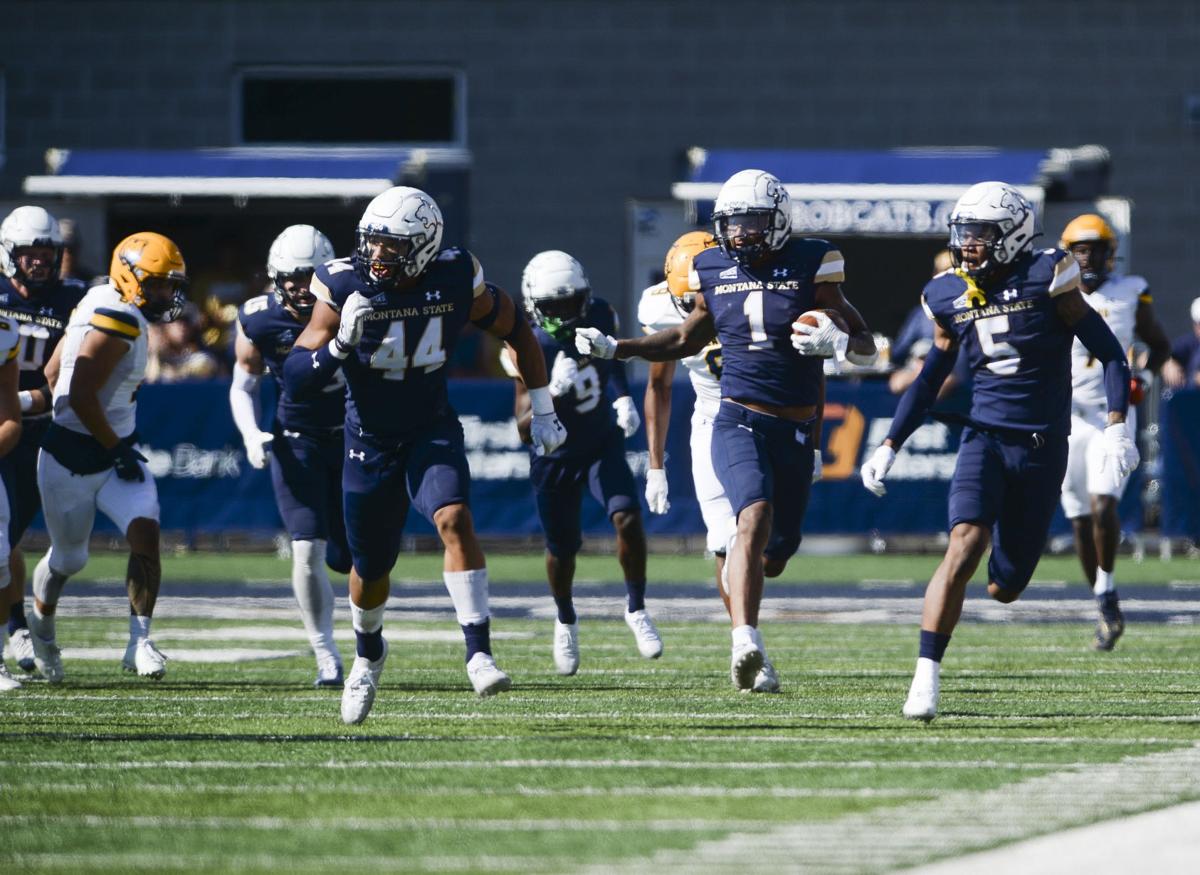 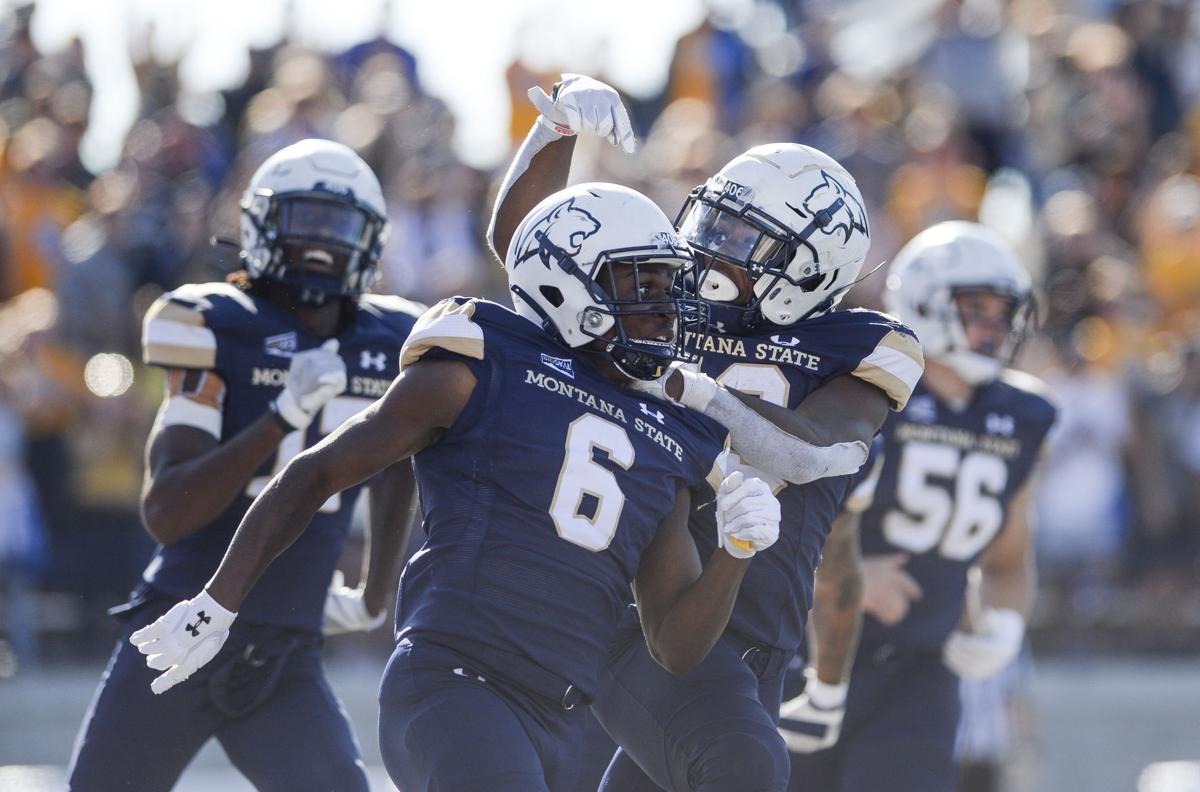 Montana State running back Elijah Elliott celebrates with teammate Andrew Patterson (6) as Jaden Smith and Cole Sain (56) look on after Patterson scored a touchdown against Northern Colorado on Oct. 2 at Bobcat Stadium in Bozeman. 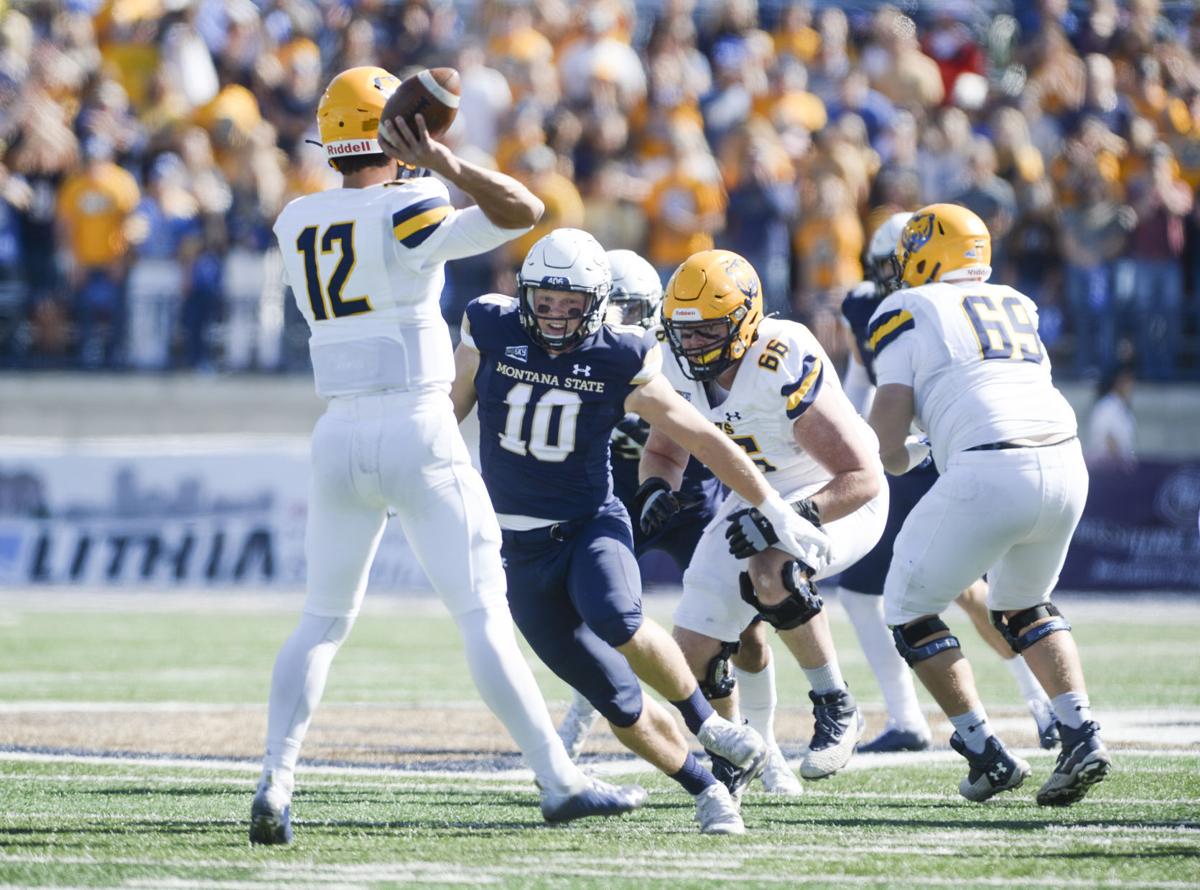 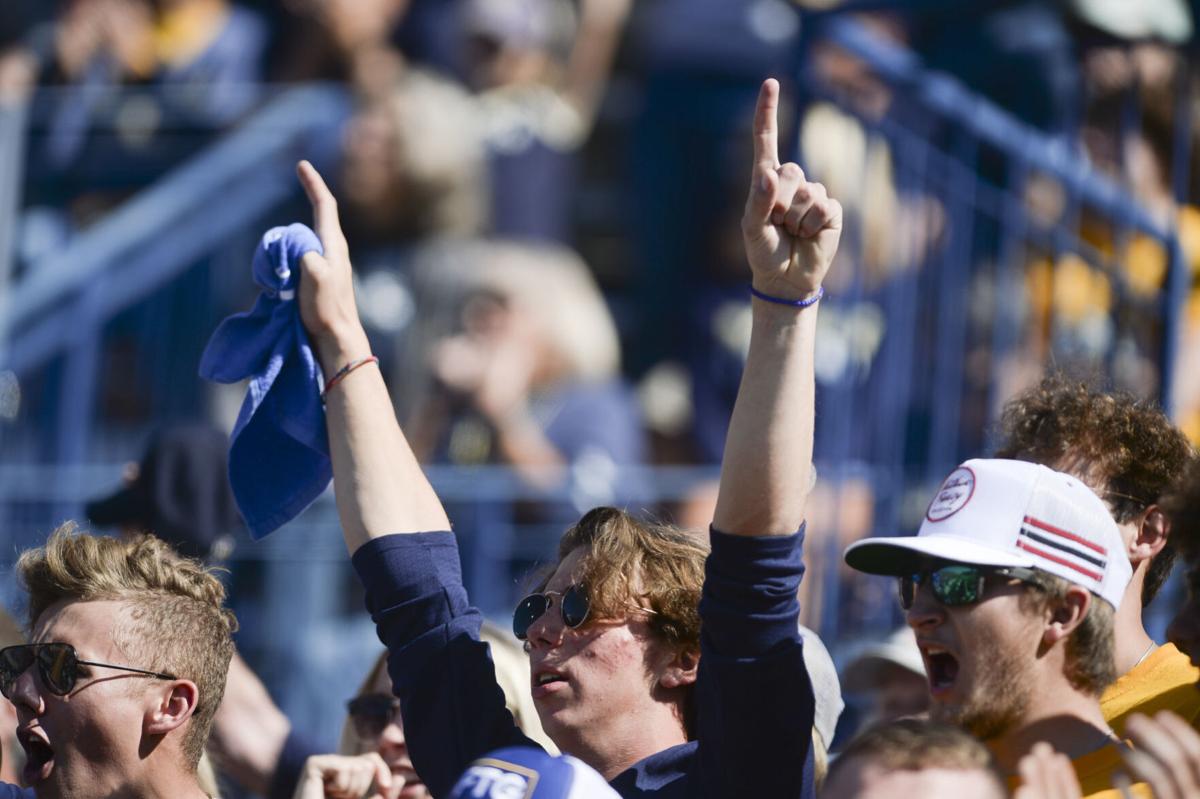 A Montana State student celebrates a play against Northern Colorado at Bobcat Stadium on Saturday.

Montana State running back Elijah Elliott celebrates with teammate Andrew Patterson (6) as Jaden Smith and Cole Sain (56) look on after Patterson scored a touchdown against Northern Colorado on Oct. 2 at Bobcat Stadium in Bozeman.

A Montana State student celebrates a play against Northern Colorado at Bobcat Stadium on Saturday.

BOZEMAN — The Northern Colorado football team had a first down and goal from Montana State’s 3-yard line early in the fourth quarter. MSU was up 40-7, so the win was all but assured.

The Bobcats had played a mostly flawless game up to that point, and they wanted to prevent a rare blemish.

MSU did just that, thanks in part to a couple dropped passes and a tough, motivated defense. With the student section right behind them, the Bobcats made a stop on third down from the 1-yard line, and Ty Okada intercepted a Dylan McCaffrey pass one play later.

Okada and the intended UNC receiver both got hands on McCaffrey’s pass. The redshirt junior nickelback wrestled it away.

“Any time you’re playing football, you only have so many opportunities, so you just make the most of all of them,” MSU linebacker Callahan O’Reilly said after the game. “Even at the end of the game, you want to just keep getting better and better and make sure you’re pushing yourself to do your best.”

“That’s a better team than Drake and San Diego, who we also got big wins against,” O’Reilly said. “That was for sure one of our better performances.”

MSU, which was favored by 21½ points, couldn’t have been more balanced on offense, finishing with identical totals in rushing yards and passing yards at 276 apiece (on 42 rushes and 23 passes).

The defense was just as impressive, if not more so, holding UNC to 233 yards on 63 plays. Okada’s interception, the second of his season and career, was the third turnover forced by the Bobcats. O’Reilly and Eric Zambrano both picked McCaffrey off as well.

Those first two interceptions were pivotal.

Junior quarterback Matthew McKay completed a 16-yard touchdown pass to senior Lance McCutcheon to put the Bobcats up 7-0 with 10:31 left in the first quarter. It was MSU’s second opening drive score this season (the other was a touchdown against San Diego on Sept. 18).

Wow, what a throw as @mccutcheonlance grabs his 4th TD of the year! 👏

On the ensuing kickoff, MSU starting defensive end Daniel Hardy laid out UNC returner Ty Arrington, sending a jolt through his teammates and the 20,127 fans in attendance.

“I about passed out because I was yelling so loud. I was like, ‘Holy cow, I’ve got to calm down a little bit,’” O’Reilly said. “It definitely gets the team going. It’s really cool to see someone who’s a big-time player for us taking so much pride in a special teams role and doing an amazing job of that, too.”

O’Reilly, a redshirt junior from Bozeman, grabbed his first college interception four plays later, and it led to a 10-yard touchdown on a sweep from McCutcheon, also a Bozeman grad. It was the first rushing touchdown of McCutcheon’s MSU career.

ANOTHER TOUCHDOWN for @mccutcheonlance, this time on the ground! 🔥

“I haven’t really gotten the ball in the backfield like that, so to get one on my, I want to say, second or third time this year and run it into the end zone was really cool,” said McCutcheon, who finished with 107 receiving yards on four catches.

O’Reilly was McCutcheon’s quarterback with the Hawks and transitioned to linebacker after his freshman year at MSU.

“It makes me feel good to see one of my best friends from high school balling,” McCutcheon said. “When he made the move after his freshman year, I knew he was going to be great at that position.”

The Bobcats were up 17-0 after one quarter, with a 178-20 advantage in total offense, and they built their lead to 20-0 in the second quarter on Blake Glessner’s second field goal.

“We knew with the nature of their defense, we had to come out and run the football, and we did that,” said MSU head coach Brent Vigen. “It changed the complexion of how they played really the rest of the game. They played us quite a bit different than they had (against) their previous four opponents. We really set the tone well.”

UNC scored its first points with 2:06 left in the first half on a seven-yard pass from McCaffrey, a Michigan graduate transfer, to Kassidy Woods, a Washington State transfer.

The Bears looked primed to score again in the final minute. That’s when Zambrano, a sophomore cornerback, nabbed his first career interception, which he returned 39 yards into UNC territory with 33 seconds left in the half.

“It felt unreal, very shocking, but I know I can make those plays,” Zambrano said. “There’s only more to come.”

Nineteen seconds later, junior Isaiah Ifanse rushed for a 17-yard TD run to put the Bobcats up 27-7 at halftime.

MSU’s lead grew to 40-7 through three quarters, thanks to two more Glessner field goals and a 44-yard TD pass from McKay to true freshman receiver Andrew Patterson. It was Patterson’s first catch and first touchdown of his MSU career.

Andrew Patterson with the touchdown! Cats up 40-7. pic.twitter.com/QWkj4zlTe9

Patterson got playing time largely because redshirt junior receiver Coy Steel was out due to an injury he suffered last week. McCutcheon said Patterson had “a nervous grin” before he entered Saturday’s game, and he told Patterson, “Be ready for the ball,” on the play that ended with Patterson in the end zone.

“I think that was his second play as a collegiate player, and he gets a touchdown,” Vigen said with a smile. “Andrew has kind of been waiting in the wings all through fall camp and these first several games and hasn’t been on the field, so what a way to break into college football. I think we’ll see more of Andrew Patterson moving forward.”

Thanks to that goal line stand early in the fourth quarter, the Bobcats tied their lowest points allowed in a game this season. They beat Drake 45-7 on Sept. 11, and the most points an opponent has scored against them through five games is 19 from Wyoming, which won 19-16 in both teams’ season opener. MSU gave up 17 points in last week’s 13-point win at Portland State, and it beat San Diego 52-10 a week earlier.

“That’s got to be our foundation, being able to stop the run and really get after the quarterback, and I thought we did that pretty well today,” Vigen said.

McKay finished 15 of 23 for 276 yards, the TD to McCutcheon and no turnovers. Ifanse rushed for 114 yards and the one TD on 20 carries, and freshman Elijah Elliott added 107 yards on 11 rushes. Redshirt freshman Jaden Smith had the best game of his MSU career, finishing with 75 yards on five receptions.

Okada finished with 10 tackles (two for loss), and senior Troy Andersen had added five (three for loss). The Bobcats didn’t record a sack but pressured McCaffrey throughout the game, including on both O’Reilly’s and Zambrano’s interceptions.

Anderson didn’t play in the second half, although he remained in full pads and walked normally on the sideline. Vigen didn’t talk about Andersen’s playing time in his postgame press conference.