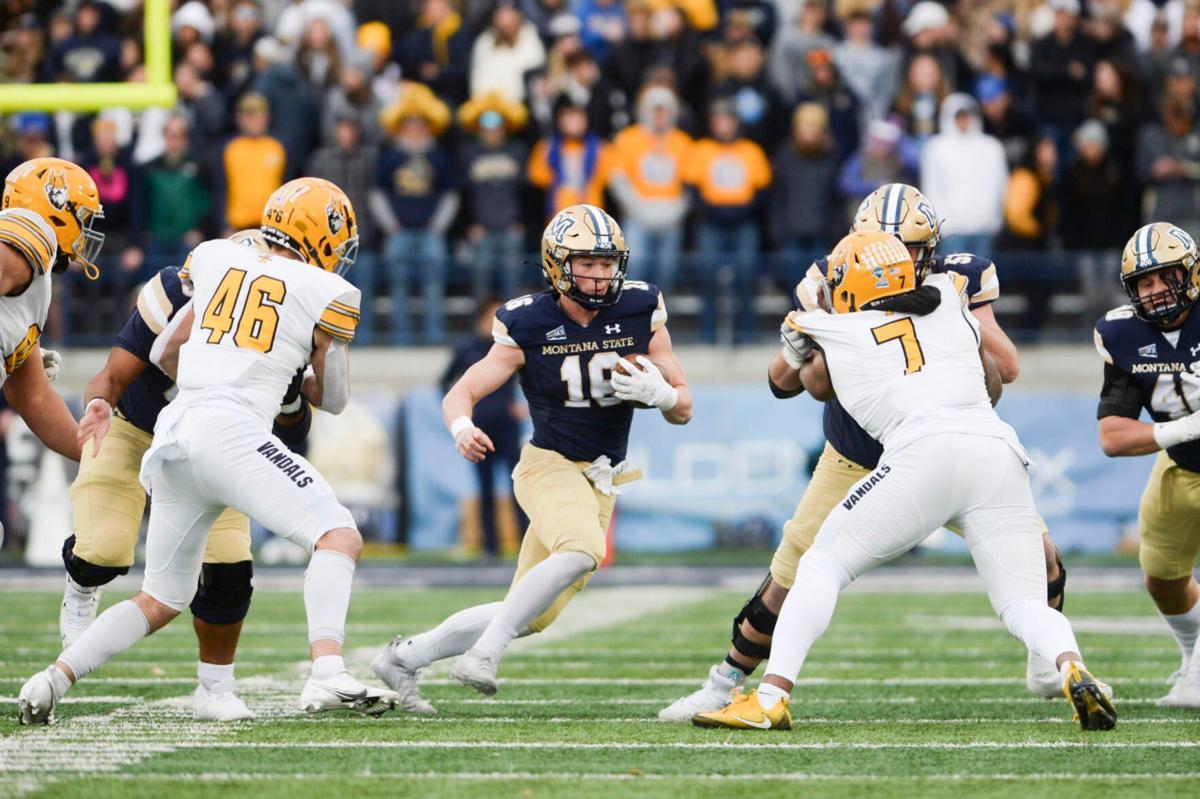 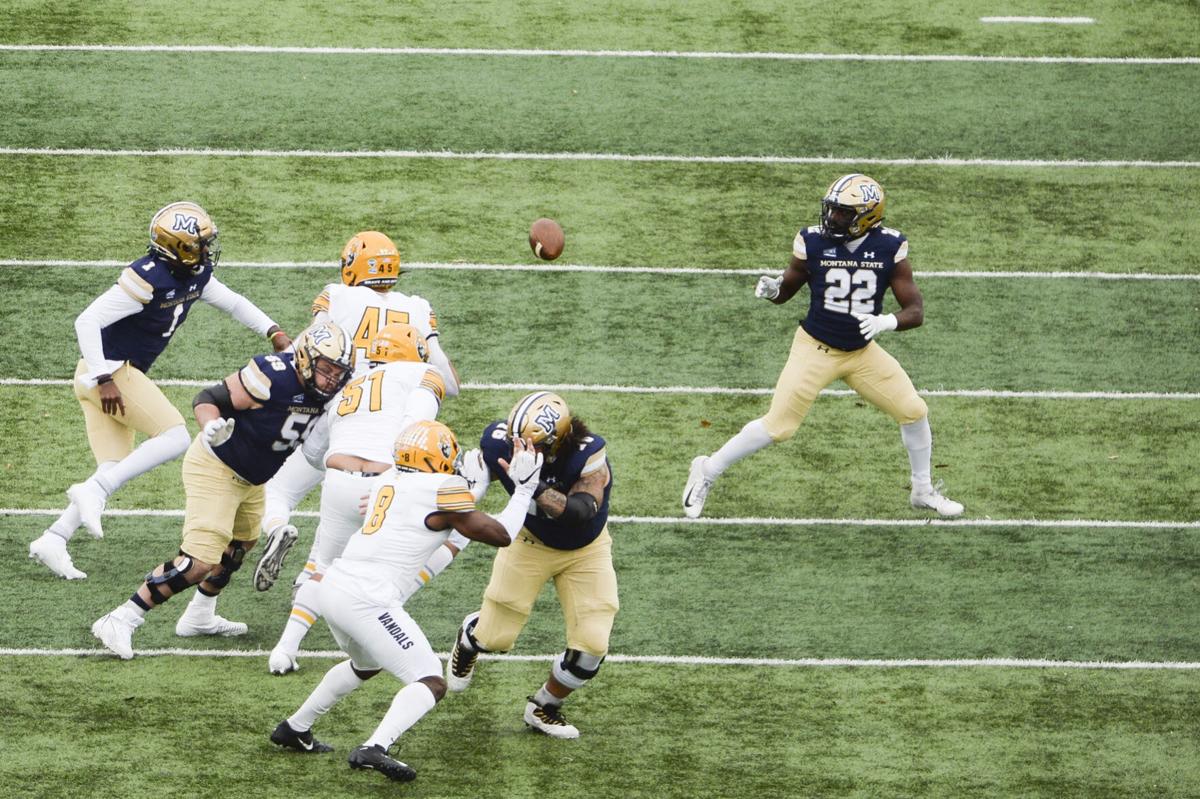 Montana State quarterback Matthew McKay pitches the ball to running back Isaiah Ifanse as linemen Zach Redd (59) and Lewis Kidd (76) block during their game against Idaho at Bobcat Stadium on Saturday, Nov. 13, 2021. 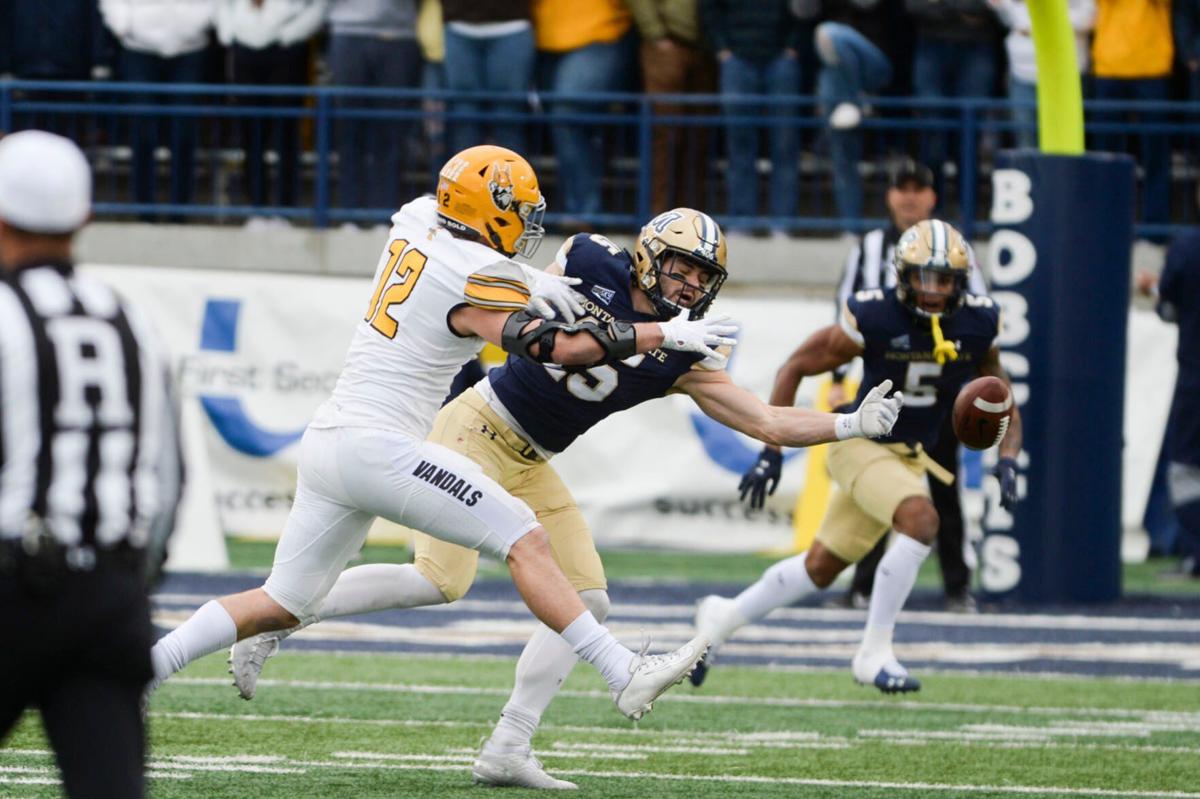 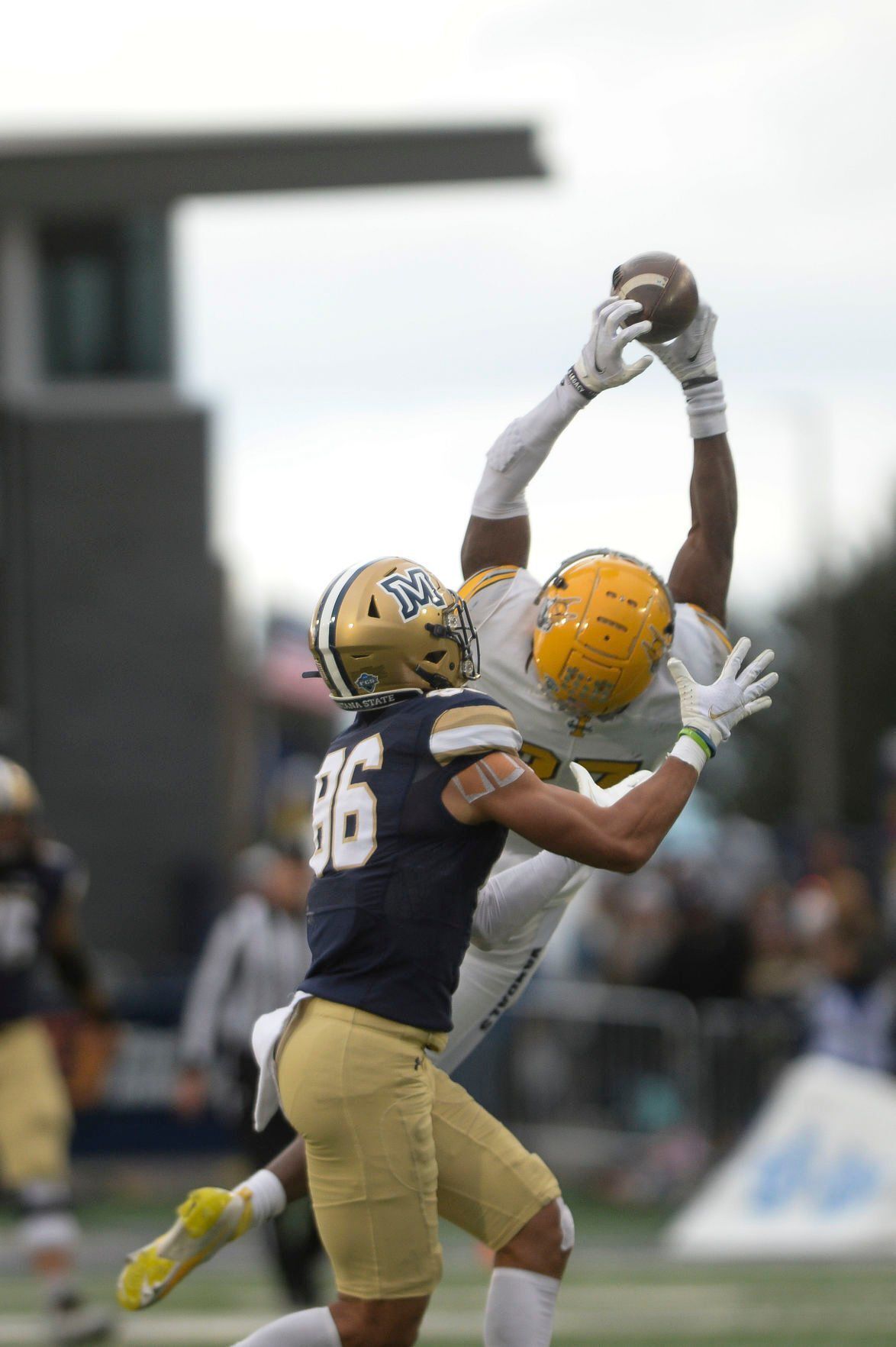 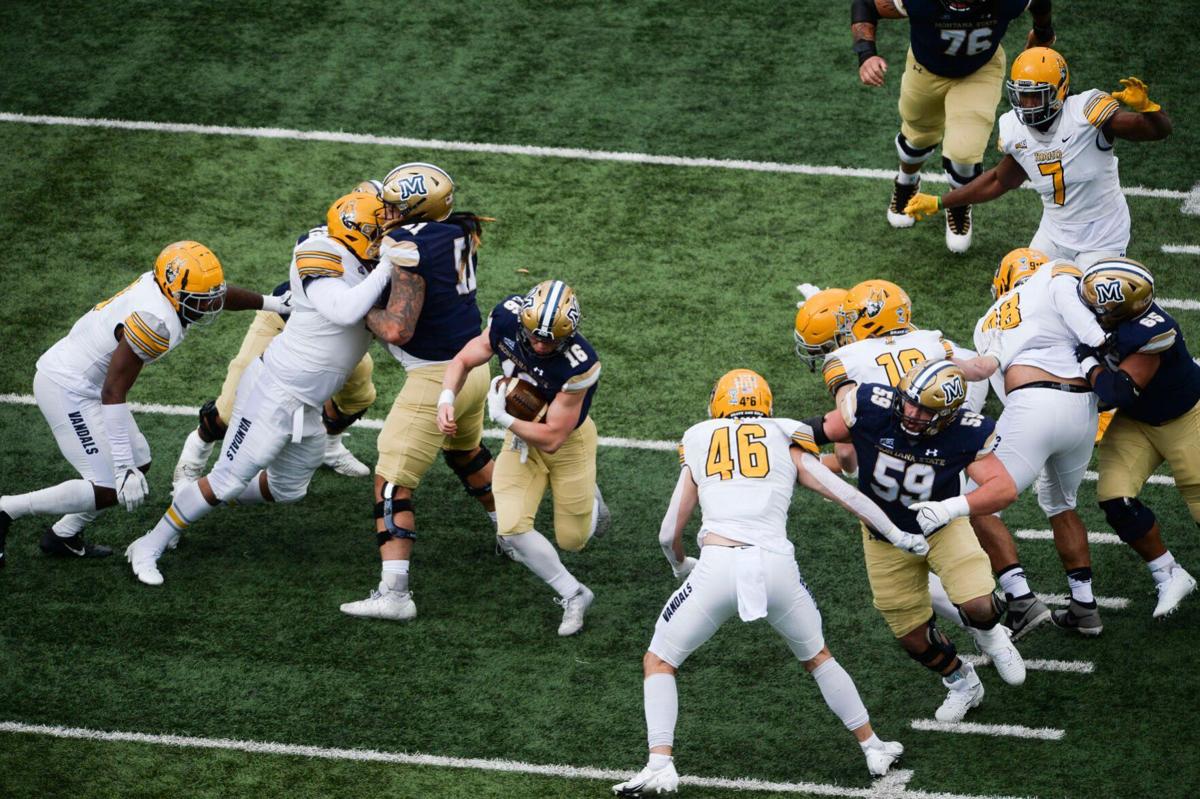 Montana State quarterback Tommy Mellott runs the ball for a touchdown during a game against Idaho at Bobcat Stadium on Saturday, Nov. 13, 2021. 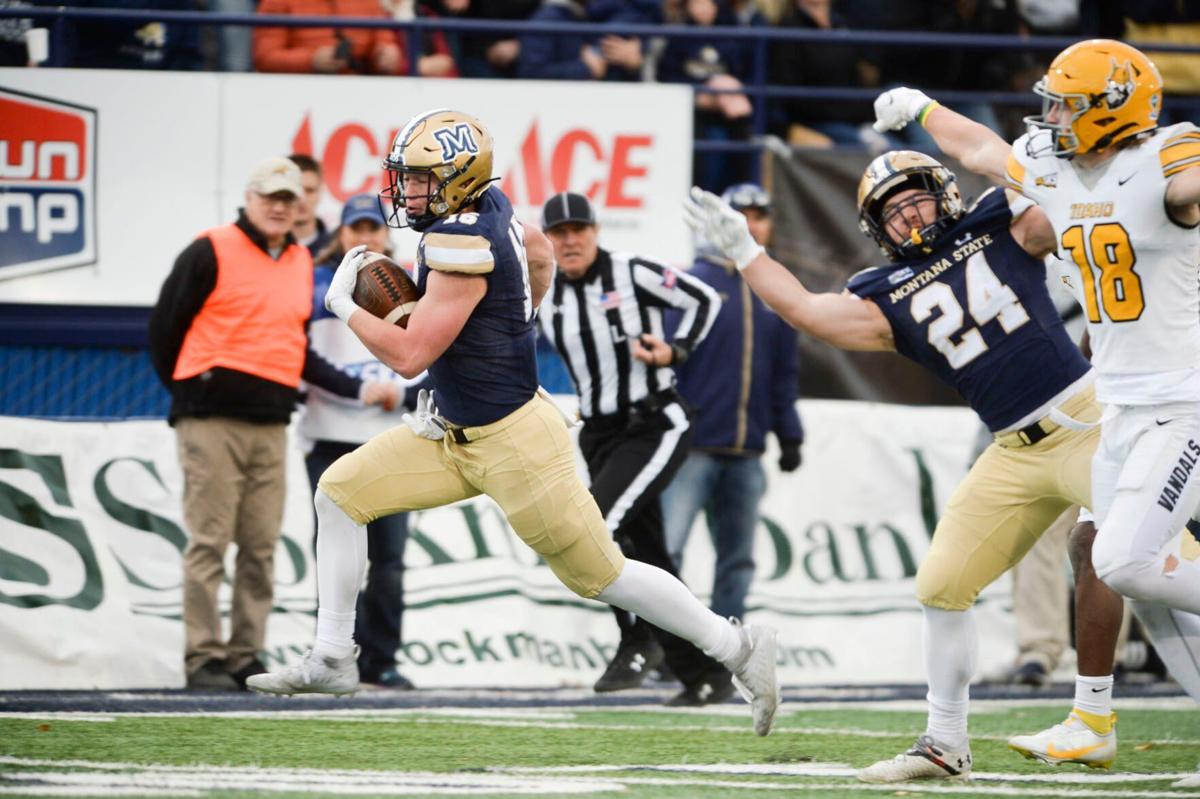 Montana State quarterback Tommy Mellott runs the ball in for his second touchdown of a game against Idaho at Bobcat Stadium on Saturday, Nov. 13, 2021. 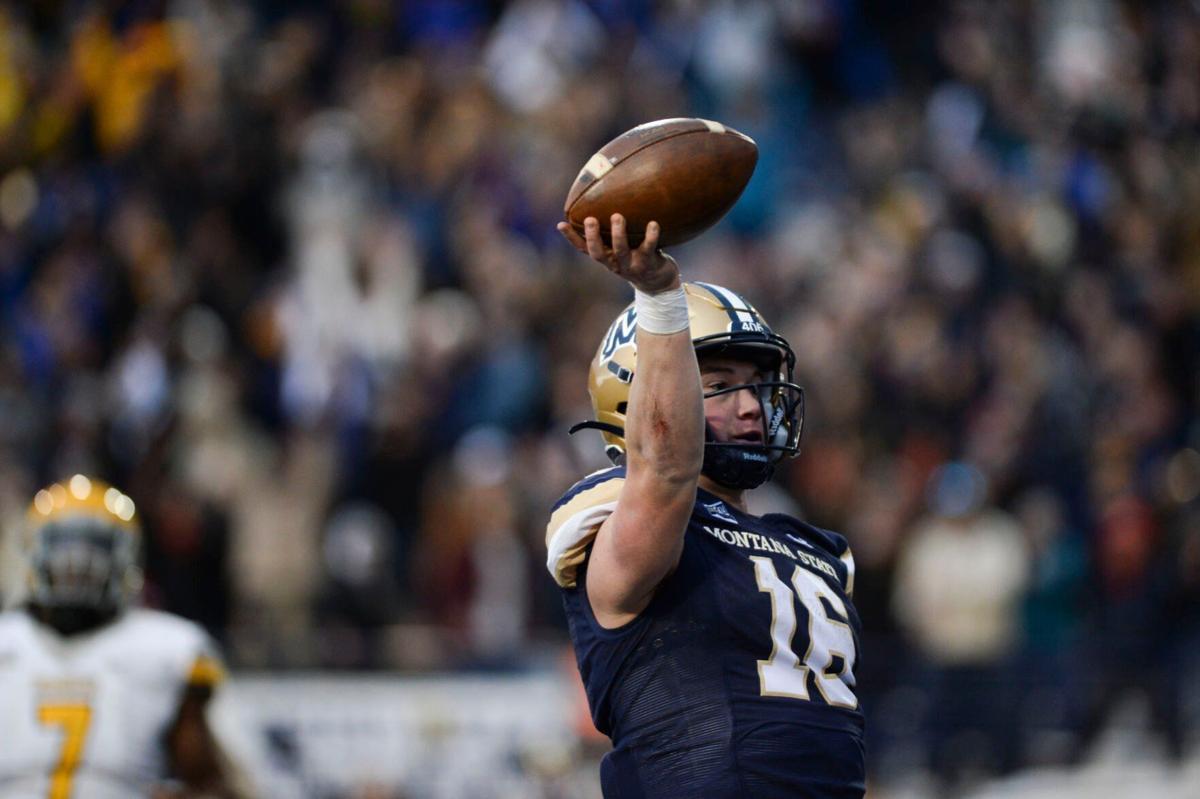 Montana State quarterback Tommy Mellott celebrates his third touchdown of a game against Idaho at Bobcat Stadium on Saturday, Nov. 13, 2021.

Montana State quarterback Matthew McKay pitches the ball to running back Isaiah Ifanse as linemen Zach Redd (59) and Lewis Kidd (76) block during their game against Idaho at Bobcat Stadium on Saturday, Nov. 13, 2021.

Montana State quarterback Tommy Mellott runs the ball for a touchdown during a game against Idaho at Bobcat Stadium on Saturday, Nov. 13, 2021.

Montana State quarterback Tommy Mellott runs the ball in for his second touchdown of a game against Idaho at Bobcat Stadium on Saturday, Nov. 13, 2021.

Montana State quarterback Tommy Mellott celebrates his third touchdown of a game against Idaho at Bobcat Stadium on Saturday, Nov. 13, 2021.

BOZEMAN — Tommy Mellott’s nickname was already circulating among Montana State football fans and players. On Saturday, they got three more reasons to chant it.

Mellott, a freshman quarterback from Butte, rushed for all three of MSU’s touchdowns in a 20-13 win over the Vandals on Saturday at Bobcat Stadium. He and another strong defensive performance prevented Idaho (3-7, 2-5 Big Sky) from upsetting No. 3-ranked Bobcats (9-1, 7-0) on senior day, one week before the 120th Brawl of the Wild.

“Idaho played a good four quarters. We just fought through,” Mellott said. “Everyone was doing their 1/11th, and at the end of the day, I just try to do my 1/11th. A couple times, they all added up.”

Mellott’s first TD came on a nine-yard run up the middle to put the Bobcats ahead 7-0 with 3:38 left in the first quarter. He gave them a 13-3 lead early in the second quarter on a 23-yarder, sparked by an impressive spin move.

“He certainly injected what we needed today,” said MSU head coach Brent Vigen. “He’s certainly one of our top runners, and he’s going to find a way to make that first guy miss and find the end zone.”

Tommy Mellott takes it himself and finishes off a 78-yard drive.

Tommy finds his way into the end zone again!!

At that point, MSU looked well on its way to covering its 21 ½-point spread and allowing its 19 seniors to savor a stress-free win. Instead, the Bobcats hit one of their worst stretches of the season.

Idaho blocked Blake Glessner’s PAT following Mellott’s second TD to keep the score at 13-3. The Vandals capped a six-play, 74-yard drive with a 30-yard TD pass from Zach Borisch to Terez Traynor with 34 seconds left in the first half.

At the 50-yard line with three seconds to go in the half, MSU starting QB Matthew McKay dropped back for a Hail Mary, and he was sacked hard by Kemari Bailey. Bailey hit McKay right into the left leg of MSU right tackle TJ Session, who spent minutes on the field in pain. He walked gingerly off the field and came back to the field in the third quarter, walking on crutches and wearing a boot on his left leg. Rush Reimer filled in for Session during the second half.

Kemari Bailey caps off the half with an exclamation point! pic.twitter.com/gmRVoDQ7gy

MSU running back Isaiah Ifanse rushed nine times for 84 yards (9.3 yards per carry), which pushed him past 3,000 career rushing yards and ahead of Steve Kracher for the third-most rushing yards in program history. But the junior got hurt during that final drive of the first half and stood on the sideline without pads for the entirety of the second. His backup, Elijah Elliott, suffered what appeared to be a left leg injury in the third quarter and missed the rest of the game.

MSU starting “X” receiver Jaden Smith was also out with an injury he suffered earlier in the week, Vigen said. The injuries to Ifanse, Session and Elliott are “nothing season-ending by any nature,” Vigen said.

Without those key players, MSU’s offense struggled for most of the second half. McKay finished 9 of 14 for 104 yards, with an interception early in the second quarter that he threw into heavy coverage when the Bobcats were at Idaho’s 21.

McKay threw five times in the second half and rushed once. He handed off often and stood on the sideline for many plays as Mellott called the signals.

Mellott didn’t play in MSU’s 23-20 win at then-No. 5 Eastern Washington last week. Vigen said the plan was to get him in more Saturday, regardless of McKay’s performance.

Mellott finished with 68 yards on 13 rushes (5.2 ypc), and he completed 1 of 2 passes for two yards. The incompletion was a deep pass to Lance McCutcheon (three catches, 61 yards) that was nearly picked off.

The score was knotted at 13-13 and Idaho was at MSU’s 31 to start the fourth quarter. The defense stood stout, and Idaho punted.

The Bobcats badly needed to at least get into better punting position, and they did, thanks mainly to Mellott and running back Lane Sumner. The replacement for Ifanse and Elliott finished with 46 yards on 14 carries (3.3 ypc).

Reigning Big Sky special teams player of the week Bryce Leighton punted to Idaho’s 10, and MSU’s defense stepped up again, forcing a punt that went out of bounds at Idaho’s 37. Sumner and Mellott drove the Bobcats close to the goal line, and Mellott delivered the game-winning TD on a three-yard, third-down run into the Sonny Holland end zone, where the student section showered him with cheers.

“That was something else,” Mellott said. “Growing up, I got to see a lot of guys do that. It gives you chills.”

“He’s got a lot of it, I know that, and I’m sure that’s a lot to do with where he comes from,” Vigen said. “He scored that first touchdown, and he ran down on the next kickoff. I think we got that fixed after that, where he didn’t run down on kickoffs after that. But just appreciate his willingness to do whatever the team needs.”

Andersen finished with a game- and career-high 17 tackles, while senior defensive ends Daniel Hardy and Amandre Williams had 1 ½ sacks, and Chase Benson had one sack. Brody Grebe and Sebastian Valdez combined for a sack on fourth down with about a minute left to seal the win.

“We’d want it to look prettier, but it didn’t,” Vigen said. “We found a way in the fourth quarter to, sequentially, put the defense, the special teams, the offense all together and find a way to win the game.”

Andersen knows what it’s like to play QB for the Bobcats and run into the Sonny Holland end zone. He rushed for an MSU-best 21 TDs in his all-American 2018 season.

“I don’t know if I compare myself to Troy Andersen. That guy’s something else,” Mellott said. “Just trying to use my athleticism best for the team, and that’s where they see me. I’m just grateful for that.”

As MSU’s players sang their fight song with the students, Billy Idol’s “Mony Mony” played over the Bobcat Stadium speakers, and fans sent their usual not-so-friendly message to their rival.

Next Saturday, No. 9 Montana will host MSU for the 120th Brawl of the Wild, the first since 2019 because COVID-19 canceled it last year. The Bobcats will try to win the Great Divide Trophy for the fifth straight season.

“We’re always looking forward to being able to take it to those guys over the hill,” Hardy said.

Montana State hosted Idaho for their senior day celebrations. Take a look at what you may have missed from the week.