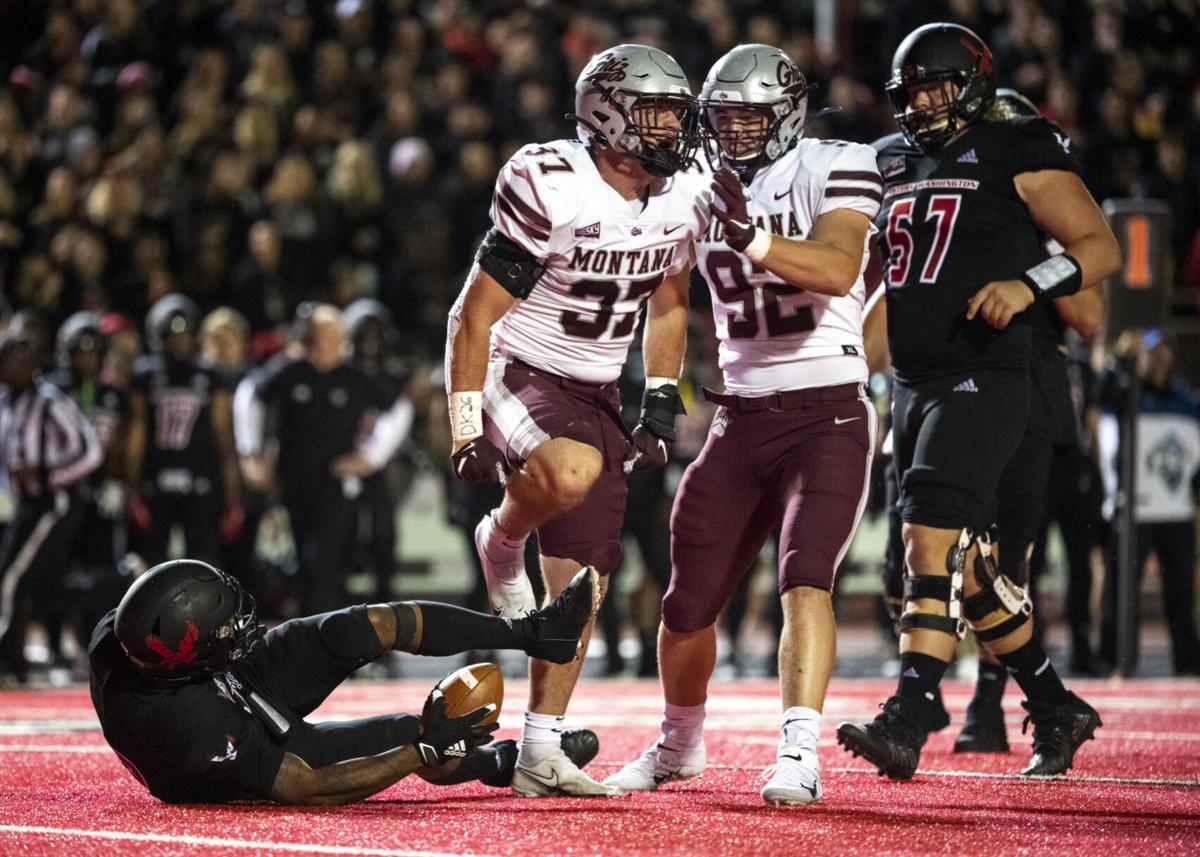 Montana senior linebacker Jace Lewis (37) and freshman defensive end Jacob McGourin (92) celebrate after Lewis sacks Eastern Washington quarterback Eric Barriere on Oct. 2 in Cheney, Washington. Lewis and the Griz are looking to beat in-state rival Montana State for the first time in their careers when the teams meet up at noon Saturday at Washington-Grizzly Stadium in Missoula. 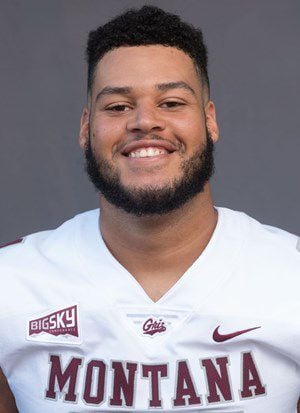 The Griz are trying to get back on the right track in the rivalry after losing four in a row from 2016-19 before the 2020 game was canceled. UM’s 2019 senior class finished 0-4 against MSU, while the Cats seniors that year went 4-0, something that hadn’t happened since 1977, when MSU won for the sixth time in a row.

“I know the two (games) that stick in my mind the most, and they’re the most recent ones, and we’re just trying to right that ship,” said Montana senior right tackle Dylan Cook, a Butte grad who’s been on the team for only two Cat-Griz games since he transferred to UM.

While Montana has lost four straight games in the series, the first two of those came under former coach Bob Stitt. The past two have come under current coach Bobby Hauck, who's 5-4 in the series while leading UM.

The past four losses in the series were all doled out by then-MSU coach Jeff Choate, who left to be the co-defensive coordinator for the Texas Longhorns. He was replaced by Brent Vigen, who was previously Wyoming's offensive coordinator and spent the majority of his career at North Dakota State.

“We’ve dropped the last two to these guys, so we need a win,” Hauck said. “That’s what it is. I think they’re good up front on both sides of the ball. That’s where it starts. Should be a heck of a game.”

Montana State senior linebacker Troy Andersen watched the seniors in 2019 celebrate a 4-0 record against the Griz while he sat out of that game. The Dillon grad would love to go out on top in his final rivalry game and first time playing in one since 2018.

“Being your senior year, you want to go out with a win,” he said. “To be able to say that you haven’t lost to them is something that the last group of seniors was able to say, and I want to add my name to that list, for sure.”

This is the first time since 1925 that the Cat-Griz game is being played in Missoula on an odd-numbered year.

That’s because the pandemic forced the postponement and then cancellation of the game in 2020. The Big Sky moved the 2020 conference schedule to 2021, which means UM will now be hosting in odd years and MSU in even years.

That change will affect UM’s scheduling in the future. The Griz look to schedule big payday games, like this year’s trip to Washington that brought in $625,000, when the Brawl is on the road because they miss out on the home revenue from a sellout crowd for the rivalry game.

Montana State coach Brent Vigen will be experiencing the Cat-Griz rivalry for the first time. But he’s already been inside raucous Washington-Grizzly Stadium and had success there.

In 2014, Vigen was Wyoming’s offensive coordinator and quarterbacks coach when the Cowboys scored a 17-12 home over UM.

The Griz handed the Cats their first loss at Gatton Field in five years in that 1921 game. Their trips there in 1916 and 1918 ended in ties.

Butte’s Steve Sullivan gave UM a 7-0 lead with a 4-yard touchdown run, and MSU’s Ray McCarren tied the game when he ran for a score after the Cats blocked a kick and returned the ball to the 10-yard line. Stevensville’s Ted Plummer punched in a 1-yard TD run to give UM a 14-7 lead, creating the final margin.

Ray T. Rocene of the Missoulian wrote that the game was a "thrilling and viciously contested football contest as Bozeman has ever seen."

Setting the stage: A primer for perhaps the most-anticipated Brawl of them all

The anticipation is off the charts for this weekend's Brawl of the Wild, the 120th rendition in the series, after Montana and Montana State didn't get to square off in 2020.