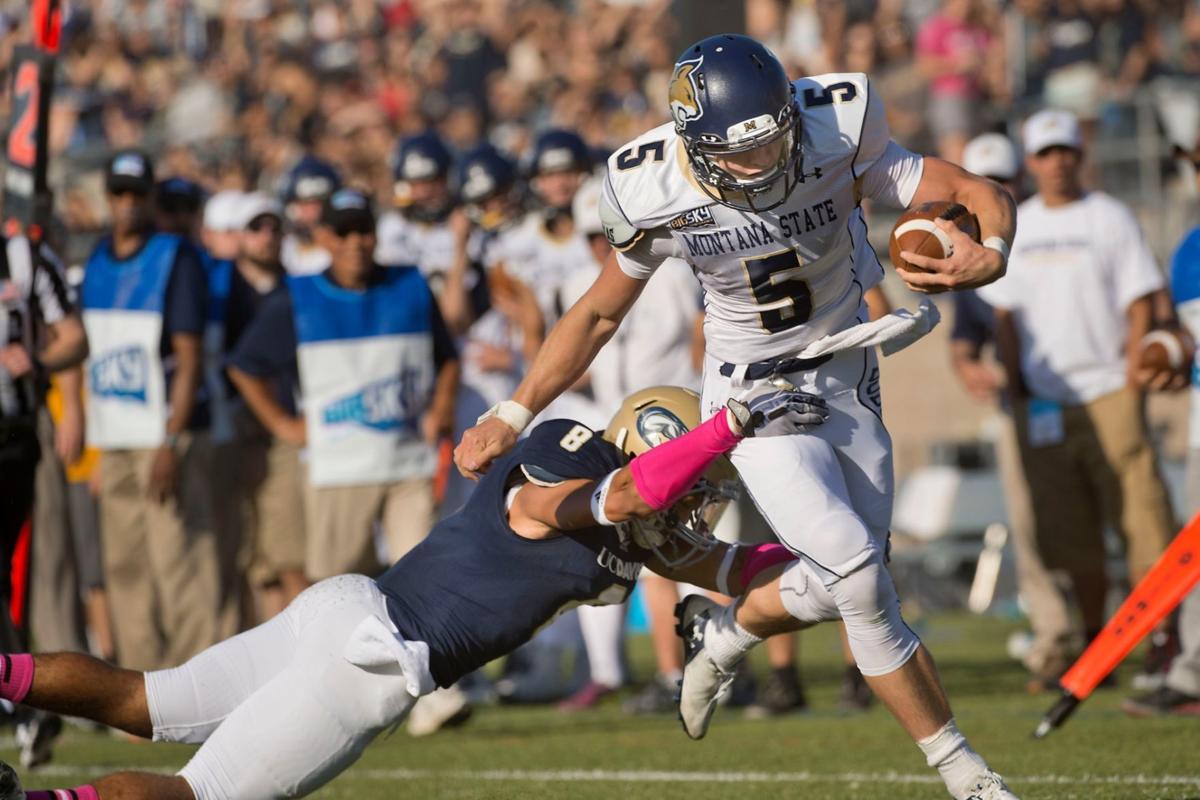 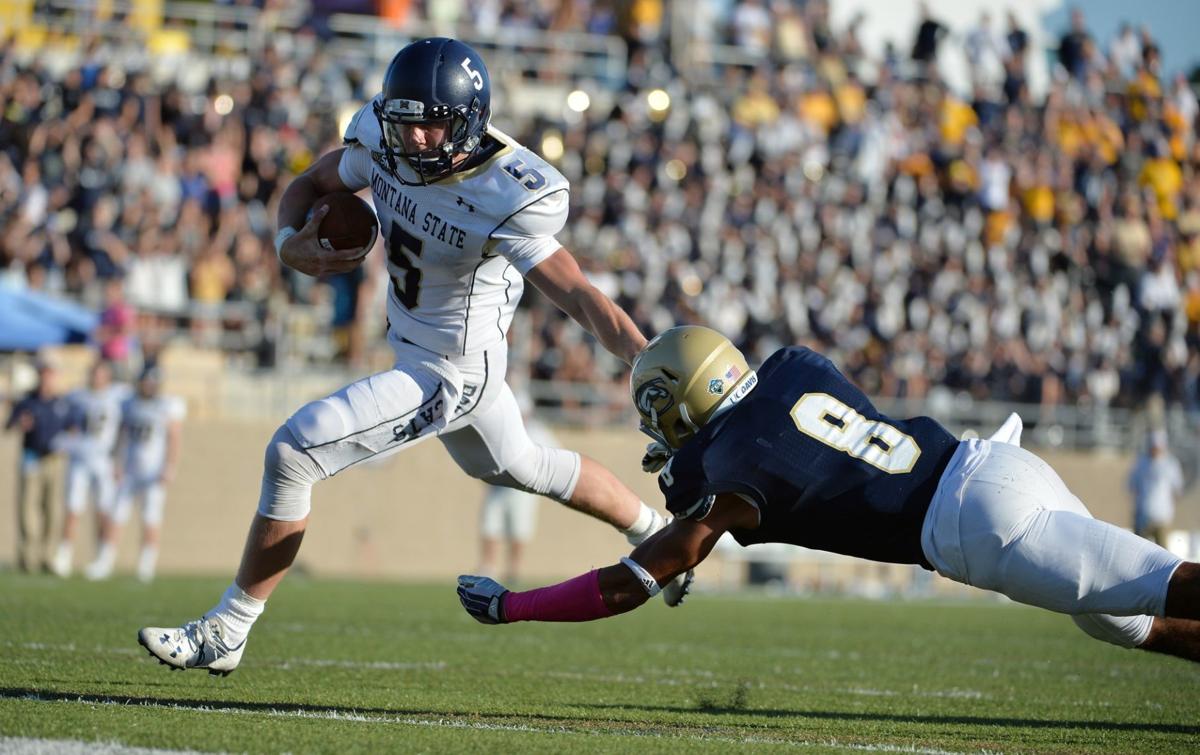 Montana State quarterback Dakota Prukop runs with the ball during a 77-37 victory at UC Davis on Oct. 11, 2014.

BOZEMAN — Dakota Prukop had so many good days as the quarterback at Montana State, but what occurred on Oct. 11, 2014, was on another level.

Not just for Prukop, but the entire offense.

It was the Bobcats’ most recent visit to UC Davis, a precursor to their upcoming trip to play the Aggies on Saturday. It was also the most productive day of offensive football the MSU program has ever experienced.

With Prukop at the controls, the Bobcats accumulated some astounding numbers, rolling up 737 yards, achieving 34 first downs and scoring 11 touchdowns on 13 possessions in a 77-37 rout. Those point and yardage totals established new school records, and Prukop accounted for 509 scrimmage yards — third-most in MSU annals — and six total touchdowns.

Prukop, who just wrapped up his third season in the Canadian Football League, still marvels at that performance, as well as the proficient play-calling of then-offensive coordinator Tim Cramsey.

“It was a brilliantly played offensive game,” Prukop recalled Wednesday during a phone interview with 406mtsports.com. “I remember that everything that coach Cramsey said would happen happened.

“Looking back now because it’s been so long, I can really appreciate Tim Cramsey’s style of game planning. He was just on fire that day.”

MSU’s first drive of the third quarter stalled after five plays and it was forced to punt, but after that came another deluge of touchdowns — a 13-yard Prukop run, 65- and 31-yard passes from Prukop to Johnson, a 23-yard pass to Gates from backup QB Jake Bleskin and a 2-yard run by Nick LaSane.

The defense also got involved, as cornerback Deonte Flowers returned an interception 38 yards for a score in the third quarter.

The only other possession that didn’t produce points was when Bleskin knelt on the ball in the waning seconds to end the game.

“Basically we kind of hopped around in a couple different formations to start off so we could see how the defense was going to play each formation, and then from there we kind of had a plan of attack,” Prukop recalled.

“I remember one of the first plays we ran was a bubble screen — I can’t remember if we threw the bubble or if the receivers just ran the bubble — and then on the next play (Cramsey was) like, ‘All right, the safety is really going to drive the bubble here.’ It was kind of a fake-the-bubble-and-throw-it-deep kind of deal.

“And sure enough, I’ve never seen a safety fly out of the middle of the field like that. Then the corner crashes it, too, and the post route was wide open. I remember being like, ‘Wow. That was insane. He was spot on.’”

The Bobcats’ offense finished the game with 331 rushing yards and 406 passing yards. It averaged 10.5 yards per snap.

In reality, it was the continuation from the previous week's 56-53 marathon win at Sacramento State in which Prukop accounted for all eight touchdowns, including a game-winning 4-yard pass to receiver Mitch Herbert with four seconds left.

The offense put up 619 yards in that game. Prukop had 348 passing with five touchdowns, and had 140 rushing with three more scores.

Following the Sac State and UC Davis games, MSU had scored 41 touchdowns to that point in the season, 18 of which had gone for 30 or more yards.

“We were grooving, man,” Prukop said. “We had everybody on board with, ‘Let’s just win. I don’t care how we get it done. Let’s just get it done.’ We had a bunch of selfless guys. That’s how we were able to put up those crazy numbers.”

The Bobcats won eight games that year and made the playoffs in what was Rob Ash’s eighth year as head coach. Prukop later tore the posterior ligament in his left knee in a game against Portland State. The season ended with a 47-40 shootout loss at home to South Dakota State, a game in which Prukop played but wasn’t 100% healthy.

Prukop rather famously (and a bit contentiously) transferred to Oregon prior to his final season in 2016. He left the Bobcats ranked No. 1 all-time in passing yards per game (242.8) and was responsible for 65 total touchdowns. His 7,347 yards of total offense rank fourth.

Ash served as MSU's coach for one more season before being let go. Cramsey moved on as well, and is now the offensive coordinator and quarterbacks coach at Marshall.

These days, under fourth-year head coach Jeff Choate and second-year coordinator Matt Miller, the Bobcats do things differently from Cramsey’s “all gas, no brakes” offense of five years ago. MSU doesn’t channel things through a star quarterback as much as it relies on a team concept built around a myriad of formations and personnel groupings.

The No. 10-ranked Bobcats make no bones about the fact that they are a run-first offense, and that’s how they will try to beat UC Davis on the road this week. It’s always just a matter of how they’ll go about it.

As Choate noted this week, MSU has run the ball with 18 different players this year, 10 of which have scored touchdowns and seven of which have eclipsed the 100-yard barrier (six in a single game). Five others have thrown touchdown passes to eight different receivers, while 17 players have made at least one catch.

But there is one common denominator that Prukop has noticed.

“I’m still thinking about making it up for Cat-Griz. We’ll see if I can swing it. It’d be great. I’d love to come see them play live again because the style of ball they’re playing right now, that’s good football.”

Prukop was packing up his belongings Wednesday morning, preparing to make an arduous drive from Toronto back home to Texas.

Prukop’s most recent CFL season ended Nov. 2 when his Toronto Argonauts lost 21-18 to the Hamilton Tiger-Cats. The Argos finished the year with a 4-14 record, but it was Prukop’s most active professional season, as he saw action in three games at quarterback.

He’ll be a free agent in February, and he hopes he can take the next step and become someone’s starter in the future. Somewhere. Anywhere.

“Whatever league that’s in, I don’t know,” Prukop said. “But as long as I’m playing football and I’m getting to throw the ball, that’s my addiction in life — watching the ball spin off my fingers. As long as I can keep doing that I’m going to be happy.”

Prukop these days says he’s a “big fan” of the Bobcats, and he’d be plenty happy to see them get another win Saturday at the site of the school’s greatest offensive showing.

No. 10 Montana State earned a road-win over UC Davis to keep their playoff hopes alive.

BOZEMAN — Jeff Choate is not one to look too far beyond the task at hand.