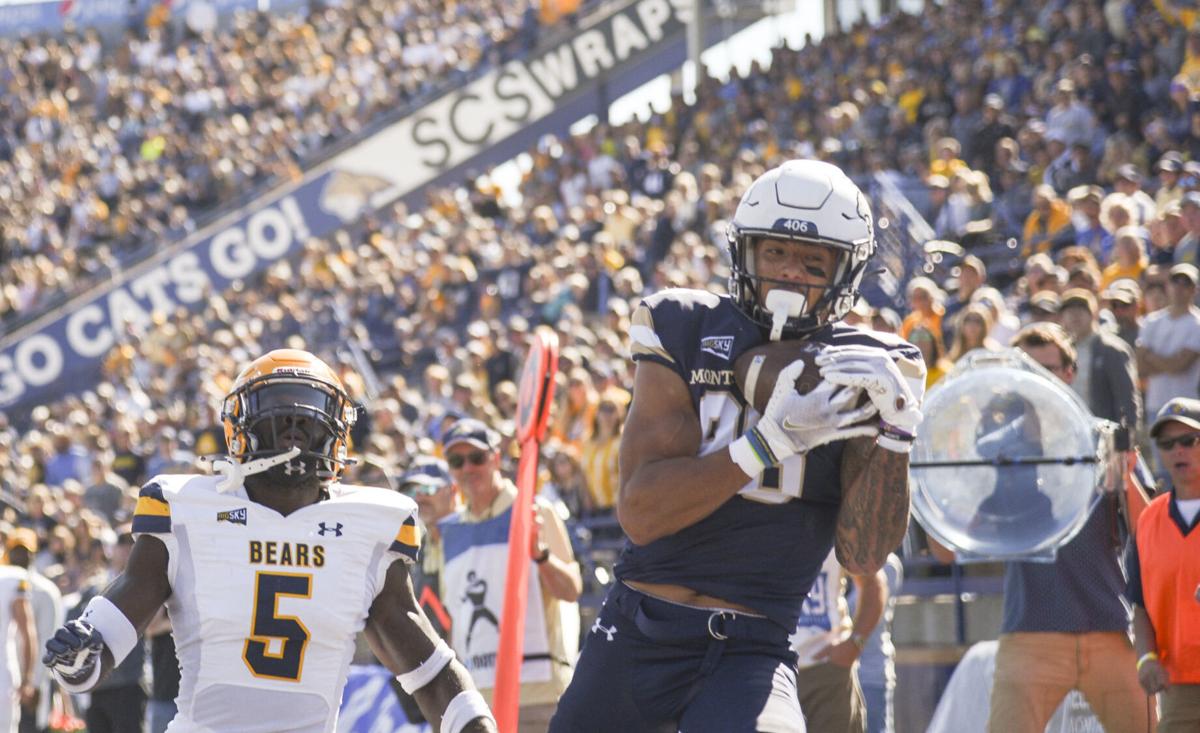 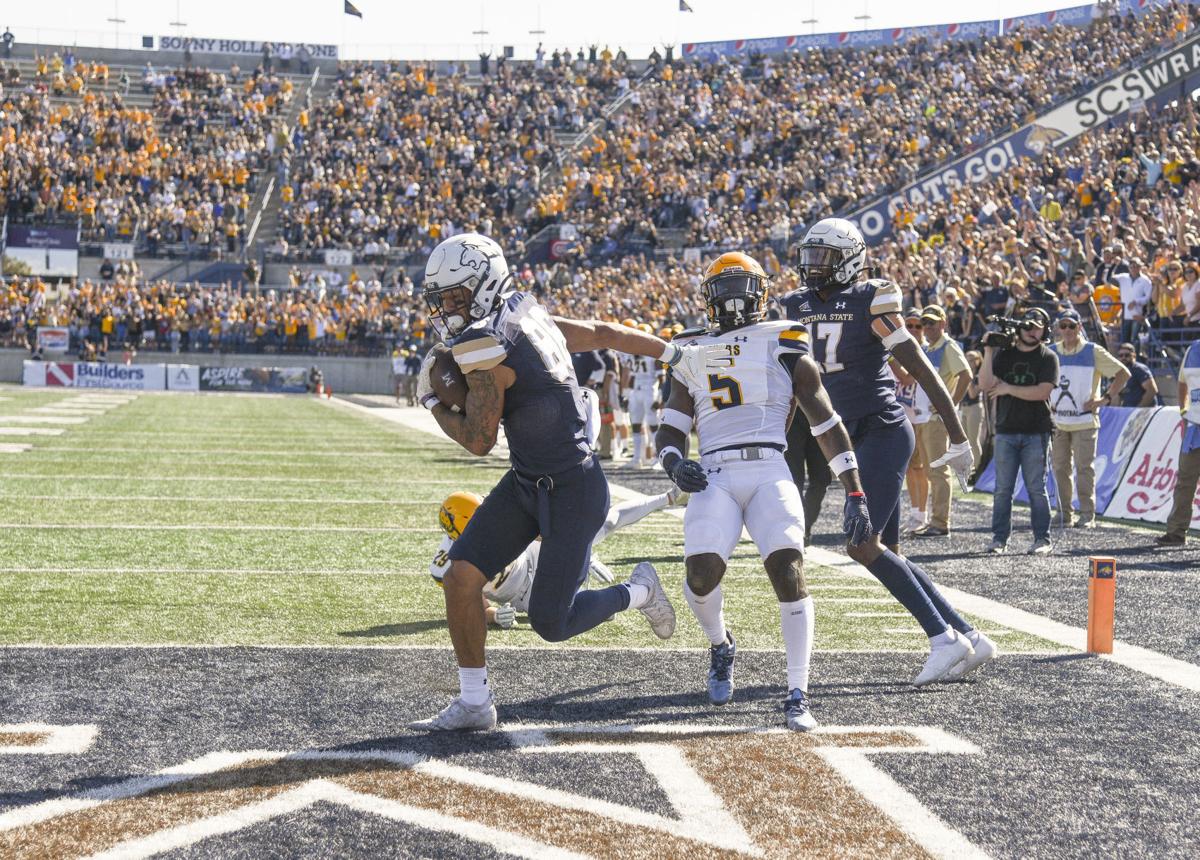 BOZEMAN — Darting up the sideline, Lance McCutcheon swiftly turned around and hauled in a pass as he was pushed out of bounds.

The play happened so fast, not even McCutcheon thought he had his foot down for a catch. But as the play was reviewed, he gestured it was a completion. The officials agreed with him. The play stood.

That reception, which led to a field goal, was one of many ways McCutcheon has fueled MSU. With 107 receiving yards on four catches and a touchdown to go with a 10-yard rushing TD, McCutcheon was once again a bright spot as the No. 11-ranked Bobcats (4-1, 2-0 Big Sky) won 40-7 over Northern Colorado (2-3, 1-1) on Saturday at Bobcat Stadium.

McCutcheon’s leap in productivity has been astonishing. His 521 receiving yards through five games this season leaves him one away from his first three seasons (522) combined.

He’s reeling in passes over defenders, like he did on his touchdown. He’s running a variety of routes, like he did along the boundary. And he’s using his intelligence and athleticism well, like he did on a quick pass he took 48 yards on Saturday.

He pointed to his increased confidence. And maybe that’s one reason he’s making good on his opportunities. But it’s a little more than that.

The addition of quarterback Matthew McKay has been imperative. Their connection is entertaining to behold.

Following the graduation of Kevin Kassis, who was among MSU’s career leaders in receiving numbers, and Travis Jonsen, a member of the Tampa Bay Buccaneers practice squad, targets needed to go somewhere. McCutcheon was ready.

“Nothing up until this point has surprised me,” Vigen said. “We probably could’ve gone after him more, but his productively continues to be a big part of our offense.”

McCutcheon’s acrobatic sideline catch is just one of several he’s made throughout his career. But he rarely made routine plays he’s making now. While he’s had highlight showings, like when he was featured on ESPN for a leaping, one-handed grab in the playoffs, he didn’t consistently produce as much as he was capable of.

That has all changed. With yet another game with over 100 yards, McCutcheon has emerged as one of the premier wide receivers in the FCS.

Going into the game, the senior wideout from Bozeman was sixth in the country with 414 receiving yards, which was just 13 from a spot in the top three.

Vigen was asked why McCutcheon and McKay have developed such a beneficial chemistry since McKay transferred from North Carolina State in 2019.

“What occurs is,” Vigen started off by saying, the perfect prelude to an answer detailing the intricacies of the Bobcats’ aerial attack that perplexed Northern Colorado’s strategists. Instead, he just said, “Lance is hard to cover.”

Sometimes the simplest answer is the right one. And the solution for the Bobcats’ offense has been throwing to McCutcheon until defenses figure it out.

Northern Colorado often covered McCutcheon with a single defender. No matter who it was against, the Bobcats liked that matchup.

On MSU’s first possession, less than five minutes into the game, McKay threw to the end zone and McCutcheon corralled the contested pass for the Bobcats’ first touchdown of the game. MSU's next drive was ended by a handoff to McCutcheon for a 10-yard score.

“I love seeing Lance make big plays,” Montana State linebacker Callahan O’Reilly said with a smile. “He’s been making a lot of them. So it’s fun to watch.”

McCutcheon’s presence does a great deal for the Bobcats’ offense. With 276 passing and rushing yards, they had a perfect balance Saturday.

With a devastating offensive line and a group of running backs that features Isaiah Ifanse, who rushed for over 100 yards yet again, the Bobcats always knew they could thrive on the ground. But with McKay consistently finding McCutcheon, defenses have to make difficult decisions when they face MSU.

“He’s just become a huge playmaker for our offense,” O’Reilly, who was McCutcheon’s quarterback at Bozeman High, said. “Anytime they throw the ball to him, there’s a good chance he’s coming down with it. He’s been making a lot of explosive plays, which is awesome to see.”

McCutcheon means much more to this team than a dependable receiver. He’s a reliable teammate.

When fellow receiver Willie Patterson was slow to get up after he was illegally hit on a punt return, McCutcheon began pondering if Patterson would be alright considering his past collarbone injuries.

When the Bobcats were preparing for the game, he told another wideout, Jaden Smith, Saturday would be his day. McCutcheon believed Smith hadn’t yet showcased his potential and wanted to express confidence in him. Smith had a career-high 75 yards on four catches.

When true freshman Andrew Patterson was called on to take the field, McCutcheon noticed a nervous grin on his face. McCutcheon told him, “You’re good. He’s putting you in for a reason.” A few moments later, McCutcheon was telling the young receiver how proud he was of him as the freshman had taken his first career reception 44 yards for a touchdown.

“It means everything to me,” McCutcheon said of his leadership position. “My senior year, I’ve got a lot of old and young guys counting on me to make a play. And that’s just an unbelievable feeling.”

McCutcheon means more to this community, too. The announcement of him being recognized as the player of the game elicited applause from fans at Bobcat Stadium. They relished seeing him succeed at the Division I level in a town he grew up in.