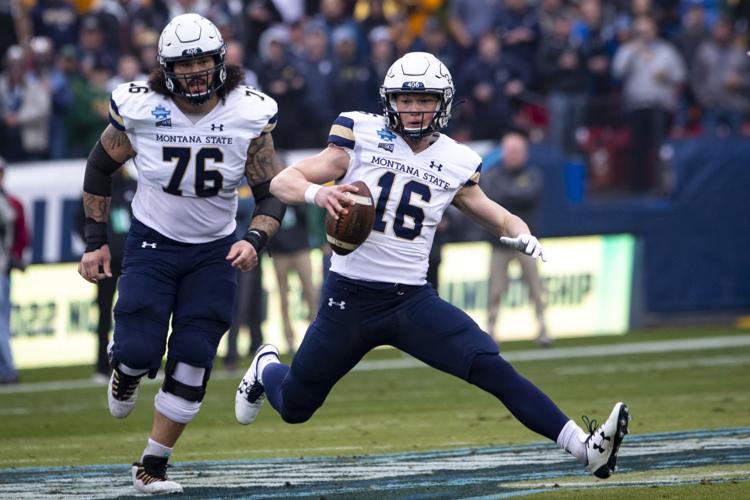 Montana State's Tommy Mellott scrambles out of the pocket, trailed by Lewis Kidd, against North Dakota State in the FCS championship game at Toyota Stadium in Frisco, Texas, on Jan. 8. 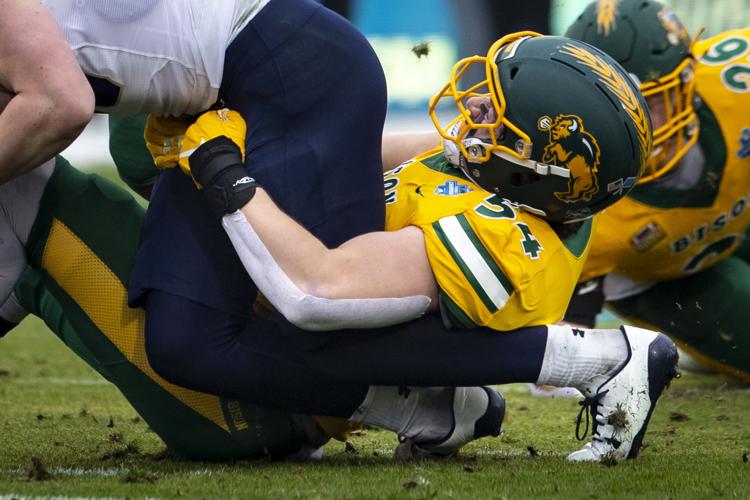 The right ankle of Montana State's Tommy Mellott appears to twist as North Dakota State's Jake Kava comes down on top of it during the FCS championship game on Saturday, Jan. 8 in Frisco, Texas.

BOZEMAN — Montana State quarterback Tommy Mellott underwent a successful ankle surgery and will be ready to go for the 2022 season, sources told 406mtsports.com.

Mellott had surgery Tuesday in Bozeman to repair a torn ligament in his right ankle. Sources did not provide a specific return date, but they expect Mellott to recover by spring practice in March, barring any setbacks.

The key question for Mellott going forward will be how much the repaired ankle affects his usage and ability.

The freshman from Butte suffered the injury on the opening drive of MSU's 38-10 Football Championship Subdivision title loss to North Dakota State on Jan. 8. He ran up the middle for a first down and was tackled by NDSU's Jake Kava, who landed on Mellott's right leg and caused the ankle to twist awkwardly. Mellott, who was making his fourth start of the season, limped around for the final three plays of the drive, throwing two passes and handing off once to Isaiah Ifanse.

Mellott's injury occurred on his third rushing attempt of the drive. He averaged 24.7 rushes per playoff game going into the championship, and he set an MSU playoff record for QBs with 34 carries in a 31-17 semifinal win over South Dakota State on Dec. 18.

"The plan was to be between 25 and 30, but knew it was going to have to go that way," MSU head coach Brent Vigen said after the SDSU game. "The good thing with where he's at in the grand scheme of things, 14 games, he's really played the entirety for three games. He's not carrying the wear and tear of a full season."

It's impossible to know if the playoff workload contributed to Mellott's injury. He had three weeks to recover from the SDSU game, and Kava tackled Mellott in a way that probably would've injured many players' ankles. Perhaps the wet grass field at Toyota Stadium in Frisco, Texas, played a role, although that's also difficult to blame. The biggest culprits were likely bad luck and the nature of football.

Injury risk in football, however, isn't the same for every player. A pass-first quarterback gets hit less often than a dual-threat one. An easy way to minimize the chances of Mellott suffering another injury is to run him less.

But Mellott is a game-changer when he runs the ball, as he showed with his 137 rushing yards per game and 5.6 yards per carry in the Bobcats' first three playoff games. Maybe he'll throw more in future seasons. Maybe he'll split time with other QBs, such as Wyoming transfer and fellow dual threat Sean Chambers.

Or maybe Mellott's coaches will use him the same way they did in 2021, taking advantage of his rushing prowess even if that increases his injury chances. MSU has not commented publicly about Mellott's injury since Jan. 8.

Mellott injured his ankle on the first drive of the FCS title game and didn't return.