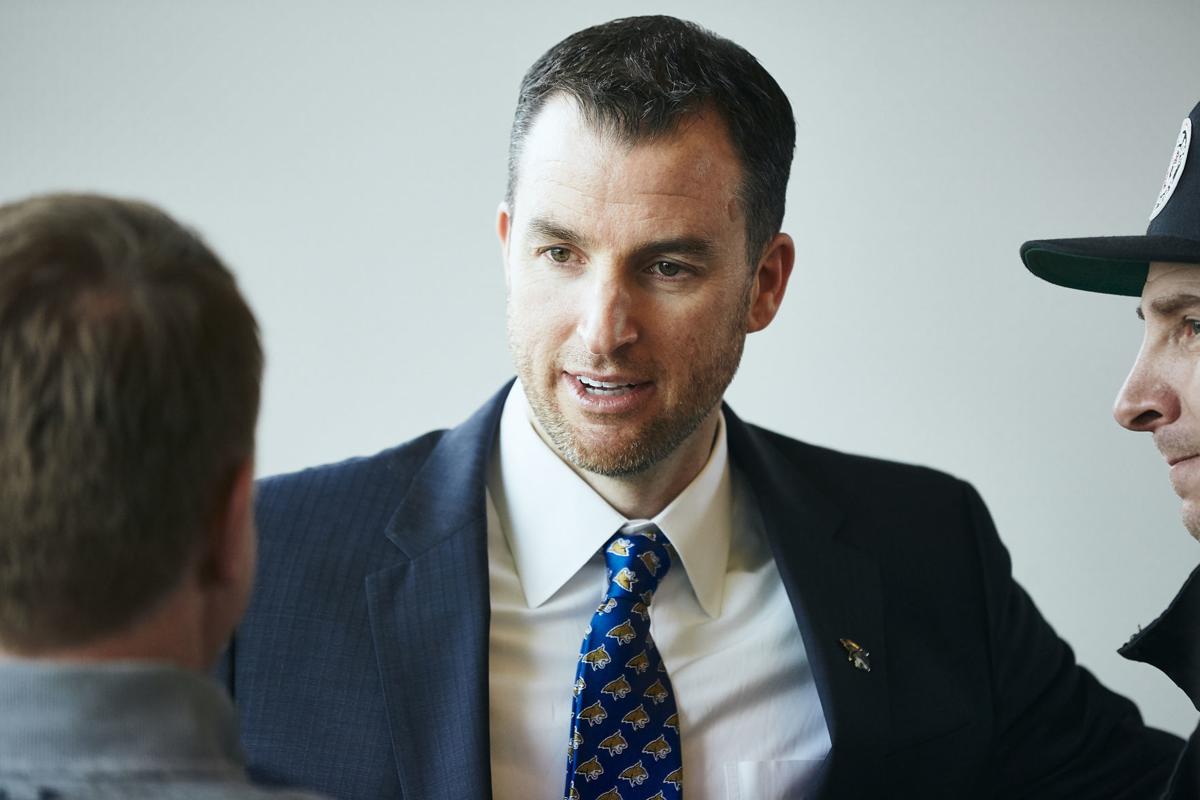 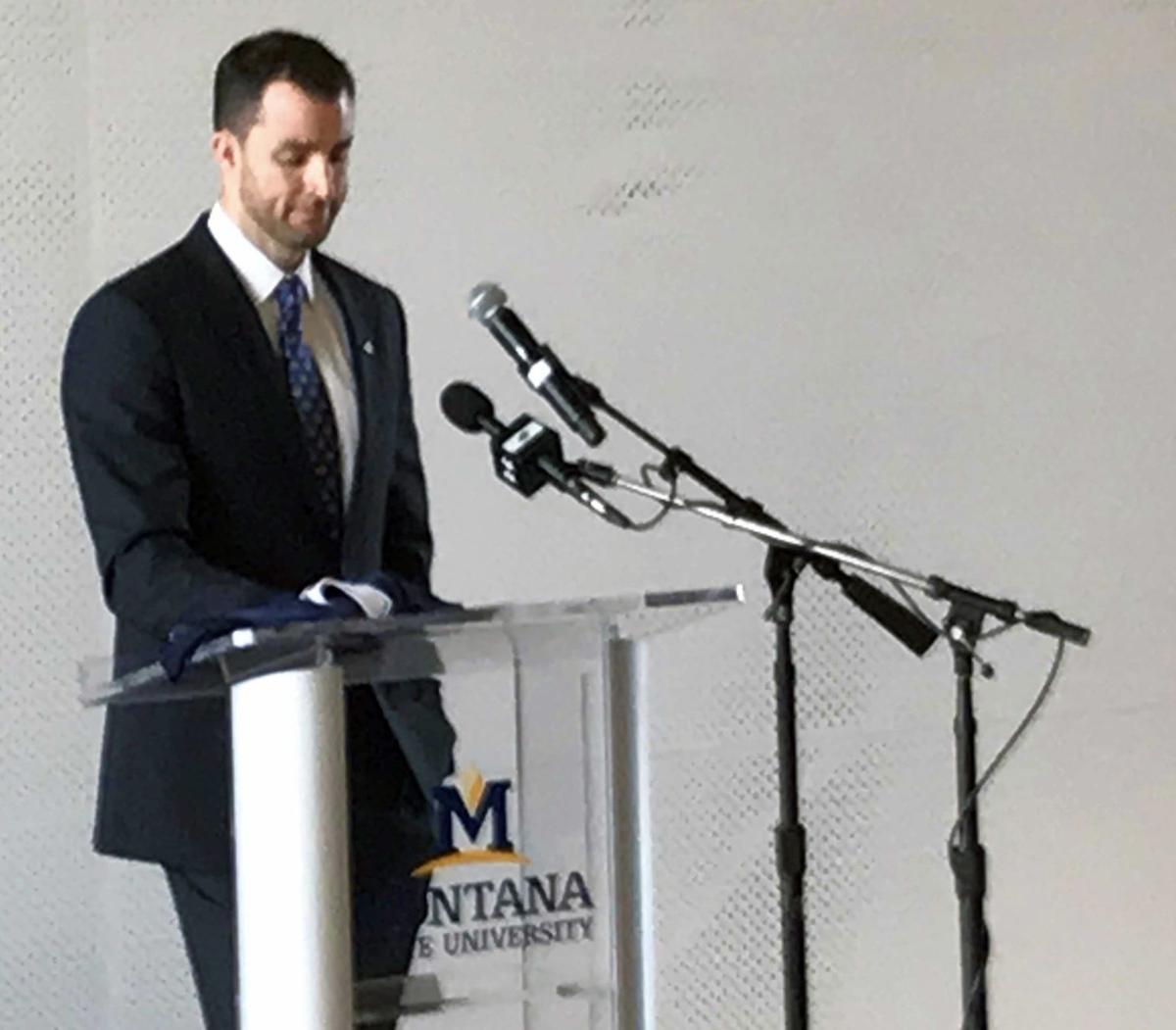 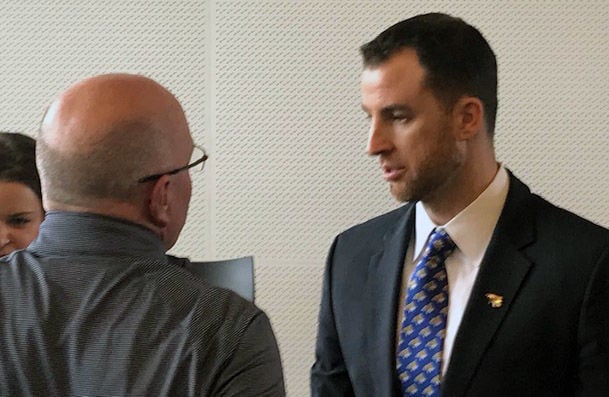 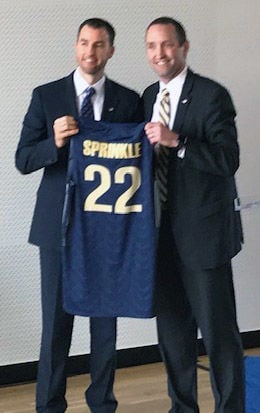 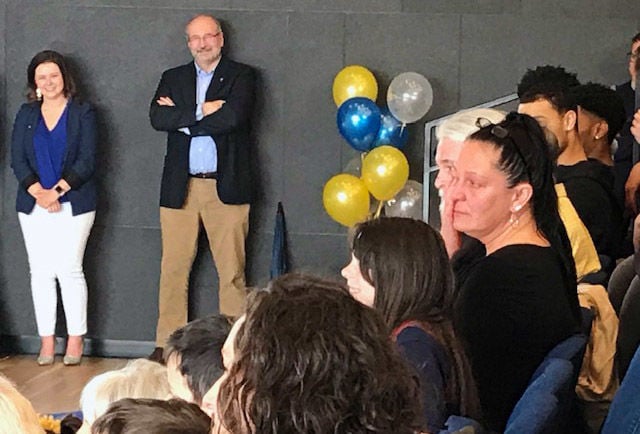 Danny Sprinkle's aunt, Carrie Sprinkle of Butte, in black, wipes away a tear as MSU's 23rd head coach talks about what it means to be home. 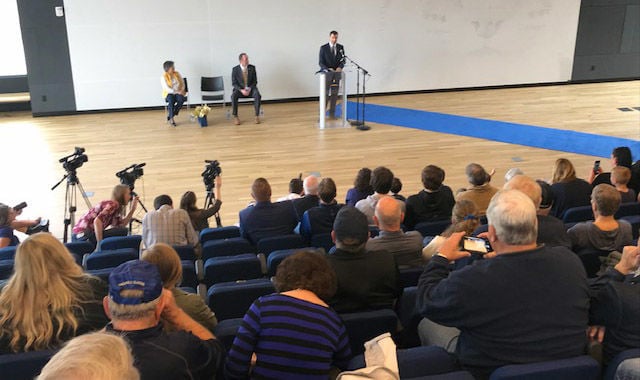 A crowd of about 100 greeted new coach Danny Sprinkle on Friday in Inspiration Hall at MSU's new Asbjornson Hall.

Danny Sprinkle's aunt, Carrie Sprinkle of Butte, in black, wipes away a tear as MSU's 23rd head coach talks about what it means to be home.

A crowd of about 100 greeted new coach Danny Sprinkle on Friday in Inspiration Hall at MSU's new Asbjornson Hall.

Sprinkle, wearing a blue tie with gold Bobcat logos on it, repeatedly stopped to compose himself and apologize to a crowd of about 100 clad in blue and gold Friday afternoon at MSU's sparkling new Norm Asbjornson Hall — a fitting symbol for the new era the 2000 alum hopes to take a program that had the campus buzzing with energy back in his heady playing days.

"It was … I can’t put it into words," Sprinkle said of his moment behind the microphone, gazing and pointing at familiar faces. "Because it’s about everybody else. It wasn’t even about me. I’m super elated, ecstatic to be here, but if it wasn’t for everybody in that room there's no way I would be here. Everybody. It was almost my way of there's no other way to express it but to get emotional."

Even members of the MSU staff flicked away a tear or two as Sprinkle thanked a lengthy list of supporters and talked about what it meant to return to Bozeman after spending all but two of the last 19 years in southern California.

"Seeing him like that just kind of emphasizes that this was the right guy at the right time."

Sprinkle, 42, returns to MSU after six years as an assistant coach at Cal State Fullerton. He also had two stints at Cal State-Northridge sandwiched around two years at MSU under former coach Brad Huse (2006-08).

Sprinkle, a sharp-shooting 'two' guard from 1995-2000, is the seventh-leading scorer in MSU history and as a freshman was a key to the program's last Big Sky Conference regular-season and tournament titles in 1996. Since his departure, the Bobcats have had four winning seasons -- and only two in the past 17 years, both teams going one game over .500.

They've had a penchant for solid starts followed by February swoons.

"It’s time," Sprinkle said, echoing the words of his father, Bill, a Montana sports standout in his own right. "It’s been too long — 20-something-odd years. That’s too long in a program like this. That standard is going to be up there and we’re going to beat that standard every day. It’s time."

Costello said the appeal of the community and university lured a standout group of applicants that he and the search committee quickly whittled to four. They conducted interviews in Salt Lake City, and Costello said though he felt as if MSU couldn't go wrong he kept coming back to Sprinkle.

Even so, Costello said he wanted to sleep on it one more night after a final visit with Sprinkle. The next morning he was sure Sprinkle was "the right fit".

Sprinkle described the experience as "emotionally exhausting, to be honest."

"As soon as it opened up, I immediately knew I wanted to get involved. It was crazy flying up to Salt Lake City, getting up at 6 a.m. and getting a suit on, sitting around a table and eight people grilling you. It's nerve-wracking, especially when you're so passionate about you don't want to screw up."

In addressing the crowd Friday, Sprinkle eventually turned to returning players sitting in the first two rows, including guard Harald Frey, who was on the search committee along with, among other key figures, former coach Stu Starner, who guided some of MSU's great teams of the late '80s. None of the current players have entered the NCAA's transfer portal, Costello said, a testament to their closeness.

"Every day you guys wake up you have to dream it before it happens," Sprinkle told them. "Like today? Trust me. I've dreamed this. It happens. And when you're cutting down those nets you're going to come back to this moment and say, 'I saw this happen before tonight'."

Sprinkle said he'll employ a fast-paced game that includes plenty of pressure on defense, much like his former coach, Mick Durham, in the '90s. He also said he'll wear many more hats in an attempt to help market the program and put bodies in the seats — even visiting fraternities and sororities.

"Though not late at night," he hastened to add, eliciting laughter from the audience.

Getting there, though, all starts with players.

"Obviously recruiting," Sprinkle said. "You have to get as much competition at each spot as possible to make the players better. When you have somebody pushing you every day, it's a different level of focus you bring to the practice floor and it raises everybody's level. You've got to get the best talent, you've got to recruit hard and get great players. You've got to get guys who are game-changers.

"That's the main thing — and then developing them. Once they get here, the player development piece is going to be huge. If they were already developed they'd go to Pac-12 schools. I want to get kids who have Pac-12 talent so that by time they're juniors they could play anywhere in the Pac-12, and that goes back to me and my staff developing them."

That process begins immediately as Sprinkle builds his staff and adds to a recruiting class that includes Manhattan Christian standout Caleb Bellach. Sprinkle said he respects the assistants from departed coach Brian Fish's staff and will meet with each "to see if we share the same vision."

From the audience's response, it was clear they like what Sprinkle appears to bring.

"You saw it — the passion," said Costello, who knew Sprinkle was his guy but, "Maybe the cherry on top is seeing the reaction and seeing our fans fired up."

Sprinkle said he has marveled at the dramatic changes at MSU and in Bozeman, both of which are booming. He noted that when he was a student the population was 11,000; now MSU boasts 17,000 students.

Now, he said, he's ready to bring the same energy to Bobcat basketball.

"Thank you for this opportunity," Sprinkle said, glancing to his right at both MSU President Waded Cruzado and Costello. "I won't let you down."