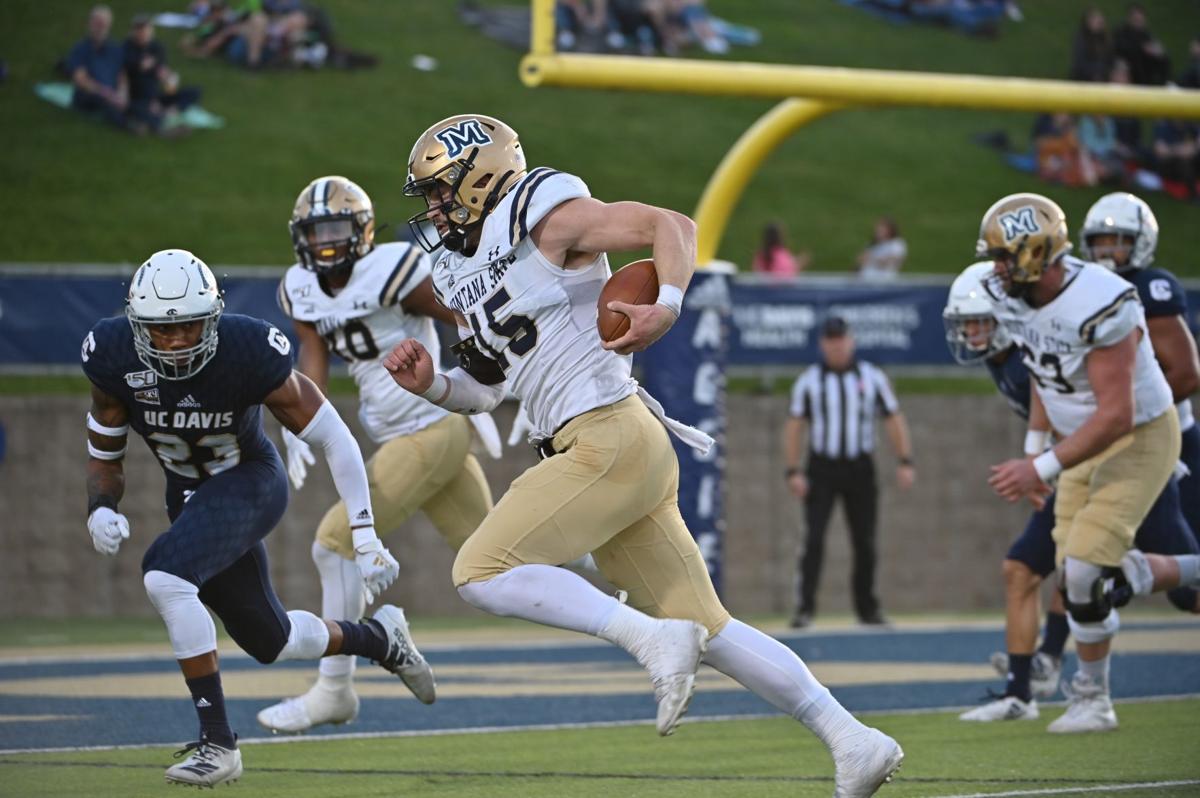 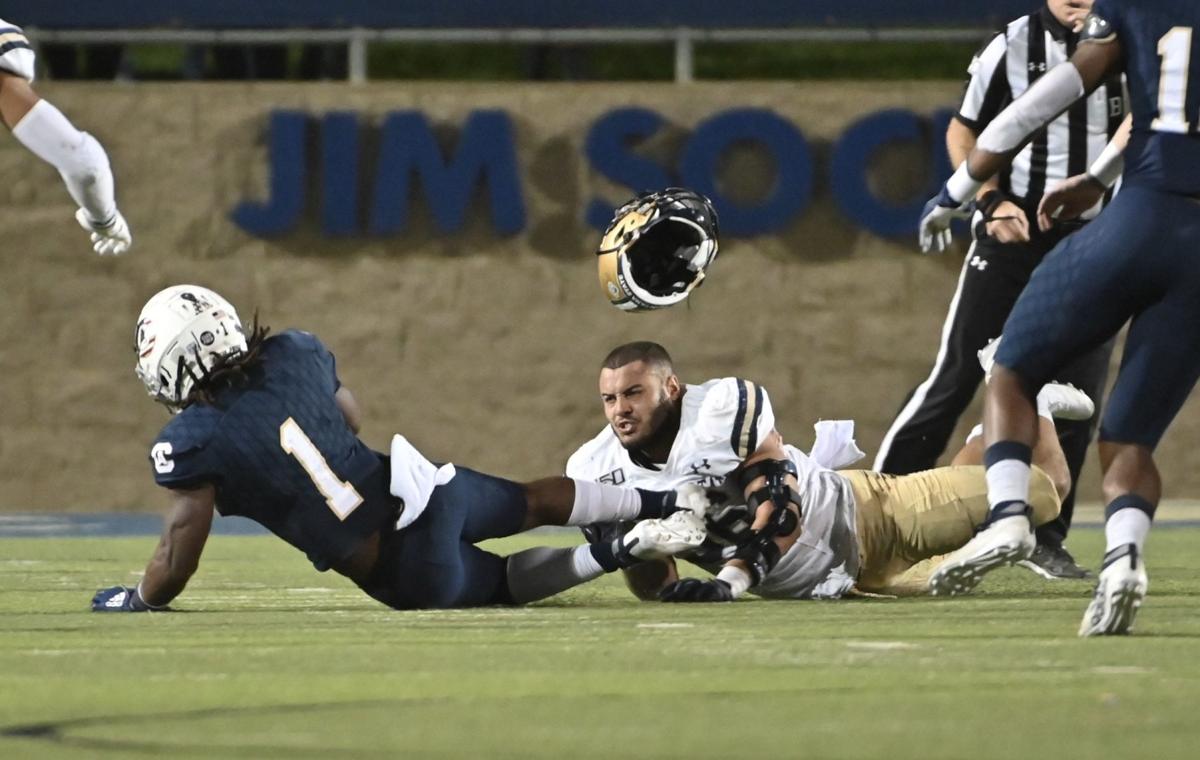 Montana State's Amandre Williams loses his helmet as he makes a tackle on UC Davis' Isaiah Thomas on Saturday in Davis, Calif.

Montana State's Amandre Williams loses his helmet as he makes a tackle on UC Davis' Isaiah Thomas on Saturday in Davis, Calif.

DAVIS, Calif. — Late-season football is a time for finishers. So is the fourth quarter. It seems Montana State wouldn’t have it any other way.

Trailing early in the final period on the road Saturday night, the Bobcats took control at the end of the game to capture a crucial 27-17 Big Sky Conference victory over UC Davis. It was MSU’s third consecutive win and placed it firmly in the FCS postseason discussion.

The No. 10-ranked Bobcats (8-3, 5-2 Big Sky) improved to 10-3 in all November games in the four-year tenure of coach Jeff Choate — with the biggest one of them all looming next week.

MSU will now turn its attention to archrival Montana for the 119th meeting between the teams to be held in Bozeman in the final game of the regular season. But Choate wasn’t keen on talking about that yet.

He wanted to enjoy the Bobcats’ most recent win, which was made possible with timely defense and a handful of explosive offensive plays.

“We always talk about dragging them into deep water,” Choate said. “We do what we do and don’t panic and keep fighting.

Down 17-14 at the start of the fourth quarter, the Bobcats closed the game with a touchdown run by the oft-injured but not forgotten Isaiah Ifanse and two field goals by Tristan Bailey to finish off the Aggies.

Most importantly, MSU’s defense pitched a shutout in the final 15 minutes. The opening drive of the game provided some foreshadowing to that.

MSU was tested right away defensively as the Aggies moved the ball to the goal line on their first possession. But the Bobcats got out of it unscathed when UC Davis quarterback Jake Maier misfired on a play-action pass on fourth down.

Later in the quarter, MSU quarterback Tucker Rovig connected with a wide-open Travis Jonsen for a 47-yard pass down the sideline, which set up a 5-yard touchdown run for Troy Andersen and a 7-0 Montana State lead.

With a 33-yard pass to Darius Livingston on the final play of the first quarter, Maier became UC Davis’ career leader for passing yards. That drive led to a 23-yard field goal by Max O’Rourke.

The Aggies took the lead at the midway point of the second quarter on a 4-yard touchdown run by running back Ulonzo Gilliam.

MSU’s Jason Scrempos blocked a 24-yard field goal try by O’Rourke, and that led to a 75-yard touchdown run by Jonsen on a broken play after the Bobcats took over. It was Jonsen’s career-long run from scrimmage.

“That was my fault,” Jonsen said of how his touchdown developed. “It was a busted play. But I felt like I had to make something happen and get some positive yards out of it. It just happened to turn into a 75-yard touchdown. Pretty good.”

Of his blocked field goal, Scrempos said, “We called a different call that time, so I lined up outside of the extra tackle, and he just kind of went down. The tight end stayed with one of our other guys. It was playing that way and I just kind of jumped through the gap and was free.”

Safety Brayden Konkol intercepted Maier late in the first half, and a deep ball from Rovig to Kassis set the Bobcats up at the 8-yard line. Rather than spike the ball to stop the clock, MSU tried to rush its field goal unit out but time ran out before the ball could be snapped.

“We practice that a lot,” Choate said. “We have a different long-snapper right now who hasn’t had the reps as much. I think we probably needed to help him out a little bit by going to the tap and the cadence a little quicker. Unfortunately the clock ran out.”

Neither team got much going in the third quarter, until Gilliam scored again on a shifty 18-yard run with 4:54 remaining in the period. That score put the Aggies back in the lead at 17-14.

UC Davis coach Dan Hawkins decided to go for it on fourth-and-short on the Aggies’ 35 late in the third but the Bobcats’ defense stopped Gilliam shy of the line to gain. A 13-yard run by Andersen on third and 19 put MSU in field goal range, and Tristan Bailey tied the game with a 37-yard kick with 12:20 left in the fourth quarter.

The Aggies’ offense converted just two of 14 third-down plays, and went 0 for 3 on fourth down.

“Rose up at the most opportune times, whether that was in the red zone, on our money downs, and then obviously having (three) fourth-down stops was big, big, big in this game,” Choate said.

Ifanse, making his biggest impact in weeks, scored a touchdown on a 5-yard run at the 8:22 mark of the fourth quarter to make it 24-17.

A 35-yard run by Andersen on the first play of MSU’s next possession pushed the Bobcats into UC Davis territory. Bailey then came on to hit a 41-yard field goal to make it a two-possession game with 3:39 remaining.

“Very rare was it that Jake knew where he was going with the ball,” Choate said. “He had to hold the ball a lot, check the ball down a lot.”

Gilliam finished with 133 yards on 20 carries.

Ifanse had 77 rushing yards on 10 attempts. It was his greatest production since he ran for 114 yards in Week 2 against Southeast Missouri.

“He’s a difference maker,” Choate said. “I think everybody saw the type of player that young man is a year ago. And we’ve been without him.

“I have to credit guys, starting with coach McGhee for keeping that room right, whether it was Shane Perry or the tremendous year that Logan Jones has had. You go all the way down the line. Lane Sumner. Troy stepping in, not 100% healthy but playing like the warrior that he is. It was big. But having Isaiah back is a nice thing.”

Looking forward, the Bobcats have won three in a row against the Grizzlies. They haven’t won four straight against UM since the 1970s.

“You can just tell how we’ve made adjustments, how we’ve changed things up slightly and you can see we’re cruising right now,” Kassis said. “We’re doing well right now, and we want to keep that going.

“We take pride in executing in November.”

No. 10 Montana State earned a road-win over UC Davis to keep their playoff hopes alive.

DAVIS, Calif. — Saturday’s visit to UC Davis, according to Montana State  coach Jeff Choate, is “consequential and big” for the Bobcats simply…