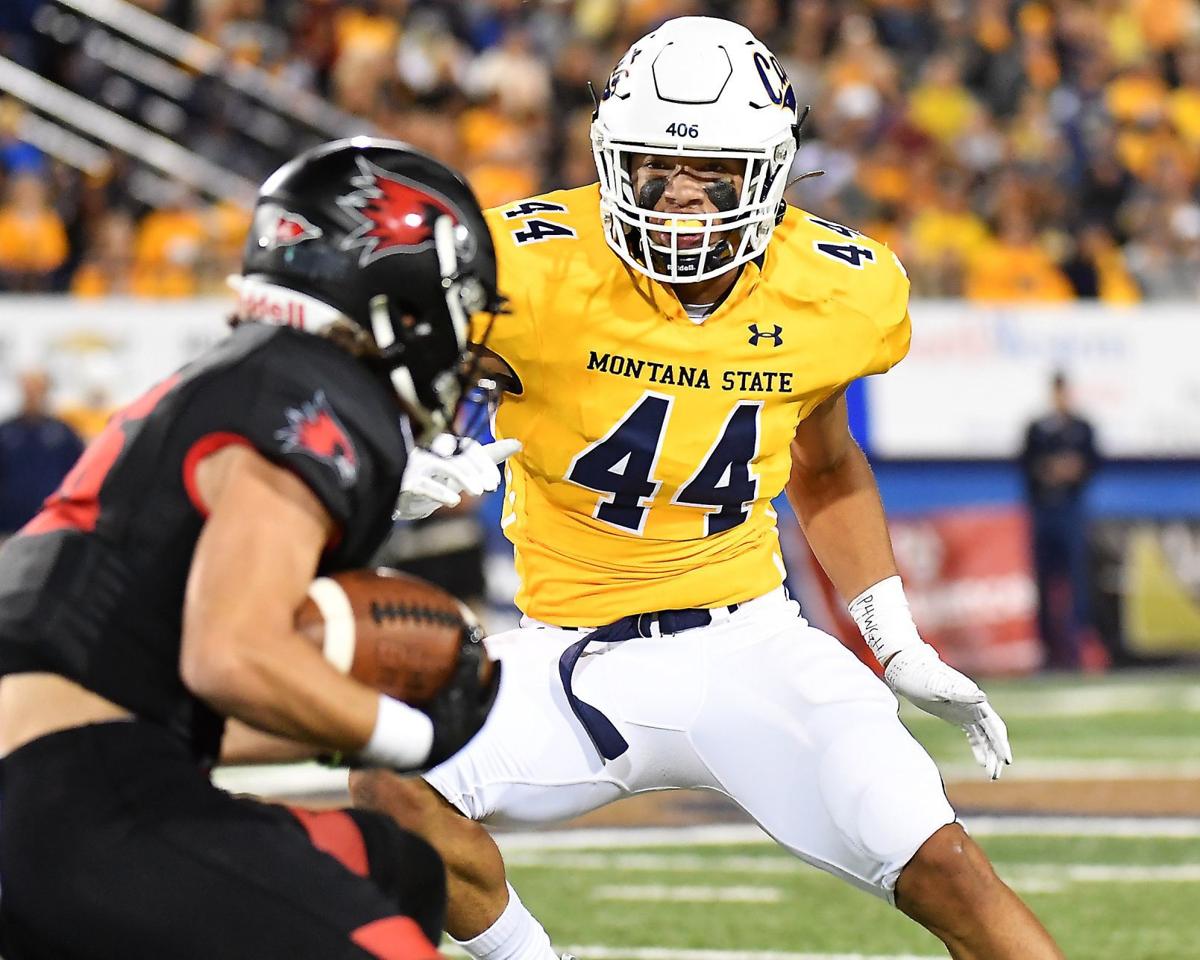 Athletic linebacker Daniel Hardy came to Montana State before the 2018 season from the College of the Siskiyous in northern California. 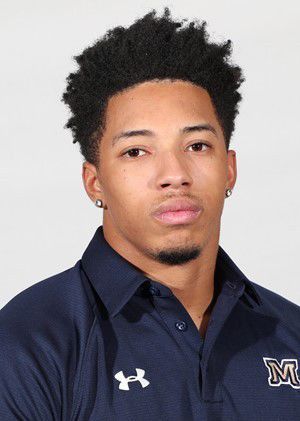 BOZEMAN — The whistle blew to signal the start of a fall camp practice at Montana State in August, and the various position groups broke from their individual drill work to convene for a pep talk.

As the linebackers ran toward midfield, they had to move to avoid the nearly four-foot-high, five-foot long PVC-pipe water fountain positioned near the corner of one of the end zones.

As the players trotted around the fountain, out of nowhere came Daniel Hardy, the Bobcats’ 6-foot-3, 220-pound outside linebacker, who leaped over the apparatus with a two-foot broad jump, clearing it with ease as if to showcase his considerable athletic gifts.

Hardy, now a junior, was considered a project with very little on-field experience when he came to MSU before the 2018 season as a transfer from the College of the Siskiyous in northern California. But his physical talent hasn’t been questioned since Day 1.

“I just try to use my gifts to the best of my ability, I guess,” Hardy said during an interview this week. “I might not be the biggest or strongest guy, but athleticism definitely helps with that.”

Hardy played just one year of football at Valley Catholic High School in Beaverton, Oregon, where he dedicated most of his time and effort to basketball. But he ended up on a previously unforeseen football path.

Siskiyous coach Charlie Roche marveled at Hardy’s raw talent, saying at the time of his signing at MSU that Hardy could have perhaps been a Pac-12 recruit if he’d played one more season in junior college.

Bobcats coach Jeff Choate said he and his coaching staff had been scouting Hardy with the belief that if they didn’t extend an offer to him as a JC freshman that they’d run the risk of missing out altogether.

“Daniel is a tremendous athlete, 6-3 with a wingspan of almost 6-10, and he's explosive, fast, and has huge upside,” Choate said in 2018. “He's a guy that we evaluated numerous times and we kept coming back to the fact that if we tried to wait a year we wouldn't have a chance.”

Through three games, Hardy has made seven tackles (two for loss) with one quarterback hurry. Last season as a sophomore he five tackles in 10 games.

Hardy has earned the reputation of a team-first player who isn’t driven by or concerned with individual success or accolades. His motivation runs much deeper.

When he was a sophomore at Valley Catholic, Hardy’s father, well-known Portland-area pastor Wilbert Gail Hardy Jr., was diagnosed with metastatic kidney cancer and given six months to live. Roughly three years later Wilbert was still battling the disease.

He eventually passed away in February of 2018 when Hardy was a freshman at Siskiyous and in conversations with the Montana State coaching staff about joining the Bobcats program.

Life had thrown him a wicked curve ball.

“He beat the odds by a longshot,” Hardy said. “It was something that we all saw coming, but that doesn’t really cushion the blow. We got to spend as much time as we possibly could with each other before he passed, so that was good.”

Hardy made a promise to his dad to take care of his mother and his little sister, and that’s a vow he said he’s carried with him every day since. But Hardy also had plans of his own, intentions that included football.

He’s used the platform at Montana State to honor his late father, and he does it with the way he plays and goes about his business as a student-athlete and member of the MSU community.

On the field, Hardy pays tribute to his father with markings on his cleats, towel and tape that read P4WGH — Play For Wilbert Gail Hardy.

Before his first game with the Bobcats, which was the 2018 Gold Rush opener against Western Illinois, Hardy’s emotions were especially prevalent. But he noted that the support he’s received at MSU has been galvanizing.

“It was a heavy moment. Coach B.J. (Robertson) stayed behind to walk with me and talk with me. He told me, ‘Your dad is here with you. I’m sure he’s so proud of you.’ Just a ton of support from those guys and I couldn’t be more thankful.”

With his father’s memory in tow, Hardy continues to mesh his athletic talent with growing football smarts.

Hardy has visibly benefited from MSU’s offseason workout program, going from 196 pounds to 223 pounds in the span of seven months. He credits strength and conditioning coach Alex Willcox and team dietician Brittney Patera for their help.

“To be honest when I came in, I couldn’t tell you the first thing about pass coverage, recognizing formations, recognizing route combinations, stuff like that,” he said. “I’m not even joking. There are rules of football that I just didn’t know existed when I came in.”

One example occurred at the end of last year’s rivalry game at Montana, when Choate called a crucial timeout with the Grizzlies on the 1-yard line with mere seconds left to halt a touchdown opportunity. UM fumbled on the ensuing play and the Bobcats preserved a 29-25 win in dramatic fashion.

“I was like, ‘Wait, we can do that?’ That was really smart. I never thought of something like that,” Hardy said with a laugh.

Hardy said he’s continued to learn the finer points of the game with continued reps, film study and coaches meetings.

Choate says Hardy is accountable, smart, and tough both on the field and off, and that his improvement has been apparent.

“He’s a rep guy, and a lot of guys are like that. It’s one thing to see it and another thing to do it,” Choate said. “Especially this last week (at Western Illinois) with Troy kind of being shelved a little bit, with the exception of third downs, he got a ton of game reps.

Montana State hosted Norfolk State to close out their nonconference schedule. Behind a new starting quarterback, the Bobcats rewrote some of t…

BILLINGS — Linebacker Daniel Hardy signed to play football at Montana State in April, and he’ll come to Bozeman with varying degrees of untapp…