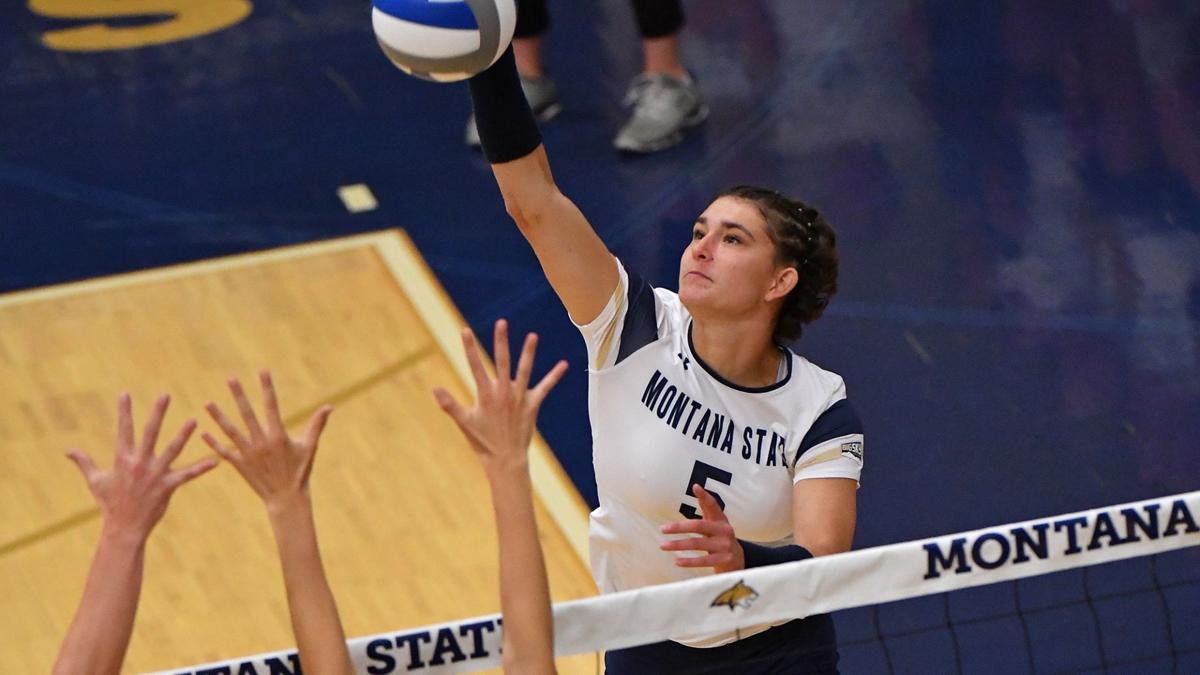 Montana State outside hitter Hailey Merkes underwent aggressive treatment to eradicate Non-Hodgkin's lymphoma and a tumor "the size of a dinner plate" in her chest. 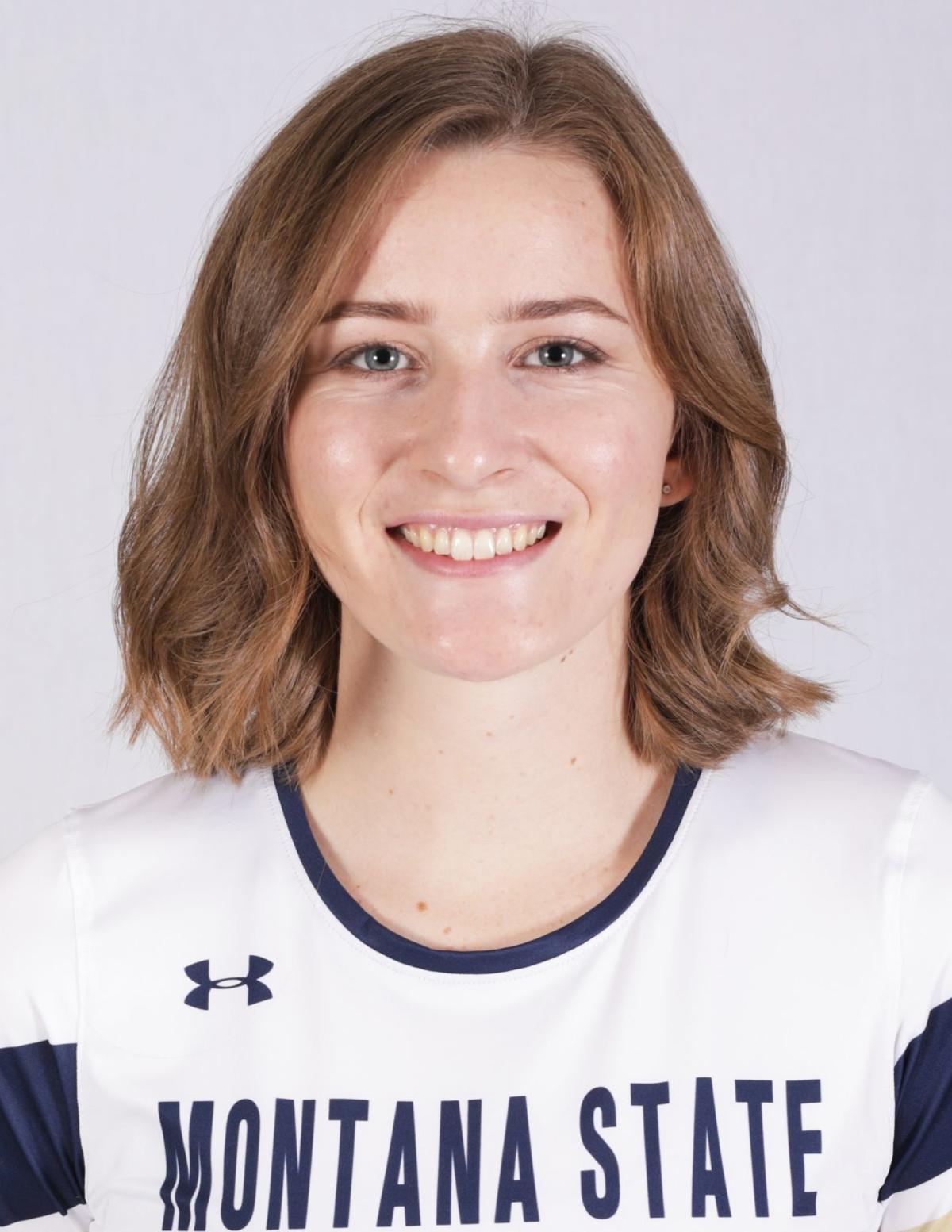 BOZEMAN — Each year before the season begins, the Montana State volleyball team runs the steep route up Bridger Canyon to the large block “M” emblazoned on the mountainside facing southwest toward the valley.

It’s a conditioning exercise but also serves as an opportunity to build morale — for each player (and coach) to exert themselves but to do it as one team with one common purpose.

In 2017, an unproven freshman outside hitter from the Bay Area in California named Hailey Merkes was trudging up the trail with her teammates, not leading the pack but not falling behind. When she finished she had a little bit of a wheeze, a little bit of a cough. But that was normal.

Head coach Daniel Jones, the man leading a resurgent program that begins play as the No. 4 seed at the Big Sky Conference tournament Thursday in Sacramento, wasn’t immune.

“I felt that way, too,” Jones recalled.

But by midseason, as her breathing problems persisted, an EKG and a chest x-ray revealed that things, in fact, were not normal. Something was bending Merkes’ trachea, a condition that made it difficult for her to pull air into her lungs even during long conversations.

A subsequent trip to the intensive care unit at Bozeman Health discovered that she had a large tumor pressing against her windpipe — “a mass the size of a dinner plate,” Merkes said. It was the reason she could only gasp about 30% of oxygen each time she inhaled.

Then came a biopsy. Then came the worst news of all: At 18 years old, Merkes was diagnosed with Non-Hodgkin’s lymphoma.

The next day Merkes was on her way back to California, where she eventually began extensive chemotherapy and radiation treatments to combat her condition.

“There were definitely low points,” Merkes said. “Sometimes I wanted to lock myself in my room.”

Merkes says she feels a kinship with MSU teammate Kaycee O’Dell, a middle blocker from Glendale, Arizona, who’s had to deal with significant health concerns of her own.

In July of 2018, not long after she first arrived on campus to join the team, O’Dell underwent the routine tests all athletes are required to make. Odd readings on her EKG raised some flags, but nothing too far from the ordinary.

As a result, O’Dell had an echocardiogram — an ultrasound of the heart muscle — which revealed a hole in the dividing wall between the atria of her heart. It’s a condition known as an atrial septal defect (ASD).

Jones, though, knew something wasn’t right with O’Dell in the days before this ultimate discovery.

“We allowed her to do limited activity, but not jumping and not playing six-on-six,” Jones said. “So we get into this ball-handling drill, and she turns blue. She legitimately turned blue. Her lips, her face … I was like, ‘Kaycee, you don’t look so good.’ She’s like, ‘Yeah, I’m a little out of breath’ and I’m like, ‘You need to sit down.’

“That was the moment, to me, that I recognized that this was serious.”

There was no other option for O’Dell but to have open heart surgery. On Jan. 10 of this year, O’Dell went under the knife at Phoenix Children’s Hospital.

“I don’t know. I think I just put a lot of trust in the man above,” O’Dell said. “Just kind of, whatever happens happens.”

The treatment plan Merkes endured in an attempt to eradicate her tumor and eliminate the lymphoma was beyond intensive: 12 rounds of chemotherapy (once a week) and 19 bouts of radiation (once a day) were ordered to deliver a knockout punch to the disease.

This, of course, came with side effects. Nausea. Fatigue. Hair loss. Merkes fought back by staying active back home. She began rock climbing. She helped coach club volleyball. She took steroids to maintain her appetite.

“I don’t think I really ever stopped until I physically couldn’t anymore. I think that helped keep my health up a lot compared to most going through it,” Merkes said. “But the motivation to get through it fast is what kept me going. As long as I had a positive mindset I was able to block out the negative.”

During the worst of it — when she was sick, tired and had no hair — Merkes garnered strength from her older brother Blake, who suffers from mental and physical disabilities.

“I thought about how people would look at him and I would get mad at myself for feeling sorry for myself when he goes through it every day,” she said. “I only had to go through it for a year of my life.”

Merkes credits the support of her family, friends, teammates and coaches for giving her as much moral support as she needed.

Now, the tumor has disappeared, the cancer is in remission and Merkes is back as a full-time member of the Montana State team.

“It definitely makes me feel like I’ve achieved something. Like I overcame something and I’m better for it,” she said. “I don’t think I realized that what I was doing was so hard. I kind of just put my head down and tried to plow through it.”

O’Dell was always averse to running long distances. But she never quite knew why. She was seemingly in fine shape. What was the problem?

It was a symptom of her ASD. As she was being wheeled into the operating room for what is a relatively “routine” procedure within the realm of heart surgery, O’Dell, like Merkes, took solace in the support of family, friends and teammates.

And when she emerged — though pain persisted and the road to recovery was long — O’Dell was like new again, and her congenital condition was remedied. She knew she’d be back on the court in due time. She spent much of her recovery time staying at the Glendale home of her best friend, Riley Dinnigan.

Friends since preschool, O’Dell said Dinnigan and her family served as another safety valve. Finally, O’Dell returned to MSU in May, enrolled in summer courses and slowly started to work her way back into game shape.

Through it all, her mindset never changed, and that’s a message she said she would pass on to other student-athletes facing similar challenges. And it’s an inspiring theme.

“Just put your trust into what’s happening. Everything happens for a reason,” O’Dell said. “You can’t change it. It’s not like I could have done the heart surgery on myself and be like, ‘All right, I’m good.’ I couldn’t just snap my finger and it’s all fixed. You have to trust the process.

“When you’re a part of a team you have some sisters behind you, that’s for sure. Hailey’s been through a lot more than I have. I can tell you that for a fact.”

As the news of Merkes and O’Dell came in separate waves, Jones said he was “devastated” on both counts. But he has since described Merkes and O’Dell as “resilient” and “unflappable,” and he couldn’t be happier to see them both return as active members of his squad.

Montana State athletic director Leon Costello, who does his best to remain in tune with the lives of all 350 Bobcat athletes, is similarly in awe.

“Kaycee and Hailey personify strength, toughness and perseverance,” Costello said. “I am proud of the student-athletes they are but more impressed with the individual people they have become.

“The challenges they have each faced are great, and their responses have been even greater. It shows a lot about their character an how they choose to live their lives each and every day.”

One of the mantras of the MSU volleyball program is “Build The Legacy,” and Jones said Merkes and O’Dell are walking examples of what that means based on how they handled their respective circumstances.

Not once did they waver.

“One of our values is perspective,” Jones said. “We talk about the days being long but the years being short. When people have life-changing scenarios like this it really hits home how short the years are — in life, but particularly in athletics.

“These girls are lucky to get four or five years in their athletic careers at the collegiate level. And when you have someone you love and care about who gets a year of that snatched away, it really hits home how important it is to make the most of each day. I think what you see with this current group is a group of young women who recognize that.

“They make the most of each day. They go out there and practice hard and they don’t take it for granted. I think Kaycee and Hailey have given a really good example of, ‘Hey, we haven’t got any excuses here. No excuses to not give our full effort.’”

FARMINGTON, Utah — Three Montana State players and another from Montana were named to the All-Big Sky Conference volleyball teams on Monday.