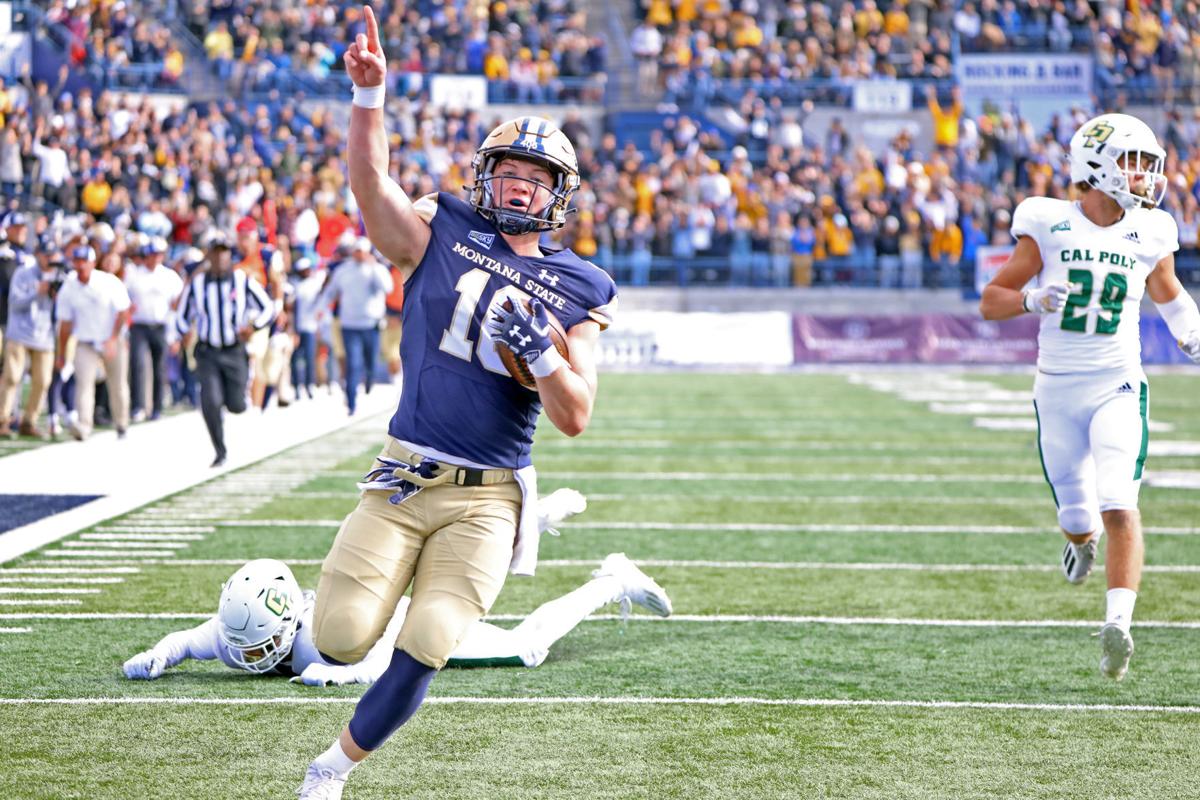 Montana State's Tommy Mellott celebrates as he reaches the end zone for a touchdown against Cal Poly on Saturday at Bobcat Stadium. 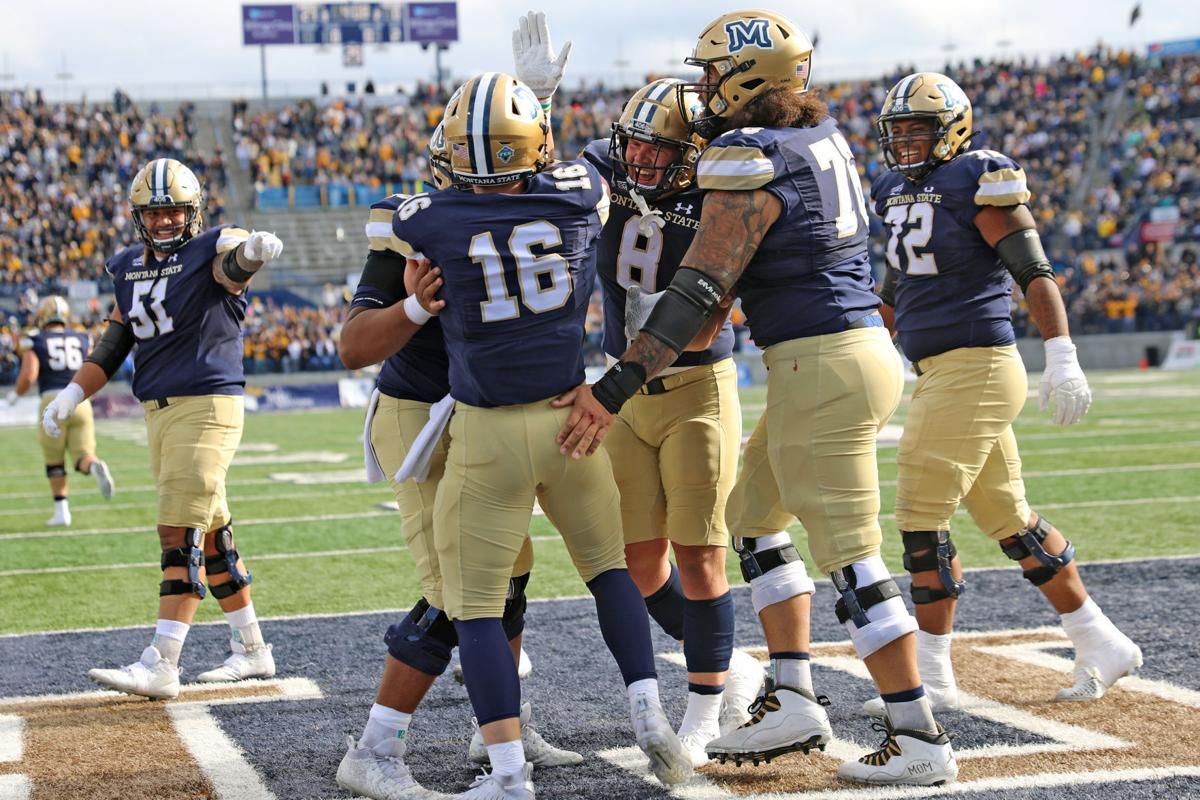 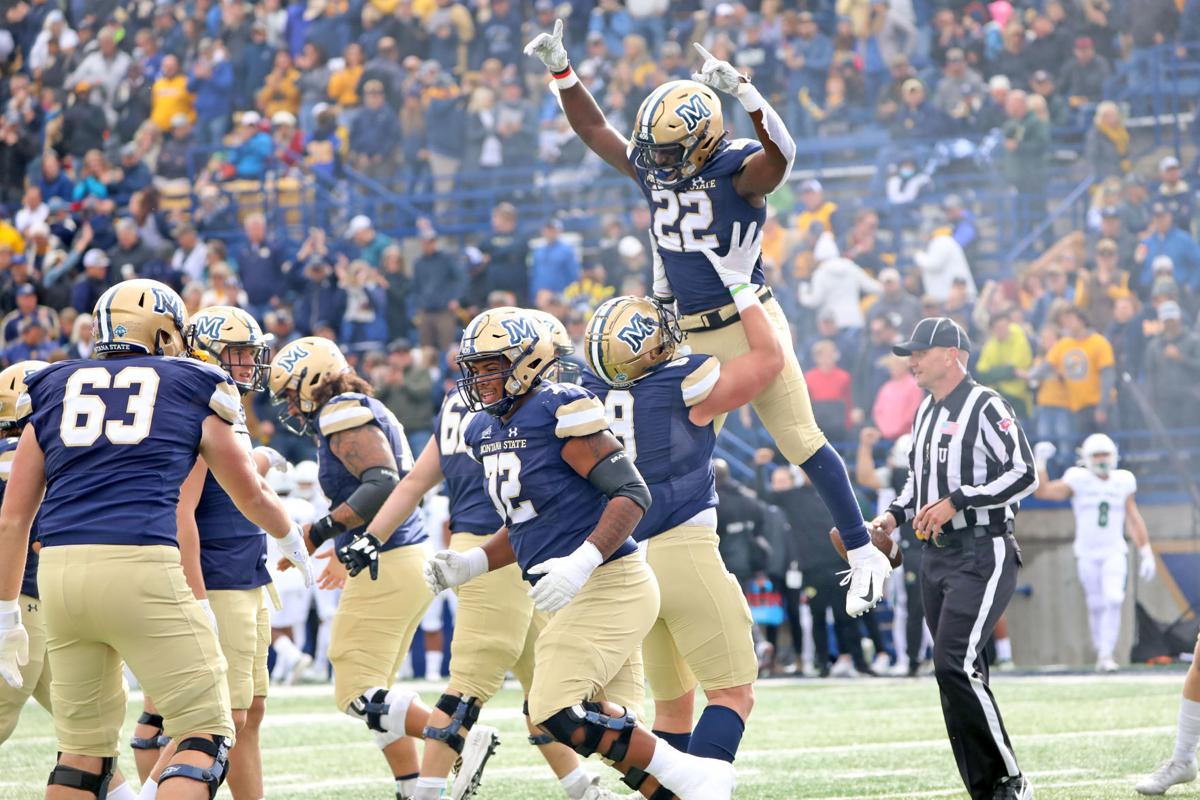 Montana State's Tommy Mellott celebrates as he reaches the end zone for a touchdown against Cal Poly on Saturday at Bobcat Stadium.

Here are three takeaways from the game.

Bobcats make the most of interceptions

Though the Bobcats were in control by halftime, they added to their lead rapidly in the third quarter.

Bozeman’s Callahan O’Reilly read the eyes of Cal Poly quarterback Jaden Jones, picked him off and returned it 39 yards with the help of his teammates blocking for a touchdown. That was the junior linebacker’s second interception of his career after recording one last week against Northern Colorado.

MSU safety Jeffrey Manning Jr. intercepted a pass of his own, his second of the season, with less than nine minutes left in the second quarter.

After the Bobcats took over at their own 24-yard line, MSU compiled an eight-play drive. This led to Isaiah Ifanse’s second touchdown of the day and a 21-point advantage.

In the fourth quarter, MSU junior linebacker Tadan Gilman added a pick on a fourth-down play to prevent Cal Poly from reaching the end zone. It was MSU’s fourth interception of the game and 11th in six games.

The Bobcats were tied for 14th in the country with seven interceptions entering Saturday.

When Manning considered transferring from Oregon State, he picked MSU in part because he knew Thomas as the pair grew up in California. He said whenever they did take the field together, it would be “fireworks.” He was proven right Saturday.

In the first quarter, Cal Poly’s Evan Burkhart appeared to make a catch for a first down, but Manning slammed him as soon as he did, popping the ball up in the air. Thomas, in a moment of impressive awareness, caught it and returned it to Cal Poly’s 20.

Simeon Woodard, an MSU true freshman cornerback who has filled in admirably as the Bobcats have navigated the last few weeks without Thomas and fellow corner James Campbell due to injury, first greeted Thomas after his interception. Soon after their celebration, Ifanse scored from seven yards out for a 14-0 MSU lead.

For the first time this season, Ifanse didn’t lead the Bobcats in rushing.

Instead, Tommy Mellott earned that honor and was named the player of the game. The true freshman from Butte lined up behind center and ran 74 yards for his first career touchdown, his only carry of the day, with just over four minutes before intermission. This gave MSU a 28-0 lead.

The pride of Butte TAKES IT TO THE HOUSE!!

While Ifanse didn’t have his best rushing performance on Saturday, he still made crucial plays for the Bobcats as usual.

He finished with 13 carries for 58 yards, 4.5 yards per attempt. However, he finished off drives when the Bobcats neared the goal line.

His first and second touchdowns of the day, both from less than 10 yards out, allowed MSU to take a 21-point lead in the second quarter. Then he also caught a 12-yard touchdown pass from Matthew McKay with 11 seconds before intermission for a 35-point lead.

Tyrel Thomas and Tommy Mellott were two of several players to lead the Bobcats to Saturday's Big Sky win.