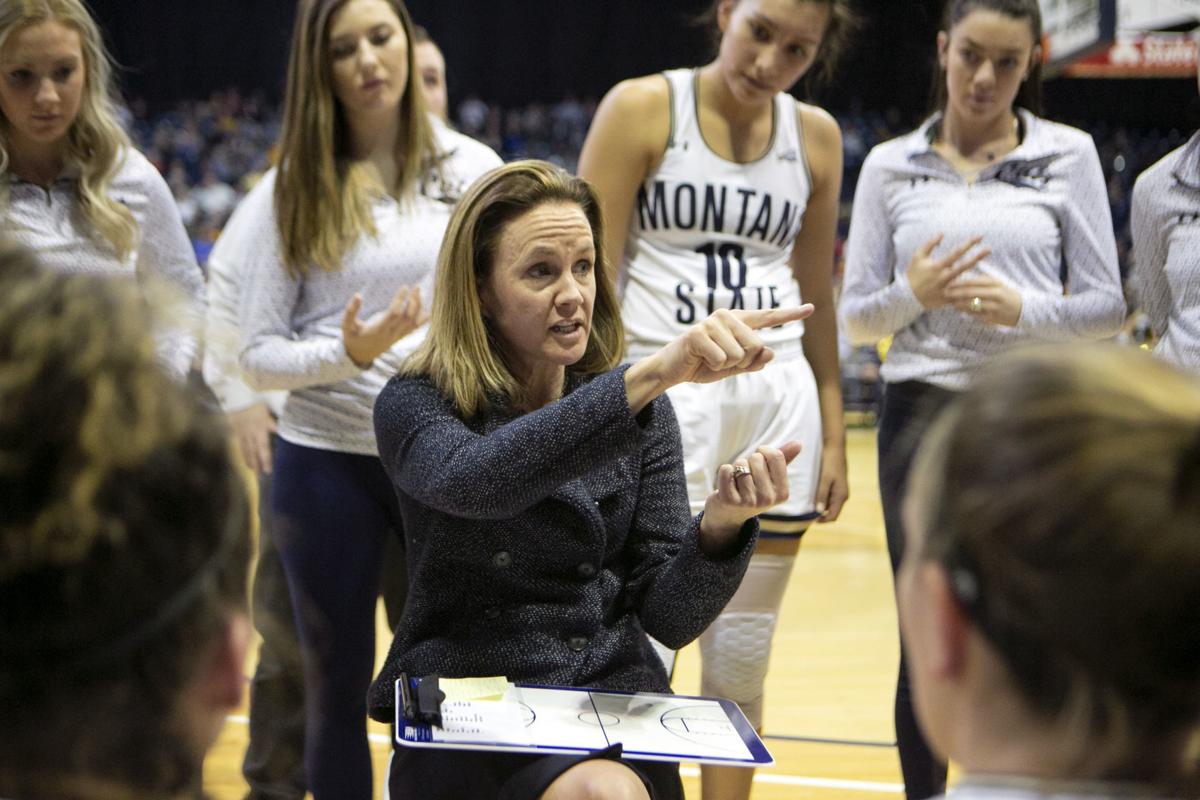 Montana State women's basketball head coach Tricia Binford sets up a play during a timeout against Northern Arizona on Feb. 29 at Worthington Arena. 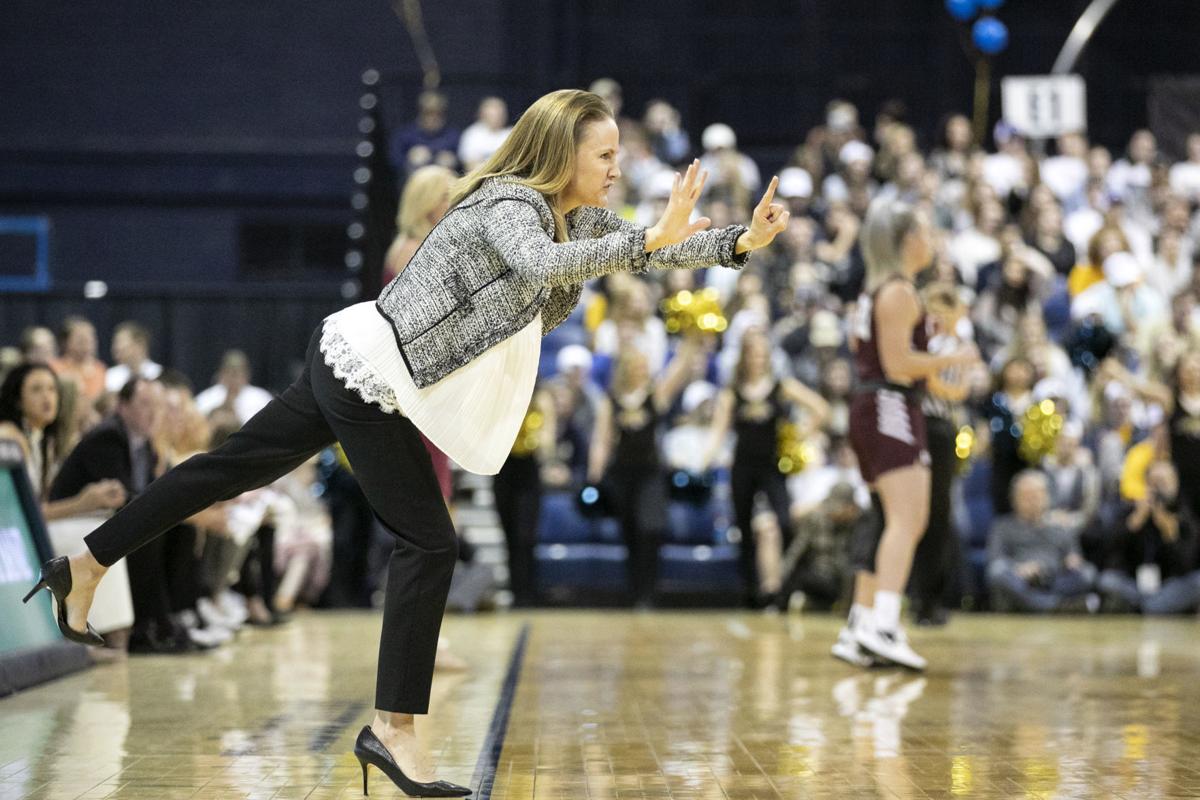 Montana State head coach Tricia Binford calls out a play to her team against Montana on Feb. 22 at Worthington Arena.

Montana State women's basketball head coach Tricia Binford sets up a play during a timeout against Northern Arizona on Feb. 29 at Worthington Arena.

Montana State head coach Tricia Binford calls out a play to her team against Montana on Feb. 22 at Worthington Arena.

BOZEMAN — Tricia Binford became the only women’s basketball head coach in the Big Sky Conference earning a higher base salary than their men’s basketball counterpart at the same school.

Binford has coached MSU for 15 years and won three regular season conference titles and one conference tournament championship. Sprinkle wrapped up his first season as a head coach in 2019-20.

This past year, the Bobcat women went 25-6 overall and won a Big Sky record 19 regular season conference games. They reached the conference tournament title game before it was shut down due to concerns about the coronavirus.

“Tricia has been at Montana State for a long time. She’s had a lot of success,” Montana State athletic director Leon Costello told the Chronicle. “I think it shows we are going to support programs and coaches and student-athletes that have success and longevity.”

Binford’s new contract, which runs through 2022-23, kept her as the highest-paid women’s basketball head coach in the Big Sky Conference based on base salary. Costello highlighted the Bobcats’ success on the court and academically as reasons to continue investing in the program.

According to the most recent U.S. Department of Education analysis available, Montana State led the Big Sky Conference in women’s basketball expenses in 2018-19 with $1,542,102 spent. Despite ranking sixth ($1,299,991) in women’s basketball revenue, the school invested more than any other.

“It’s extremely important to me,” Binford said of MSU’s administrative support. “I’m in a profession that it’s very unusual to stay at one place as long as I have. But the reason that we have is we feel like we’re going to do those exceptional things here at Montana State, and we have.”

While Binford’s base salary is higher than Sprinkle’s, she makes $25,000 annually for appearing on radio and television shows arranged by the school. Sprinkle makes $45,000 annually for similar responsibilities. Colleges usually collect more revenue for men’s basketball.

Montana State men’s basketball generated $1,833,808 in 2018-19, more than half a million dollars more than the women’s team. Most coaches in the conference have incentives and other bonuses or stipends built into their contracts.

When Binford was hired by the Bobcats in 2005, she wanted to build a championship program while also being surrounded with high character people. As she reflected on her tenure, she boasted about the people she’s worked with.

She described the culture at Montana State as “pretty remarkable” and said she feels the backing of Costello and MSU President Waded Cruzado.

“We have, I believe, the best president that you can look to from a leader’s standpoint, from a visionary standpoint. Just extremely motivational and inspirational for the rest of us,” Binford said. “And then an athletic director who’s continuing to break barriers as well.”

This past season, the Bobcats averaged 2,322 fans per home game, which ranked second in the conference. Only three schools in the Big Sky averaged more than 1,000 fans. Binford said how well her team is embraced locally — which is “not the norm across the nation” — factors into how successful she thinks she can be at MSU.

Costello noted Binford’s success has attracted attention from other schools potentially interested in hiring her. But the athletic director wants to find ways to keep Binford in Bozeman.

“As a coach, you want to have resources in place where you think you can be successful,” Costello said. “As long as those things are aligned and you’re getting support and you’re having success and you’re continuing to hopefully grow, you can always look (at other jobs) but why would you? I can’t speak for Tricia, but I can only control what I can control and, again, I want to support our programs in a way that helps them be successful.”

Binford is one of four women’s basketball head coaches in the conference who have coached at their school for more than a decade.

Idaho’s 12th-year head women’s coach Jon Newlee ($96,179.20 base salary) led the Vandals to a regular season conference title in 2016 and a conference tournament championship in 2019. UI’s first-year men’s head coach Zac Claus has eight career wins and a base salary of $130,000.

Seton Sobolewski has coached Idaho State’s women’s team for 12 years, has earned an NCAA Tournament trip and has a base salary of $110,011.20. Bengals men’s coach Ryan Looney, who was hired last offseason and won eight games this year, earns $115,000.

Big Sky Conference commissioner Tom Wistrcill declined to comment on salaries, saying they are institutional decisions that aren’t discussed at the conference level.

“I would love for everybody to be doing what Montana State’s doing,” Binford said. “Every program matters and gets supported. We feel that we’re getting that here for sure.”

That’s why Binford is grateful to be where she is.