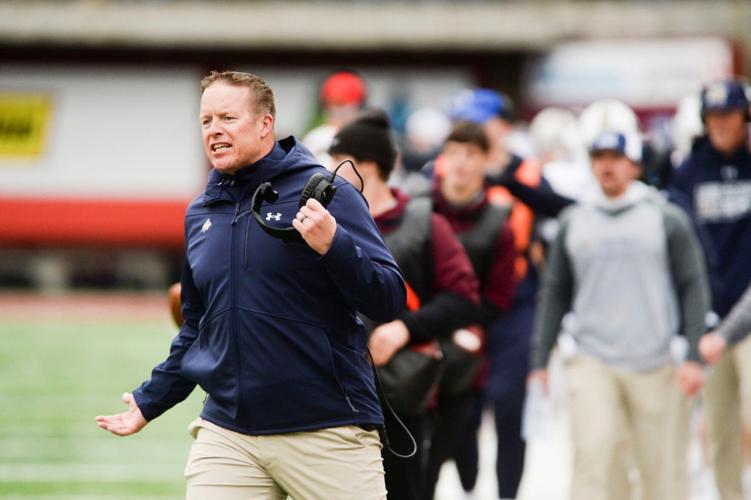 Montana State head coach Brent Vigen talks to a referee during a game against Montana on Saturday at Washington-Grizzly Stadium. 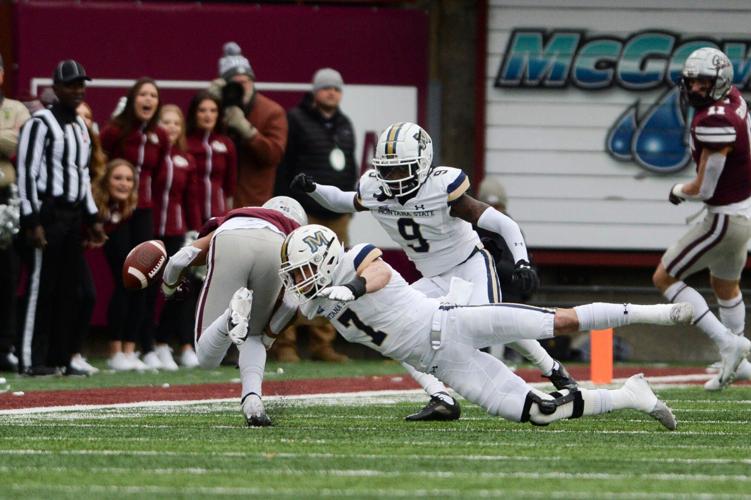 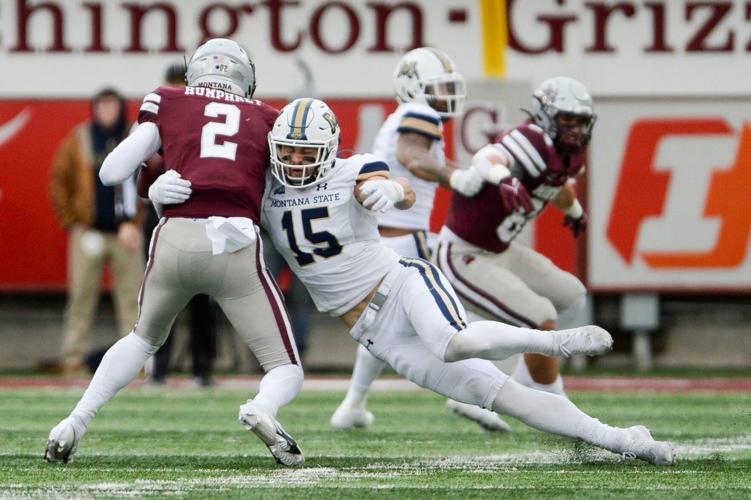 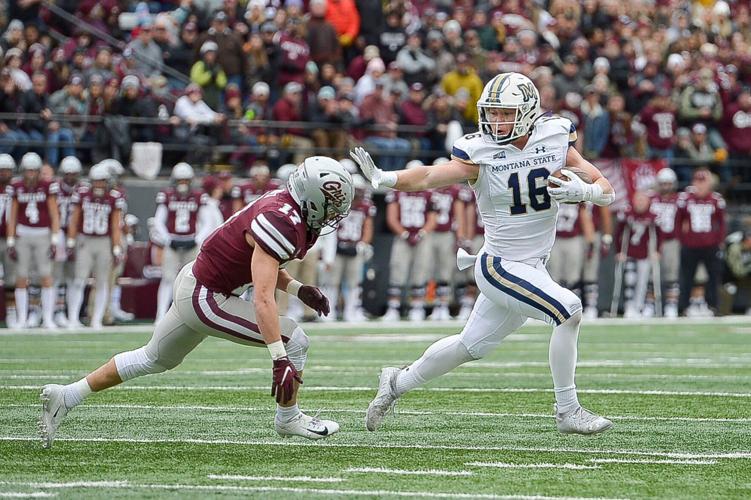 Montana State head coach Brent Vigen talks to a referee during a game against Montana on Saturday at Washington-Grizzly Stadium.

MISSOULA — As Troy Andersen dove to intercept a pass, Montana State suddenly appeared to have a chance to keep its winning streak against its rival alive.

The Bobcats were trailing by 16 points, but with the pick from Andersen, they had an opportunity to cut the lead to one possession.

But the offense sputtered again. The Bobcats lined up for a field goal and attempted a fake, but the ball ended up in the hands of Montana’s Justin Ford. He bolted for a touchdown.

“I feel terrible right now obviously,” Andersen said. “It's a huge game for the state of Montana. Being from Montana and just being able to play in the rivalry, it's been awesome and it's been an honor and obviously we didn't come out on the right side of things this game.”

At MSU’s newly-opened Bobcat Athletic Complex, a space is reserved for the Great Divide Trophy. It will no longer be its home.

For the first time in six years, the Bobcats were forced to watch as the Grizzlies paraded the rivalry prize around.

“It's unfortunate,” MSU head coach Brent Vigen said. “You feel terrible for our guys, because you could hear it in their voices. They want this. This isn't a matter of us not understanding the gravity of this game or wanting it. Sometimes football just takes its twists and turns, and we just didn't make enough plays.”

The Grizzlies lead the series 73-41-5. They won the game for the first time since 2015. Former MSU head coach Jeff Choate led the Bobcats to four straight victories after that.

“It was a good win over a good football team,” Grizzlies head coach Bobby Hauck said. “They’re very well coached. They’re sound in everything they do.”

The Bobcats were previously undefeated against FCS foes. The FCS playoff field will be announced Sunday, but even with the regular season-ending defeat, the Bobcats will likely receive a first-round bye.

“We have a lot of football left to play this year,” Andersen said. “All our goals are still in front of us. This loss won’t define us. Back to work. We’ll be fine.”

The Grizzlies, their seniors eager to beat the Bobcats for the first time, were in control from the beginning.

Cam Humphrey found Junior Bergen open in the middle of the field for a 74-yard touchdown on just the second play from scrimmage.

“It was just a breakdown in coverage,” Andersen said. “They obviously schemed us up fairly well and were able to get behind us and score.”

Humphrey’s strike to Bergen, a Billings Senior graduate who signed with MSU but switched to Montana after Choate left, gave the Grizzlies a 7-0 lead just 48 seconds into the game.

The pressure of the moment seemed even heavier than before kickoff.

“That’s certainly something where we allowed them to take (momentum). But it was still just one play,” Vigen said. “There were definitely opportunities for us to take it back. We just never did.”

The Bobcats’ offense was out of rhythm early. They mustered just 88 yards before intermission with 23 yards through the air as quarterback Matthew McKay was 4 of 10. They went three and out on three of their first six drives.

The Bobcats’ lone score of the first half followed a seven-play, 44-yard drive, leading to a 35-yard field goal by Blake Glessner. But even that was marred with back-to-back false starts, making a third and short a third and long to stall the possession.

Meanwhile, the Grizzlies totaled 236 yards in the opening two quarters. They punted just once following their seven first-half drives, but not all of their possessions ended in their favor.

Early in the second frame, the Grizzlies went for it on fourth down. But Andersen went untouched on a blitz to sack Humphrey in Bobcats territory.

On UM’s next drive, Bobcats safety Jeffrey Manning Jr. intercepted Humphrey to give MSU the ball at its own 7.

“I'm proud of the way everybody fought on the defense,” Andersen said. “Until the final whistle blew, we gave it everything we had. And obviously credit to Montana. They played really well today. They were probably more physical than us.

MSU kept the Grizzlies out of the end zone for a while after the Bergen touchdown. But Humphrey consistently found open receivers and finished 13 of 22 for 220 yards with two picks.

“They have a good front,” Humphrey said. “Going into this game, I knew that I was going to have to stand in there. When you stay in the pocket, you’re bound to take some shots. I was ready for that. I knew that I needed to do that to get us to move the ball down the field.”

Humphrey helped the Grizzlies get within field goal position often. Kevin Macias made 5 of 5 field goals, including a 50-yarder in the third quarter.

“Those are big points. If any one of those through that sequence doesn't go through the uprights, just that feeling coming off the field is so much different,” Vigen said. “That was big for him to be able to put those points on the board.”

The Bobcats intercepted two passes in the third quarter, but neither ended up being consequential.

MSU cornerback Simeon Woodard caught a pass from Humphrey, but the play was negated due to a penalty. Late in the third frame, Andersen dove for a pick, giving the MSU offense the ball back at UM’s 31.

But all it led to was more points for the Grizzlies. Ford’s 56-yard fumble recovery and touchdown gave UM a 23-point lead.

From that point on, the Bobcats still couldn’t sustain drives. McKay found Nate Stewart for a 20-yard touchdown with under a minute left, but it wasn’t enough.

After the final seconds of the game expired, Grizzlies players bolted for a corner of the stadium to pick up the Great Divide Trophy for the first time in half a decade.

Some Bobcats lingered and watched the festivities before returning to the locker room. They were eager to move on.

“We'll see where our playoff fate lies,” Vigen said. “We got a season in front of us, and we can't let this game define us. It hurts. It's the game that we obviously wanted and needed. We didn't get it.”

MISSOULA — With a 29-10 win Saturday at Washington-Grizzly Stadium, Montana claimed victory against Montana State for the first time since 2015.