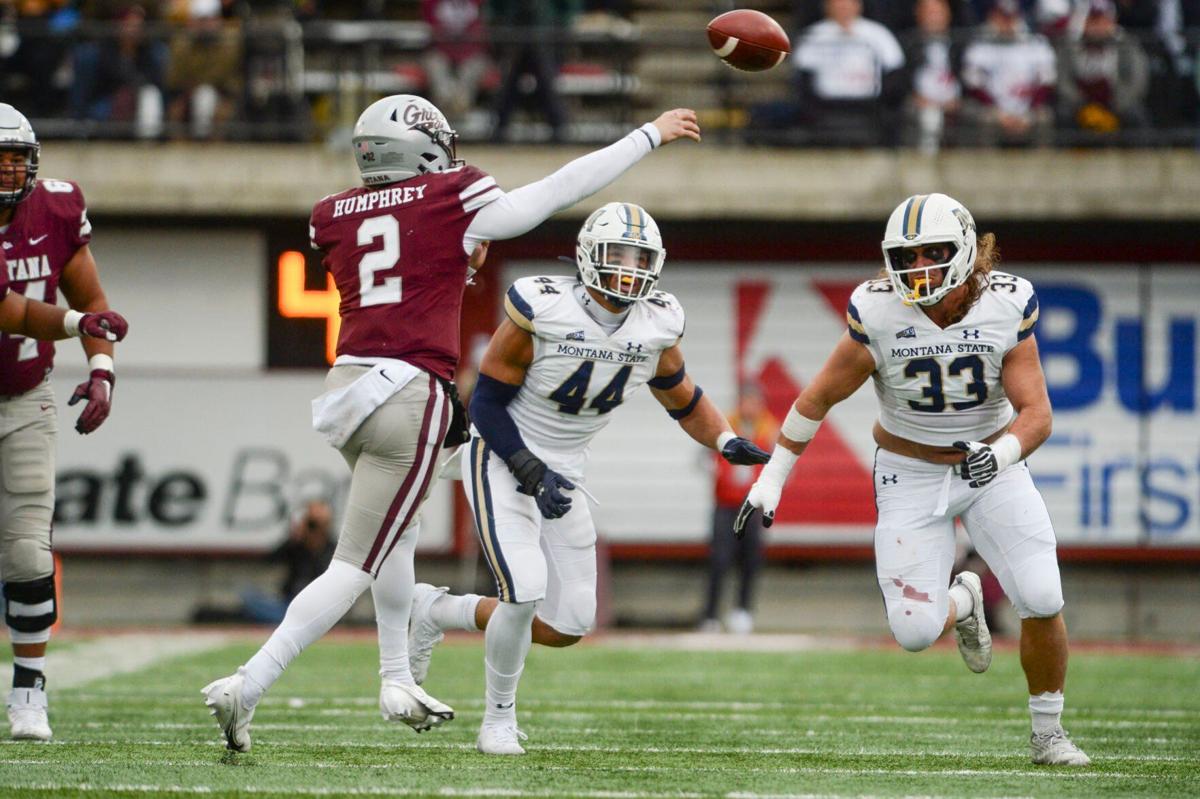 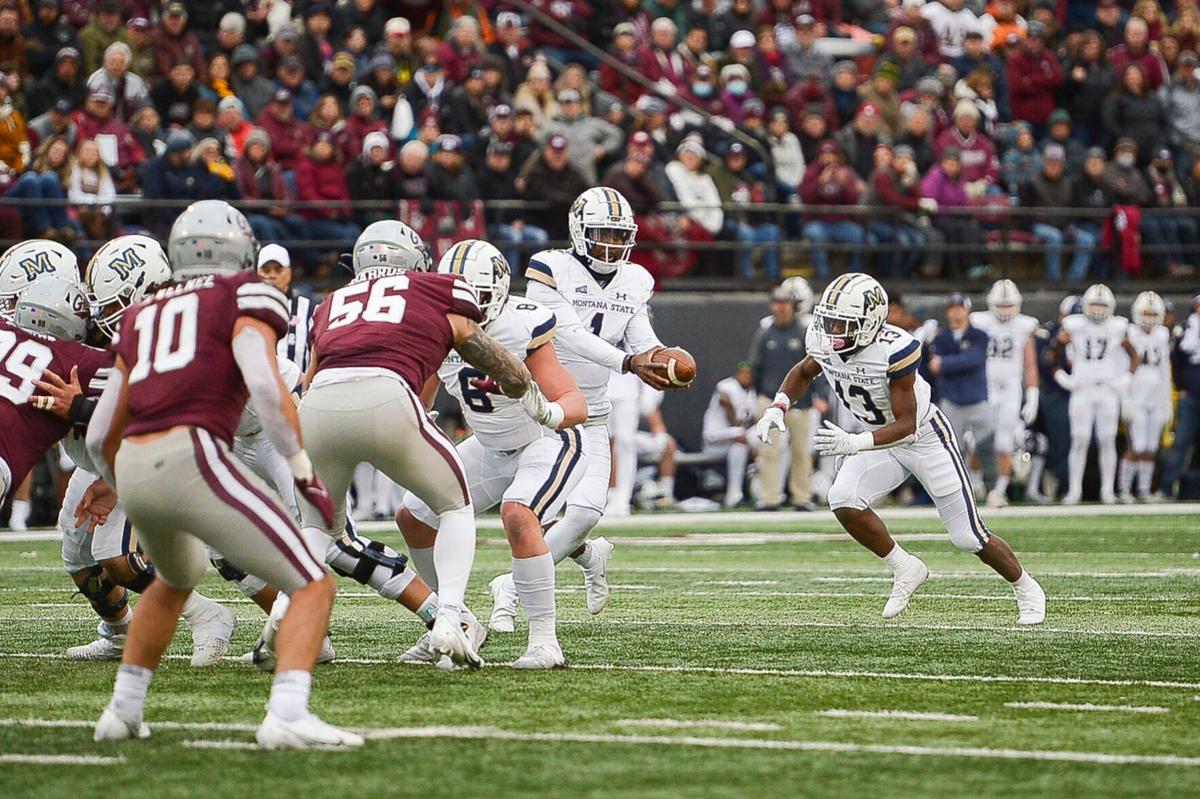 Montana State quarterback Matthew McKay hands the ball to running back Elijah Elliott against Montana at Washington-Grizzly Stadium in Missoula on Saturday.

BOZEMAN — The Montana State football team's postseason path had been decided about an hour before, and film of its next opponent was already being downloaded.

The Bobcats were eager to move on to the next phase of their campaign. During the FCS playoff selection show earlier Sunday morning, the first four teams were announced quickly, and MSU anticipated being one of the next four.

As the fifth, sixth and seventh teams were spotlighted, MSU head coach Brent Vigen felt some nervous energy. But then his team was on the screen at the Bobcat Athletic Complex, and the players erupted.

We're in! There's more football to be played in Bobcat Stadium. #GoCatsGo pic.twitter.com/OVBtd9vRZl

The Bobcats were excited and relieved to receive a first-round bye in the FCS playoffs. They’ll host a game at 2 p.m. Dec. 4 at Bobcat Stadium.

The Bobcats won nine straight games before losing the finale of their regular season at Montana on Saturday.

“There was a lot riding on that game yesterday, and we came up short. We're not happy about that,” Vigen said Sunday. “We’ve got to go back to the drawing board. We’ve got to come out of our analysis of yesterday with some answers as far as what we need to do to ultimately put our best foot forward, starting next Saturday.”

The Bobcats will host the winner of a first-round matchup between UT Martin (9-2) at Missouri State (8-3). If the Bobcats win, they could play at No. 1-seeded Sam Houston, the winner of the FCS spring season’s championship.

Missouri State’s head coach is Bobby Petrino, a Helena native who was head coach at Louisville, Arkansas and Western Kentucky. He also was the head coach of the Atlanta Falcons in 2007 before going to Arkansas.

“We’ve got to do what we’ve been doing all year long. We’ve got to have a great week of preparation,” Petrino said during an interview on ESPNU.

Montana State offensive lineman Lewis Kidd believes which part of the bracket a team lands on doesn’t matter much. At this point, every program has showcased talent.

“Anybody can beat anybody,” Kidd said. “If you're looking past an opponent or doing anything crazy like that, you're going to run into some trouble. Whoever comes to Bozeman in a couple Saturdays, we're going to be prepared for it.”

Vigen is familiar with Missouri State. He was a coach in the same conference at North Dakota State.

The Bears ended up second in the Missouri Valley. Vigen credited them for playing NDSU and FBS Oklahoma State well, two games which ended up within one possession.

“You’ve got to be as prepared as you possibly can. There literally is no tomorrow. Relative to the outcome, it’s win or go home. You’ve got to go out there and be able to play freely, play confident, play fast,” Vigen said. “The moment can’t be too big for us, as each one of these moments coming up, there’s going to be a lot on the line, too.”

In his time winning national championships at NDSU, Vigen learned how isolated the playoffs are from the rest of the season. A win, he said, means nothing about the outcome of a game the following week.

“It's tough. It's difficult,” Kidd said. “We agree that wasn't our best game, so pretty unfortunate. But at the end of the day, it's a new season.”

Vigen consistently pointed out during the regular season the Bobcats approached each week with a focused mindset. They didn’t linger on the past, and they didn’t think too far ahead.

That ultimately led to them winning nine consecutive games. Vigen also wants them to lean on that kind of thinking in the postseason. He told them their last game can’t impact the remaining opportunities the Bobcats have.

At the same time, Vigen doesn’t want the Bobcats to simply forget about last week’s game. They are seeking to learn from mistakes and improve.

That makes the first-round bye a well-timed one. Kidd pointed out players face a grueling mental and emotional toll over the course of a season. Some time off, especially with loved ones during a holiday, could be helpful.

The Bobcats will also have more spare time to practice, lift weights and watch film of their next opponent.

“Today's a new day. The sun came out this morning, and we knew we were going to be provided an opportunity to move on,” Vigen said. “We certainly have to regroup from our performance yesterday."

The Bobcats will also have more time to heal. Ty Okada, a defensive back who’s third on MSU with 66 tackles, was slow to get up and left the game after an attempted punt block at Montana. Vigen believes Okada will be back for the Bobcats’ next contest.

James Campbell and Tyrel Thomas, a couple of MSU’s top cornerbacks, also didn’t play last week. Vigen said Thomas has “continued to have setbacks” following his knee surgery in August and isn’t sure if he’ll play Dec. 4. Campbell is healthy, but after missing a portion of the season, he’s seeking to work his way back toward being fully ready.

CB James Campbell sat for the #BrawloftheWild but not for health reasons, Vigen said. He’s unsure about backup DB Tyrel Thomas, who was out with an injury.

Here are Vigen’s full comments on those two and Okada. #MSUBobcatsFB pic.twitter.com/0VZFOWJBwQ

“We’ve got to get James rolling,” Vigen said. “Fundamentally, your comfortability, your confidence, those are all things that we’re working back with him, and he's a competitive kid. So look for him to continue to make those strides to make an impact as we move forward.”

A Big Sky team hasn't won a national title since 2010.