MISSOULA — The University of Idaho will serve a two-year probation, has been fined $5,000 and will have other recruiting restrictions for several violations that were found during an NCAA probe into the men’s basketball program.

Verlin was the head coach of the Vandals for 11 years and also served a one-year show cause order.

“Vandal Athletics has cooperated fully with the NCAA through its investigation,” Idaho athletic director Terry Gawlik said in a statement to the Idaho Statesman. “As the recently appointed athletic director at Idaho, I continue to look for improved processes across our department.”

The violations mostly circle around recruiting and how two non-coaching men’s basketball staff members were used.

According to the negotiated resolution between Verlin, the University of Idaho and the NCAA, an undergraduate manager was used for coaching activities.

During this time, the undergraduate manager, who is not named, was doing many of the same duties following his promotion to director of men’s basketball operations. Compliance was not informed of the change in the manager’s responsibilities. During the period of violations, the manager was also engaged regularly in many on-court activities.

The violation was discovered in October 2018 during a spot check by compliance. Another violation was also discovered several months later, in February 2019, during a road trip in Montana when Verlin “impermissibly utilized” an undergraduate manager as a stand-in during a scout team walk-through when the team had several players injured and did not have sufficient players to have a full scout team. 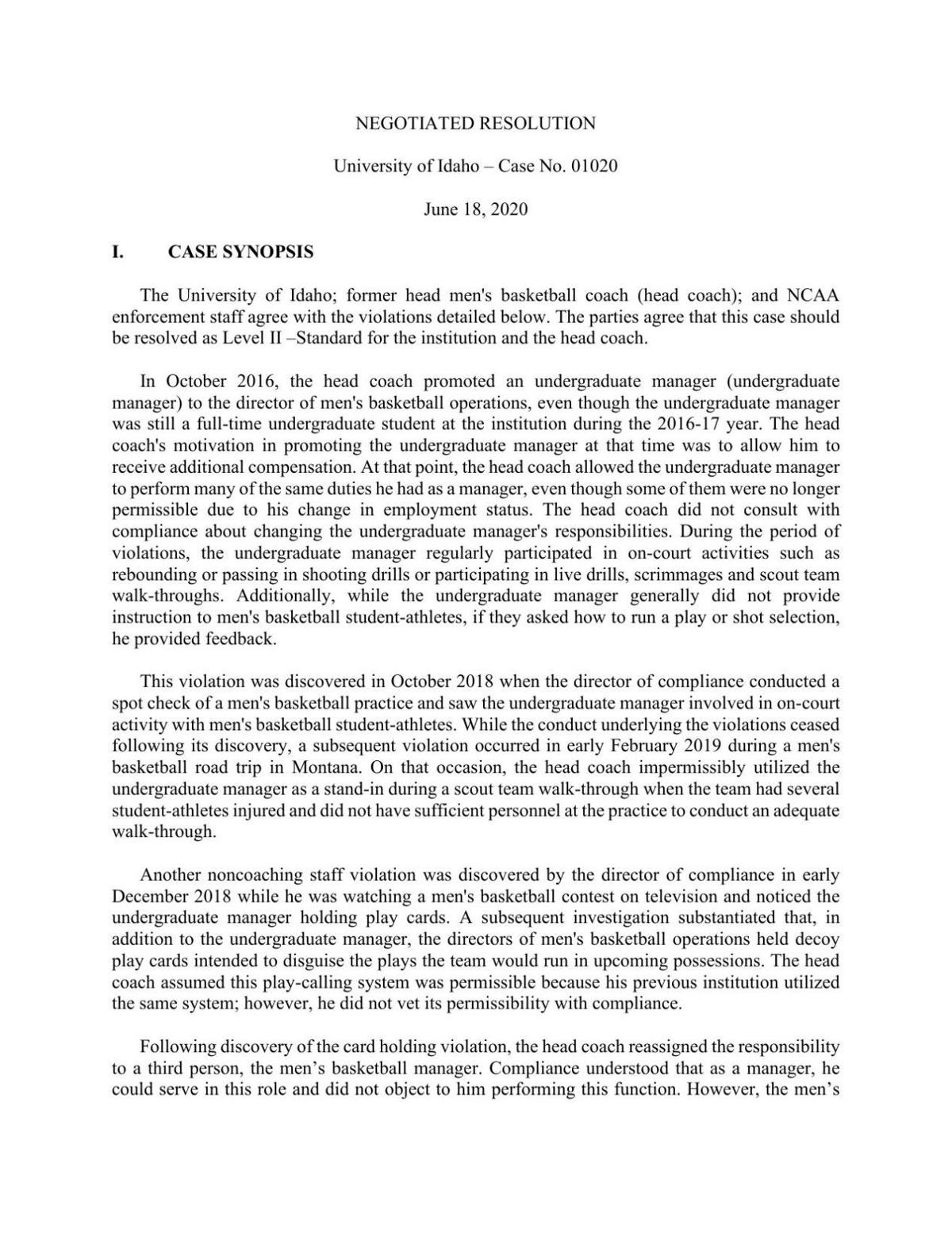 A play-card holding violation was also found as an undergraduate manager and the director of men’s basketball operations were found to be using decoy play cards. Following the discovery of the violation, which was minor, the play calling card responsibility was handed off to the men’s basketball manager.

The men’s basketball manager, which is a specific position outside of an undergraduate manager, can perform in this function, but only if they are in their final semester. An investigation found that due to an academic oversight, the men’s basketball manager was not eligible to perform this function because he was not technically in his final semester.

Unrecorded scrimmages including potential prospects were also an issue for Idaho, which meant they were in violation of countable athletically related activities (CARA). While the coaches were not actively engaged in the scrimmages that have been highlighted, sitting in the stands constituted an NCAA violation.

Together, the violations are in Level II territory. Some penalties have already been self-imposed by the Vandals.

Outside of the probation, fine and show-cause order, here are the other penalties Idaho will have to serve:

The Missoula Mavericks AA Memorial Tournament has been canceled on its second day.