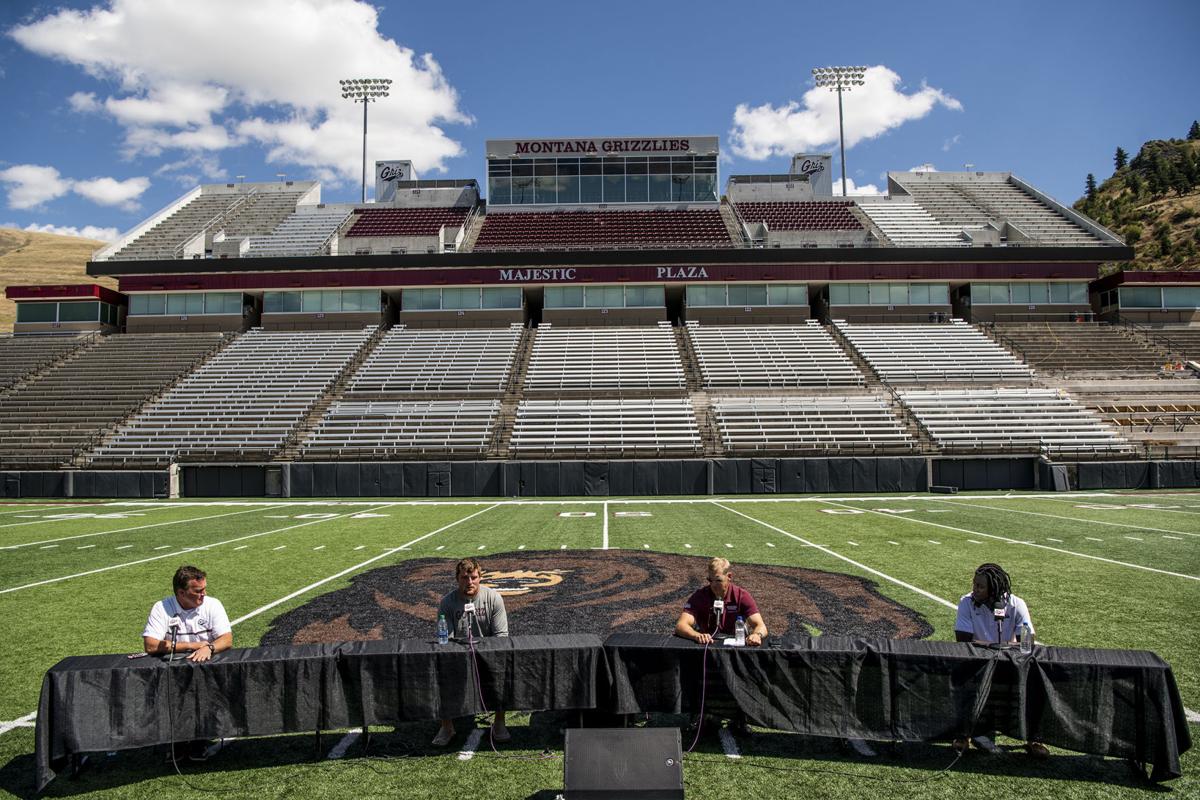 University of Montana athletic director Kent Haslam, Jace Lewis, head coach Bobby Hauck and Samuel Akem sit for a press conference on the field at Washington-Grizzly Stadium on Friday afternoon. The Big Sky Conference announced Friday morning that all football play will be postponed until spring. 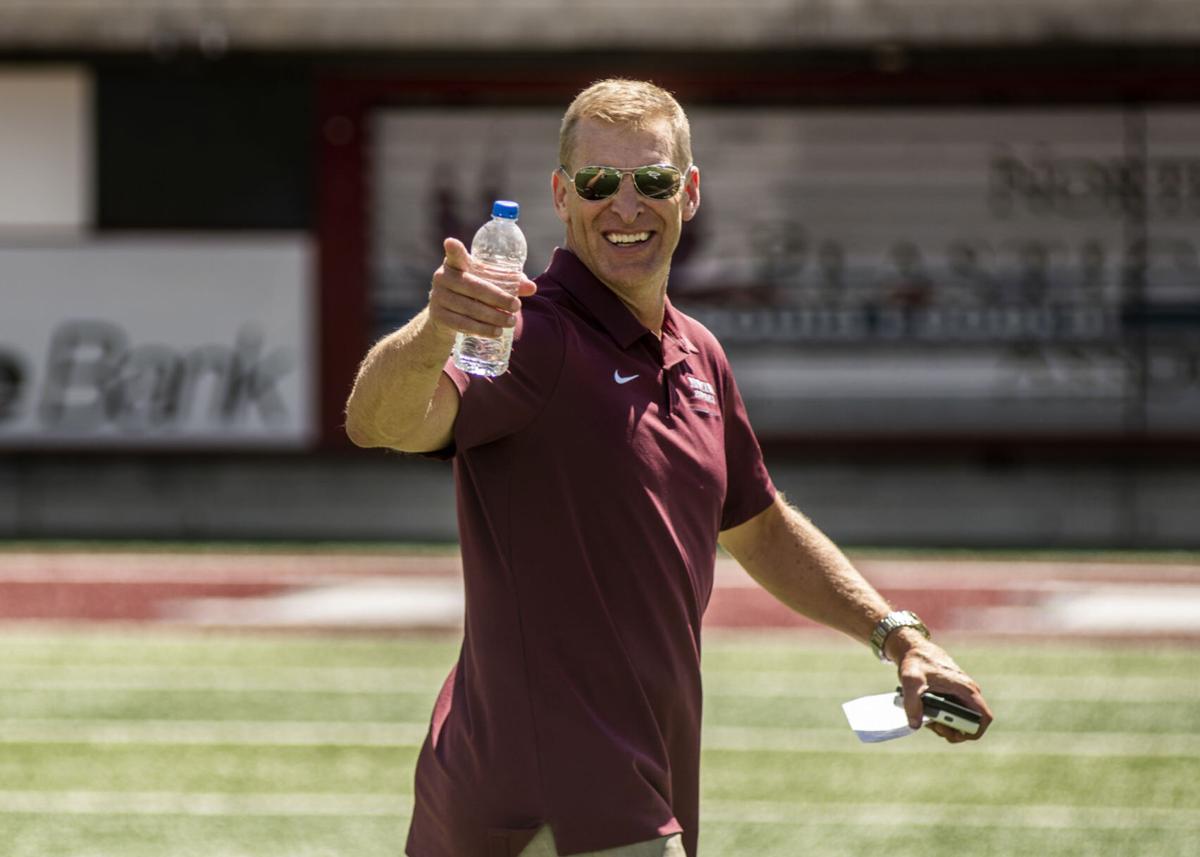 UM head coach Bobby Hauck leaves the field following the press conference on Friday. Hauck alongside players Samuel Akem and Jace Lewis all expressed their disappointment in the delay of the football season. 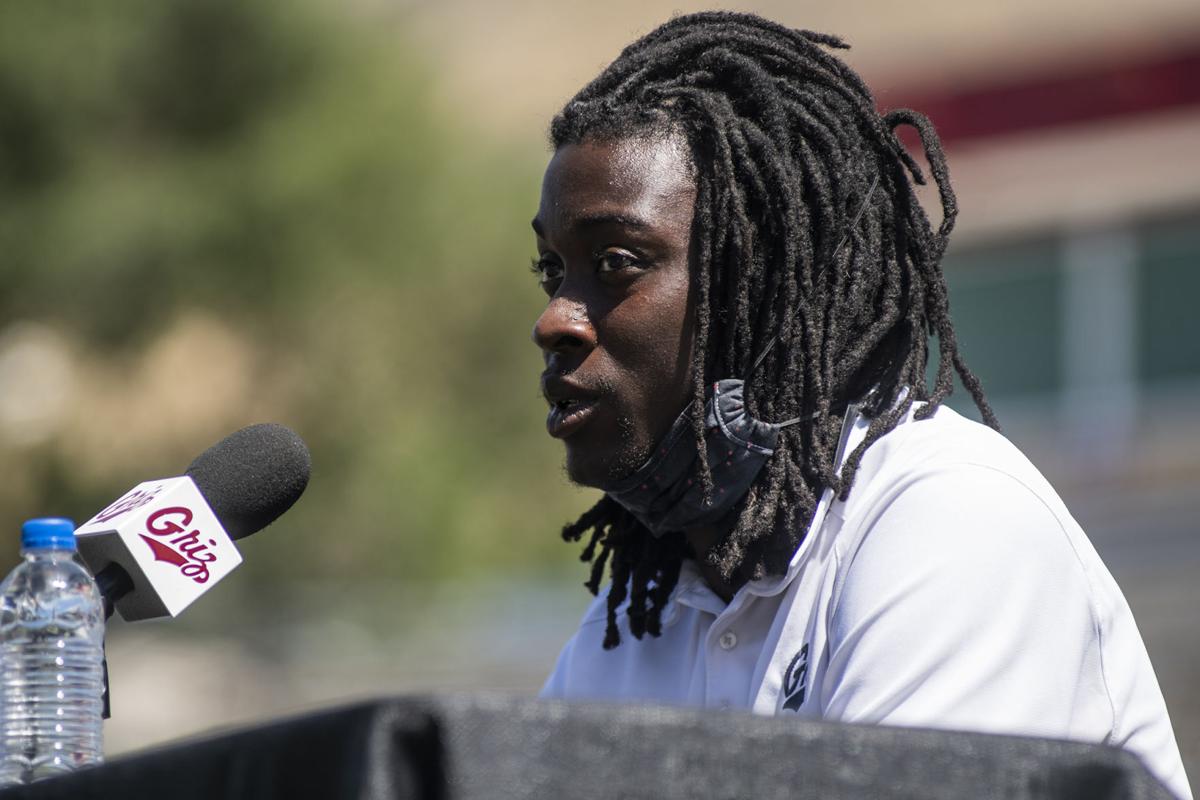 University of Montana athletic director Kent Haslam, Jace Lewis, head coach Bobby Hauck and Samuel Akem sit for a press conference on the field at Washington-Grizzly Stadium on Friday afternoon. The Big Sky Conference announced Friday morning that all football play will be postponed until spring.

UM head coach Bobby Hauck leaves the field following the press conference on Friday. Hauck alongside players Samuel Akem and Jace Lewis all expressed their disappointment in the delay of the football season.

All of those words were used by either Montana athletic director Kent Haslam, head football coach Bobby Hauck, linebacker Jace Lewis or wide receiver Sammy Akem as they sat at a series of tables across the 50-yard line of Washington-Grizzly Stadium on Friday afternoon, talking about the Big Sky Conference’s decision to move its fall football season to the spring.

Who would’ve thought back when spring camp began in early March that the Grizzlies would’ve been spending what was supposed to be their first day of fall camp instead talking about not getting to play?

And who would’ve imagined football games and potentially a national playoff being played in the spring, something so foreign to most anyone who’s ever strapped up the pads?

“Certainly disappointing, heartbreaking for our student-athletes,” Haslam said about not playing this fall. “This decision by the conference wasn’t made without a lot of deliberation and a lot of discussion. … This brings some closure. I think that’s good. We at least now know where we’re going and what we’re doing. But I’m disappointed. … I love college football. I love being in this place on a Saturday afternoon, and I love watching these student-athletes compete.

“I’m hopeful for the spring, I’m hopeful for what that can become and look forward to getting anxious. Was able to meet with the team today at 10 and just so impressed with this group of young men and their coaches. They bring me great hope for the future, and their optimism and their dedication, we’ll look forward to spring, and we’ll call on Griz Nation to continue to support and continue to be there for us like they’ve always been and we’ll move on.”

The sunny day contrasted with a somewhat somber mood. Haslam even noted how the dozen-plus people gathered on the field were eerily silent as he walked out of the Topel Tunnel to take his seat to the right of Lewis, a Townsend native and the Big Sky preseason defensive MVP.

Lighthearted moments were interspersed from time to time.

Haslam joked he was the last to arrive because he was looking at bringing back the Wishbone offense, drawing a laugh from Hauck. Later, Hauck told a media member he was fined because his phone rang during the news conference. Haslam also commented that the plane flying over was a practice for the flyover for homecoming weekend. And Hauck said he’d enjoy returning to college for another year if possible when the talk turned to the seniors’ possibility of being at school longer than expected if they stay to play in the spring or possibly next fall.

Maybe those moments were their way of trying to lighten the mood while confronted with once-in-a-lifetime circumstances. Or maybe after sitting on pins and needles caused by NCAA indecision they finally had a chance to breathe because they have a better idea about what the future of Griz football may hold for this school year.

Either way, there wasn’t any overt celebration about the season being moved to the spring, a decision that Hauck felt was irrelevant for him to say whether it was the right or wrong choice. He simply said “it’s disappointing” because of the devotion and investment numerous people put into returning to dominance, a progression that can’t continue while the team is sidelined. And he didn't want to talk about the validity of a spring season until he digested that idea some more.

“Our players, our coaches and really probably the entire state of Montana are disappointed and frankly probably pretty depressed that we aren’t playing,” Hauck said while sitting at the site of the Grizzlies' 73-28 playoff win over Southeastern Louisiana last season, their first playoff victory since 2015.

“You know, thanks to great effort by our players, by our medical staff, by our strength coaches, we’ve had an unbelievably good summer of preparation for what was to be this season. We’re ready to go, and as it turns out, we’ve got to delay that, which is too bad. But when the time comes to play, we’ll be ready.”

He added: “To not be able to go is a really bitter pill, especially when you’ve got a team that’s as tight as this one is, is as well-prepared as this one is and loves each other as much as these guys do and really enjoy being in the locker room or competing together.”

This was supposed to be a big year for the Griz. It was going to be the third year since Hauck returned and the schedule set up for a potentially undefeated run leading up to the Brawl of the Wild one year after they made it to the FCS quarterfinals in a breakout 2019 campaign.

That’s all on hold now. The players who put in all the work — the January conditioning, the individual workouts at home during quarantine, the voluntary practices starting in June and the player-run practices over the summer — won’t see any immediate payoff. That was work done by a group that Lewis felt was "probably the closest team we've had" in his time at Montana, one that he feels gets along well, likes to joke and is loaded with talent.

“Going into fall camp, everything was so unknown. I think everybody had an idea that it could happen, but we just kept preparing like it wasn’t going to happen,” Lewis said of the fall season being postponed. “When coach Hauck told us yesterday that they postponed it, I feel like every senior had the same reaction, and it was pretty shocking a little bit and I mean, depressed because everybody wanted to play this fall and we have a really good team like coach Hauck was saying, so it bummed me out, I know that.”

Lewis would rather be playing this fall, as would Akem. They agreed they’d prefer to play in the fall of 2021 instead of the spring of 2021, but that would require the NCAA to extend their eligibility because they’re both in their fifth and final year of eligibility.

There could be a silver lining for players like Akem, who’s coming back from an injury last season, as they get more time to get in tip-top shape before the spring. But Hauck noted that sitting out this fall doesn’t help the team from an attitude standpoint.

Akem seemed to find solace when he recognized more time in college with his teammates couldn’t be all bad and that there is still some added motivation to prove people wrong by winning games — whenever they get the chance. The next step in the path to that may begin with a modified spring camp and scrimmages taking place during the fall semester in preparation for a spring unlike any other.

“You think about the work we put in starting in January and just the endless hours that we commit to this game and to this university and just to everything that we put into this program, it’s just tough that we’re not going to get to see the fruits of that labor right now,” Akem said. “It’s like coach Hauck told us yesterday, patience is a virtue. Right now, more than any time, that is the most important thing.

Northern Arizona University is going ahead and charging students the $150-per-year athletics fee, and the $96-per-year student services fee could be charged, the school confirmed this week. And Northern Arizona isn’t alone — the other Big Sky Conference schools are also opting to do so.