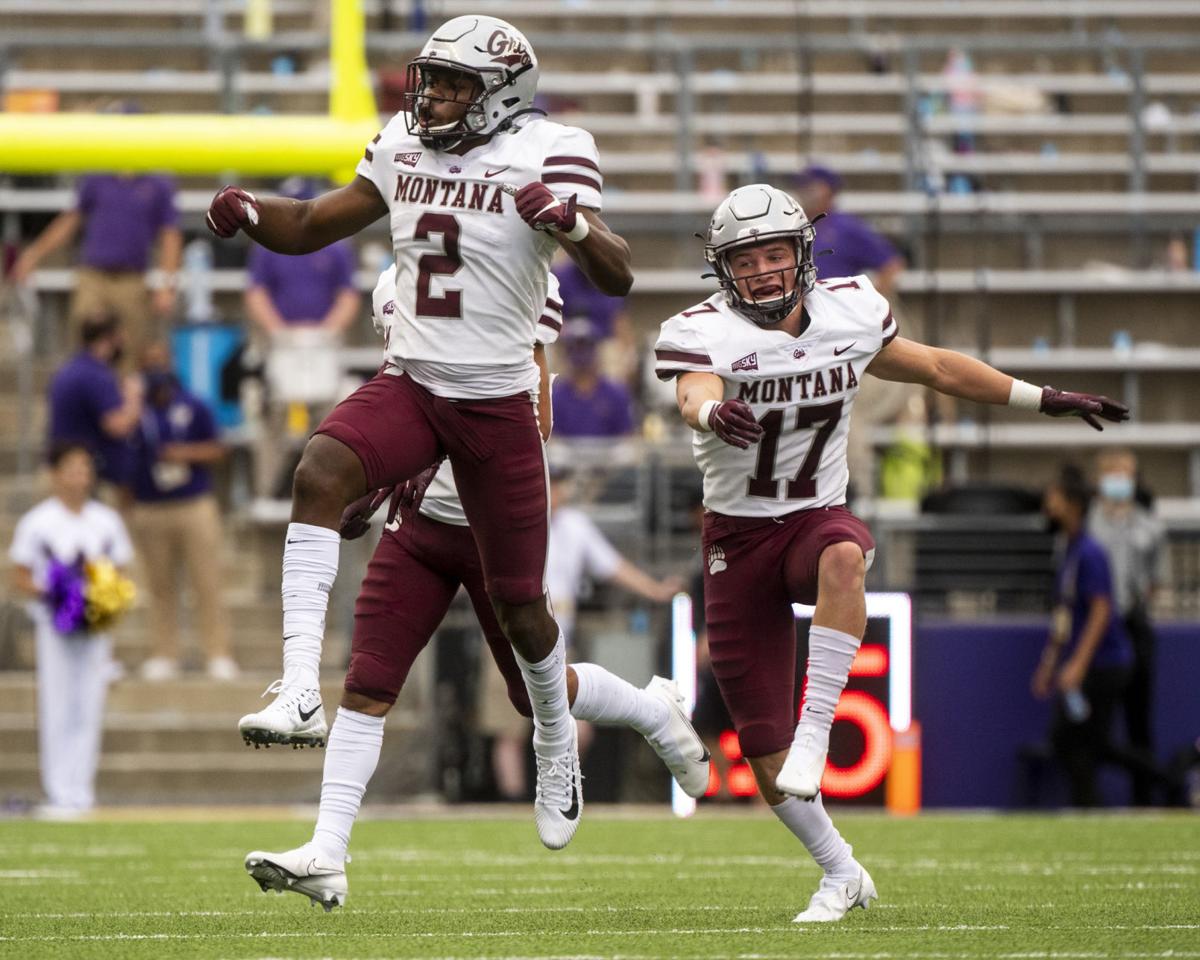 Montana’s Gavin Robertson (2) celebrates alongside Robby Hauck (17) after making a stop on third down during the college football game between the Griz and University of Washington at Husky Stadium in Seattle, Wash., Saturday, Sept. 4, 2021. 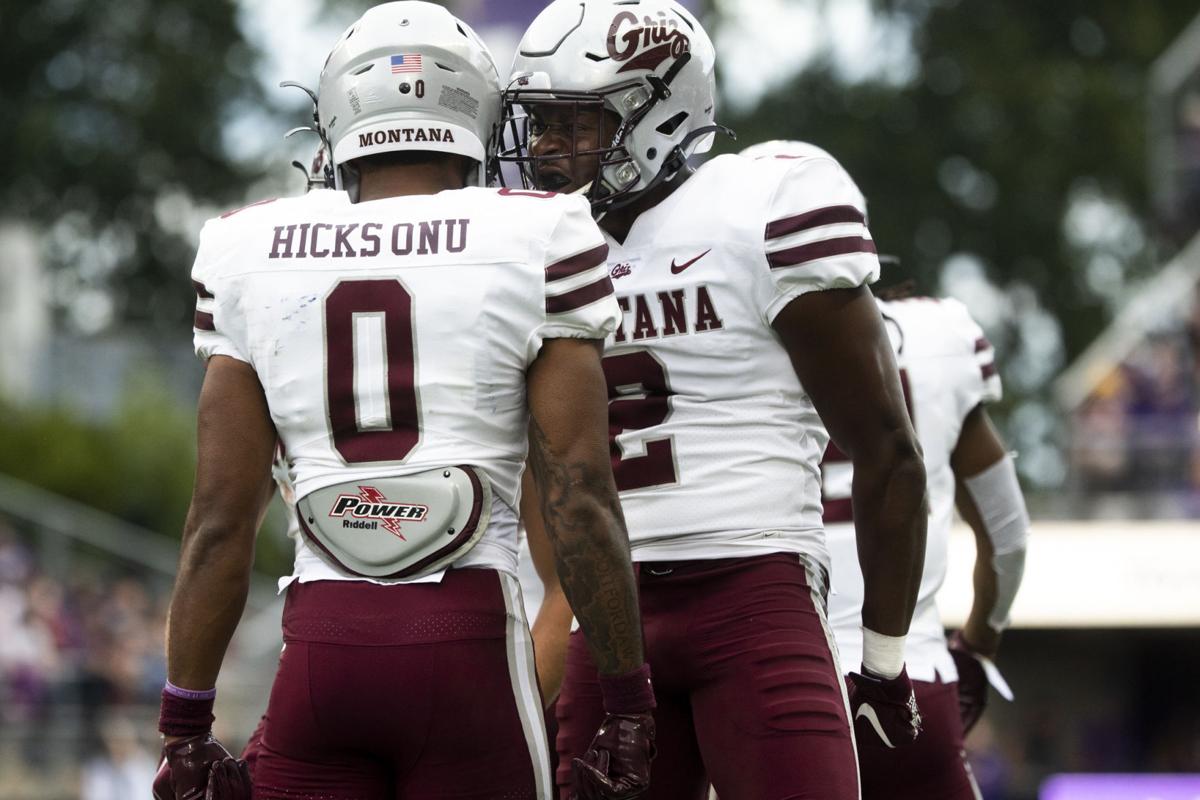 Montana’s Gavin Robertson (2) celebrates with Omar Hicks Onu (0) during the college football game between the Griz and University of Washington at Husky Stadium in Seattle, Wash., Saturday, Sept. 4, 2021. 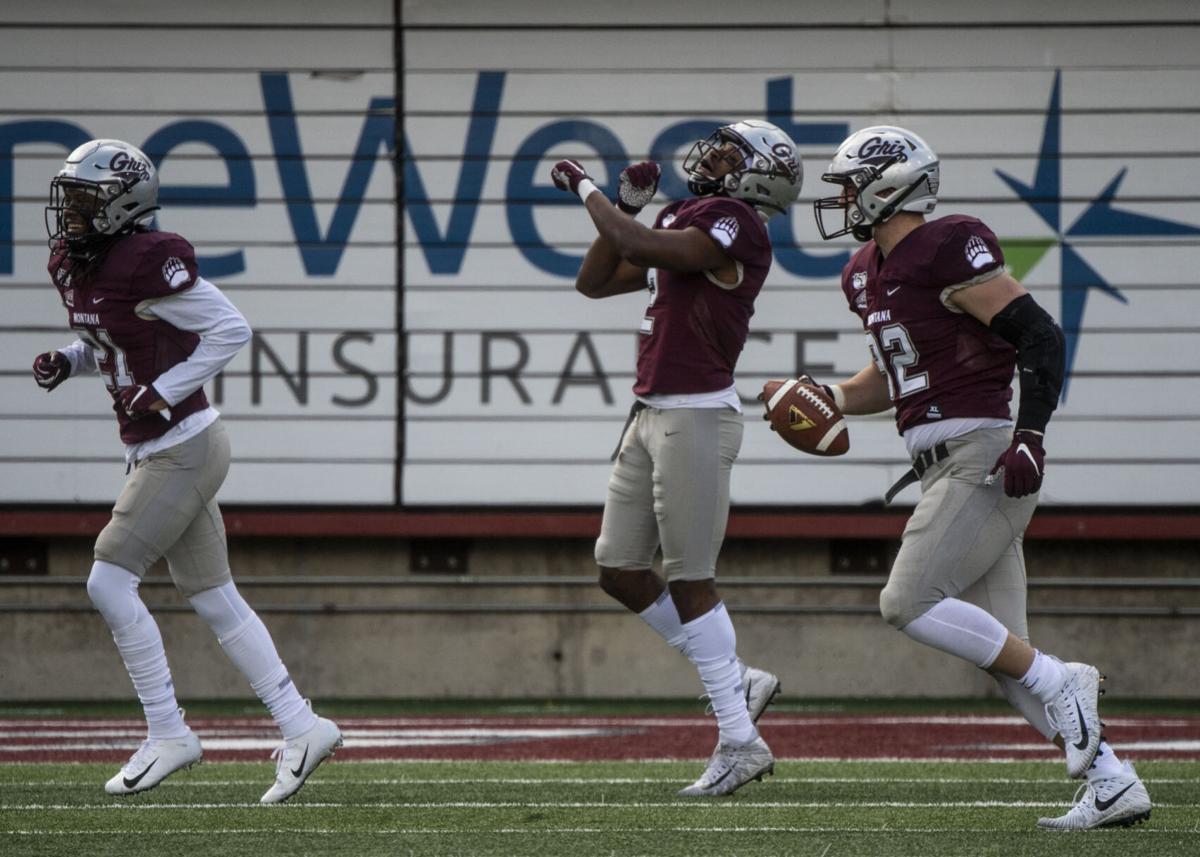 Montana safety Gavin Robertson (2) celebrates alongside Justin Ford (21) and Jacob McGourin (92) during the win over Central Washington on April 10 at Washington-Grizzly Stadium in Missoula. 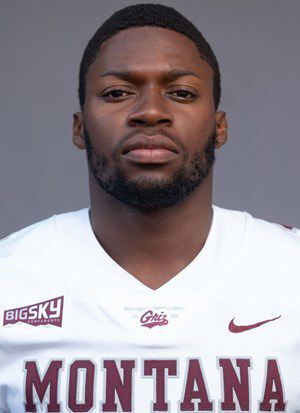 Montana’s Gavin Robertson (2) celebrates alongside Robby Hauck (17) after making a stop on third down during the college football game between the Griz and University of Washington at Husky Stadium in Seattle, Wash., Saturday, Sept. 4, 2021.

Montana’s Gavin Robertson (2) celebrates with Omar Hicks Onu (0) during the college football game between the Griz and University of Washington at Husky Stadium in Seattle, Wash., Saturday, Sept. 4, 2021.

Montana safety Gavin Robertson (2) celebrates alongside Justin Ford (21) and Jacob McGourin (92) during the win over Central Washington on April 10 at Washington-Grizzly Stadium in Missoula.

MISSOULA — Gavin Robertson didn’t need anyone around Missoula to remind him in August that football was going to be back in a matter of weeks, then days.

His father would bring up the topic during their daily conversations heading into Robertson’s final season. Making it more exciting was that Robertson would be opening the year right down the road from where he grew up in Washington.

“My dad was dang near as excited as me,” he said. “It feels like he’s still playing.”

Robertson intercepted two passes in the upset win over Washington. It was a solid start to his third season as a starting safety at Montana, where he’s been a consistent contributor who might go underappreciated from time to time.

The fact that Robertson is in this position required him to leave the bright lights of the Pac-12 to come to the Big Sky. It’s a move he’s glad he made because it reignited his passion for football.

“Most definitely it feels like it was the right move,” he said. “I just knew coach (Bobby) Hauck was coming here and knew his track record. It was definitely a great move. I’m happy I did it.

“And I’m playing what I want to play. I love the coaches. I love (safeties) coach Shann (Schillinger). I love how they run the system. Just everything. I love my teammates. I love it all.”

Robertson had been recruited to Arizona as a safety but was moved to linebacker after his redshirt season. He wasn't having fun, felt he was good enough to play safety and wanted to prove he could do it.

Robertson believed in himself after coaching changes at Arizona and found a landing spot in Missoula when Hauck was hired to lead the Griz.

“We sold him on the fact that this would be a good opportunity for him and a good place for him,” Hauck said. “It’s for him to say whether it has been or not, but I think it’s been tremendous for him, and it’s been great being around him. I just think that he’s a great dude. I’m glad we got him.”

Robertson’s move to UM was aided by a high school assistant coach, Kent Rodseth, who knew Hauck from when he coached high school while Hauck was a Colorado assistant in the 1990s. His former high school teammate, ex-Griz quarterback Gresch Jensen, helped nudge him to UM.

“I thought the success he’s having at Montana would’ve been the same success no matter where he went,” Rodseth said. “He’s always worked so hard for what he wanted. It’s nice to see it pay off.”

The Griz are getting back to the winning ways Robertson thought might be possible when he transferred. They made the FCS quarterfinals in 2019 and are 2-0 this season with a win over FBS Washington, while Arizona is on a 15-game losing streak.

Robertson called his father, Gavin Robertson Sr., when he was considering leaving Arizona.

He’s long looked up to his father, who he considers his role model. He wanted to play college football like his father, who played linebacker at the University of Hawaii with a hard-hitting presence that Robertson has tried to emulate.

He always wanted to wear jersey No. 5, the same number his father wore. It wasn’t available when he came to UM, so he picked No. 2 because he’s Robertson Jr.

“I wanted to be just like him growing up,” he said. “He’s an all-around good dude. Family man. Everything. He played football, and I didn’t know anything else. I just knew him and knew what he did and just wanted to be like him.”

As Robertson set his mind on playing in college, he turned heads in high school. ESPN ranked him the No. 52 safety in the country for his recruiting class in 2016.

Robertson went on to be Auburn Mountainview’s first-ever Pac-12 scholarship football player, even after he fractured his left fibula in October of his senior season. In addition to Arizona, he received offers from FBS schools Boise State, Hawaii, Wyoming, New Mexico and Idaho.

Jensen quickly took notice of Robertson as high school teammates in the defensive secondary. The earliest memory and the most persistent memories for Jensen are the punishing hits Robertson delivered on players.

“He was the backbone of our defense,” Jensen said. “It’s cool to see him doing so well.”

Robertson’s physicality impressed Rodseth. His speed was glaring on the track, where he excelled in the 100-meter dash, long jump and triple jump, which helped him gain traction with Pac-12 schools because of his measurables in a 6-foot-2 frame.

One hit against crosstown rival Auburn High School showed his combination of those skills.

“He hit a kid so hard on a jet sweep flying downhill that it looked like somebody grabbed the kid and threw him back 5 yards,” Rodseth recalled. “The flag came out and, I’m standing right there, and I was like, ‘What did he do wrong?’ The official said, ‘It sounded like a foul.’ I’m like ‘What?’ He’s like, ‘I’ve never heard that sound before.’”

Wide receiver Sammy Akem recalls Robertson laying hard hits on him when Robertson got to campus and tried to prove he belonged. Fellow safety Robby Hauck recalls being wowed by Robertson’s size for being a safety when they first met.

Robertson has kept up those punishing hits as he’s lost weight to get in better physical shape. He had gotten up to 230 pounds when Arizona moved him to linebacker, but he shed weight down to 207 at UM before settling in at 215 this fall.

“I think he’s probably the toughest guy on the field,” Robby Hauck said. “He battles through everything, injuries, getting hurt, whatever. It doesn’t matter, he’s going to lay his body on the line for our team.”

When Robertson was a kid, he wanted Reggie Bush Adidas football cleats, so his parents sacrificed and saved money to buy them.

He learned from them the importance of dedication and hard work as they worked long hours, leading to him and his two sisters spending many days with their grandmother. He saw that again in recent years when his mother finally graduated from college.

For as much as Robertson’s physicality on the field is readily apparent, the mental aspect of his play stands out to those around him. His major is psychology because he’s interested in how the mind works, and he’s taken lessons from classes onto the field about staying level-headed and in a positive mindset.

“He’s easy going,” Robby Hauck said. “He can make a joke out of everything. He’s got a great laugh, a great smile and a great attitude. So, he’s easy to be around. I love him.”

It wasn’t always smooth sailing for Robertson. He wasn’t allowed to play varsity football as a high school sophomore after transferring. Rodseth felt that hurt his recruiting stock, but Robertson started both ways on junior varsity that season while showing his mental maturity.

“He was obviously upset with it,” Rodseth said. “He just did what he was supposed to do. He played hard and practiced hard and got in the weight room and did all those things. He would practice with varsity all the time. He was even coaching up the kid who would’ve been his backup but was starting on varsity. He was very mature.”

Robertson’s studious nature has impressed Bobby Hauck, who’s seen his knowledge of the game grow over the years. It creates something special when combined with his on-field abilities of good movement, tackling and reading the ball.

“Gav’s a conscientious studier of the game plan and of the opponent,” Bobby Hauck said. “He understands what we’re trying to do and does it really well. There’s a reason why he’s a good player. He studies, he understands and he’s a good athlete.”

Robertson has yet to land on an All-Big Sky postseason team, but he said he’s not concerned with individual awards. He’s not someone who likes to promote himself anyway, preferring to let his play do the talking.

His only goal this season is to end his career with a national title.

Montana offensive lineman Hunter Mayginnes has started every game this season after he transferred from Washington State over the summer.