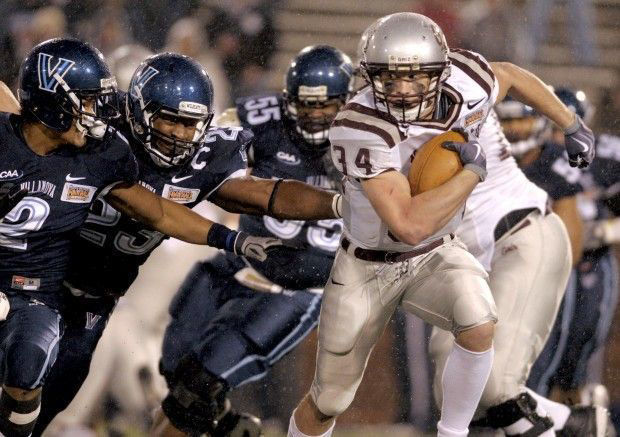 Montana running back Chase Reynolds tries to get around Villanova's Fred Maldonado, left, and Osayi Osunde during the 2009 FCS championship game in Chattanooga, Tenn. Villanova's 23-21 win marked the last time the Griz made it to the title game, ending a stretch in which they played for the crown seven times in 15 seasons. 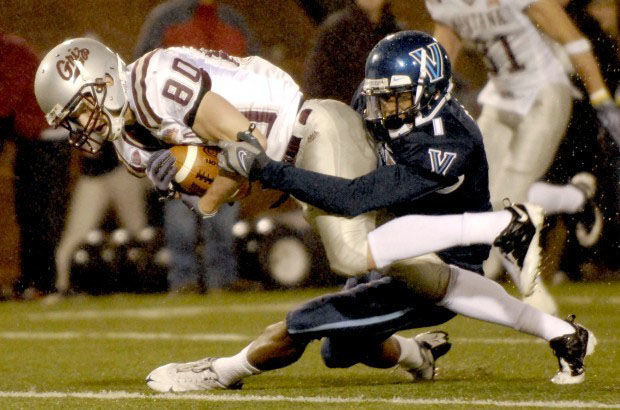 Montana's Marc Mariani scores the Grizzlies' first touchdown in the first quarter as Villanova's James Pitts tackles him during the 2009 title game.

Montana running back Chase Reynolds tries to get around Villanova's Fred Maldonado, left, and Osayi Osunde during the 2009 FCS championship game in Chattanooga, Tenn. Villanova's 23-21 win marked the last time the Griz made it to the title game, ending a stretch in which they played for the crown seven times in 15 seasons.

Montana's Marc Mariani scores the Grizzlies' first touchdown in the first quarter as Villanova's James Pitts tackles him during the 2009 title game.

MISSOULA — When Bobby Hauck and his Montana Grizzlies walked off the field in Chattanooga, Tennessee, on Dec. 18, 2009, there was obvious disappointment about losing the FCS national championship game.

But it was Montana’s second consecutive appearance in the title contest, its third in six years and its seventh in 15 years, so the Griz would surely be back soon, the thinking was, as they tried to add to their collection of titles in 1995 and 2001.

However, that hasn’t been the case. It’s now a decade later, and Montana is still trying to get back to the level the once-proud program expected to be at on a yearly basis.

With the return of Hauck, Montana has begun to turn around its program and is the No. 6 seed heading into its first playoff appearance since 2015 and the first playoff game for Bobby since the loss to Villanova 10 years ago.

The Griz haven’t even made it to the quarterfinals since 2009, excluding the now-vacated 2011 semifinal appearance. So just imagine telling people after the loss to Villanova that it’d be a decade later and Montana wouldn’t have made it back to the championship game.

“I would have said, ‘No, you’re absolutely crazy,’” said Robin Pflugrad, an assistant coach on the 2009 staff who took over as head coach from 2010-11. “That would have been my first response because there’s a ton of tradition at Montana. There’s always a support for the football team from the administration, the university and the community.

“I think at that time everything was in place to continue a great tradition. I would have thought that was nonsense. I would say that you’re absolutely crazy and the Griz would continue to roll.”

Any why not? Montana had been to the playoffs for 17 consecutive seasons at that point. That string of appearances came under four different head coaches.

Montana continued to produce great individual talent all the while. The Griz had seven players drafted into the NFL from 2010 to 2016.

So the fall from national stardom shocked current Montana players who grew up with their initial Griz fandom coming during Hauck’s streak of seven consecutive Big Sky titles.

“I would’ve said you’re crazy,” Montana junior and Kalispell native Brandon Purdy said. “That wouldn’t have made any sense to me.”

Montana senior and Missoula native Colin Bingham added: “As a kid, I was pretty confident in my Grizzlies, so I would have told you that you were out of your mind. But it is the case. We’re doing everything in our power to get back there.”

The 2010 decade has been an unthinkable, unimaginable fall for Montana following the sustained success going back to when Don Read took over the program in 1986 up until Hauck left after the 2009 season.

The potential reasons why the Griz have struggled since then are plentiful. There’s everything from coaching instability, recruiting changes, the facilities arms race in the Big Sky, the growth of the conference, a football scandal that resulted in Pflugrad and O’Day being fired and a reduction in scholarships, and a sexual assault scandal highlighted on the national level.

The answer to define the decade of decline lies in some combination of those factors. But no measurement of how much each one affected the program is sure to satisfy everyone.

“Ten years ago, I don’t think we would have had any idea what was going to be in store for the program for the following 10 years,” O’Day said. “I don’t think there were any indications of that. I think everything looked like we were in great shape. But you can never take anything for granted.”

The loss of Bobby Hauck to UNLV was also a major domino, evidenced in part by how quickly he’s turned around the program since returning ahead of the 2018 season.

Looking back, Hauck knows it’s hard to make the title game. That’s why he said turning around the program — or aircraft carrier, as he likes to analogize — was expected to take time, although he’s admitted the success of this year’s team has the Griz a year ahead of schedule.

It’s a sentiment shared by former Grizzly Chase Reynolds, who played on the teams that made national title runs in 2008 and 2009. He was later selected in the NFL Draft.

“Even though we had a bunch of success in those years that I played, it’s not easy,” Reynolds said. “It takes a certain attitude and a certain leadership on the team to keep that momentum going. Winning games is hard but staying consistent is harder because you get lax. I think that’s one thing us a whole did really well.

With Hauck back at the helm, Montana appears headed in the right direction to try to make it back to that level of national competitiveness. After a 6-5 campaign in 2018 in which they were one yard away from the postseason, they went 9-3 and earned the No. 6 in the playoffs in Hauck’s second season since being hired by UM athletic director Kent Haslam.

Haslam’s decision to hire Hauck in December 2017 was met with some criticism outside the program because of off-the-field issues with players he recruited. But that decision has been a boon on the football field and the Grizzlies have performed well in the classroom.

“We are playing home football games in December. If we are doing that, it means we are heading in the right direction,” Haslam said. “Coach Hauck and his staff have done a great job getting us back to competing for conference and national championships while building a culture of accountability. No one has higher expectations for the football program than Bobby, and I certainly appreciate that about him.”

“I was very excited to see Bobby get hired back,” O’Day said. “I think he’s done an amazing job. I think he’s hired a great staff. He’s brought great discipline. He’s a competitor. He loves Montana football. He loves everything about the state. He just brings so many intangibles back. He is a winner. There’s no doubt about it. I just think that I probably would agree with Bobby that maybe they’re a little ahead of schedule.”

Pflugrad added: “I think Bobby’s a done tremendous job. That was the correct hire. That was a smart hire. He’s got an outstanding staff in place.

One question is can Hauck return Montana to the national stage, particularly the title game? Then it begs to be asked if the Griz can get back to the level where they’re playing in a national title game every other year on average.

North Dakota State has shown it’s certainly possible, winning seven of the past eight national titles and again being seeded No. 1 overall this year.

“I think it’s possible,” O’Day said. “We can look at what North Dakota State has done, which has been just an amazing run by the Bison over there. With all the things they’ve got going at Montana, I think they’ve got an incredible coaching staff, great facilities, great fan support. Those are all the things you have to have to have the program running at its top-notch level.”

First off, Montana has to be competitive in the Big Sky. The Griz showed they could be by going 6-2 this year, but they just missed out on their first league crown since 2009.

It’s no longer just Montana in the Big Sky. Eastern Washington won the title the year after Hauck left and has been a playoff regular. Weber State has risen up under Jay Hill. Jeff Choate has the Cats getting more competitive by the year. And there’s seemingly a surprise team every year that comes out of nowhere to be competitive.

“Back when I played, there were some tough teams,” Reynolds said. “But it seems like now everybody’s tough. It doesn’t matter where you go. It might have something to do with social media where you’re finding more people these days, it’s easier to find players from different states, different towns, different areas. There’s more talent in the Big Sky than there probably ever was, which makes it harder to be a dominant team.

“I think we still have an opportunity. Montana has a legacy of being what they are. It just takes that one year to get on that train and everybody buys it and it just snowballs from there. I think Bobby has what it takes to lead Montana back to what we were 10 years ago.”

Reynolds sees the change beginning to happen and feels recruiting is and will be a key factor.

“One thing Bobby did really well was recruiting local Montana guys that were not necessarily the most talented, but we worked hard together as a team,” he said. “All of us just packed our lunch pails every day when we went to practice. I remember practices were tougher than the games because of the guys you were going against.

“That’s one thing that we’re headed back to that, getting those solid Montana kids that can play in the wintertime, can play when it’s cold and know how to play four quarters. I think that’s the main thing is getting those guys.”

The mantra the program has rallied around since Hauck came back to Montana in December 2017 is "Return to Dominance," or RTD. He’s said his team is a year ahead of schedule because “we got more wins than I thought we’d get,” which he credited to “hard work.”

One step of RTD was accomplished by getting back to the playoffs after a three-year absence.

“We’re here,” Purdy said. “People say it’s a competitive bracket or a competitive conference. It is. People are getting good. I think we’re finally in the right place, and we’re excited. We got a good staff, a good team. Everything’s just working. We got a good community backing us up, too.”

Bingham senses the return coming. What remains to be seen is if it can be achieved and how long can any potential reign atop the FCS last.

“Even once you’re there, you can’t be complacent. I think the guys on the team have bought into the culture. I think we’re definitely on the way there.”