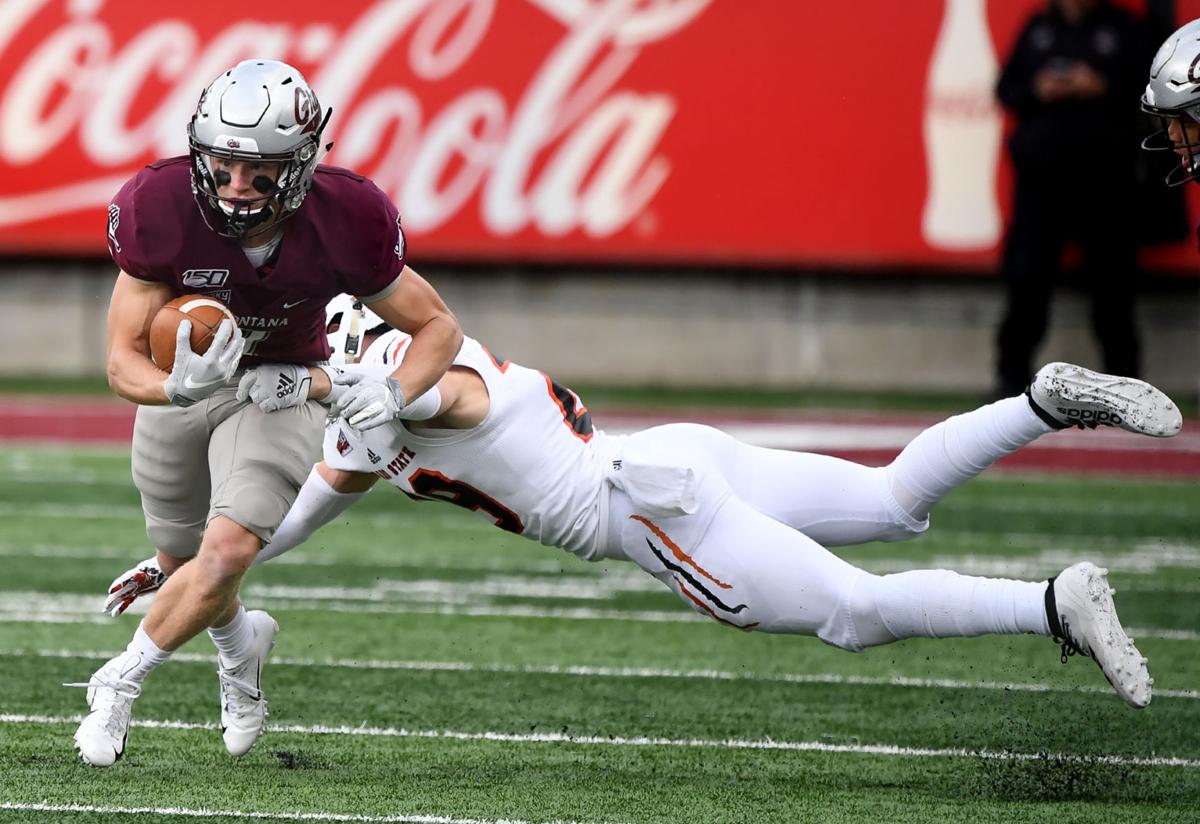 Montana wideout and Billings product Gabe Sulser (with ball) is among the many Grizzlies excited to be playing two real games in April inside Washington-Grizzly Stadium.

MISSOULA — The strangeness of our late-winter college sports scene hit me four weeks ago while covering a Montana basketball game.

An amusing message was sent out via Twitter by longtime radio voice of Southern Illinois athletics, Mike Reis. He was giddy over what he coined one of the greatest football wins by Southern Illinois — a program I knew well back in the 90s while working as beat writer — in the history of the program.

Southern Illinois steamrolled then-top-ranked North Dakota State, 38-14, in a game that defied everything we've come to know about the Bison. Still, for anyone to label it a great win in February seemed a little silly. It's like calling a September hockey win epic. It's all out of whack.

Yet here we are in Montana, less than two weeks away from watching the Griz football team play a real game at Washington-Grizzly Stadium. That seems out of whack too, but exciting nonetheless.

First up is a contest against NCAA Division II Central Washington on April 10, then a battle against FCS Portland State the following week. A limited number of fans will be admitted and the games count toward Bobby Hauck's coaching record, so you know he's going to break out his game face.

April games may not seem like much for those of us that associate big Griz wins with Halloween or Thanksgiving. Plus there's nothing to be gained by going 2-0 when it comes to the FCS playoffs. But don't tell the players the games are trivial.

"It makes it super exciting," said Griz wideout Gabe Sulser, a junior from Billings. "That’s what you play for. I know myself and the rest of the team and our coaches are really excited to get back out and play.

"It gives us a little something extra fun to look forward to more than your typical spring just playing each other. We’re thankful for the opportunities."

His coaches might go on and on about how spring drills are important whether the Griz are playing real games or not. But really, anyone that's played any sport beyond middle school knows there's no comparison.

Two teams are coming to Missoula next month with the intention of beating Montana's fanny. That's strangely intriguing, even for the casual fan.

"We’ve all been going through the same things. We’ve all been just working and keeping our head down, so we’re all excited to go out there and play some games," Akem said. "I think one of the best things is the camaraderie and excitement."

​​It's going to be interesting to see how Hauck doles out time at quarterback. Will he split time between heir apparent Cam Humphrey and several others or will he use the games to help Humphrey become razor sharp?

The last time the Griz walked off the field after a game, it was a cold night in Ogden, Utah, and the occasion was an FCS playoff quarterfinal game against Weber State. Dalton Sneed was the quarterback for UM and things might have turned out differently had he delivered a typical performance.

No one knows for certain whether Montana has improved or digressed since then. If you take stock in what Hauck has been saying during spring drills, the Griz are a beefed-up bunch capable of making another memorable playoff run in late 2021.

We'll get a genuine sneak-preview of their potential on April 17 when Big Sky Conference foe Portland State rolls into town. Then 20 years from now we can all tell the kids in town about the epic college football game we saw in Missoula 13 days after Easter.

You might want to save a copy of the sports section to prove it.

As Montana begins spring football camp this weekend, here are 11 questions about the Grizzlies that will have to be answered.