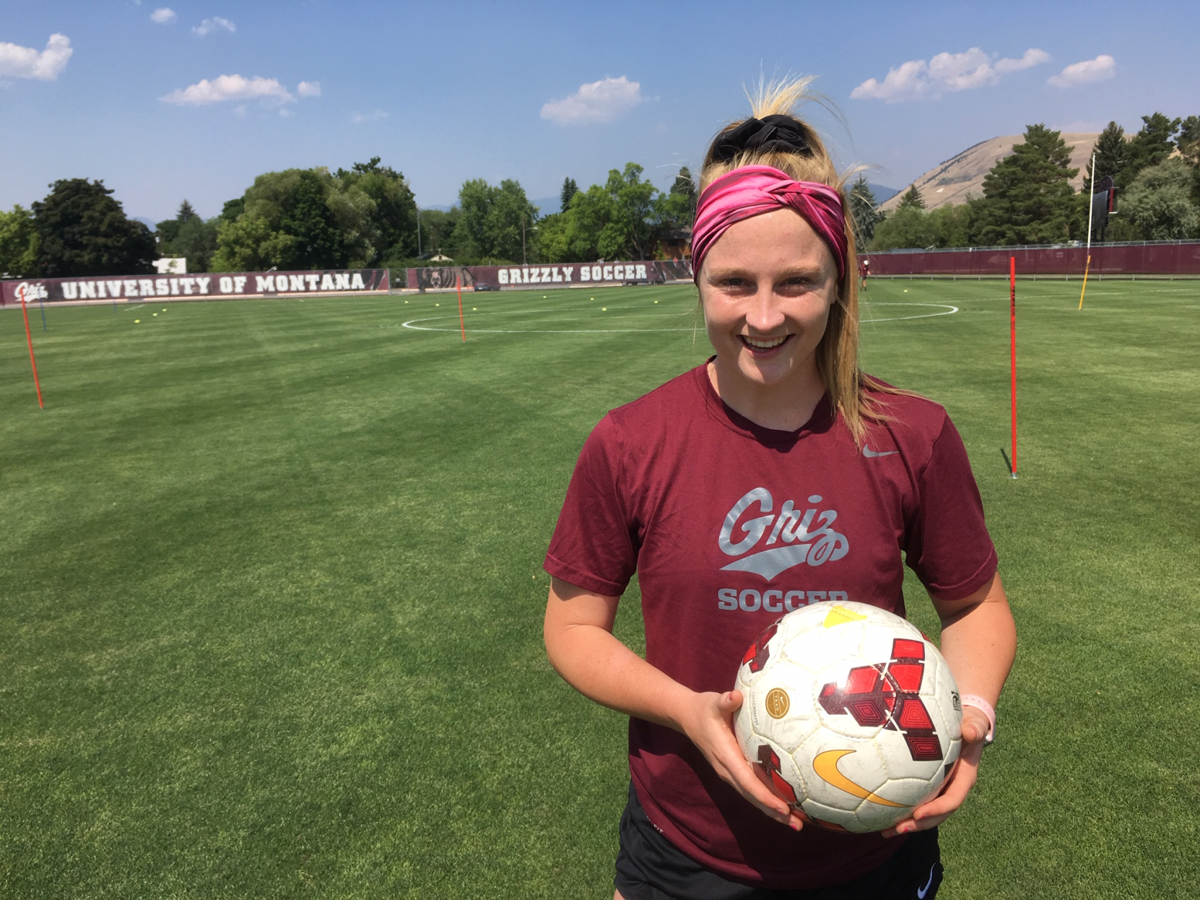 MISSOULA — She's one of the toughest female Grizzlies of them all.

The rock on which her Montana soccer team relied to reach the NCAA Tournament last fall. The goalkeeper that posted three straight shutouts in the Big Sky Conference tournament last November.

Claire Howard is currently on pace to break the most significant goalkeeper records at Montana, including shutouts. And on Wednesday her team will begin its 2019 odyssey when it hosts Mount Royal University in an exhibition match at 11 a.m. at South Campus Stadium.

Moms and dads, if you're looking for a way to inspire your future fútbol player, you need to see the way this junior captain directs her defenders and takes on all comers.

"That's something I've never struggled with, needing to be tough," Howard said ahead of her team's first practice last Wednesday. "It was a natural fit for me to be that lone one back there."

But why would anyone in their right mind ever want to take a sharp soccer shot to the face? Or confront a charging speedster in cleats?

I mean really, goalkeepers are like offensive linemen in football. They rarely receive due credit when their team wins and often shoulder too much blame when it loses.

"It's something I love," she insists. "I thrive off the pressure and love knowing that people have to beat me to score. It gets me excited about goalkeeping."

Howard will tell you one the best parts of her position is playing for Montana. She grew up in California, where her father used to challenge her by whipping the soccer ball into the pool so she could practice making diving saves.

Now she's making those same diving saves at a place where she's appreciated by a lot of people.

"The support from the community and how nice and genuine everybody is, that's made me feel more at home here," she said. "We're the only Division I soccer program in Montana and in California you can drive 10 minutes almost any way and find them. It's cool to go back to Santa Rosa and share my experiences here."

Reaching the NCAA tourney in soccer doesn't stir the same sort of Missoula buzz as reaching the Big Dance in men's basketball. On top of that, the Grizzly kickers played their NCAA game in 30-degree weather on Nov. 9 at Washington State.

Still, over 750 people turned out to watch that match and a good number were wearing maroon instead of Wazzu red. The Cougars won, 5-1, but the Grizzlies continue to ride the high of reaching the NCAA tourney.

"It was huge for us, our first time being there in (seven years)," Howard said. "Initially I think we'll have a bigger fan base this year because they want to see what we're about. And having a girl from Missoula (freshman midfielder Quinn Peacock) will help generate more fans.

"They've been so great already. But just seeing our culture change and winning more games, there will be a lot more fans. We can be just as good or better. We're hungry to do it again and we know what it takes."

What an exciting notion. Howard will keep the Grizzlies organized on defense and together with junior Alexa Coyle, a dynamic scorer and the sister of former Griz linebacker Brock Coyle, Montana has reason to believe it can make another memorable late-season run.

The Grizzlies won't be the favorite to win the Big Sky, in part because there are no seniors on the roster. But they captured lightning in a bottle as the No. 5 seed at the league tourney last year, so they've already proven anything is possible.

This is going to be fun.