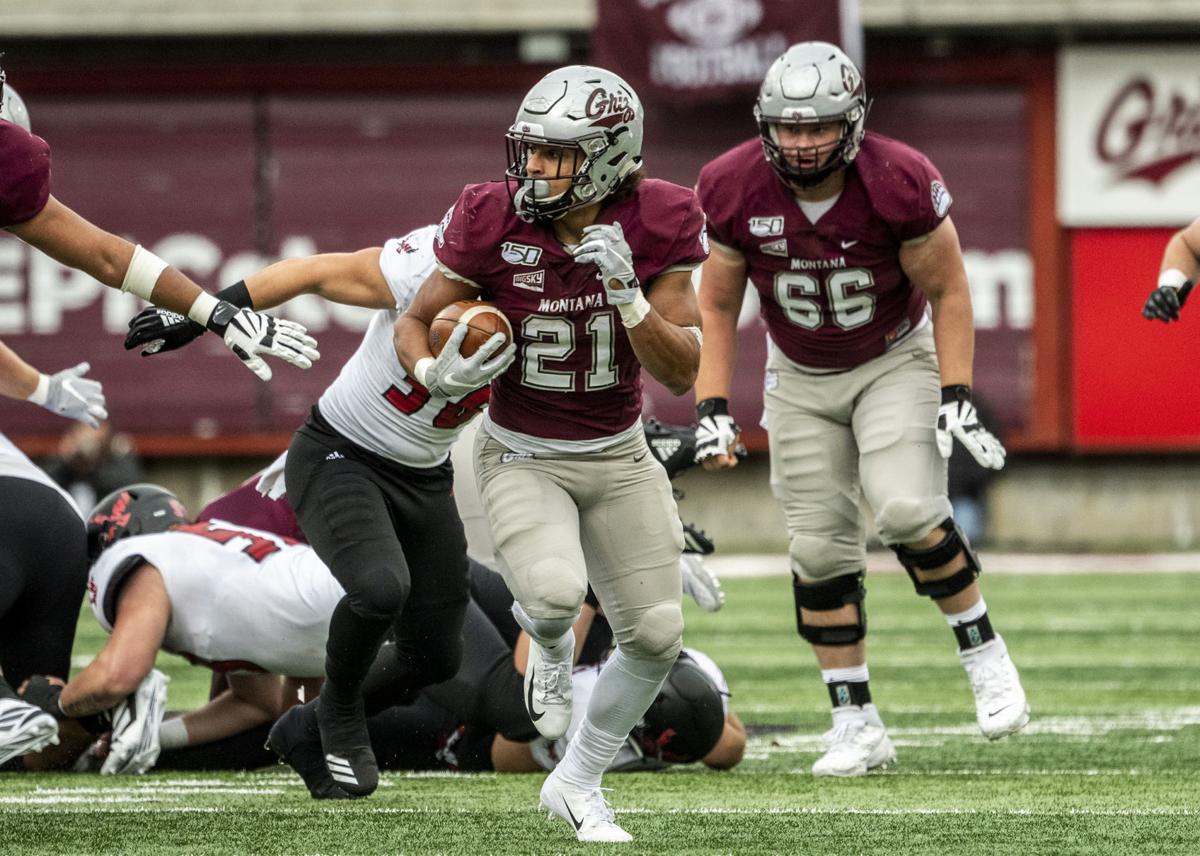 Montana's Marcus Knight (21) runs the ball against Eastern Washington at Washington-Grizzly Stadium. Saturday will be remembered as the day Knight took the reins for the Grizzlies, piling up a career-high 26 carries for 131 yards and three touchdowns in a 34-17 win.

MISSOULA — Say this much for the Montana Grizzlies: They have the heart of a champion.

They still don't have the concentration level of a Big Sky Conference football champ, dropping a handful of passes in the first half Saturday. Plus there's reason to question whether they have the personnel with standout senior quarterback Dalton Sneed sidelined by an ankle injury.

But you have to hand it to the coaching staff for coming up with a sound game plan that didn't rely too heavily on back-up quarterback Cam Humphrey's passing. Humphrey needs to work on his accuracy and there were times Saturday when he threw the ball like Max Scherzer to receivers 10 yards away, but he showed there's nothing wrong with his mobility or desire in a 34-17 win over Eastern Washington.

The outcome was critical for the Grizzlies in their struggle to stay among the Big Sky elite. Now there are just three teams with one loss or fewer in league play, including Sacramento State, Weber State and Montana.

Saturday's snowy, windy saga at Washington-Grizzly Stadium will be remembered as the afternoon that running back Marcus Knight stole the spotlight. He's only a sophomore and he hails from California, but you'd never guess by the way he totes the rock in bone-chilling conditions, piling up a career-high 26 carries for 131 yards and three touchdowns.

Knight's big day kept the ball away from the Eagles, who led the Big Sky in total offense coming into Saturday's game. Montana still gives up too many yards via the pass, but Eastern Washington's point total was its lowest since an Aug. 31 loss against the Washington Huskies in Seattle.

My favorite play Saturday probably doesn't jibe with yours. Most of you probably didn't even notice.

I'm giving my game ball — not that I have one — to the Pride of Butte, sophomore offensive tackle Dylan Cook. It was his block that sprang Knight for a game-tying 45-yard touchdown run midway through the third quarter. It started Montana on a run of 24 straight points that buried the Eagles.

The key now for the Grizzlies and Griz Nation is to keep this win in perspective. Saturday's version of the Eagles is not the same as last season's when they reached the FCS title game in Frisco, Texas.

Eastern QB Eric Barriere is not the same as he was in 2018 when he burned UC Davis for 84 rushing yards in a playoff win. Barriere wears a brace on his left knee and rarely runs the football because he's banged up.

Montana's biggest games are ahead. Four biggies in a row, to be exact.

It starts with next Saturday's afternoon showdown at Portland State. Then comes a border war with visiting Idaho before formidable Weber State comes to town and then the Brawl of the Wild arrives on Nov. 23 in Bozeman.

Walking back to the office after the win over Eastern Washington, I couldn't decide whether the Grizzlies won the second half or the Eagles gave up. Probably a combination of both as the Eagles failed to score a point in the final 24 minutes.

But that speaks to character. Montana has a lot of it right now — along with an impressive level of persistence. Eastern Washington is lacking in both and it shows.

Adversity and cold weather have a way of messing with a man's mind. The Grizzlies are conquering both right now and that bodes well for November.

The No. 10 Grizzlies earned the 600th win in program history by defeating Eastern Washington for the first time since 2015.