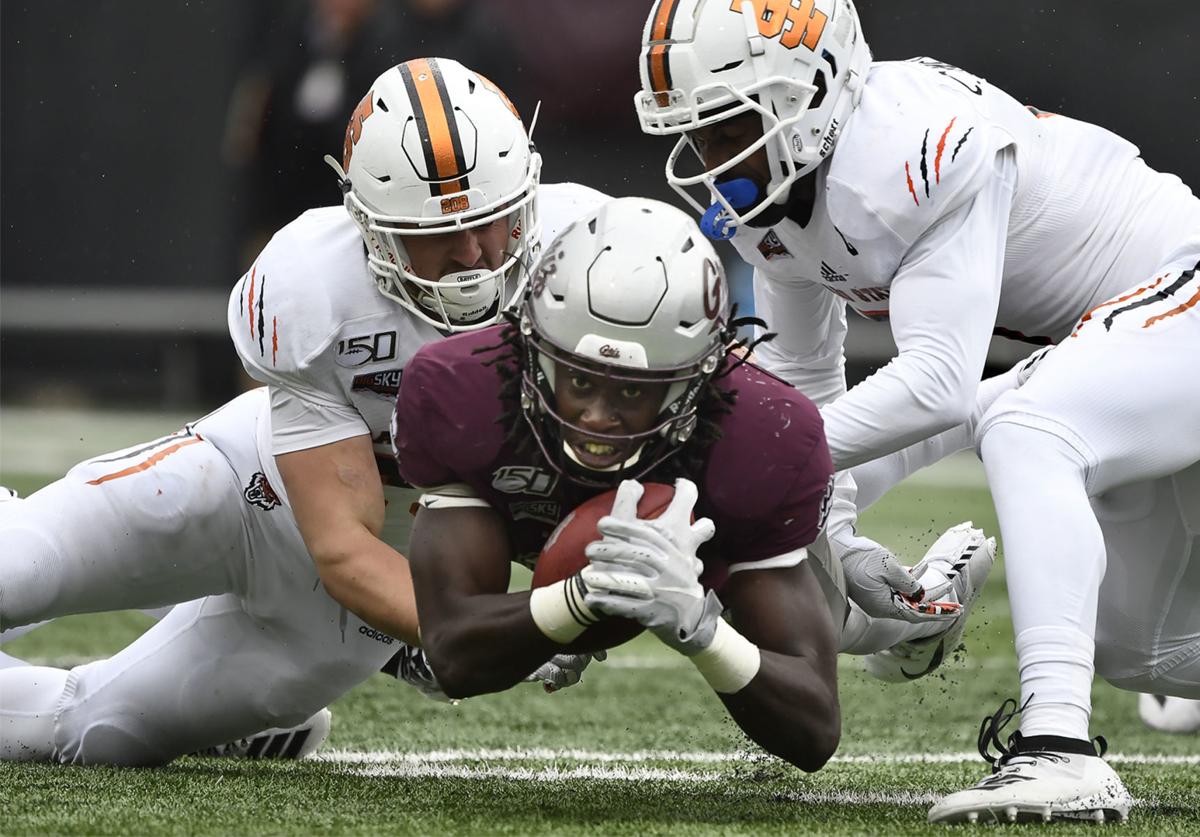 Montana's Samuel Akem works for yardage as two Idaho State players look to make a tackle in the second half. The Grizzlies roared back from a 17-point deficit to beat the Bengals.

MISSOULA — Into each life a little rain will conspire to draw one's ire.

It's not so much the misery as it is the reaction that matters most. Some guys get smacked in the face and it makes them mad-dog crazy. Other slink into a corner and hide their eyes until it's over.

So it was that the eighth-ranked Montana football team suffered a serious dent in the forehead against upset-minded Idaho State in the first quarter Saturday. Between the cold rain and the 17-0 deficit, a near-capacity crowd at Washington-Grizzly Stadium was left feeling stunned and glum.

Even good college teams get caught moping when they start so poorly. Take UC Davis, for example, and its display of laying down after Montana raced to a 17-point lead last weekend.

The Grizzlies showed they're different in Saturday's 59-20 comeback win. Showed that underneath those fancy Maroon & Silver threads lie hearts the size of a Mountain Line bus.

Montana's 24-point turnaround in the second quarter was simply magnificent. The offense, the defense, the coaching adjustments ... there seems to be no quit in these Grizzlies.

Senior quarterback Dalton Sneed, who showed a hitch in his giddy-up at times throughout the afternoon, bounced back from a 3-for-8 passing start to complete 12 of 19 tosses in the second quarter, complementing his 54 rushing yards. The same Montana defense that surrendered 17 points in the first 16 minutes and looked like a wall of Jell-O suddenly switched on and limited the Bengals to three points the rest of the day.

Meanwhile, the Bengals turned back into the Bungles that we Missoulians all know and love in the second quarter. They possessed the ball less than six minutes and were 0-for-3 on third-down conversion tries. They were flagged five times for 66 yards and seemed to lose some composure with personal foul infractions.

"You give up the penalties, that gives them hope and a chance and gives them 15 yards at a time," ISU coach Rob Phenicie said. "... That’s one thing that kind of stood out in that second quarter."

Kudos to Phenicie and the Idaho State coaching staff for coming up with a good game plan. King-sized kudos to Montana coach Bobby Hauck and his staff for adjusting on the fly and somehow managing to emerge with a 24-17 halftime lead.

Have you noticed anything different about Hauck in his second go-round? He used to act more like John Madden on the sideline when his team went south or one of his players botched something badly. Now he's more like Bud Grant, showing very little emotion Saturday even when his team appeared to be playing without its prescription glasses.

Whatever it is, it's working. And all those naysayers that scoffed at Montana Athletic Director Kent Haslam's decision to bring back Bobby are looking mighty silly with egg all over their face. Put that in your pipe and smoke it, all skeptics.

The sizzle has returned to Griz football. It's been 10 long years since Montana won its first five games against FCS-level foes. Coincidentally, that was Hauck's final year in his first go-round in the Garden City.

For my money, the most memorable play from Saturday was a near-miss by Montana. It embodied the team's grit.

The Griz dialed up a trick pass play in which Sneed was the targeted receiver in the third quarter. Sneed sprinted down the right side of the field while two defenders conspired to make him into a Grizzly sandwich as he laid out to catch the ball.

Sneed couldn't quite hang on as he slammed into the turf. But it was one helluva brave effort, and he responded by throwing a 25-yard TD pass to Samuel Akem on the next play.

Coincidentally, Montana's character-exposing day came together with an extra special guest in the stadium for homecoming. A Treasure-Stater who set the bar for magic the last time Montana reached the FCS championship in 2009.

I hope you enjoyed it as much as we did, Marc Mariani.