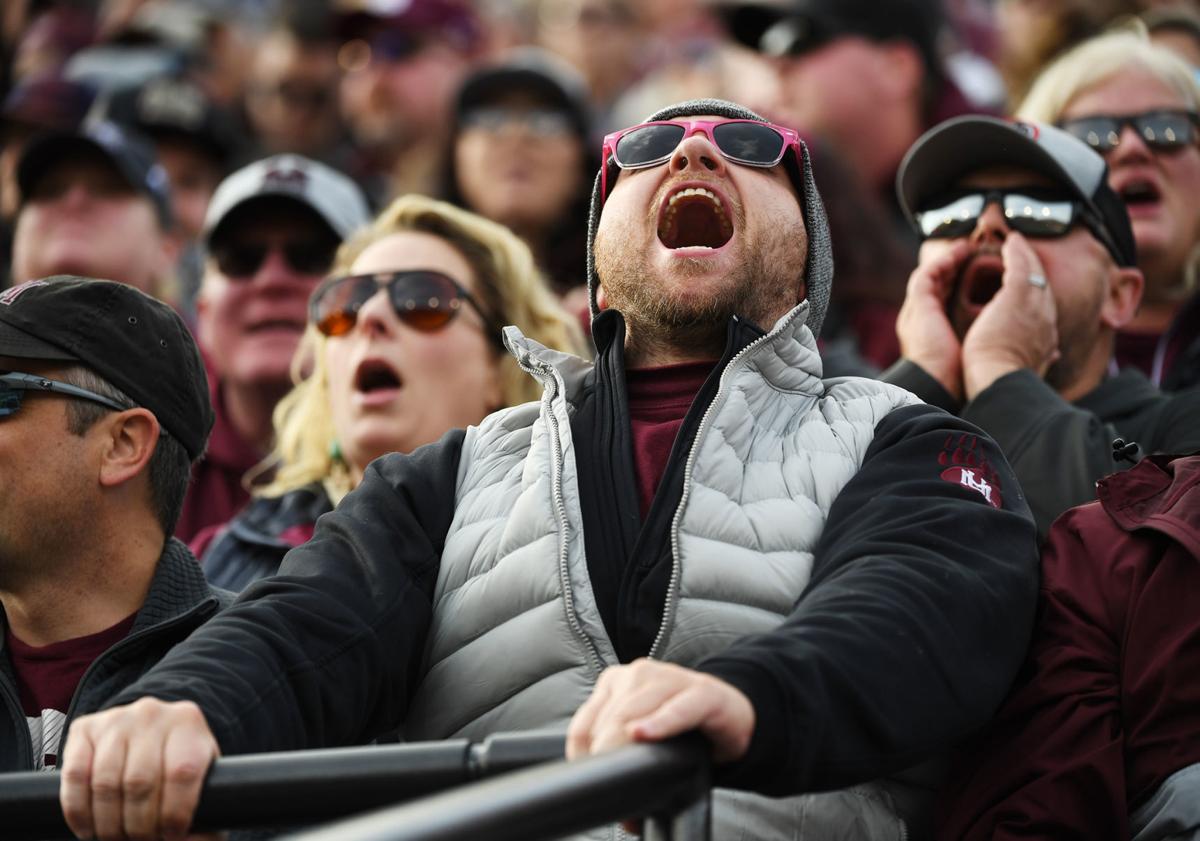 A Montana fan cheers in the first half of Saturday's game. The fifth-ranked Griz football team steamrolled over third-ranked Weber State in a game that wasn't even as close as the 35-16 final score.

MISSOULA — With jaw and fist clenched, coach Bobby Hauck leaped in celebration of a blocked punt early in Saturday's game.

Garrett Graves, from tiny Eureka, Montana, did the deed. Hauck's fifth-ranked Grizzlies parlayed the play into a touchdown and they were off to the races, posting a surprisingly-lopsided 35-16 win over third-ranked Weber State at Washington-Grizzly Stadium.

Hauck has spoiled Montana fans in the past and now he's doing it again. But don't for a moment underestimate what the 2019 success of his program means to the University of Montana and Missoula.

Maybe, just maybe, the football team can do what the UM administration hasn't by boosting enrollment numbers significantly. Sound a little far-fetched? Then go ahead and Google "Flutie Effect" on your iPhone.

You'll discover how Heisman Trophy winner Doug Flutie and his football team bolstered Boston College following their fairy tale 1984 season. Enrollment rose 30 percent in the years after that magical season, which included a stunning win over the Miami Hurricanes.

By Monday afternoon, the Montana football team will have jumped to No. 3 in the nation. If the Grizzlies come through with a win at Montana State Saturday, they'll surely receive a first-round bye in the playoffs and then the hometown fans will be treated to a pre-Christmas treat with a second-round matchup in Missoula on Dec. 7.

The manner in which the Grizzlies dominated the Wildcats physically is what stands out for this sports columnist.

The Bitterroot Bruiser, Stevensville native Jesse Sims, the hard-hitting safety from little Bigfork, Josh Sandry — those guys know how to make an impression. Same goes for the freshman running back from Portland, tough-as-nails Nick Ostmo, and the coach's son, Robby Hauck, and his defensive teammate, Gavin Robertson, who set the tone with a vicious first-quarter hit.

Talk all you want about keeping the game safe, but never forget intimidation is a part of NCAA Division I college football. Weber State receiver Ty MacPherson looked intimidated when he dropped a pass early in the second quarter, and it's not surprising the way the Griz defense was attacking.

"We got our butts kicked today. I think that was obvious to everyone," Weber State coach Jay Hill said. "... Hopefully we can get our butts back up to this stadium, Montana plays great throughout, we play great throughout and we get another matchup here in a couple weeks, I hope."​

With a win next Saturday, Montana will clinch at least a share of its first conference title in 10 years. The last time the Grizzlies won the league in 2009, Hauck led them to the national championship game.

This sports writer never doubted Bobby would guide the Grizzlies back to national prominence. He just never expected the skipper from Big Timber to turn things around so soon.