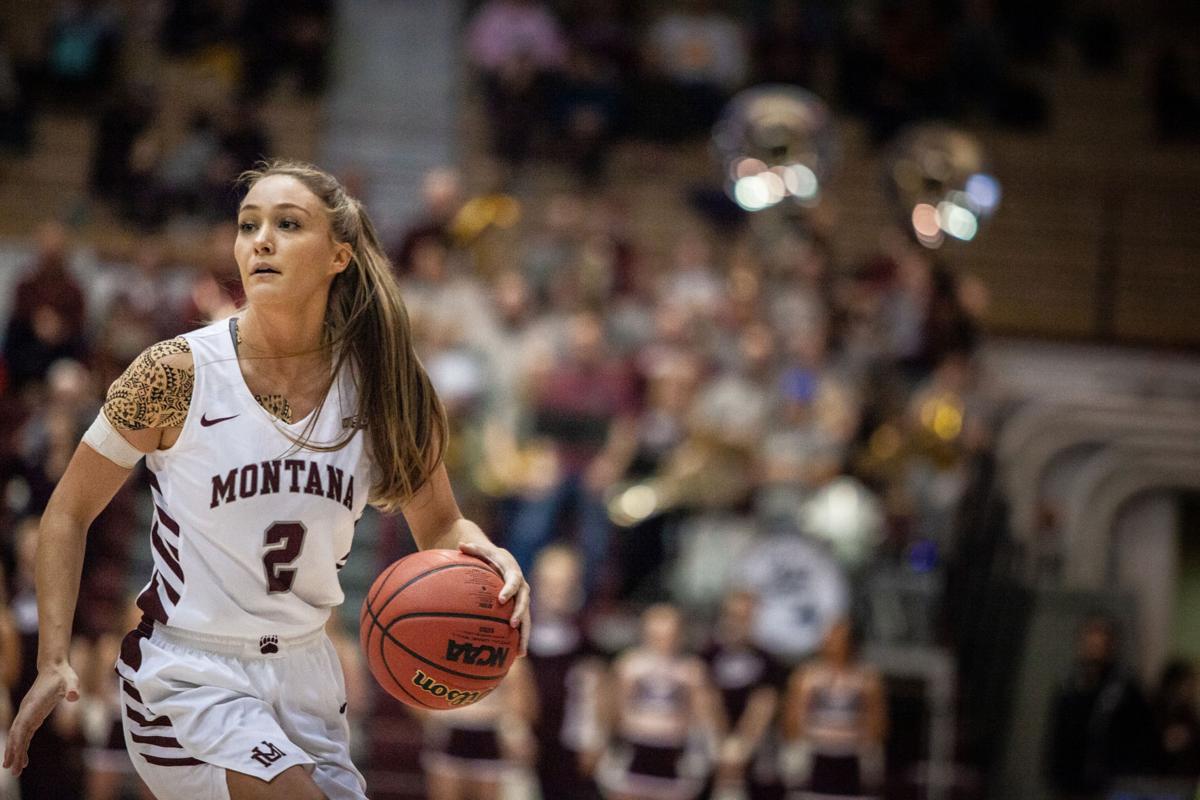 Guard Sophia Stiles will be a leader for the new-look Montana women's basketball team this coming season. Unfortunately, that season won't start for at least six weeks.

MISSOULA — If this were a typical autumn in Missoula, Montana women's basketball fans would be grabbing their maroon gear out of the closet, anxiously preparing for Tuesday's maroon-silver scrimmage.

There is no scrimmage this year. Nor is there an exhibition game later in the week like last year or a season opener on Nov. 5 like last fall.

Heck, the Lady Griz don't really have anything scheduled before their Big Sky Conference home opener on Dec. 3 against Southern Utah. They aren't allowed to play anyone until Nov. 25, so even if they do come up with a non-conference game, it will be 5½ more weeks of dribbling in an empty gym.

Interim head coach Mike Petrino has tried to look upon the extra practice time as a bonus. He's blending eight newcomers with seven returning players, figuring out how to replace 70 percent of his scoring and 63 percent of his playing minutes from last year's 17-13 team.

Lots of time for feisty scrimmages with 15 hungry players, right? Well, sort of.

"You have your days when you have your full roster and days when players are missing related to COVID-19 protocol," said Petrino, who held his first official practice Thursday but had time with the group prior to that date. "We still have only had a few practices with full 5-on-5 (scrimmaging) due to healing up from injuries or COVID protocol. We are battling that."

Petrino has to hit the ground running this winter. He needs to prove he's a winner so that athletic director Kent Haslam removes the interim tag from his job title. It makes for a whole lot of intrigue if you're a Lady Griz fan.

"We're not focusing on what we don't have, we're focusing on what's in front of us," he said. "Honestly the best part of our day right now is those two hours when we're in the gym practicing. All the stress of 2020 is gone for a while. Then when practice is over, it's out there waiting for us."

Give Petrino credit. He jumped into the fire with both feet back in April when he landed a transfer from Missouri and he's shown that he has a little Frank Sinatra in him, doing things his way.

"It's crazy," he confided. "My mentors, they're telling me that I cannot believe a first-year head coach, dealing with COVID, dealing with a recruiting dead period, all these issues ... It's definitely a challenge every day."

We can talk ad nauseam about the Xs and O's of Lady Griz hoops. Maybe lament the fact the team hasn't placed higher than fourth in the Big Sky Conference or won the league — that's the expectation here — in five years.

But for championships to happen, for goodness sake the team first needs to have more reliable shooters. That's the part that frustrates the heck out of the fans: Too many "bricks," as former play-by-play announcer Tom Stage used to say.

So what about that, Coach Petrino? Can this team shoot the rock?

"We're definitely seeing improvement," he offered. "It's fun to measure the growth and show it to them over time.

"There's a graphic we share with our kids that talks about competing every day in practice. There's opportunity there. We have so many holes to fill from last year's team that opportunity is there for everybody. That elevates the competitiveness."

As UM finished up its first week of official practices, one thing is clear: It will be an interesting season of college basketball.