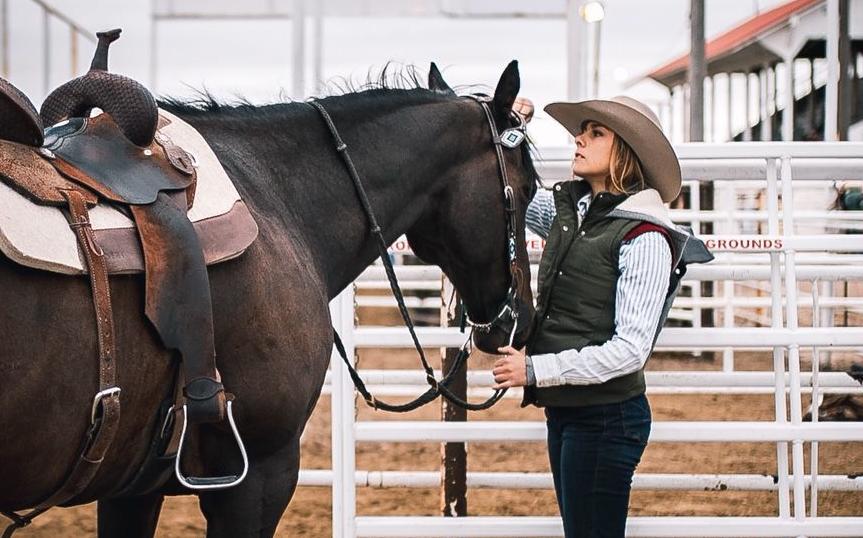 MISSOULA — Next time someone tells you there are no national champions at the University of Montana, tell them about Ashtyn and Stick.

Ashtyn Carlson arrived in Missoula this past summer, determined to make her mark as a Grizzly at the College National Finals Rodeo (CNFR). She has already made headlines, winning a CNFR title in barrel racing aboard Stick while attending the College of Southern Idaho last spring.

With all the traditionally-tough rodeo schools out there, Carlson picked Montana. She loves working with the Grizzlies' mild-mannered, NFR-qualifying rodeo mentor Kory Mytty. She also loves the mountains and her teammates.

But what really touches your heart is the nine-year bond Carlson has developed with her horse. In a sport that fields its share of criticism for the treatment of animals, Ashtyn and Stick embody everything that's good about rodeo.

"When people get a good (barrel) horse, they usually just run it until it's too sore to run again," the junior said. "I treat my horse like royalty. If he needed me to massage him before every run for an hour, I think I would do it."

For those out of the know about rodeo — count me in that group — Carlson's relationship with her horse is not easily understood. It's like the bond you have with your dog combined with the bond you had with your first car.

"I've figured out his quirks and I know how he runs," Carlson offered. "If anyone else was to try to jump on him and run him, they wouldn't do as well because they don't know how his mind works. Horses have the biggest personalities. They really do."

So do cowgirls. Carlson, 20, packs a whole lot of charm, toughness and determination in her petite frame. The Colorado native has hit her legs on barrels so many times that she has bone chips floating around in both knees.

That didn't stop her from winning three barrel racing events for the Grizzlies this fall. On top of that, she's fared well in the other women's rodeo events.

She's determined to bring a CNFR buckle back to Missoula this spring by repeating as barrel racing champion. But that's just the half of it.

"My ultimate goal is to win the all-around title at the CNFR," said Ashtyn, who has broken 14 seconds in barrel racing. "To do that I would probably have to win barrel racing, or finish top three, and probably place in one or two rounds of a secondary event."

That's where Mytty comes in. It's hard to improve on what Carlson has accomplished as a barrel racer, but she's still learning when it comes to other women's events like team roping, breakaway and goat tying.

"For roping he tells me, 'You're not getting a good start on your calf,' and 'You need to trust your horse,' and stuff like that," said Carlson, a business major who hopes to someday win a WNFR title and work full-time with horses. "He's good at pinpointing details.

"I would love to represent Montana winning a buckle because Kory is a phenomenal coach and I think he deserves some recognition on his coaching. He's one of the best coaches I've ever met."

Whether she gets it done next June in the CNFR or not, it's safe to say Ashtyn has already endeared herself to Griz Nation. It's just a pity she doesn't get 25,000 to watch her feats like the football team.