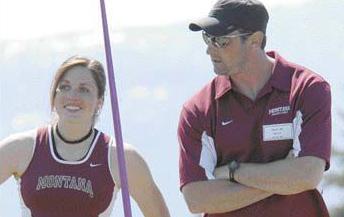 Montana track and field coach Brian Schweyen (right) works with one of his athletes in this file photo from several years ago.

MISSOULA — With uncertainty running rampant this weekend, it doesn't make much sense to get riled up about sports.

Seriously folks, how about you use that pent-up energy to go visit loved ones? Maybe call grandma and ask if she needs her lawn cleared of debris after that wicked wind storm Friday night?

Or maybe you'd rather not take my advice. Maybe you'd prefer words of wisdom from a veteran University of Montana coach whose spring season lay in shambles.

"Take that passion and love you have for sports and let's put it into tomorrow when you wake up to the first day of the rest of your life," Grizzly men's and women's track and field skipper Brian Schweyen said.

"Athletics teach you how to go out and build the success you choose for yourself. That's the main thing we need to convey here. We still have that opportunity. Let's not forget it."

As tough as this past week has been for Montana high school and college basketball players, at least they had a season. Most teams had full seasons. A few high school teams had one game left. The Grizzly men might have had three or four left if they got their act together.

Regardless, don't go telling me it's devastating you didn't get to play your final game. That's just vanity talking.

Getting your game canceled is disappointing. Watching your best friend die of brain cancer is devastating. Take my word for it.

If you're going to feel real bad for any of our area athletes, feel bad for those who work all year to get ready for spring sports. They might not even get a chance in 2020.

Imagine being a member of Schweyen's Grizzly team. You've been practicing out in the cold, or in a gym, for several weeks getting ready for an outdoor season. Then you find out you won't have a meet for at least another month because the Big Sky Conference has suspended competitions until April 15.

Then it gets worse.

"Then the NCAA has passed down a dead period for recruiting and everything. We can't do anything. There's really at this point no direction in knowing where to go."

Missoula high school athletes are also in a state of limbo. We know for sure that Hellgate, Big Sky and Sentinel won't be having any softball, track or tennis until at least May. It's hard to know what will happen after that, with state meets slated for May 21-22.

As of today, a lot of smaller schools haven't officially called off spring meets. I talked to Corvallis veteran track coach Spencer Huls and he told me the Gene Hughes Invitational is still on for next Saturday. Ditto for Polson tennis coach Bob Hislop and the home meet he has scheduled for Friday.

All that could change in a heartbeat. But for now, I can honestly say I've never been more excited about the prospects of covering a high school event in Montana's March weather. I'm a cub reporter all over again.

Schweyen is excited about getting out there to watch some prep athletics as well. It's just that he's not as optimistic as this columnist that events will be held.

"We have a lot of (potential recruits) out there we were going to wait and see what they did this spring," the coach said. "That probably isn't going to happen. So we'll have to go off our instincts and still find the athletes we want and move forward, building a program for next year."

Ah, wait 'til next year. What a beautiful sentiment.

It's not just for Cubs fans anymore.

MISSOULA — The University of Montana announced on Monday that the Grizzlies' spring football game would be canceled due to coronavirus concerns.