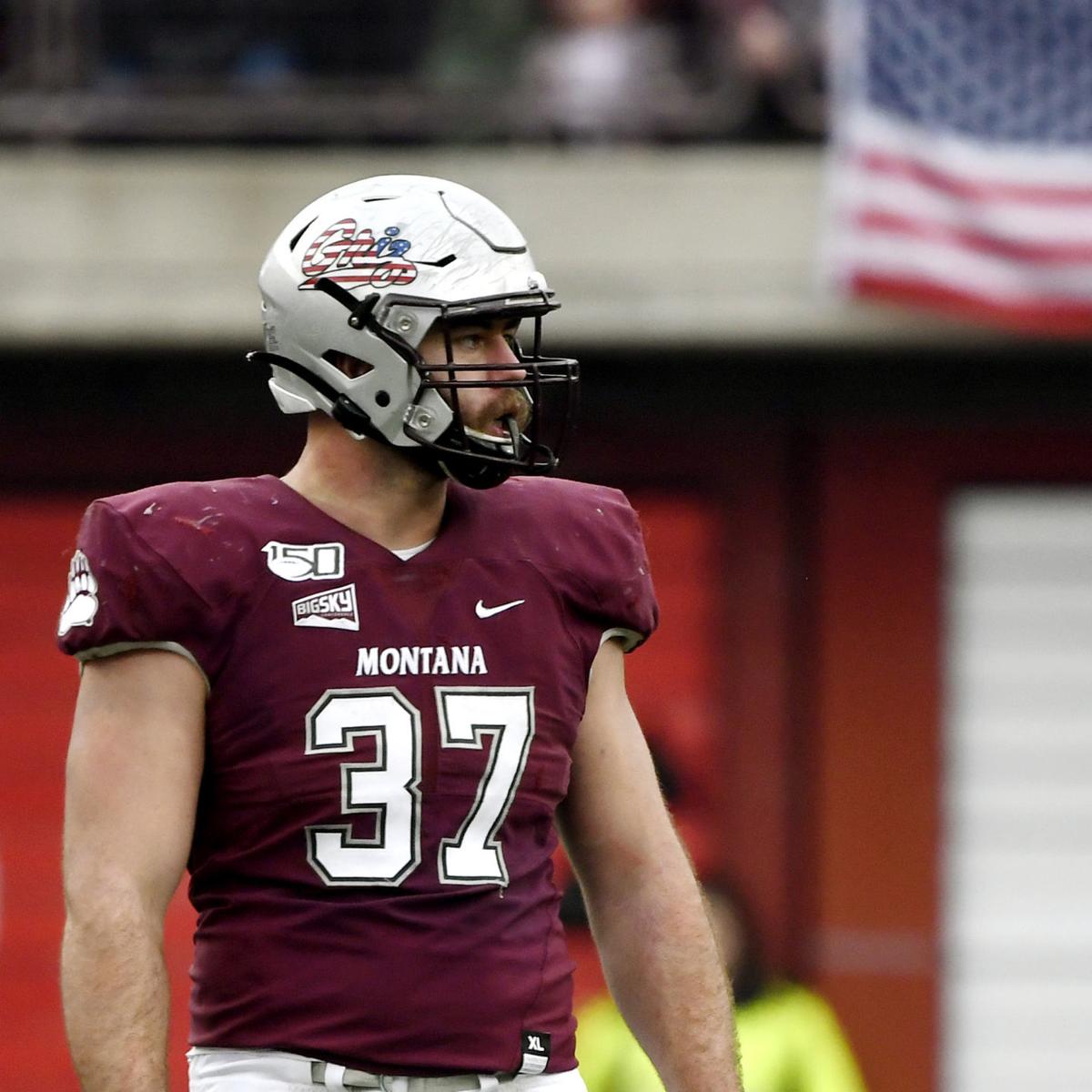 Montana senior nose tackle Jesse Sims looks to the sideline during the Grizzlies' 42-17 win over Idaho on Nov. 9, 2019, in Missoula. 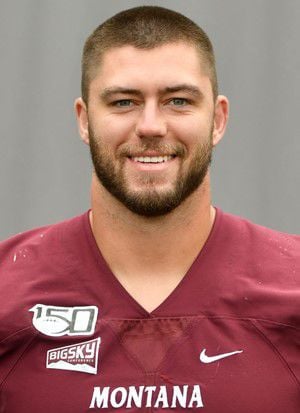 Montana senior nose tackle Jesse Sims looks to the sideline during the Grizzlies' 42-17 win over Idaho on Nov. 9, 2019, in Missoula.

MISSOULA — Jesse Sims’ favorite moment at Montana isn’t blowing up an offensive lineman, crushing a quarterback or jumping on a fumble.

The senior defensive lineman fondly recalls sitting in the stands with fellow redshirt players at Washington-Grizzly Stadium in 2015 when Montana shocked No. 1 North Dakota State with a touchdown on the final play of the season opener.

Over four years later, Sims’ career is winding down at Montana but the team-first attitude persists. He’s gone from Oregon State commit to Montana signee, from one Griz head coach to another, from defensive end to nose tackle and maybe most memorably from jersey No. 49 to No. 37, the legacy number that’s cemented in Montana tradition.

“It’s been a big honor,” Sims said of wearing the No. 37 jersey prior to his 37th career start when No. 5 Montana hosts No. 3 Weber State at 1 p.m. Saturday in Washington-Grizzly Stadium.

“There’s been a lot of great guys that have worn it before me — not just good football players but great guys that represent the university off the field, too. I’m just really proud to be a part of the tradition.”

Montana coach Bobby Hauck knows quite a bit about the legacy of the No. 37 jersey and what it’s supposed to represent. He was there when Kraig Paulson started the tradition by passing the number along to Tim Hauck, Bobby’s younger brother, ahead of the 1987 season.

Sims is the lone player who’s worn the revered jersey since Hauck returned to lead the program in December 2017. Hauck feels Sims has worn the jersey well, embodying the key qualities of what a Grizzly football player is supposed to be, working hard with an unselfish attitude and physical approach on the field.

“Jesse’s a good, tough Montana guy who’s produced for the team,” Hauck said. “I think he’s done an outstanding job with that duty.”

Sims grew up in Stevensville, about 40 minutes south of Missoula, strapping up the football helmet beginning in third grade by playing for his dad. He also played basketball in the winter, competed in track and field in the spring and was hoping to pursue basketball long term before his growth spurts stopped.

Sims changed his focus to football his sophomore year of high school, broke out on the football field the summer before his senior season at Corvallis, where he’d be an all-state running back. He drew offers or interest from FBS teams, committed to play at Oregon State but decommitted when head coach Mike Riley left for Nebraska.

Fortunately, for Montana, the Griz were still interested in Sims, and he had reciprocal feelings.

“I just feel super lucky that I got the chance to come play here and have a lot of people from my hometown that are just down the road supporting me,” Sims said. “The things you learn and the relationships that you build here, it’s being a part of not just this team but this community that rallies around their Griz athletes so much that has been a really cool experience.”

The difference for Sims at Montana compared to Oregon State was he’d be playing defensive end instead of tight end. He didn’t let the fact that he was playing at the FCS level instead of the FBS keep him down.

Sims started to show why he was an FBS recruit and earned respect from his teammates for his practice habits and play on the field. After two years, he was asked by Tucker Schye following the 2017 season to be the next in-state, defensive player to wear the hallowed No. 37 jersey.

Sims knew the significance of and history behind 37, growing up as a Griz fan and attending games. He’s the first Grizzly from the Bitterroot Valley to don the number, and he’s tried to live up to the hard work, team dedication and tough play the jersey recipient in supposed to have.

“He’s what you would think of a Montana football player,” Montana linebacker Dante Olson said. “Just a blue-collar, hard-nosed, doesn’t say much, but he’s going to hit you in the mouth. I love watching how he works. He’s got one of the best work ethics I’ve ever been around. All the recognition he gets is definitely well deserved.”

Sims garnered more respect from his teammates after his junior season and was chosen as one of three team captains for 2019.

“He’s not a guy that’s going to talk anything to death, but I think he’s a good leader on the football team,” Hauck said. “That’s why they elected him a captain.”

Fellow defensive lineman Braydon Deming said Sims can lighten up a room by making funny voices or impersonations. But on the field, he’s seen a driven, determined player who isn’t concerned with his individual stats.

“He’s tough as nails,” Deming said. “Nothing fazes him. You don’t ever hear him complain. So, a big thing to emulate from him would be just to keep your mouth shut and grind.”

“He reminds me of (the) preacher on 'Friday Night Lights,'” Lewis said of a recurring character with the name Reverend Grady. “He’s quiet, but he’s a good, hard-working kid. He grinds in the weight room. He comes out here, practices at a high level every day. He doesn’t complain. He’s just a great guy to have above you and learn from.”

Sims’ latest display of his team-first mentality came this past offseason when he moved from defensive end to playing nose tackle.

It was a change where he had to start over a bit, learning the interior spot in Hauck’s defense for just one season of play. But it’s what the team needed from him, so he worked during the offseason, putting on about 10 pounds of muscle to get up to 280 pounds in his 6-foot-4 frame.

“He’s just taken to it like a duck to water,” Hauck said of Sims moving to nose tackle, what he called Sims’ natural position.

Sims has been a wrecking ball in the middle, blending together his strength, explosiveness, flexibility and mobility. His 40 tackles this season are just three shy of his career best.

He’s had a tackle for loss in each of the past three games, a sack in two of those three and a fumble recovery in that stretch, coming up clutch as the games begin to mean more.

“It’s all just taking coaching, like anybody else on the defense,” Sims said of why he’s excelled at nose tackle. “Our coaches come up with good game plans, the scout team gives us great looks and you feel more than confident going into the game.”

Hauck added: “I think he’s played the best football of his career the last four, five or six weeks. He’s a guy that plays hard. He’s powerful. He has understanding of what offenses are trying to do. You add that to the fact that he’s a good technician, it makes you a good football player.”

Sims would love to continue playing football at the pro level, but he’s not expecting that opportunity to be a given. He’s been majoring in health and human performance and is looking to possibly become a strength and conditioning coach or a personal trainer.

Before Sims gets to that post-college point, he and Montana are trying to return the level they were at when he was sitting in the stands for the upset over the top team in the country.

The Griz are already in position to be in the playoffs and could be looking to shock the nation again in the coming weeks, extending the careers for Sims and the seniors as long as possible.

“I think we have a team that the only thing that’s going to hold us back is ourselves,” Sims said. “I think everybody knows what we can accomplish, and we just need to go do it.”