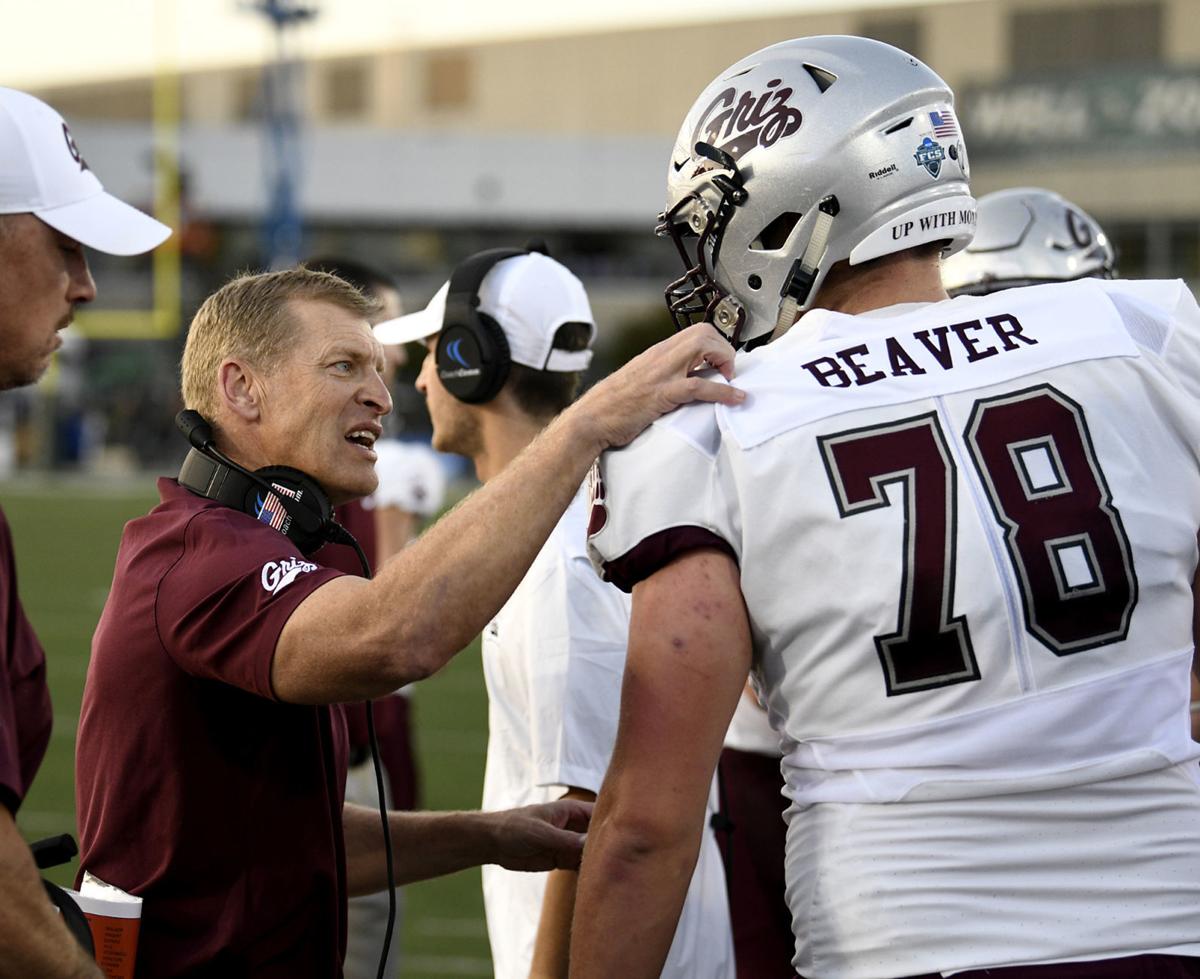 Montana coach Bobby Hauck (left) and Montana State coach Jeff Choate have both been impressive in November. Hauck’s Griz have won 14 of their past 15 November games, going back to his previous stint at Montana from 2003-09. Choate’s Cats have won eight games in a row since 2017. In this photo, Hauck talks with lineman Conlan Beaver during a recent game at Sacramento State. 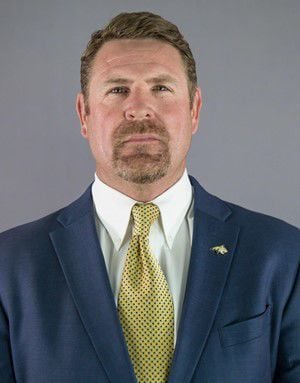 Hauck’s Griz teams have won 14 of their past 15 November games, going back to his previous stint at Montana from 2003-09. Choate’s Cats have won eight games in a row since 2017.

That’s a combined record of 22-1 — and the lone loss came in the 2018 Brawl of the Wild, a game that someone had to lose and that was decided by about one foot when the Cats forced a fumble on the goal line in the final minute.

Going further back, Hauck’s Griz teams have won 21 of their past 23 games in November. That other loss came in 2007 to Wofford in their first playoff game that season.

Hauck has previously talked about the need to be able to run the ball to excel in November. He mentioned that again in reference to the rivalry game.

"It’s November. The game’s in the state of Montana. We’re all from Montana. You got to be able to run the ball, and both sides are going to try to do that," Hauck said.

Choate started 2-3 at Montana State in November but is now 10-3 (including playoffs). His current eight-game win streak started with the 2017 win over Montana.

The Bobcats are trying to win their fourth consecutive game against the Grizzlies, which hasn’t happened since they won six in a row in the series from 1972-77 under legendary coach Sonny Holland.

“It’d be historic for us to do that. We’re excited for this opportunity,” senior receiver Kevin Kassis said. “We don’t view it as pressure, we’re just excited to go out there and show what we can do.”

Last year’s game was one of the most dramatic in the history of the rivalry, with MSU preserving a 29-25 victory by forcing the aforementioned fumble.

But the Bobcats have won the past three matchups largely on the strength of their running game. In those three contests combined, the Bobcats rushed for 919 yards, an average of 306.3 per game (and 5.5 per carry), and 11 touchdowns.

In 2016, they totaled 368 rushing yards, with quarterback Chris Murray running wild for 142 and two touchdowns in a 24-17 win in Missoula. It was a similar story the next year in Bozeman as MSU piled up 322 rushing yards in a 31-23 victory; Nick LaSane had a team-high 121 yards, including a 71-yard TD scamper in the second quarter.

Last year, the Bobcats rushed for 229 yards when then-quarterback Troy Andersen had a game-high 107 and three touchdowns.

The Bobcats will try to win this year with the same formula, and they're bringing the No. 1 rushing offense in the Big Sky Conference (259.9 ypg) into the game.

“Over 11 games you’ve got what you’ve got on film and you kind of are who you are,” Choate said. “I think a mistake can be made trying to do something different dramatically, and trying to reinvent the wheel so to speak.

“If we run the ball enough and effectively enough we’re going to get some creases. That’s the nature of it.”

Several changes were made on the Montana two-deep for the game this week, including some movement on the offensive line. If the starting O-line reflects the changes on the depth chart, it’ll be just the second time this season Montana goes with that group of five linemen.

Colton Keintz is listed as the start at right tackle in place of Cook. Keintz started the first three games this season at right tackle and made 14 consecutive starts there going back to 2018.

Wide receiver Sammy Akem is no longer listed as a starter, being replaced by Mitch Roberts. Akem has missed the last seven quarters after going down in the first quarter on Nov. 9 when he took a hit; he had appeared to suffer a foot injury while celebrating on Nov. 2.

At defensive end, Braydon Deming is listed as the starter over Joe Babros. They’ve each made five starts this season.

What will Andersen do for an encore?

As a true freshman two seasons ago, Andersen rushed for 64 yards and two touchdowns against Montana. Last year as the quarterback, he had 265 total yards of offense and rushed for three TDs.

Andersen has had a much larger defensive impact this season. He's played his best football over the past six games, accounting for 46 tackles (9.5 for a loss) with 5.5 sacks and an interception from his outside linebacker spot.

“The impact that he’s had (on defense) during our league games, I don’t know that anybody’s had a bigger impact on the defensive side than he has,” Choate said.

Andersen has also rushed for a touchdown in five of his past six games.

It remains to be seen how the Bobcats will use Andersen this week or how pronounced his role on offense will be, but the 6-foot-4, 230-pound Dillon product has been nothing less than a scourge to the Grizzlies in the past two seasons.

Montana has been on a revenge tour to return the favor to three Big Sky teams that won in Missoula in unthinkable fashion in 2018. The Griz have already avenged two of those losses and will go for the trifecta when they travel to Montana State on Saturday.

Montana blew out then-No. 4 UC Davis, 45-20, on the road to close September after collapsing in the second half last year in a loss.

The Griz then surged past Portland State, 38-23, on the road to open November after losing on a last-second field goal last year.

Up next is Montana State, which made a goal line stand in the final seconds to complete a 22-point comeback and keep Montana out of the postseason in 2018.

Montana State left tackle Mitch Brott will be making his 47th consecutive start on Saturday, which will tie him for the third-most in program history with former linebacker Jody Owens (2009-12) and former safety Kane Ioane (2000-03), the Bobcats’ current defensive coordinator.

Brott has started every game of his career, beginning with his redshirt freshman season as a right tackle in 2016. The 6-foot-6, 300-pound product of Billings West is still in line to challenge for the program record of 49 consecutive starts — provided the Bobcats play two or more playoff games — set in 2015 by former left tackle John Weidenaar.

Montana senior cornerback Justin Calhoun and wide receiver Jerry Louie-McGee are projected to make their fourth career start in the rivalry game. They’re the only current Griz seniors who can do that.

The unique thing about Calhoun is he started the first two Cat Griz games at wide receiver. He’s now expected to make his second start at cornerback.

“I have a lot of Favorite Griz players,” Curran tweeted, “but the fact that Justin Calhoun was a 4 year starter and started 2 years on each side of the ball doesn’t get enough attention. How many people have done that in College Football.”

Longtime Montana sports information director Dave Guffey, who worked at UM from 1978-2015, couldn’t think of a Grizzly during his time who started two Brawl of the Wild games on offense and two on defense.

Former Montana, Montana State coach Ty Gregorak won’t be coaching in the Brawl of the Wild for the first time since 2010 and just the second since 2003. He also won’t be in the television booth calling the game on ROOT Sports, which he’s worked for this year on a trial basis.

Saturday’s game sold out weeks ago, according to Montana State officials. Might a new attendance record be set?

The all-time high home attendance mark for an MSU football game was set in 2013, when 21,257 packed into Bobcat Stadium to watch the Cat-Griz game on Nov. 23 of that year. Montana prevailed, 28-14.

Greg Rachac covers Montana State football for the Billings Gazette. Follow him on Twitter @gregrachac or email him at grachac@billingsgazette.com

Frank Gogola and Greg Rachac have been covering Montana and Montana State all season. What are they expecting out of Saturday?