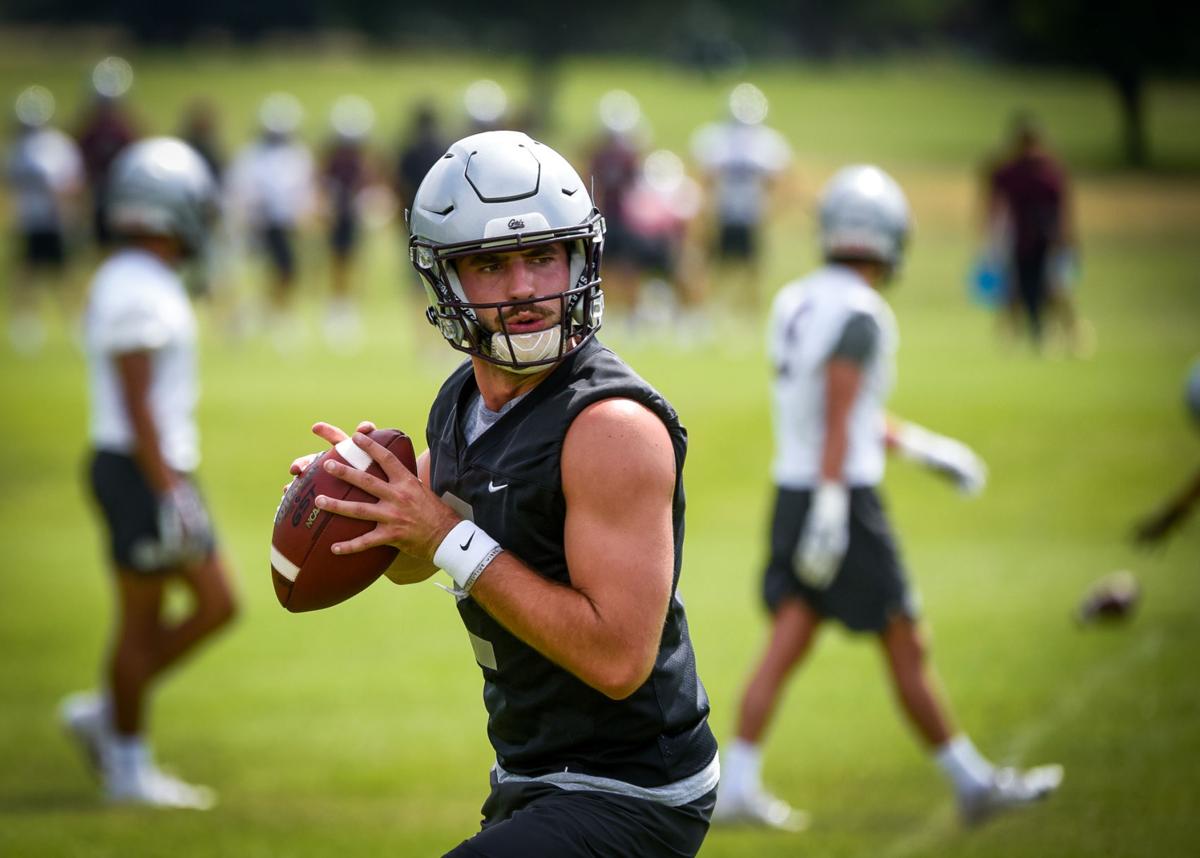 Montana senior quarterback Cam Humphrey runs through drills on the second day of preseason practice Tuesday at Dornblaser Field. Advice and tough love from his father has propelled Humphrey in his quest to earn the starting job. 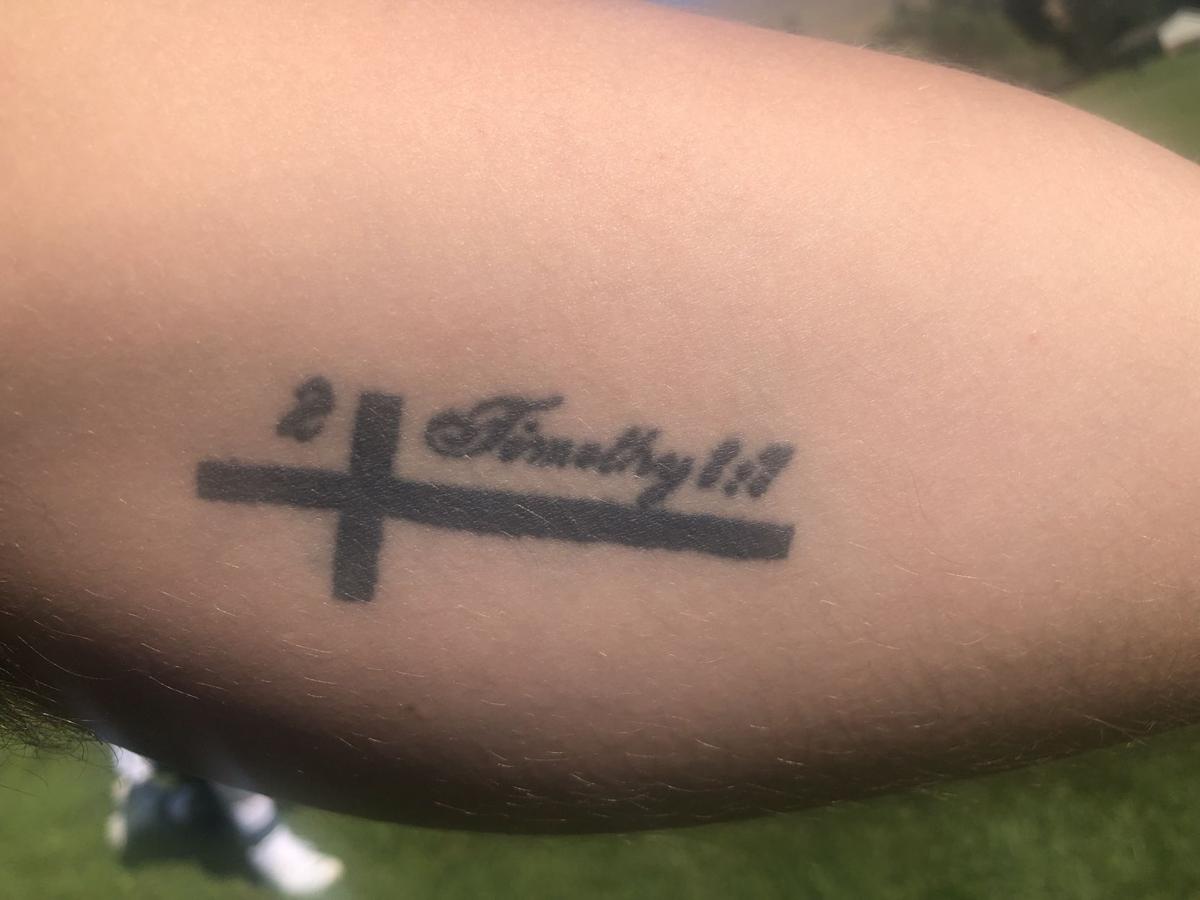 Montana senior quarterback Cam Humphrey has a tattoo of the Bible verse 2 Timothy 1:7 on his left bicep. He and his father, who coached him throughout youth football and still provides valuable advice, got the matching tattoos a few years ago in California. 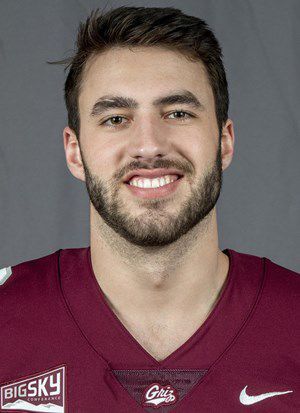 Montana senior quarterback Cam Humphrey runs through drills on the second day of preseason practice Tuesday at Dornblaser Field. Advice and tough love from his father has propelled Humphrey in his quest to earn the starting job.

Montana senior quarterback Cam Humphrey has a tattoo of the Bible verse 2 Timothy 1:7 on his left bicep. He and his father, who coached him throughout youth football and still provides valuable advice, got the matching tattoos a few years ago in California.

MISSOULA — Cam Humphrey’s long first day of preseason football camp wound down with him lying in bed around 10:45 p.m. Monday on the phone with his father, Ron Humphrey.

The Montana senior quarterback didn’t have the greatest first day of camp, getting picked off twice, but he knew his father wouldn’t let him sulk. He’s in a quarterback competition heading into his final college season anyway, so there isn’t any time to hang his head, and his father provides good advice.

“He just always tells me to put my best foot forward every day,” Humphrey said. “He always tells me to be a leader. He tells me you got to always believe you’re the best one out here. I tell myself that every day. I hope it translates onto the field, which I believe it does. I pay thanks to my dad for that.”

Growing up, Humphrey received tough love from his father, who coached him all the way through youth football. His father's hard-nosed attitude and demand for greatness didn’t stop when they left the field as they’d talk on the ride home and even at their house.

Humphrey admits it led to a shaky relationship at times, but he feels that has become stronger over the years. He believes those tough times have helped him on the football field as he’s gone from nationally lauded Boise State to Saddleback Community College to Montana.

“Coach (Bobby) Hauck preaches not to be soft on the football field, and if there’s one thing that I was raised not to be, it’s soft,” Humphrey said. “I can really give thanks to my dad for that. As tough as it was back then, it really made me into the man I am today.”

Humphrey and his father symbolized that growing friendship by getting the same tattoo on the inside of their left bicep a couple years ago in California — the Bible verse 2 Timothy 1:7, which reads: "For the Spirit God does not make us timid but gives us power, love and self-discipline."

Timid is one thing Humphrey can’t be as he competes for the starting job with highly touted sophomore Kris Brown, transfer Robbie Patterson and true freshman Daniel Britt. Hauck said Humphrey went into spring camp as the leader in the clubhouse; he reiterated that Monday.

“We want the quarterbacks to keep competing,” Hauck said. “You’re always one play away from somebody else being in there anyway. So, we’ve got to keep those guys competing. Certainly Cam’s in front, and that’s probably a question we should probably readdress maybe once a week and I’ll let you know where it is.”

Humphrey is by far the most experienced of UM’s four quarterbacks. He started three games in 2019 and both spring 2020 games, throwing for 1,474 yards and 13 touchdowns against three interceptions while rushing for 107 yards and one touchdown.

Brown is just 8-of-12 passing for 112 yards and one touchdown in college; Patterson and Britt have yet to take a snap in a Division I game. True freshman Carson Rostad, the 2018 Montana Gatorade Player of the Year from Hamilton, is now a linebacker, and transfer Kirk Rygol, who got third-team reps in the spring, is no longer on the roster.

Even while Humphrey seemingly has a leg up, he hasn’t been named the starter. Hauck is trying to get every quarterback to embrace competition, and that’s just what Humphrey’s father raised him to do, so he’s not going to get demoralized easily.

“I firmly believe that competition is what makes a football team the greatest they can be,” he said. “That starts with me. I want Kris to be as best as he can chasing me, and I want me to be as best as I can pushing me from Kris.

“If there’s no competition, then you find yourself staying stagnant, and that’s not going to evolve a team or a player at all. I believe that in football, especially at the quarterback position, you can’t really reach your full potential without someone chasing you from behind.”

Hauck was impressed with how Humphrey took on a leadership role in player-run practices over the summer. It’s a snippet of how he’s seen growth in Humphrey’s desire to be a starter and understanding of what it takes to do that after coming to UM in 2018.

In the past, Humphrey would tell himself at the start of practice that “today’s going to be a good day” and then move on. Now, he’s constantly reminding himself that every play, drive or quarter requires him to be the best he’s ever been.

“That’s the difference that I’ve learned is that you got to be laser-focused, you got to be intense, and you got to be locked in every single second of the two and a half hours we’re out here,” he said. “That’s what it takes to be a great Division I quarterback, especially at the University of Montana.”

Linebacker Marcus Welnel made some highlight plays during 11-vs.-11 competition. The junior from Helena broke up a pass and then forced Akron transfer Isiah Childs to fumble near the sideline a few plays later.

Childs, a freshman running back, responded later in that period with a touchdown run of at least 50 yards. He bounced left, weaved through traffic and raced down the left sideline.

Tight end Cole Grossman looked good for the second day in a row. One play that drew oohs and ahhs was a one-handed catch in stride as he reached the end zone. Grossman, who practiced with the first-team offense again, is still technically a freshman in terms of eligibility, having grayshirted in 2018, redshirted in 2019 and getting the NCAA's extra year because of COVID.

In the final set of 11-vs.-11 work, Humphrey was 1-of-4 passing, hitting Mitch Roberts on a corner route. The drive ended with Carver Gilman missing a field goal wide left from the left hash. Brown completed one pass before getting picked off by freshman safety Jaxon Lee, who jumped the route and returned the ball about 60 yards for a score that ended practice.

The Montana football team and coach Bobby Hauck had reason to be excited as preseason practice started Monday night.