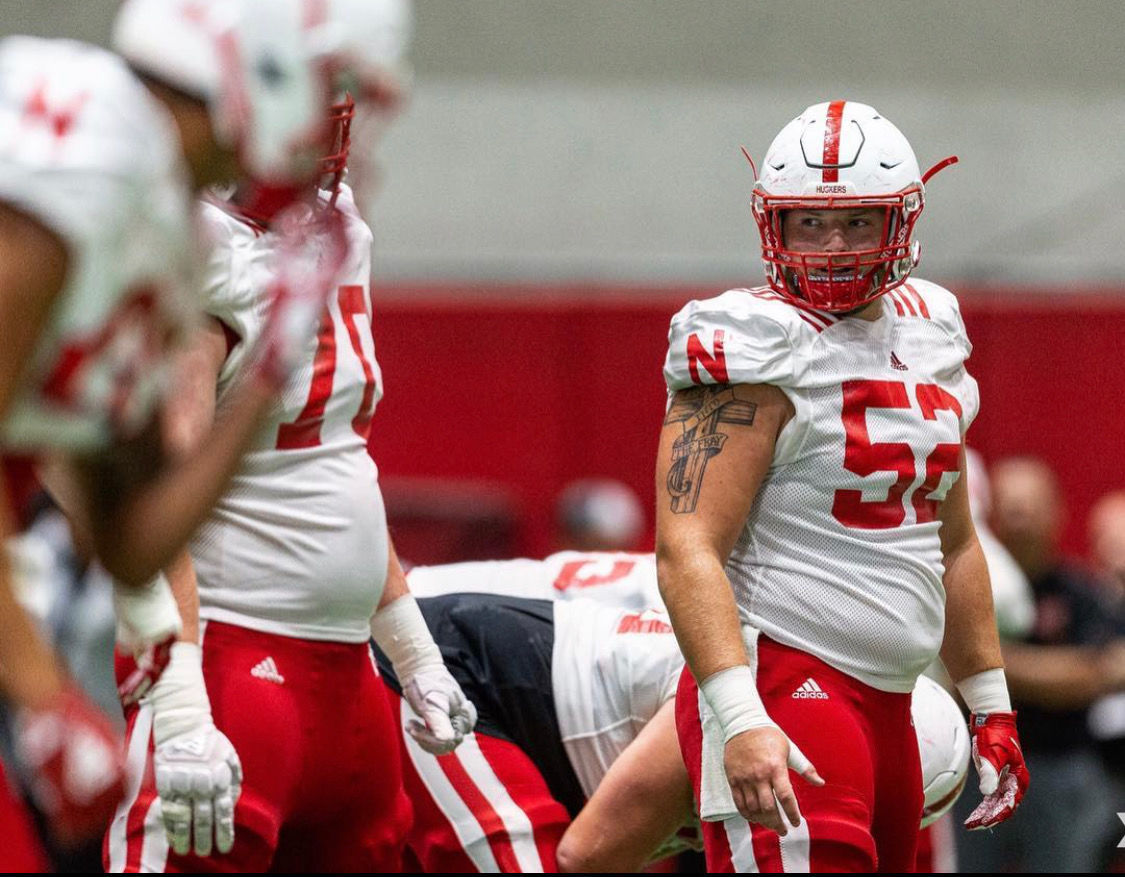 Incoming Montana offensive lineman AJ Forbes practices with the Nebraska Cornhuskers, where he spent the past two seasons. He'll have three seasons of eligibility with the Griz and is able to play immediately this coming season. 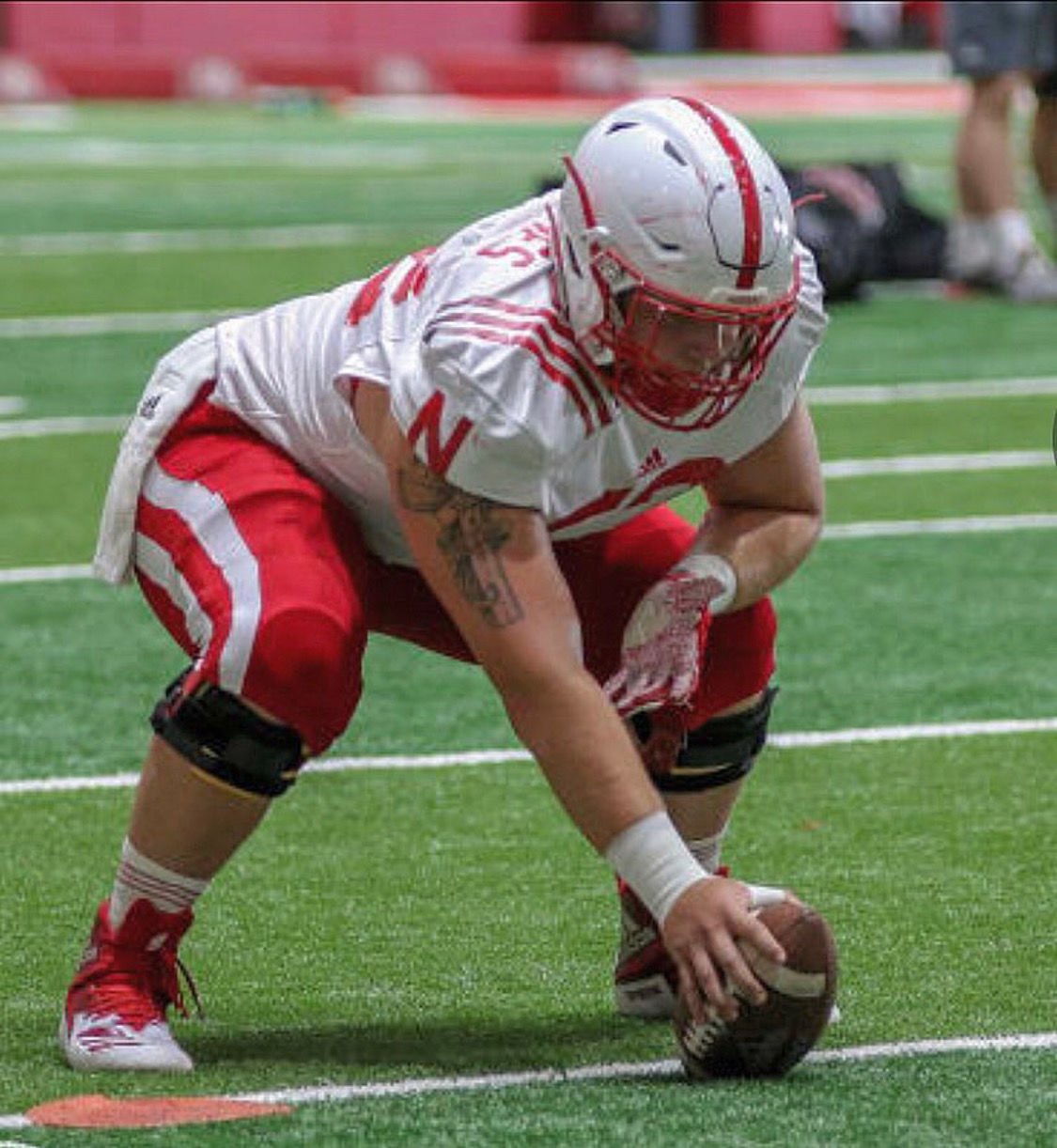 Incoming Montana offensive lineman AJ Forbes is in his stance to snap the ball during a Nebraska practice. Forbes is expected to compete for the starting center job with the Griz this coming season. 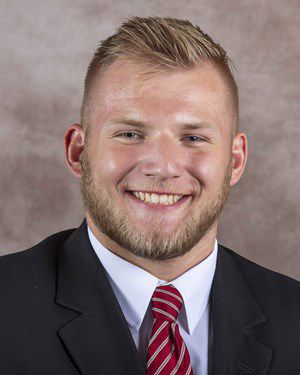 Incoming Montana offensive lineman AJ Forbes practices with the Nebraska Cornhuskers, where he spent the past two seasons. He'll have three seasons of eligibility with the Griz and is able to play immediately this coming season.

Incoming Montana offensive lineman AJ Forbes is in his stance to snap the ball during a Nebraska practice. Forbes is expected to compete for the starting center job with the Griz this coming season.

MISSOULA — AJ Forbes achieved one dream when he got the chance to join his home state Nebraska Cornhuskers, even though he had to walk on instead of getting a scholarship.

Now, the offensive lineman is hoping to soon make another dream a reality by seeing playing time in a college game and becoming a starter. It’s a quest that he felt like he probably had to leave Nebraska to accomplish.

Forbes chose Montana out of 17 schools, making his commitment late Monday night after entering the transfer portal less than two weeks ago.

“I didn’t enter the transfer portal to sit on the bench. I’m coming in hair on fire trying to get a spot. That’s one of the things that Montana presented to me was the ability to have a fair and honest chance at fighting for a position on the offensive line. That was really attractive to me.”

Forbes will have three years of eligibility remaining when he joins the team for the 2020 season, hoping to make it to campus during the summer. He’ll be immediately eligible to play because he’s a dropdown from the FBS level.

Trying to get into better shape, Forbes has dropped from 310 pounds to 301 as of Tuesday and joked he’s 6-foot-2½ and maybe 6-3 on a good day, although Nebraska listed him at 6-4. He’s projected to be an interior lineman, he said, and compete for the starting center spot vacated by the now-graduated Cy Sirmon.

“I feel like one of the biggest mental strong suits for me is going out there and trying to fight somebody, fighting for very inch and fighting until the echo of the whistle,” Forbes said. “I’m a guy that’s going to give you everything I've got for as long as you tell me to.

“From a physical standpoint, I feel I’m a guy that can get out in to space really well. I can pull, I can reach a defensive tackle. At the same time, I’m cognizant enough in pass protection to really understand what a defense is doing and understand what they’re going to try to do after the snap.

“I also take a lot of pride in the intellectual part of the game, which I think gives me a really good advantage just because I can look at a defense. I can look at linebackers that are off levels and one’s closer to the line of scrimmage than the other one. And I can tell this guy’s blitzing, so I can switch a protection or switch a call to account for that.”

Forbes has some versatility to move around the line after practicing at all five spots at Nebraska. He went there believing he’d be working with the centers but spent a good chunk of his redshirt year at right tackle because of depth issues. He moved back to center for most of his sophomore year but worked with the left tackles for some time when they needed bodies.

Forbes made the travel roster for four of the five road games but never played last year. When spring camp was canceled in Nebraska, he re-evaluated his potential there, talked with coaches and decided it was in his best interest to transfer for a better shot at earning playing time.

“I wasn’t a walk-on that was dreaming of putting on a jersey and sitting on the sidelines for five years,” Forbes said. “I was a guy that was on a mission and really had a chip on my shoulder and really wanted to compete for a spot. That’s kind of what I envisioned going into Lincoln.

“I think getting out of Lincoln gave me the best chance to play at the level that I know I can play at. I have a lot of respect for (head) coach (Scott) Frost and coach Greg Austin, my O-line coach, and every coach that’s there. I think it was best for me from a playing opportunity aspect to transfer elsewhere. That’s the reason why I entered the transfer portal.”

Forbes still got something valuable out of his time in Nebraska even though he didn’t get to play. Banging bodies with Big Ten athletes in practice for two years strengthened him in new ways. He’s hoping to bring that to Montana.

“My time at Nebraska really taught me a lot about mental toughness,” Forbes said. “I was already physically tough. I was physically able to take pretty much everything that someone could throw at me. It was the mental and emotional toughness aspect of my game that really grew at Nebraska. I had to fight every day to prove to my coaches that I could do something.

“I’m definitely not only a better player coming out of that, but I’m a better man. I feel like now going through what I went through at Nebraska, mentally and emotionally, I’m stronger. I feel like that’s going to be going with me for the rest of my like. I think like I’m better prepared now to take on any challenge, whether it be in football or life, to take it head on and really kick its butt. That’s what I’ve really taken out of my time at Nebraska.”

Forbes was bombarded with offers after entering the transfer portal on May 6. He had 16 other offers besides the Griz, mainly from FCS teams and a few from Division II teams. Idaho State and Northern Colorado were also Big Sky Conference teams that offered him.

It was quite the different recruiting process from when he was coming out of high school as an all-state player whose offers were all from Div. II schools, aside from the Air Force Academy. He talked with Div. I recruiters and heard they liked his film and grades — he's been on the Nebraska scholar-athlete honor roll twice — but he didn’t get offered a scholarship because they thought he wasn’t tall enough to be a D-I lineman at barely 6-2 at the time, he said. It’s something that still drives him.

“I take a lot of pride in that, I wouldn’t say in being a shorter guy but just being that guy that can go out there and really scrap it out with a lot of these 6-4, 6-5, 6-7 guys that get all the attention,” said Forbes, who narrowed his list of schools to transfer to down to Montana, Southeastern Louisiana and Abilene Christian after a stressful week and a half of round-the-clock phone calls with recruiters.

Forbes had known about Montana since looking into them when he thought he may be able to play at the FCS level coming out of high school. Talking with the Griz coaches and seeing the fan support on social media when he shared his offer from UM helped sell him on Missoula.

“I was kind of a closet Griz fan ever since high school, and I knew that they were one of the best teams in the FCS,” Forbes said. “With the relationships I built, I could tell that coach Germer, coach Hauck, coach Green, coach Rosy are just genuine, nice people. I really appreciated that.

“There were also some parallels between the way Nebraska fans and Montana fans love football. Montana’s fan base is incredible. They reached out to me and congratulated me and welcomed me to the community. That’s really what drew me there: just the community reception of me and the ability to go out there and play some really good football.”