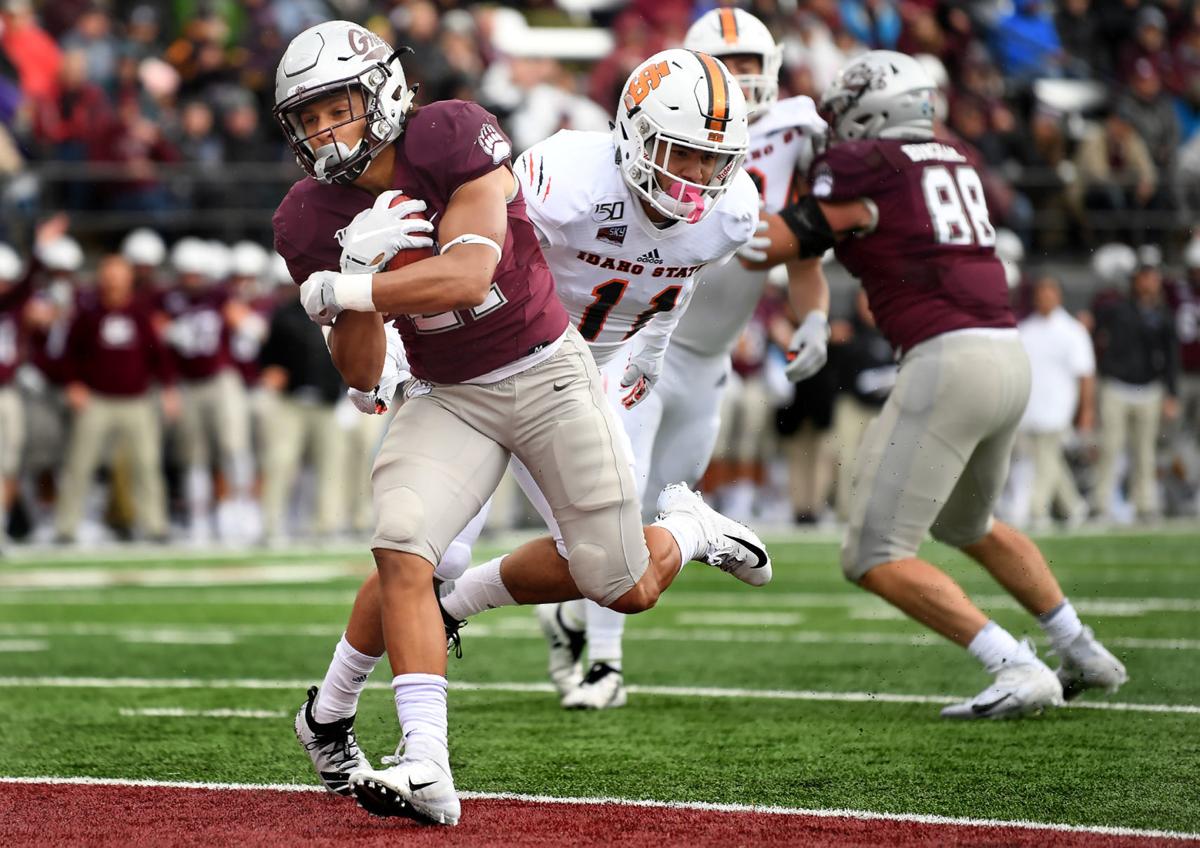 Montana's Marcus Knight runs the ball into the end zone for one of his three touchdowns during Saturday's 59-20 homecoming win over Idaho State in Washington-Grizzly Stadium. 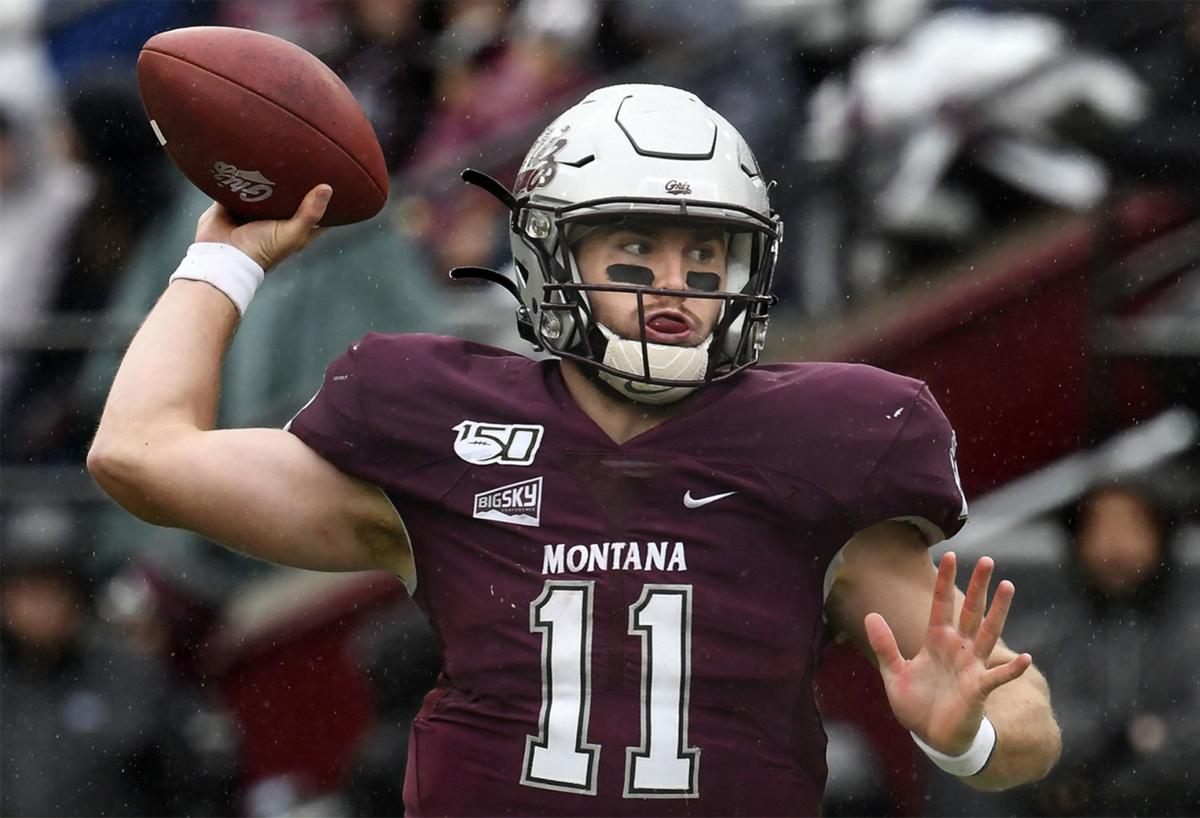 Montana quarterback Dalton Sneed looks to throw in the second half. Sneed threw for 397 yards and two touchdowns. The senior also led the team in rushing with 67 yards and a pair of touchdowns on the ground. 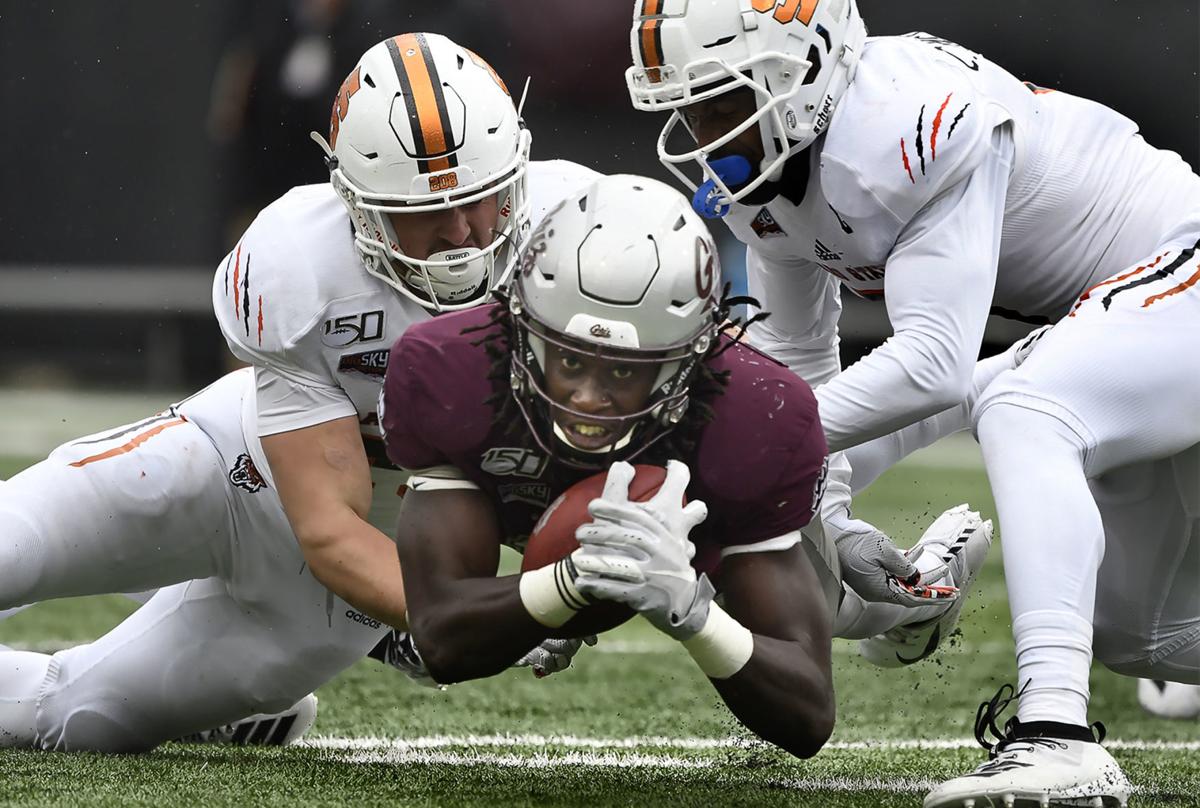 Montana's Samuel Akem braces himself before he hits the ground as a pair of Idaho State defenders tackle him Saturday in Missoula. Akem had 10 catches and 135 yards. 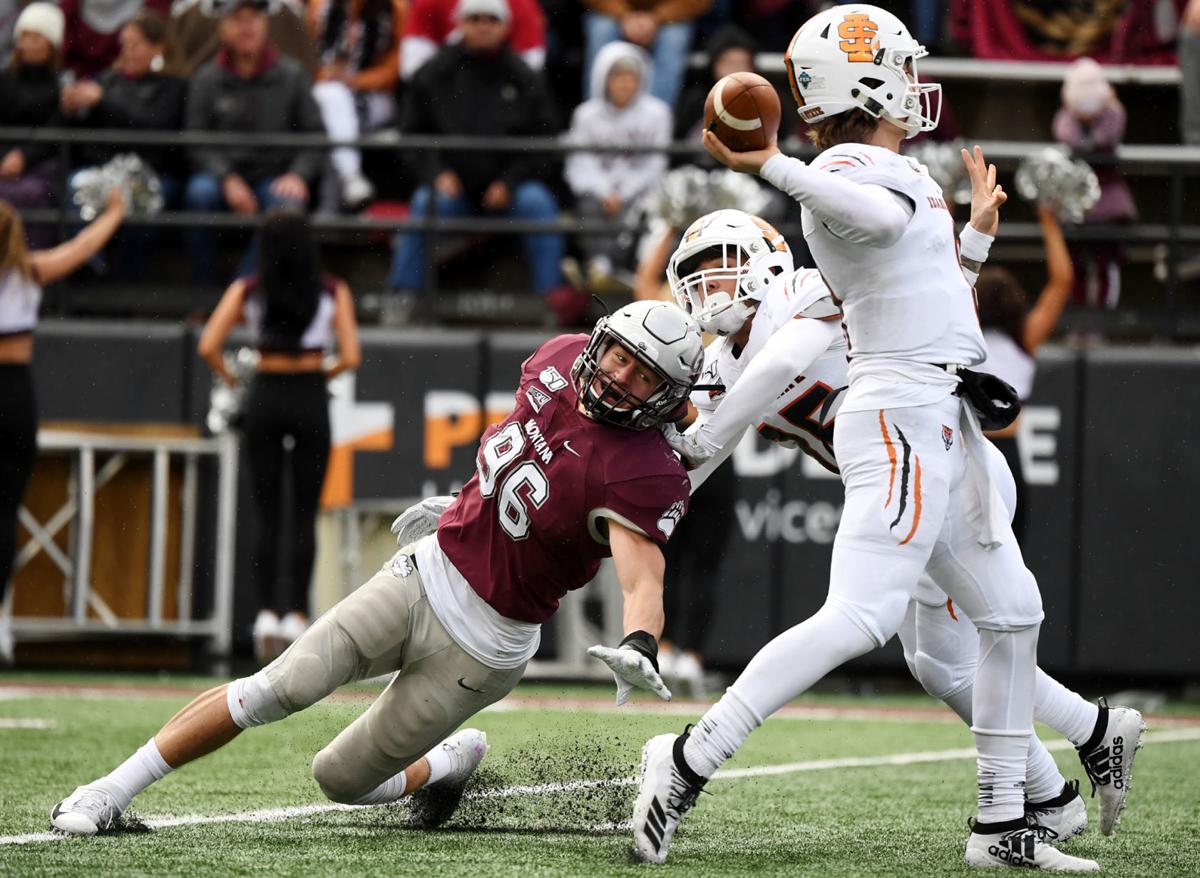 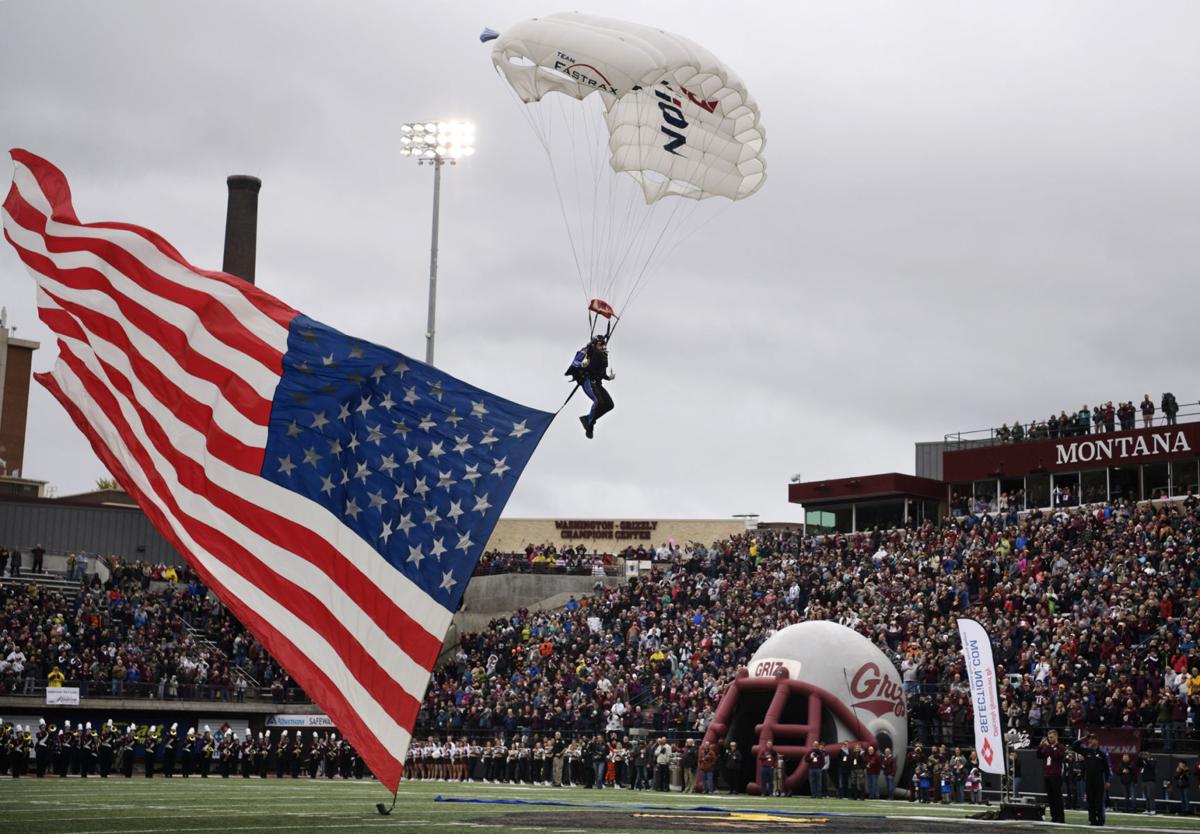 A sky diver carrying the American flag lands in Washington-Grizzly Stadium during the national anthem Saturday. 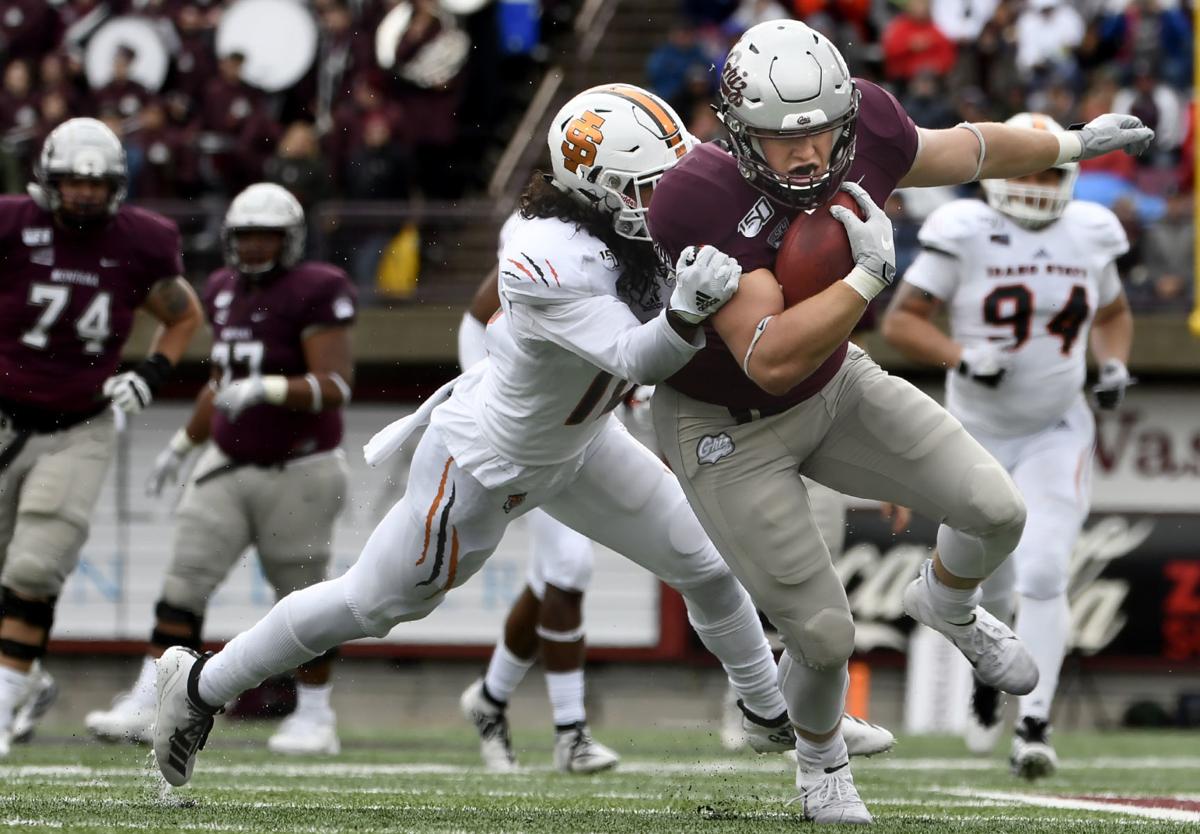 Montana's Marcus Knight runs the ball into the end zone for one of his three touchdowns during Saturday's 59-20 homecoming win over Idaho State in Washington-Grizzly Stadium.

Montana quarterback Dalton Sneed looks to throw in the second half. Sneed threw for 397 yards and two touchdowns. The senior also led the team in rushing with 67 yards and a pair of touchdowns on the ground.

Montana's Samuel Akem braces himself before he hits the ground as a pair of Idaho State defenders tackle him Saturday in Missoula. Akem had 10 catches and 135 yards.

A sky diver carrying the American flag lands in Washington-Grizzly Stadium during the national anthem Saturday.

MISSOULA — Montana quarterback Dalton Sneed had a simple message for his team when the Griz went down 17-0 less than one minute into the second quarter of their game Saturday against Idaho State.

“I was just telling the guys, ‘Hey, nothing new,’” Sneed said. “We know what we can do on the offense, where we’re stopping ourselves here. There’s plays where we weren’t able to execute on third down and put our defense back on the field.

The eighth-ranked Griz turned the chipping away into an avalanche as Sneed put together a career day and the defense came to life while the skies cleared up and a rainbow hung over the north end zone of Washington-Grizzly Stadium.

“Obviously that’s a great win for us,” Montana coach Bobby Hauck said. “Idaho State’s got a good football team. They’re well coached. They were ready to play. They came in and punched us and had us down big early on. So, a lot of credit to them. And then a lot of credit to our guys, too, because we don’t have a bunch of give-in in us.

“They should be proud of their guys for how they came into this game and went toe-to-toe. Then our guys, I’m proud of because of our resilience and our ability to fix things when they aren’t going well and go out and get the win. So, I’m proud of our team, and I’m glad on this great homecoming weekend we got the ‘W.’”

The thing about the 17-point comeback is Montana had never trailed by more than three points against an FCS team this season. But with a quarterback like Sneed, who’s playing at the caliber of a conference MVP, there’s a trust in him among his teammates and the coaching staff.

The 6-foot-1, 216-pound senior from Scottsdale, Arizona, finished with a career-high 464 yards of total offense and four touchdowns. The last Grizzly to go over 500 yards was Brian Ah Yat in 1996.

“That comes from back in January when we wanted to emphasize finishing and never backing down,” Sneed said. “We get backed into a wall early, 17-0, we’re going to come out swinging. That’s what coach Hauck has emphasized since January. So, it’s good to see that pay off and us really initiate that on the field.”

With awareness in the pocket, Sneed completed 26 of 41 passes for 397 yards with two touchdown passes. Showing toughness on the ground, he ran 16 times for a team-best 67 yards and two scores.

It was a huge correction from the first three drives, when he started 3-of-8 passing for 39 yards and the Griz came up without any points despite getting into Idaho State territory twice.

“As we got more comfortable, I’d say this about Dalton, his stat line’s pretty fantastic,” Hauck said. “But in his practice this week he was pretty fantastic as well. But, he’s such a competitive guy I think he was awfully juiced up and wanted to be perfect during the game. We missed some things in the first quarter and after that he was money. It was just a great game by him.”

Sneed was able to rely on trusty receivers Sammy Akem and Samori Toure. Akem had a career-high 10 receptions for 135 yards and caught a 25-yard score to put the Griz up 31-20 in the third quarter. Toure led all receivers with a career-high 188 receiving yards on eight catches, including an 8-yard touchdown reception to make it 38-20.

The Griz found success with chunk plays, collecting 10 passing plays of 15-plus yards. Toure had five of those receptions, including 180 yards in the second half, and Akem had three.

“That’s the beauty of our offense,” Sneed said. “You get the ball in the playmakers’ hands and let them do the rest because that’s what we have all-around.”

The Griz scored 24 unanswered points in the second quarter to take a 24-17 lead into intermission. The team that’s surged in the second half this year then outscored the Bengals 35-3 in the final two quarters.

Even when the backups were called in, third-string running back Adam Eastwood scored a 51-yard rushing touchdown in the fourth quarter.

“I think we just started flowing on offense,” Sneed said. “Once we hit our rhythm and are able to start going fast, that’s when things clicked for us. I was able to start taking the easy throws and getting the balls to our playmakers, and they were able to do the rest.”

After going down 17-0 just 15:43 into the game, Montana sophomore running back Marcus Knight rushed for all three touchdowns during the 24-0 blitz, running for scores of 4, 2 and 2 yards. Brandon Purdy tied the game, 17-17, with a 35-yard field goal.

Sneed found a reliable target inside with Akem, who had 104 receiving yards in the second quarter. Montana moved the chains with the added help of penalties. The Bengals were called for seven penalties for 71 yards in the first half and 11 for 121 in the game.

The Griz had fallen down 17-0 as Idaho State struck for big plays, including a 71-yard pass to Mikey Dean and a 71-yard touchdown run by Flanagan, who spun through poor tackle attempts by the Griz. Flanagan added a 1-yard touchdown run, and Kevin Ryan made a 35-yard field goal.

Montana trailed 10-0 after one quarter. The Griz had allowed just 21 first-quarter points through their first five games.

“We probably awoke the sleeping giant,” Idaho State head coach Rob Phenicie said. “I doubt if they were overlooking us. But if they were kind of trying to get their feet, we certainly woke them up, and they responded.”

Bill Speltz: Grizzlies get up off the canvas, knock the Bengals' block off

MISSOULA — Into each life a little rain will conspire to draw one's ire.