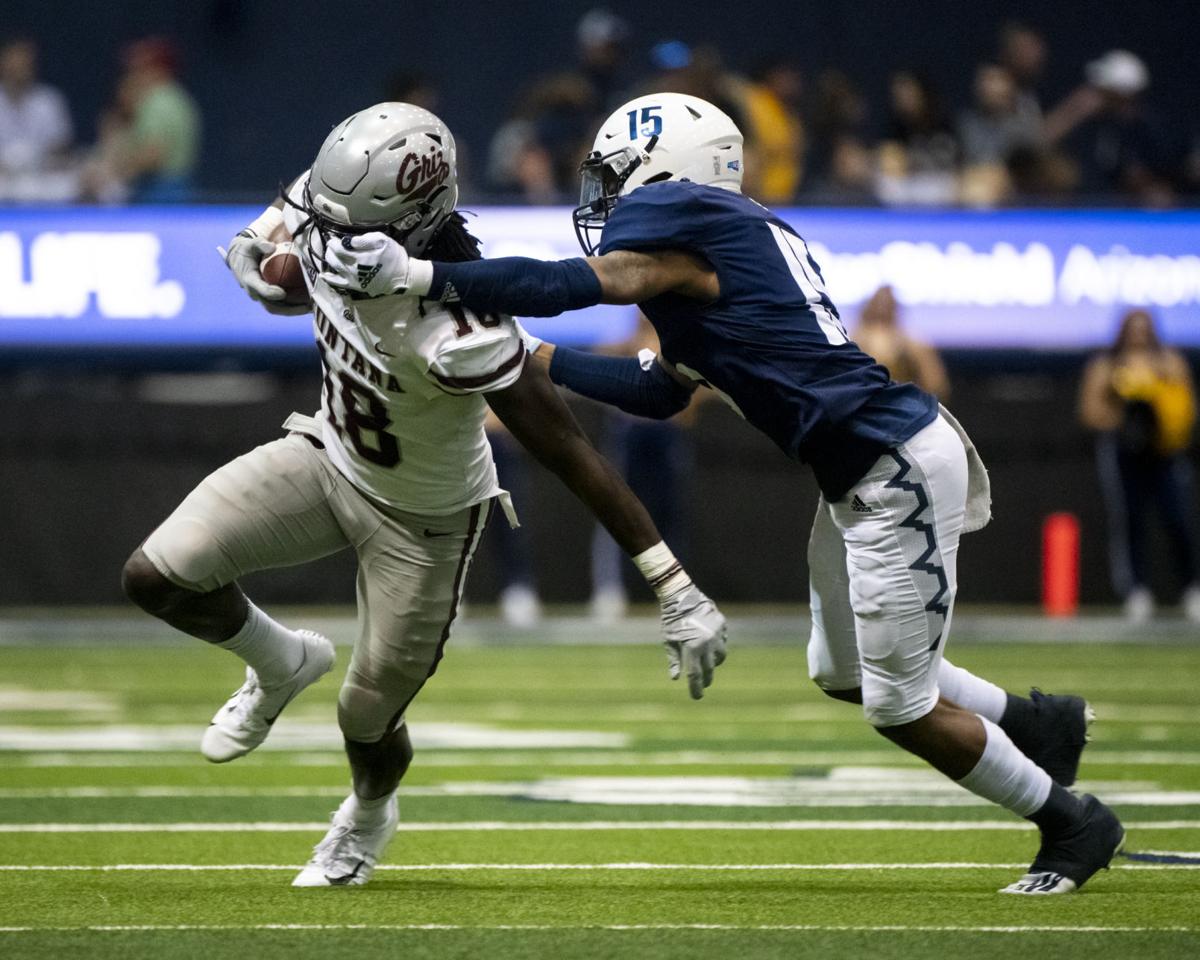 Northern Arizona’s Devontae Ingram (right) grabs the facemask of Montana’s Samuel Akem while he runs the ball Saturday at the Walkup Skydome in Flagstaff, Arizona. The Griz defeated the Lumberjacks, 30-3. 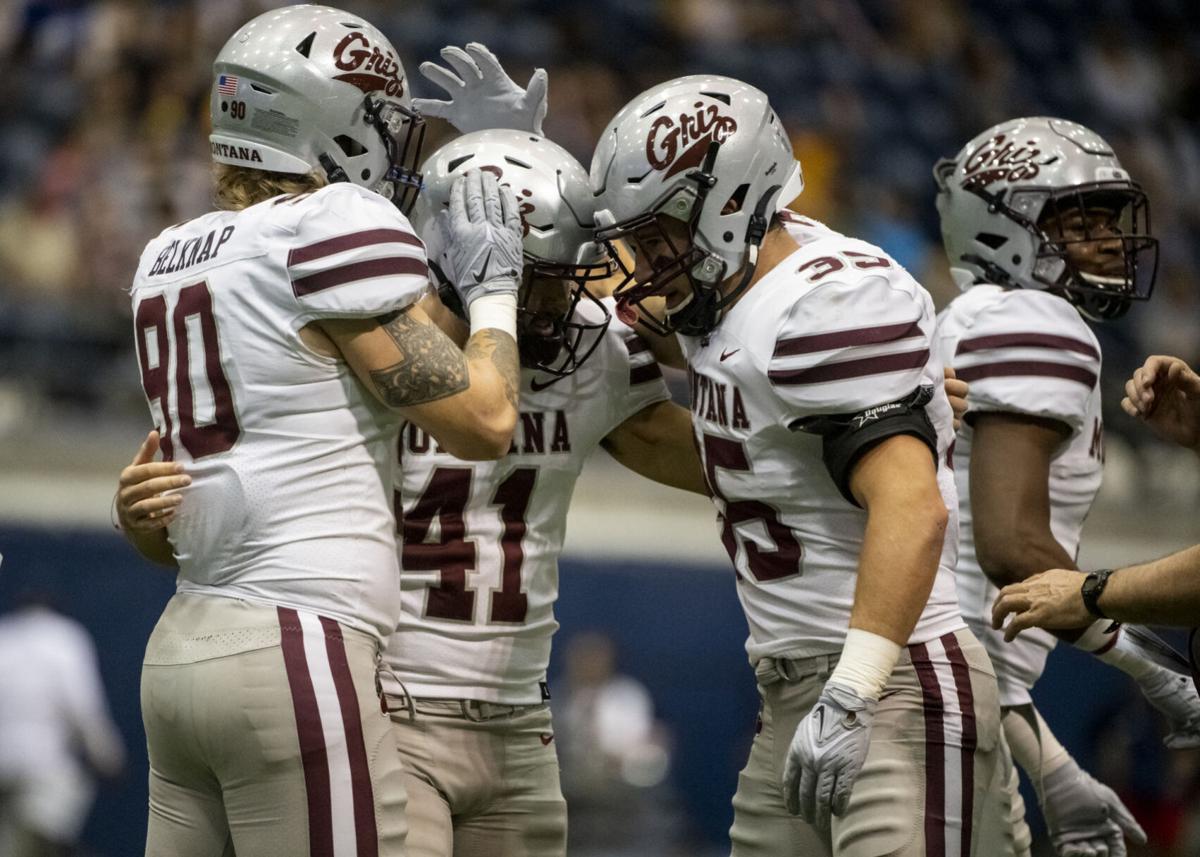 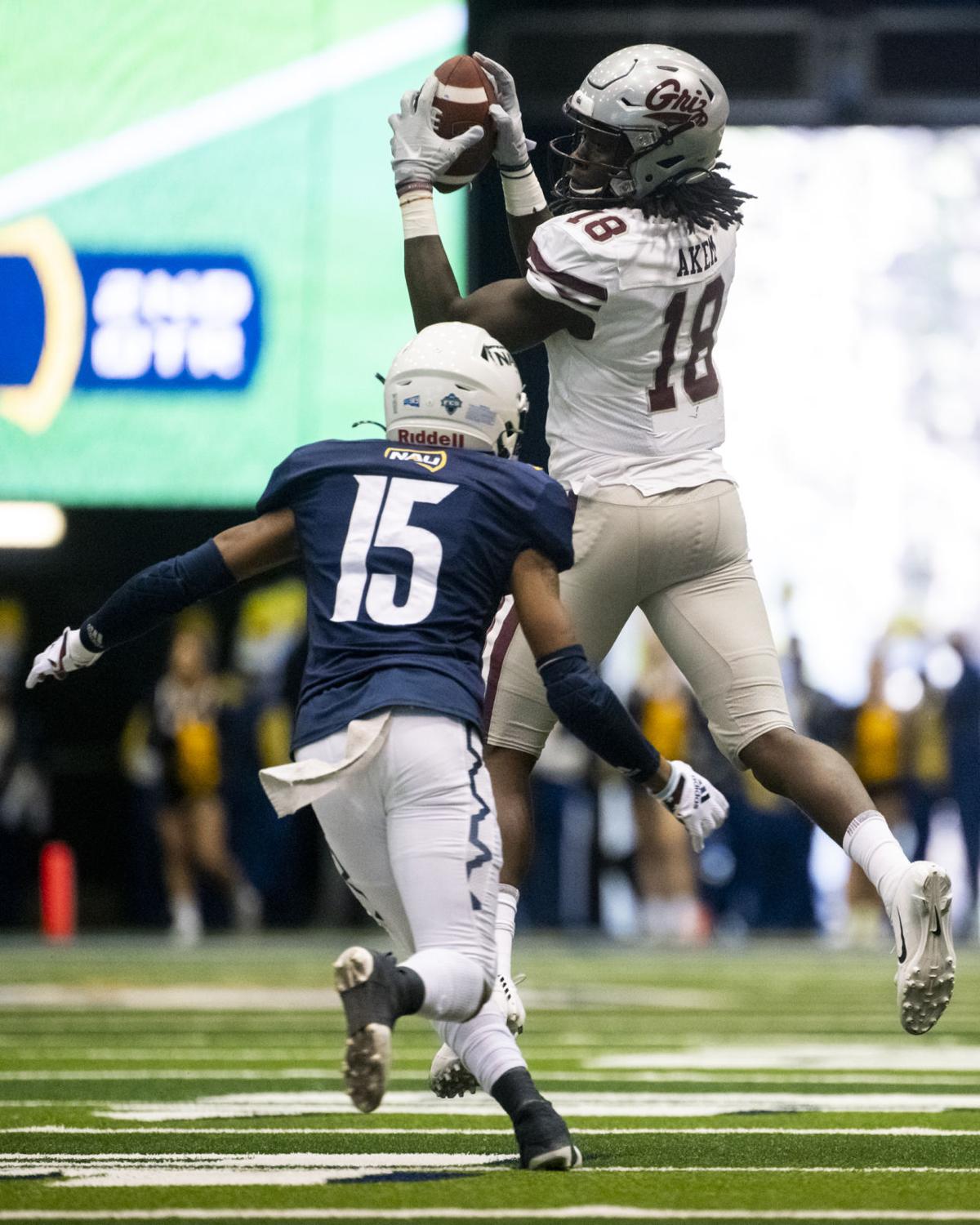 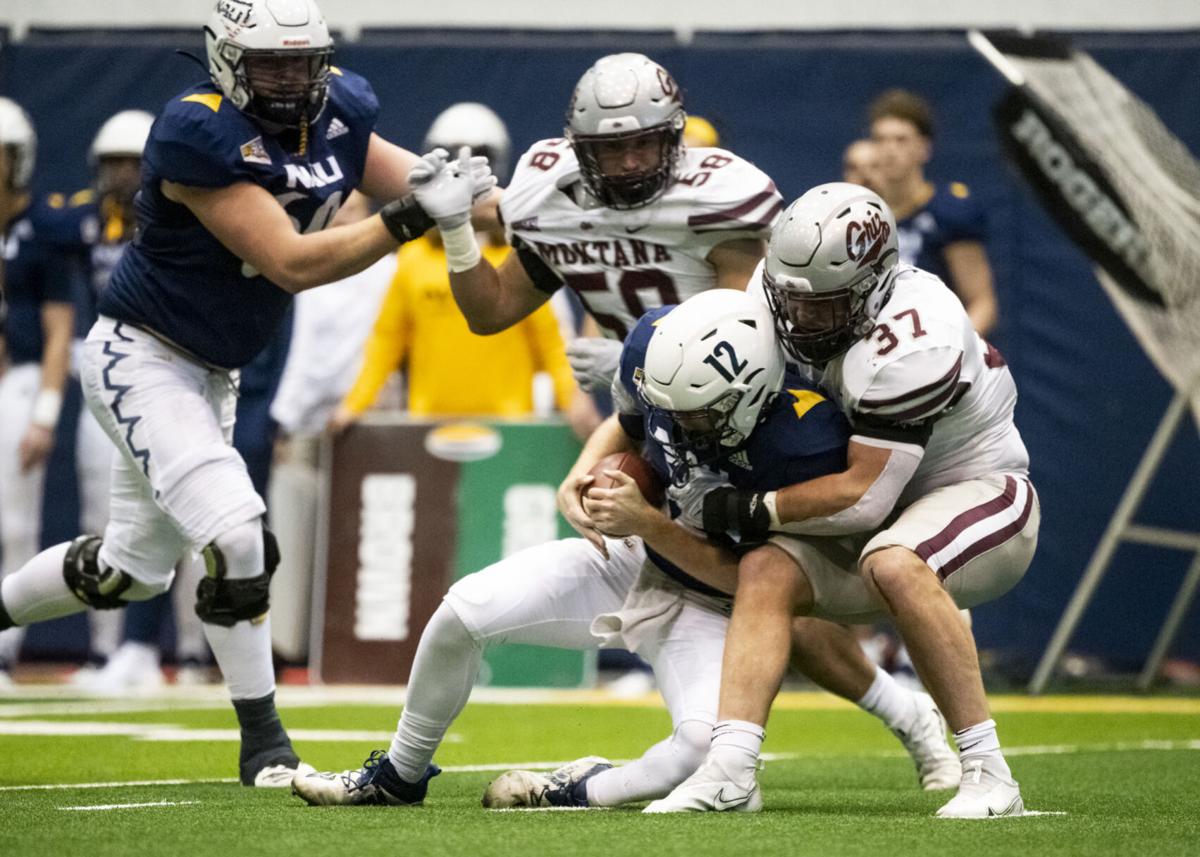 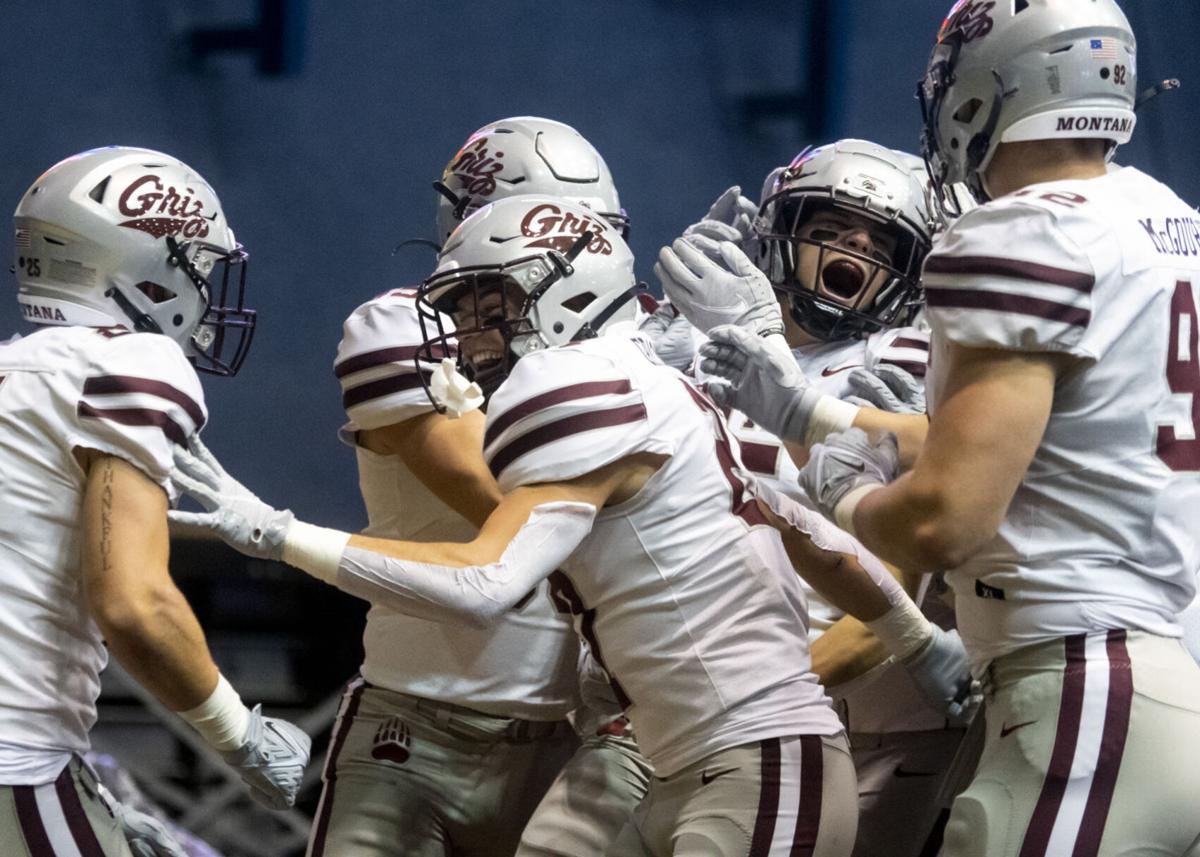 The Griz celebrate after Corbin Walker, right, intercepts the ball in the end zone during Saturday's game. 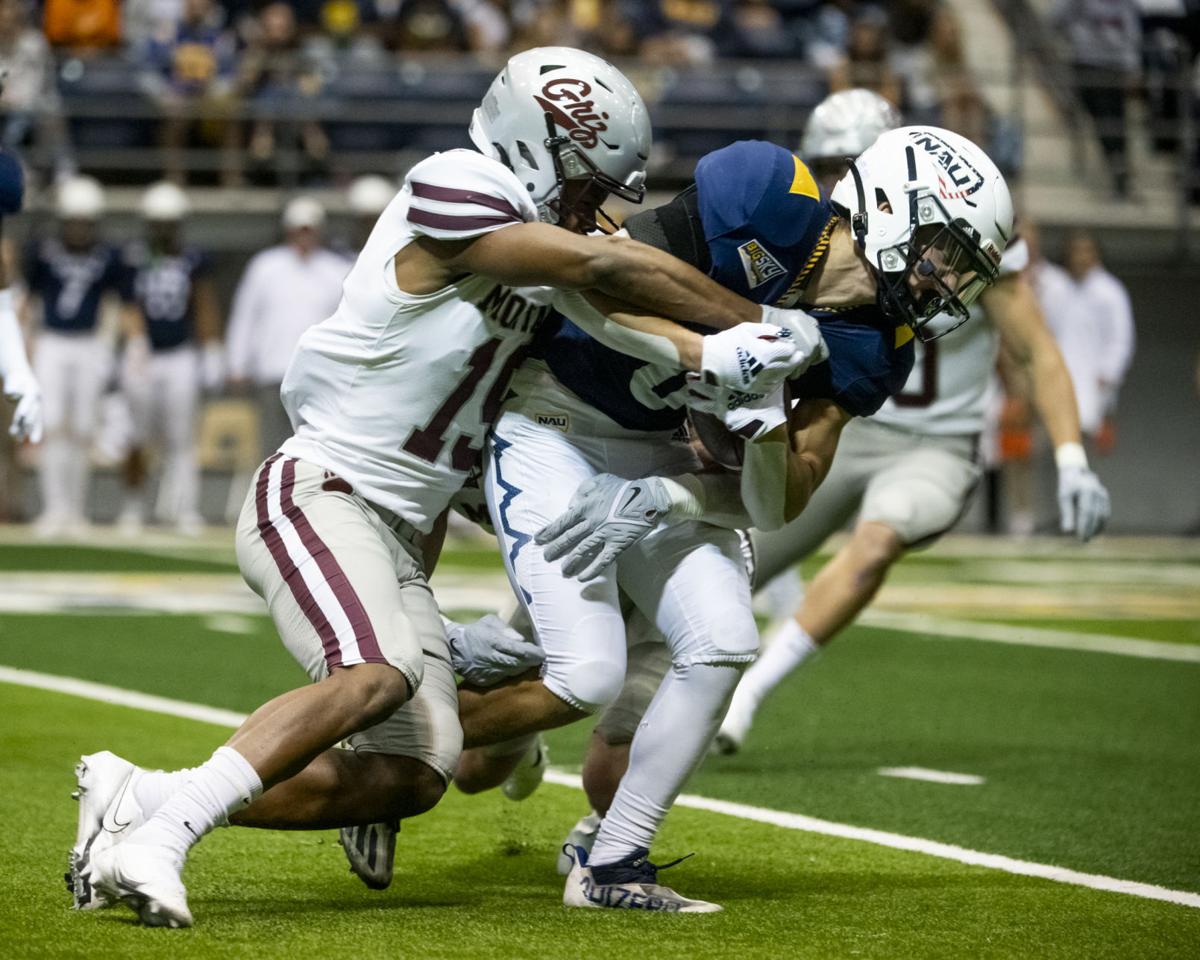 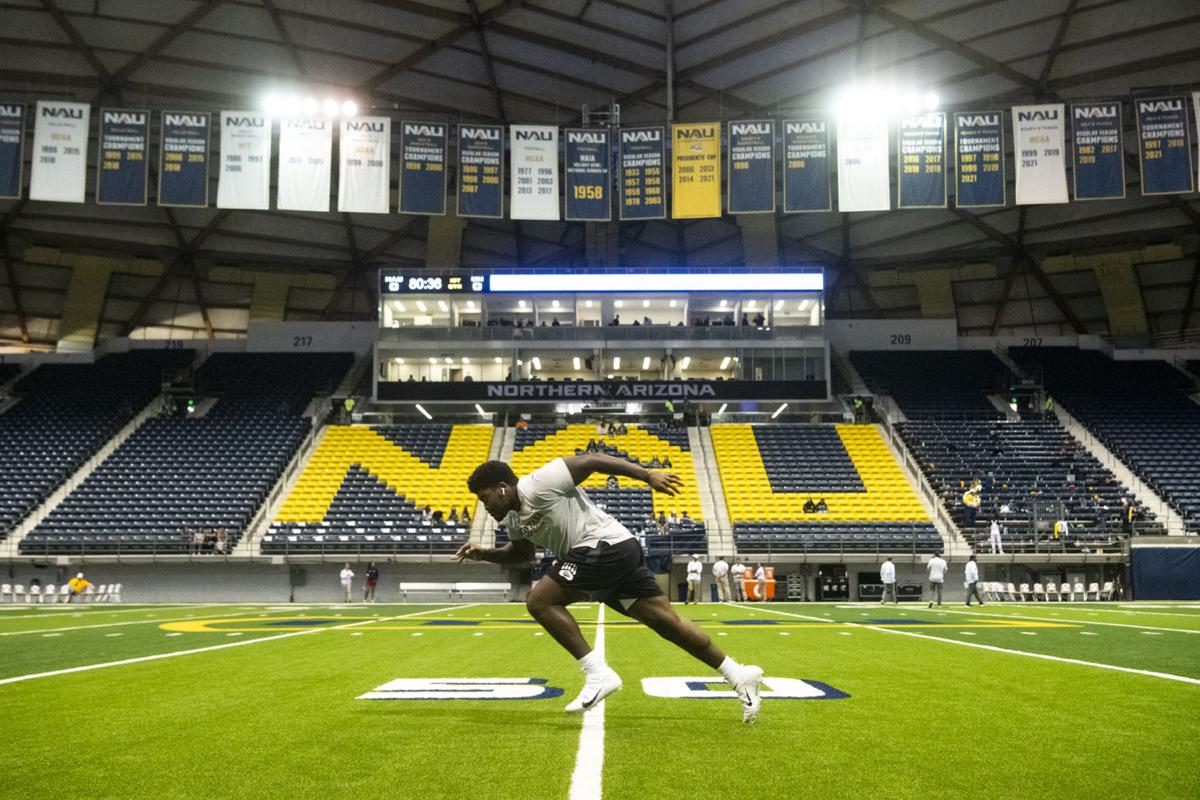 The Griz warm up before kickoff during the college football game between the Griz and Northern Arizona at the Skydome in Flagstaff, Arizona, Saturday, Nov. 13, 2021. 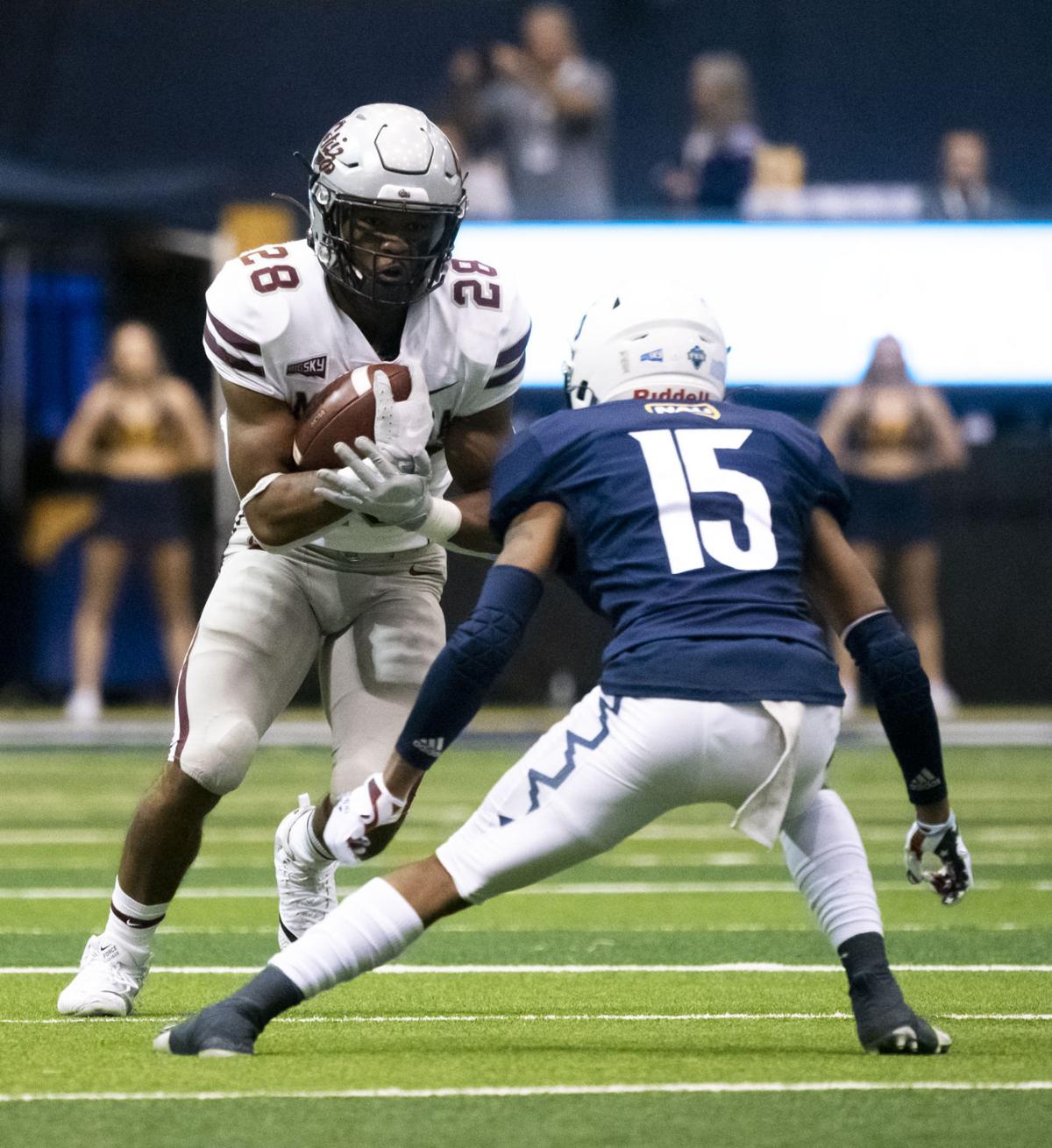 Montana’s Isaiah Childs (28) runs the ball against Northern Arizona’s Devontae Ingram (15) during the college football game between the Griz and Northern Arizona at the Skydome in Flagstaff, Arizona, Saturday, Nov. 13, 2021. 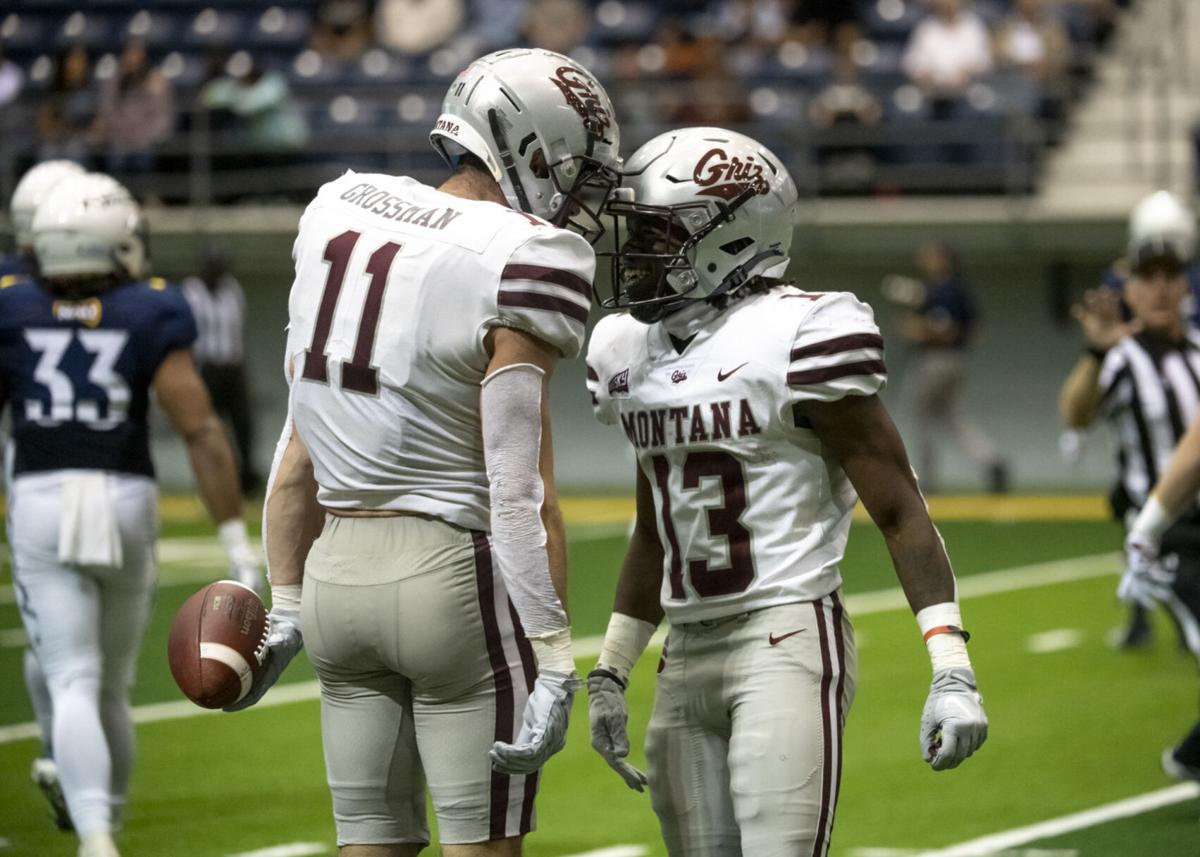 Montana’s Cole Grossman (11) and Xavier Harris (13) celebrate during the college football game between the Griz and Northern Arizona at the Skydome in Flagstaff, Arizona, Saturday, Nov. 13, 2021.

Northern Arizona’s Devontae Ingram (right) grabs the facemask of Montana’s Samuel Akem while he runs the ball Saturday at the Walkup Skydome in Flagstaff, Arizona. The Griz defeated the Lumberjacks, 30-3.

The Griz celebrate after Corbin Walker, right, intercepts the ball in the end zone during Saturday's game.

The Griz warm up before kickoff during the college football game between the Griz and Northern Arizona at the Skydome in Flagstaff, Arizona, Saturday, Nov. 13, 2021.

Montana’s Isaiah Childs (28) runs the ball against Northern Arizona’s Devontae Ingram (15) during the college football game between the Griz and Northern Arizona at the Skydome in Flagstaff, Arizona, Saturday, Nov. 13, 2021.

Montana’s Cole Grossman (11) and Xavier Harris (13) celebrate during the college football game between the Griz and Northern Arizona at the Skydome in Flagstaff, Arizona, Saturday, Nov. 13, 2021.

FLAGSTAFF, Ariz. — Montana junior safety Robby Hauck came flying off the left side of the offensive line and pulverized Northern Arizona quarterback Cale Millen in the back, sending the football tumbling to the turf in the Walkup Skydome on Saturday.

Griz junior linebacker Pat O’Connell was there to recover the ball and rumble 14 yards into the end zone. It was one of four turnovers forced by UM in a dominant defensive display, but this one helped put the game out of reach as the Griz turned their 13-3 lead into a 20-3 advantage.

The ninth-ranked Griz had their longest shutout streak of the season, finished with 14 points off turnovers and cornerback Justin Ford extended his school-record streak to eight games with an interception as UM rolled to a 30-3 win.

“It was a fun day on defense,” senior linebacker Jace Lewis said. “The guys are getting interceptions. Justin got his eighth. It was just cool to see. Guys were flying around to the ball, so it was a fun day on D for us.”

The Griz improved to 8-2 overall and 5-2 in the Big Sky as they won their season-best fourth consecutive game. They picked up their first win in Flagstaff since 2011, although it was only their third trip to NAU since that game a decade ago.

Montana now heads into its showdown against Montana State playing some of its best football of the season. MSU, on the other hand, struggled in a 20-13 home win over middle-of-pack Idaho, but that win did eliminate the Grizzlies’ Big Sky title chances.

“I think (Montana) coach (Bobby) Hauck and the rest of the coaches did a great job this week getting us laser focused for this game and cancelling out all of next week,” Lewis said. “I think this week of preparation was probably one of the better ones we’ve had this year, so it was cool to see.”

Hauck chalked up his team’s ability to be locked in on this week’s game to discipline, something he feels his team has in droves. Disciplined would also be one way to describe Montana’s suffocating defense, which played with effort and physicality.

The Griz allowed 155 yards, the second fewest given up this year, on 65 plays for an average of 2.4 yards per play. The Lumberjacks used two quarterbacks, who are similar in style, so it didn’t present a difference in preparation for UM. Northern Arizona’s longest plays were a 26-yard pass and a 25-yard run on a fake punt.

Earlier in the year, Montana’s defense went 164 minutes, 57 seconds across the first three games without allowing points. The Griz offense gave up a pick-6 in that stretch, making the two scoreless stretches 82:39 and 82:18.

“We have a good defense,” Bobby Hauck said. “I think that’s pretty well documented, and certainly today was a good performance. It’s comfortable in my position to know your defense is going to get stops. Great job by them. Great effort. Just well coached, well played. It was good. It was physical. Tackled well.”

On Saturday, it was a special teams error that ended Montana’s scoreless streak. True freshman Aaron Fontes fumbled a punt for the third straight game, giving NAU a short field, which it converted into a 43-yard field goal by Luis Aguilar with 12:34 left in the third quarter.

That was one of two turnovers committed by UM, the other being Cam Humphrey getting intercepted. The Griz still finished with a 4-2 edge in turnovers as they intercepted three passes and recovered one fumble.

Corbin Walker had UM’s first interception when he picked off Cale Millen in the end zone in the third quarter. Northern Arizona had started that drive at the UM 24-yard line when Devontae Ingram returned an interception 56 yards.

In the fourth quarter, junior cornerback Justin Ford intercepted a pass for the eighth consecutive game as he picked off Niko Haen. Sophomore safety Garrett Graves added a 25-yard pick-6 later off Haen later in the quarter to cap the scoring at 30-3.

The fumble forced by Robby Hauck led to a redemptive touchdown for O’Connell. He had returned a fumble for a touchdown against Cal Poly on Sept. 25, only to have it called back.

“I feel like that mentality is instilled into us from day one: we love to be out there playing, knocking heads around,” Lewis said. “That’s what we love to do and that’s what we’re here to do.”

While Montana’s defense was lights out in the first half, it was still a two-score game to start the second half with the Griz holding a 13-0 lead. They finished with 427 yards but scored just one offensive touchdown, an 8-yard run by Isiah Childs, to go with three field goals by Kevin Macias from 27, 49 and 24 yards.

The Griz were missing one starter on each side of the ball. They started true freshman Brandon Casey at right tackle in place of senior Dylan Cook for the second straight week. They also had true freshman Noah Kaschmitter rotating at nose tackle with Alex Gubner after Eli Alford got injured last week.

“I thought first glance he did a nice job,” Hauck said of Kaschmitter. “It was good to see him get in the game and do some good things. Certainly, we have had to do a lot of that with young guys plugging in. It’s a glimpse into the future, and any time they can hold up and do a couple good things, it gives you hope for the future.”

The Grizzlies visited Northern Arizona. Here's what you may have missed from the tenth week of their season.

Montana is 10 games into the season but is still trying to find some offensive consistency.