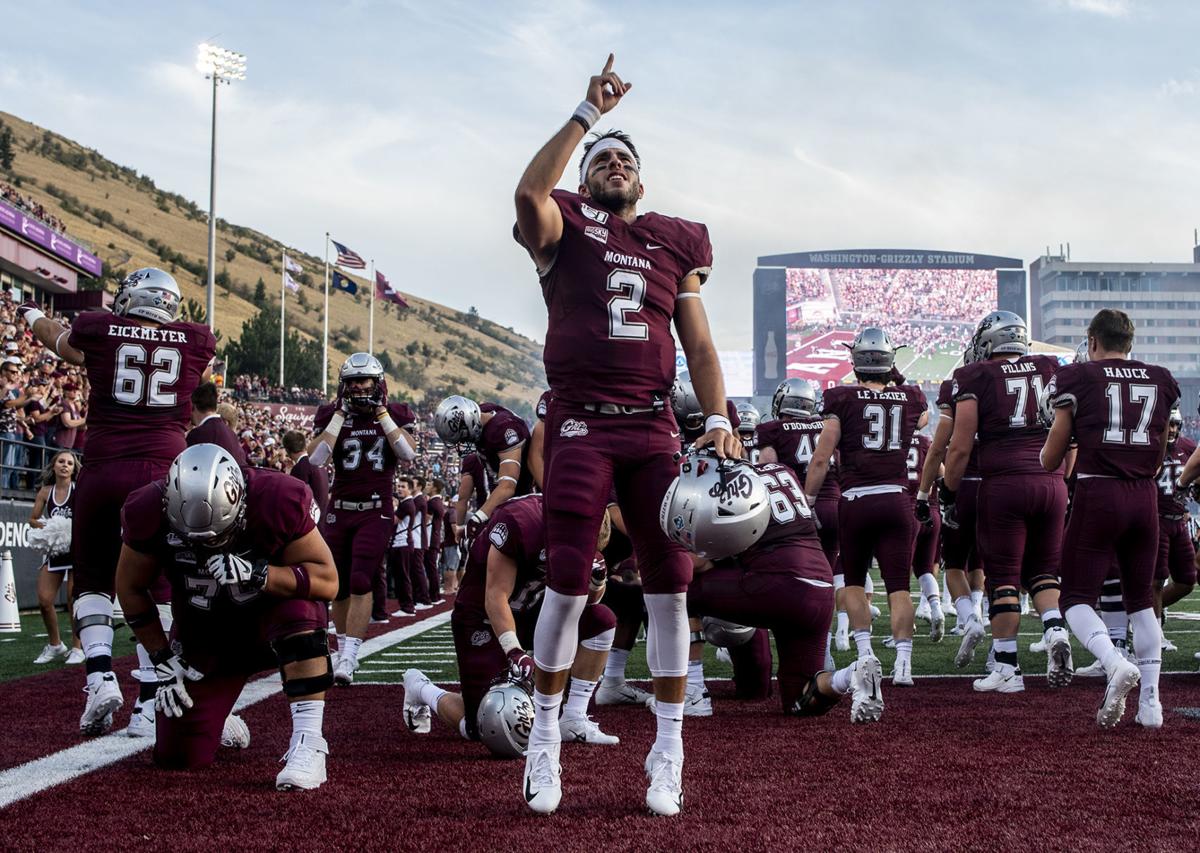 Montana quarterback Cam Humphrey (2) points to the sky after praying before the Grizzlies' 2019 home opener against North Alabama at Washington-Grizzly Stadium. 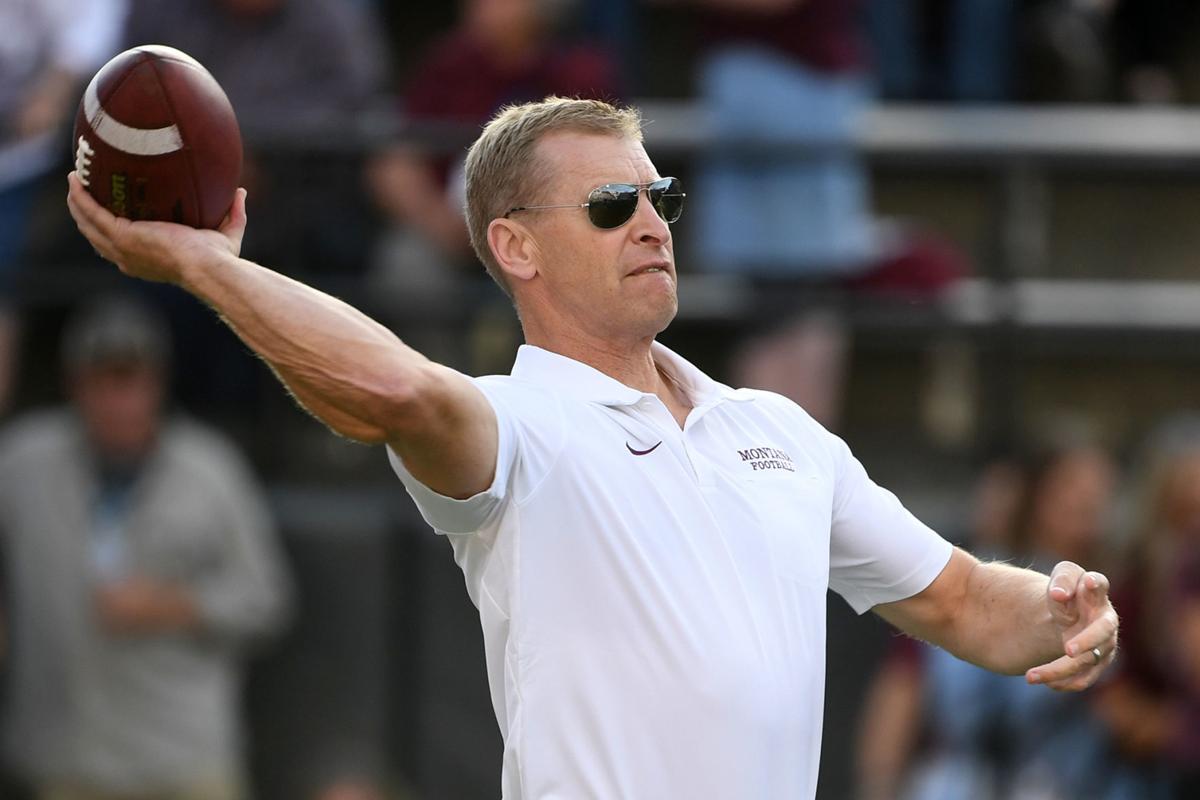 Montana head coach Bobby Hauck warms up with the team prior to the 2019 home opener. The Griz went 7-0 at home, picking up their first playoff win in Missoula since 2015.

Montana quarterback Cam Humphrey (2) points to the sky after praying before the Grizzlies' 2019 home opener against North Alabama at Washington-Grizzly Stadium.

Montana head coach Bobby Hauck warms up with the team prior to the 2019 home opener. The Griz went 7-0 at home, picking up their first playoff win in Missoula since 2015.

MISSOULA — From frustrating to futile, from flaming out to fumble follies, the Montana Grizzlies spent the past decade largely floundering. They experienced NCAA violations, a sex assault scandal, the first losing season since 1985, a revolving door of coaches and an infamous loss to Montana State in 2018.

But the return of head coach Bobby Hauck appears to have the once-dominant program back on the path to being a fixture on the national stage. In working toward the Hauck-termed "Return To Dominance," the Griz were more sizzle than fizzle in 2019, restoring a key element that had been missing in recent seasons: The fun factor.

Game days in 2019 were more so filled with optimism and excitement rather than dread or doubt. The winning product is the main reason why, but the flashy, high-flying offense lends to the edge-of-your seat feeling where the Griz could light up the scoreboard at any moment with point totals shooting sky high like Mount Sentinel.

In fact, the Grizzlies’ three outings of 50-plus points were the most in a single season by a Hauck-led Griz team in his nine years at UM. The 73, 61 and 59 points were three of the top four marks by his teams in 122 games.

Who would've thought Hauck would coach a team that broke school records for pass completions, pass attempts and passing first downs? His previous tenure was filled with the ground-and-pound style termed “Bobby Ball,” but the Big Timber native has evolved with the times, where offense is now the name of the game and defensive skirmishes have been lessened.

What hasn’t disappeared from Griz football under Hauck is the ferocious, physical defense. It’s a hard-hitting style welcomed by Montanans who consider themselves tough and gritty, gutting out long winters with an eye toward the beautiful summers in the Treasure State.

There also now appears to be light at the end of the road for Montana with Hauck back at the helm trying to reproduce a fear-inducing team that flattens its opponents.

The Griz expedited that process thanks in part to their 17 seniors who were recruited by three coaches but bought into Hauck’s vision, setting an example for the younger players. But they lose key pieces in quarterback Dalton Sneed, linebacker Dante Olson, wide receiver Jerry Louie-McGee, defensive tackle Jesse Sims, safety Josh Sandry and several others.

“We’re sad to see our senior class go,” Hauck said, “but I’m excited about moving forward with the next group and continuing to build our football team and our football program back into a team that’s to be reckoned with each and every fall.”

Montana certainly has some pieces in place to be able to carry forward the momentum generated in 2019. They return six All-Americans and six All-Big Sky players, including resurgent receiver Samori Toure, breakout running back Marcus Knight, hard-hitting safety Robby Hauck and overshadowed linebacker Jace Lewis, among others. Montana should also be reinvigorated by the return of injured players like Sammy Akem, Gabe Sulser and others.

Even with the success in 2019, the Griz were far from flawless. They struggled in the trenches in blowout losses and collapsed in usually sound areas in the quarterfinals, seeing their season end further than most thought because of a tough schedule but simultaneously earlier than expected because they had already whipped Weber State once before losing 17-10 in the rematch. In fact, that loss was just the second time in nine seasons that a Hauck-led Griz team gave up 17 or fewer points and lost; they fell 16-6 at Montana State in 2005.

“I think there was probably more out there,” Hauck said, “but that’s football: you win ‘em or you lose ‘em. If you don’t play well, you get knocked out. That’s the way it is. I’m excited about what we accomplished this fall. I think we’re ahead of schedule, as I’ve mentioned. I’m also excited about moving forward.”

The Griz are still working toward flexing their muscles more and leaving the opposition floundering. A good place to start would be snapping a not-so-fun four-game losing streak to Montana State. The latest one was a 34-point loss that tied the worst defeat by point differential for a Hauck-coached Griz team regardless of if it was an FCS or FBS opponent.

Then there’s still the absence of a Big Sky championship since 2009 — the 2011 title was vacated, as was that postseason run, leaving them with a 3-4 record in the playoffs this decade.

The tide started to turn in 2019. The Griz secured their first 10-win season since 2013, won their first playoff game since 2015 and were a scary team when things were clicking.

The question going forward is can the Griz parlay the success in 2019 into a fruitful decade of flourishing and fun. With Hauck leading the way and possibly on board for the long haul — he already tried the FBS trek once with sub-optimal results — Montana may soon reassert itself as a perennial contender after a decade wandering the wilderness.

Montana football: A way-too-early preview of the Grizzlies' 2020 schedule

It's 2020, so why not take a way-too-early look at the Montana Grizzlies' football schedule for this year. #GrizFB