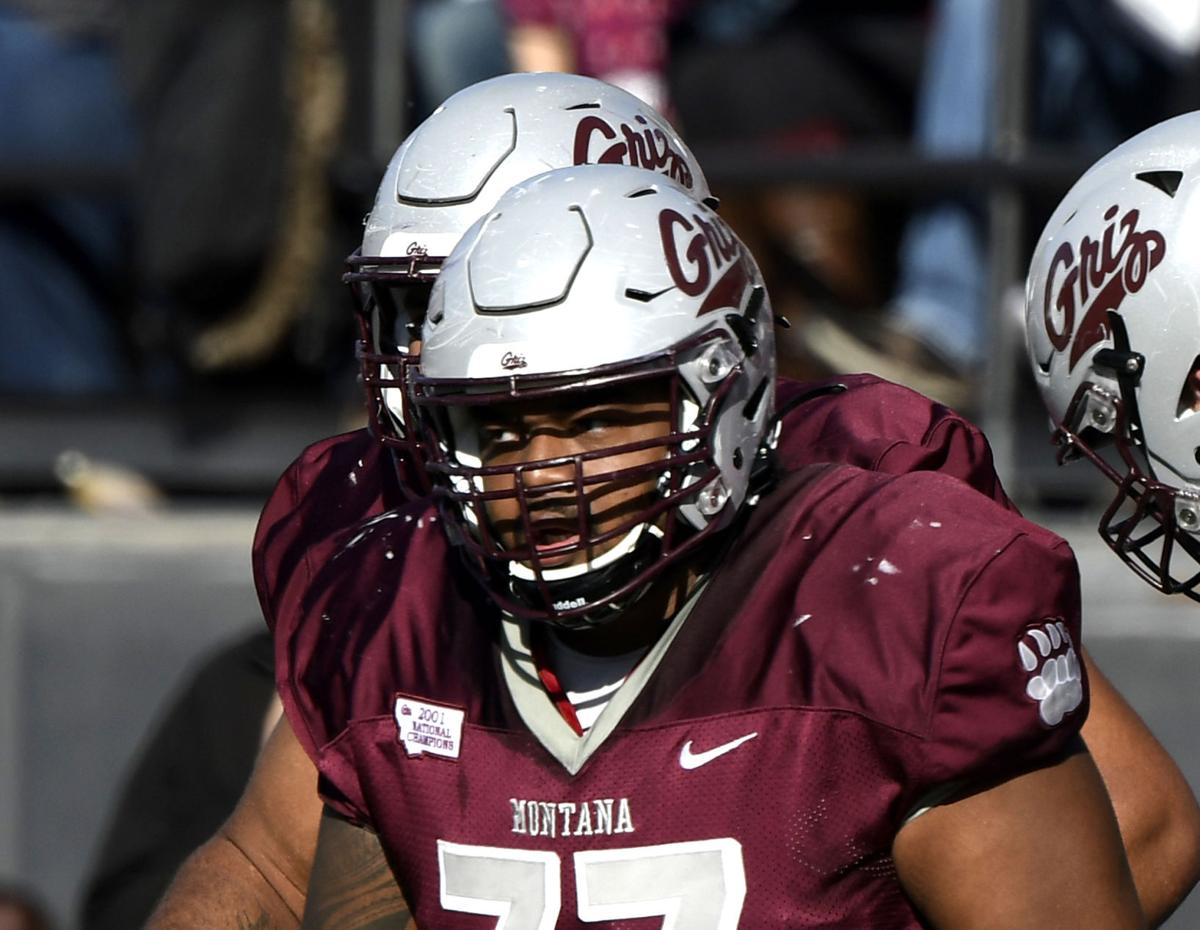 Montana senior right guard Moses Mallory protects quarterback Kris Brown during last Saturday's game against Sacramento State. Mallory, who transferred to UM in 2019, is in his second season as a starter. 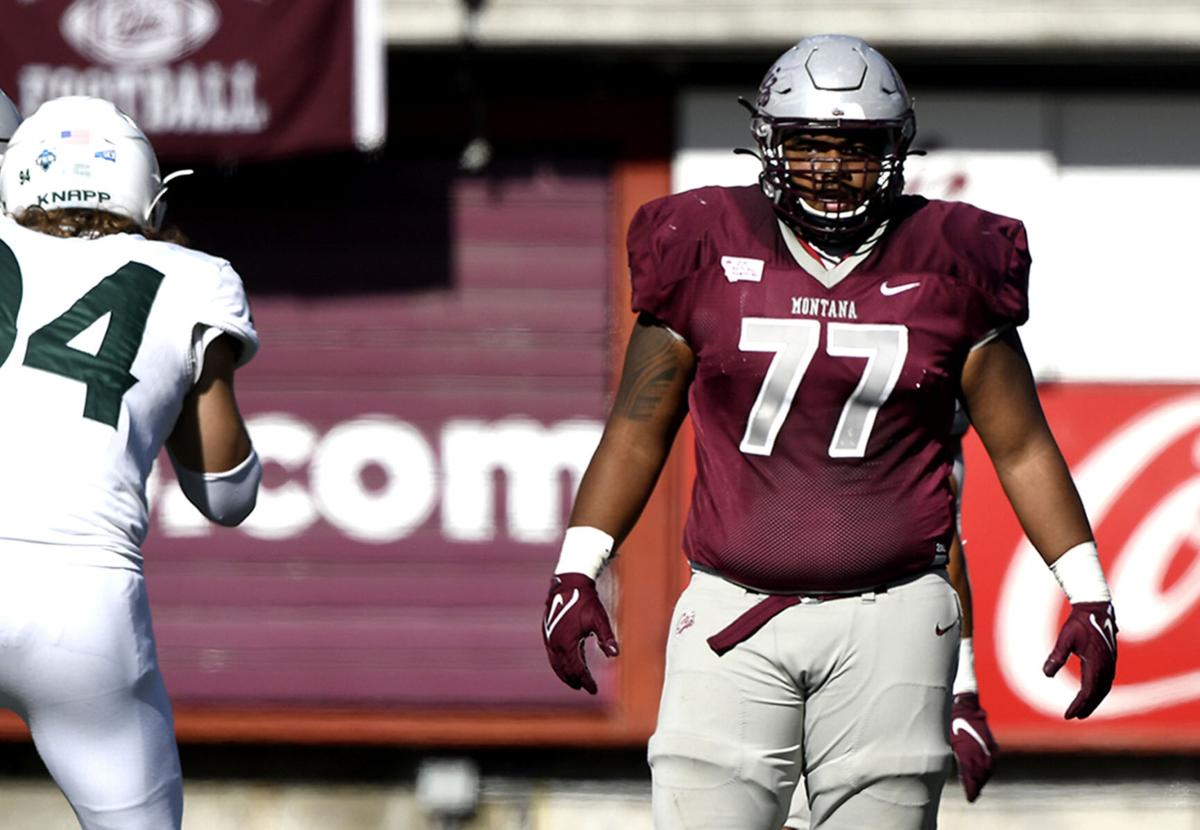 Montana senior right guard Moses Mallory lines up for a snap against Sacramento State last Saturday. Mallory began his college career at Dixie State, then a Division II team, before he dropped down to the junior college ranks at Eastern Arizona College. 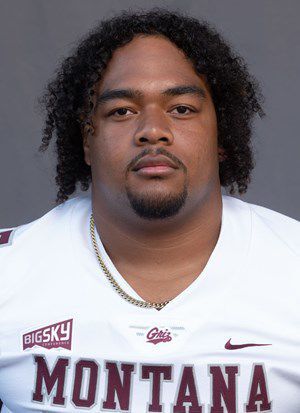 Montana senior right guard Moses Mallory protects quarterback Kris Brown during last Saturday's game against Sacramento State. Mallory, who transferred to UM in 2019, is in his second season as a starter.

Montana senior right guard Moses Mallory lines up for a snap against Sacramento State last Saturday. Mallory began his college career at Dixie State, then a Division II team, before he dropped down to the junior college ranks at Eastern Arizona College.

MISSOULA — Moses Mallory looks at two things every time he’s leaving his room: a picture of his family and his list of goals.

“It’s right by my door, so when I turn off my light, I have to see it,” the Montana senior offensive lineman said.

The picture includes Mallory, his older brother and his mother. Family means everything to him. It’s an important aspect of growing up in a Samoan household, just like respect, hard work and discipline, all factors that have helped him become an NCAA Division I football player.

Family is especially meaningful to Mallory because he was raised by a single mother. She’s the most important person in his life. He refers to her as a superwoman. He even has a tattoo of her name, Painuulasi Redmond, on his heart.

Mallory lost his father at a young age due to a brain tumor, he said, so his mother worked two jobs to raise two sons. She tried to provide them everything they needed.

He and his brother didn’t always have the newest and coolest shoes or gaming consoles like other kids. Mallory didn’t even get his first cell phone until he was in college.

“She’s still working two jobs, which it’s sad to see, it gets me emotional,” he said, taking a second to wipe his eyes. “That’s why I’m working so hard to get an opportunity to hopefully change our lives.”

Mallory wants to give back to his mother after she gave him so much. She still does by bringing food when she comes to home football games and offering to clean his room or do his laundry.

That desire to give back is what’s driven him over the years. That’s why his list of handwritten goals has hung in his room throughout stops at three different colleges.

The list includes short-term goals like his grade-point average, weight room numbers and body weight. There are also team goals, like winning the Big Sky and FCS titles.

Then there’s the goal that’s about his mom as much as it’s about him.

“One of the last ones right now is get an opportunity in the NFL,” he said, “because I want to be able to buy my mom a house. That would be awesome.”

Mallory’s journey to Montana took quite a few detours.

He started out growing up in Kansas City. It was a rough area where he recalls seeing drug dealings and shootings as a young kid. How he handled daily life echoed his Samoan upbringing.

“In the Samoan culture, we’re big on respect. I’m going to respect you until you disrespect me,” he said. “I feel like that’s how it was around where I grew up and had to see that in person. It made you have to grow up and be a man at an early age. You don’t have to be old to be a man.”

As his mother tried to play the role of both mother and father, Mallory was grateful to have his brother around. It’s almost like a best friend relationship with his brother Martavius Redmond, who’s five years older and spent one season on the Southern Utah football team.

“I was always the chubby kid, so other kids would pick on me, but he’d always have my back, he’d always be there,” Mallory recalled. “We got into some trouble sometimes, but he always had my back, so I’ll always have his.”

When he was in middle school, his family moved to Utah. Wherever they lived, they kept their Samoan traditions and culture. He felt those helped him excel in the athletic arena.

Mallory played three seasons of varsity football and earned all-state honors while at Herriman High School in Herriman, Utah. He also played rugby, and despite his size, he was fast enough to run on the track team’s 4x100 relay.

“Samoan culture is big, and I’d say it helped me get to where I am,” he said. “We’re all big about respect. We’re all about hard work. It definitely taught me about discipline.”

Mallory began college at Dixie State, which was then a Division II school. He tore the MCL in one of his knees after just two games and received a medical redshirt. Not long after that he was gone.

“I’ve been doubted my whole career,” he said. “But I always knew deep down, if you work hard enough, nobody can deny you.”

The pendulum swung high when Mallory received a Division I scholarship to play in the Big 12 at West Virginia. However, he had his scholarship pulled when WVU underwent a coaching change.

Instead of feeling sorry for himself, Mallory went to social media. He sent his film to nearly every Division I coach in the country. He heard back from about 50 teams and chose the Griz.

“He’s a good person, he cares about others, and he places the team above himself certainly,” Montana coach Bobby Hauck said. “All the things that you would want out of a person, a dude, a friend, a football player, he personifies a lot of those things.”

Mallory had a rude awakening during the first week of fall camp at UM in 2019.

He came in overweight and out of shape at 385 pounds. The summer heat added to the grueling practices and he started to get cramps again. But those cramps felt different this time. He was having a heat stroke and didn’t know it.

“All of a sudden, my body just started full body cramping and I just blacked out for a little bit. But it’s alright. I was alright. At least it showed I was working hard even though I was tired,” he said, trying to laugh off the scary situation.

Mallory invested time in his body. Chugging two to three gallons of water every day became the norm. He worked out more and focused more on conditioning instead of just lifting weights.

He also changed his diet. It was one of the more challenging aspects because food is a big part of the Samoan culture, and he loved to eat. His favorite is luau, a mixture of corned beef, onions and coconut milk baked in taro leaves.

“I’ve learned that I can do anything I can put my mind to,” he said. “I was always told if you’re willing to put in the extra work that other people aren’t, you have more of a chance of achieving your dreams.”

Mallory’s persistence and mental toughness shined through as he lost nearly 65 pounds. His gains in fitness, strength and football knowledge helped him start 12 games in 2019. This year, he was rotating with Colton Keintz at right guard before being thrust into a full-time starting role when Keintz retired.

“I think Mo certainly sees the value in our process,” Hauck said. “Just because from where he started when he walked in the door to where he is now, he’s like two different guys.”

Mallory notices that too, and not just in his body composition. While he’s still not the loudest guy on the team, he’s tried to earn the respect of his teammates and coaches by treating them with respect and working hard.

He’s an engaging guy with a warm smile, which can be seen during one-on-one interactions or while watching him sing George Michael’s “Careless Whisper” on the video board during home games.

Mallory is hoping to one day put an even bigger smile on his mother’s face by making it to the NFL. He was highlighted by NFL Draft Diamonds last summer but decided to return to college for another season.

Mallory is getting his degree in criminology. He’d like to go into law enforcement after football, particularly being an FBI agent. He could also see himself involved with real estate or an entrepreneurial business.

At least he knows he’ll have options as he tries to tackle all the goals on his ever-evolving list.

“It’s taken a lot of sacrifice, not just by me but my mom and my brother, and a lot of hard work to get here,” he said. “But if it was easy to do, then everyone would do it. We’ve been through a lot, my family. Our story is pretty crazy. But it’ll all be worth it.”

Here are five key areas of the game to watch when Montana heads to Idaho this weekend trying to revive its season.