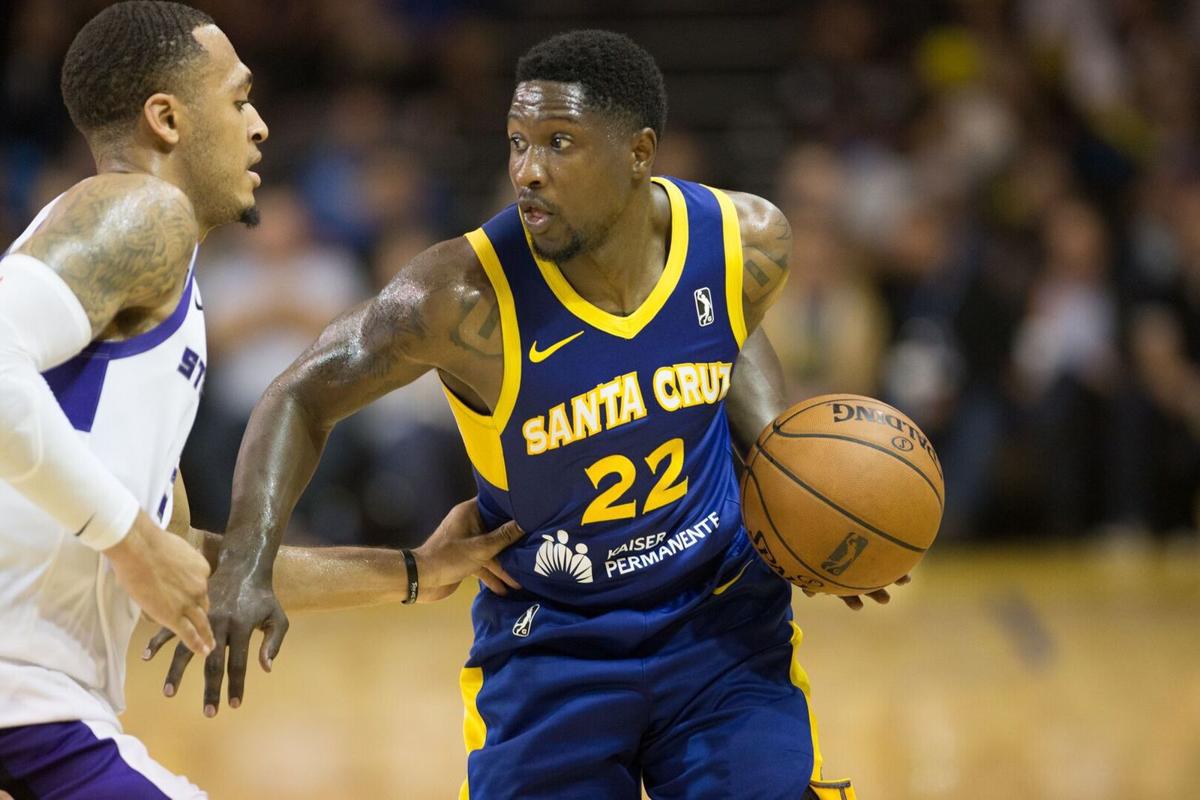 Former Montana Grizzly Will Cherry currently competes for the Santa Cruz Warriors, the G League affiliate for the Golden State Warriors, after spending a few years playing overseas. Cherry, an Oakland native, was a three-time first-team All-Big Sky selection and two-time conference defensive player of the year during his time with Montana. 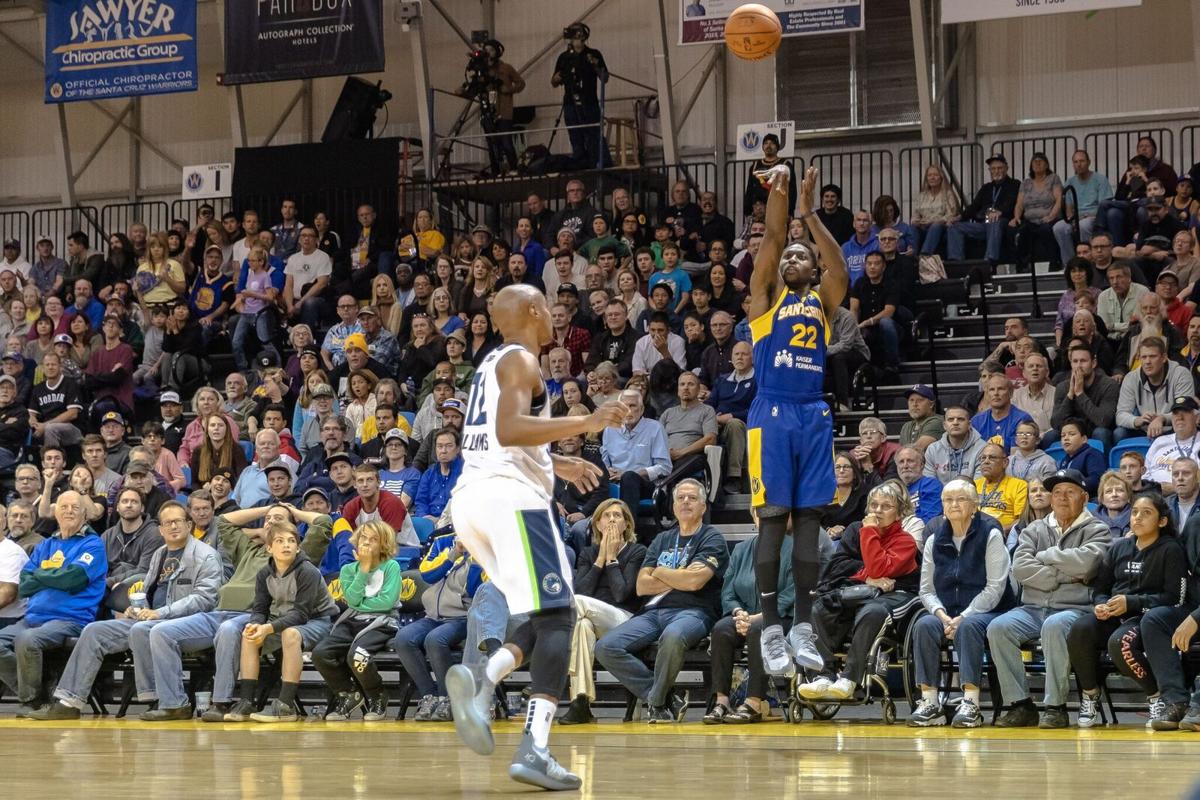 Former Montana Grizzly and current Santa Cruz Warrior Will Cherry shoots over a defender during a G League game earlier this season.

Former Montana Grizzly Will Cherry currently competes for the Santa Cruz Warriors, the G League affiliate for the Golden State Warriors, after spending a few years playing overseas. Cherry, an Oakland native, was a three-time first-team All-Big Sky selection and two-time conference defensive player of the year during his time with Montana.

Former Montana Grizzly and current Santa Cruz Warrior Will Cherry shoots over a defender during a G League game earlier this season.

MISSOULA – The grind never stops for Will Cherry.

The former Montana Grizzly basketball standout keeps taking one step closer toward making it back to the NBA, but his most recent move has some home-cooking involved.

Cherry, an Oakland native, signed with the Golden State Warriors organization back in September. He signed an Exhibit 10 contract which means he would earn the league minimum if he remained on the Warriors’ roster but it is not guaranteed. If he was released by Golden State, which he was, he could make up to $50,000 in bonuses for playing for the team’s G League affiliate.

“It feels good, man. It feels good,” Cherry said in a phone conversation with 406mtsports.com. “Been away for a couple years now so it’s been fun playing for the Santa Cruz Warriors.

“This was a perfect situation for me. I didn’t want to go to another city where it wasn’t the best situation, so being home was perfect for me.”

Santa Cruz is about an hour south of Oakland, so Cherry’s proximity to his family is perfect. He said getting a chance to represent his city meant a lot to him.

Not to mention suiting up as a member of the team he grew up rooting for as a kid.

“It’s the home team. A lot of people back home have a chance to come see me,” Cherry said. “Every night, with family and friends, our fans and crowd is the best in the G League. It’s something special.”

Being with the Warriors has had its eye-opening moments too. Having won three of the last four NBA titles, Cherry said being around Golden State’s players and personnel before he went to Santa Cruz showed him how an organization has a business-like mentality when they carry the highest possible expectations in the league.

However, those expectations don’t come with an uncomfortable intensity.

“You see how it’s totally different. It’s more relaxed and chill here,” Cherry said. “Here, it’s more family oriented as far as the environment. You go about your work in a fun way. It’s not always just serious. Coaches are more relaxed and they give the guys more freedom while they’re working hard. That was the one thing I took from it.

“You couldn’t ask for a better situation to be in.”

Cherry’s persistence in professional basketball is one to admire, especially for Grizzly players hoping to make a pro career out of basketball. After all of that time overseas, Cherry said coming back to the G-League and being close to home was one he couldn’t pass up.

“First day, people always ask what school you went to and I tell them Montana and they’re shocked because I went from California to Montana,” Cherry said with a laugh.

But boy did he thrive.

Cherry was a three-time first-team All-Big Sky player for the Grizzlies, including the two-time conference defensive player of the year. Cherry ranks eighth in career scoring for the Griz at 1,484 points and owns the school record for career steals with 265. He’s fifth all-time in assists as well with 397.

In 2013, Cherry’s senior year, the Grizzlies made it to the NCAA Tournament — his third appearance in the Big Dance — and drew eventual Final Four contestant Syracuse. That team — under Wayne Tinkle — marked the last time Montana made the tournament before UM did it in 2018.

“It meant a lot (to see them back in the tournament) and they should’ve beat Michigan. They had them on the ropes,” Cherry said, laughing again. “It felt good to see them back. I think they’ll make it back again this year as well.”

Playing overseas has made it difficult to get back to see the Griz play, something Cherry said he hasn’t done yet but hopes to this year. Cherry did come back to Missoula this summer where he worked out with current Griz assistant coach and good friend Jay Flores.

Cherry enjoys tracking Wayne Tinkle’s success at Oregon State as well as keeping track of his son, Tres Tinkle. He called Tres “his little bud” back when he was playing at UM, so seeing the numbers he’s put up for the Beavers has been special to Cherry.

During the 2014-2015 season, Cherry played in the then-D League — same thing as the G League just a different name — in the Cleveland Cavaliers organization. Cherry appeared in eight games for the Cavs that season.

From there he went to Lithuania, Germany, Turkey and most recently Croatia before coming back to the U.S.

Between his first stint in the G League to now, Cherry said the game has sped up while the sheer talent pool and athleticism in America dwarfs that in other countries.

And of course, the evolution of the 3-point shot courtesy of his parent organization.

“There’s a lot more threes now than when I was first in the G League,” Cherry said. “That’s definitely changed as well.”

Personally, Cherry said he’s had to embrace more of a leadership role this second time around in the G League, something he was an expert at during his time with the Griz.

Cherry said he also feels as if he’s grown up more. While college is a time for people to grow and find themselves, Cherry did that, but moving overseas forced him to grow and adjust even more.

“I had to grow up when I left Oakland, California and came to Missoula, Montana, but you have to grow up again when you’re a 22- or 23-year-old kid out of the country,” Cherry explained. “The language barrier is an adjustment and stuff like that, so it makes you grow up again and you have to figure stuff out all over again.

“It was a great experience. The hardest part is you feel like you’re missing out on life back at home. You learn to deal with it and just keep pushing through and remind yourself why you’re over there for the greater good and trying to do things for your career.”

Chasing his goals of professional basketball helped ease the strain of leaving the U.S. and missing friends and family.

But now that he’s back home, life couldn’t be better for Cherry. Not only is he representing his hometown team, he’s a father-to-be. He’s expecting his first child, a daughter who will be named Logan, here soon.

“I’ve got about eight weeks left of just being me,” he joked. “It’s a blessing man. I’m excited. I just can’t wait for her to come.”

“I think I’m more nervous about spending all of my money on a girl than having her wrapped around my finger,” he said.

And going forward, it's business as usual. Cherry said he aims to win a G League championship with the Santa Cruz Warriors and hopes someday he’ll get another chance at competing in the NBA again.