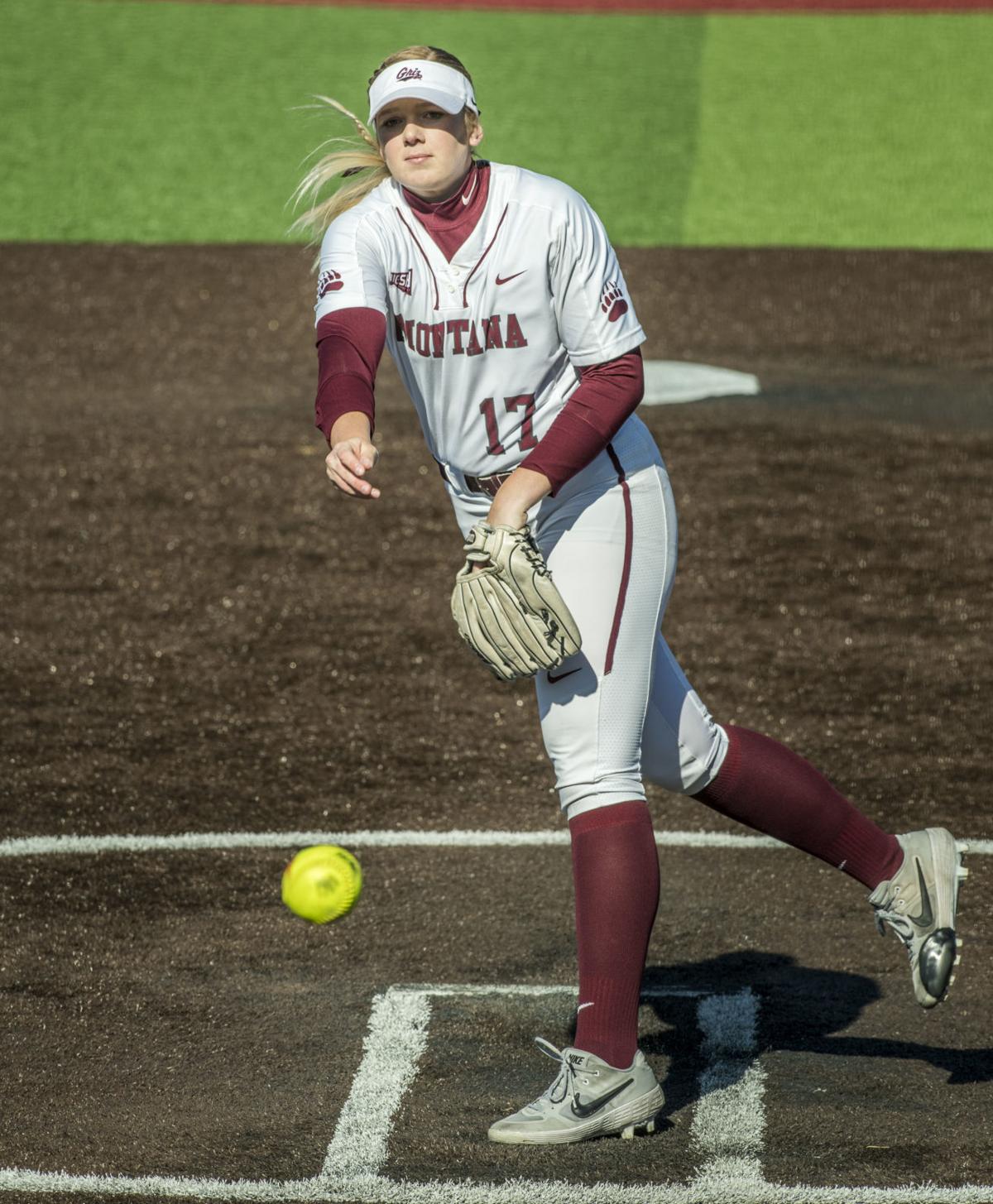 Montana senior Michaela Hood delivers a pitch during a game. Hood heads into her senior season trying to recapture the magic of her freshman year, when she helped pitch the Griz to the Big Sky Conference tournament championship and first NCAA tournament appearance. 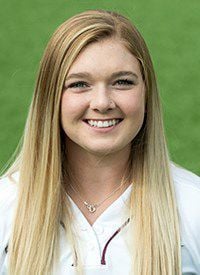 Montana senior Michaela Hood delivers a pitch during a game. Hood heads into her senior season trying to recapture the magic of her freshman year, when she helped pitch the Griz to the Big Sky Conference tournament championship and first NCAA tournament appearance.

MISSOULA — Montana Grizzly pitcher Michaela Hood was in a state of euphoria despite the exhaustion while celebrating with her team on the Weber State softball field in May 2017.

The now-senior had thrown 385 pitches in three days at the Big Sky Conference tournament to help lead Montana to its first NCAA tournament appearance. It was quite the accomplishment for Hood as a true freshman and for the Griz in just their third season of existence.

Hood was named the conference tournament MVP and was a first-team All-Big Sky selection. The future looked bright for the Las Vegas native.

“I had such a great team behind me, like I do now,” Hood said ahead of the season opener Friday. “I just felt so comfortable. I felt like I came in strong. That’s exactly how I feel this year.”

But injury hit as Hood was continuing her ascent. It derailed most of her sophomore season right as conference play was getting underway. She had to take time off from softball to let her pitching forearm heal. She didn’t even pick up a softball for months because it hurt to pitch.

The injury began to heal with time. No longer was the deterioration of her physical ability forefront on her mind heading into 2019. She worked to regain her previous form but was fighting a mental battle when the success didn’t come easy despite her desire to be great.

“I felt a little off because I hadn’t really been myself because of it most of my sophomore year,” Hood said. “I didn’t feel like I was a bad pitcher. I just felt like I wasn’t as good.”

Things began to click for Hood during this offseason after a chance meeting. She gambled with a slight yet impactful change and excelled during the fall. She began to feel reinvigorated. She felt like herself.

Now Hood is ready to try to regain the magic of her first year at Montana by going out with a bang in her final season, which begins Friday in Louisiana at the Louisiana Tech Big Easy Classic.

The light bulb went off in Hood’s head while listening to a former MLB pitcher speak at her church back home prior to her senior season. The mention about the importance of a pitcher prioritizing flexibility over bulky muscles in their arm struck a chord with her.

Hood isn’t sure who the pitcher is, but it didn’t matter too much because on some level, she had thought the same thing about her arm. It felt good to hear a former pro player say it, so she decided to test it out herself.

Hood decided to cut back on her time building muscle in the weight room, which she hadn’t done until college, pushing herself harder and harder. She instead focused on arm flexibility, doing exercises aimed at stretching and range of movement.

Hood joked she’s still buff but feels like her arm now has the flexibility she had during her freshman year. She led the Big Sky that year with 178 strikeouts in 190.2 innings, ranked second with a 2.31 ERA and collected the second-most wins with a record of 18-7 while hurling 16 complete games and five shutouts.

“I feel so much more comfortable,” Hood said. “I feel like I’m really going to dominate any batter that I face. There’s no batters that really scare me at the plate anymore.”

That wasn’t the case most of the past two seasons. Hood went just 8-15 with 139 strikeouts in 177.1 innings across her sophomore and junior years.

She began to find her groove in the fall after her offseason revelation. Hood threw a complete-game shutout against Providence, made two other starts totaling nine innings in which she gave up just three total runs and came on in relief twice, not allowing a run either time.

“I feel like my mentality kind of went back to relaxed and how I was freshman year,” Hood said. “I feel better on the mound. I feel like I am a pitcher. I was so cautious. Now I’m good.”

Head coach Melanie Meuchel liked what she saw out of Hood in the fall. The speed and movement Hood had lacked on her pitches since her injury were returning.

“She’s in a very good spot right now,” Meuchel said. “I’m excited to see her compete on the mound.”

Junior pitcher Tristin Achenbach, a Great Falls CMR grad who started at Conrad-Choteau and stepped up at times the past two seasons, was similarly impressed by Hood’s bounce-back in the fall.

“She’s pitching really well right now,” Achenbach said. “I know she’s excited to go out and compete against different opponents than our teammates. She’s looking really well with how she’s throwing it.”

As Hood’s renewed physical abilities began to shine through once again, even if it was against lower-level competition, so too did her confidence in herself. Also important to Hood was rediscovering her own belief that her teammates and coaches believed in her and saw her as a leader.

“I think I was just in my own head a little bit,” Hood said. “I was nervous. I was uncomfortable a little. I didn’t trust myself even though my teammates trusted me. But now I’m back into thinking, ‘I can do it. I’m good. I know it. I’m me.’”

Hood feels just as good about her team’s outlook as she does about her own.

The Griz return all eight starting position players and two starting pitchers. That’s why it irks Hood that the Griz were picked tied for third in the preseason conference poll with Portland State, behind first-place Weber State and second-place Sacramento State.

“As a team, we are doing phenomenally,” Hood said. “We are feeling so good right now. I don’t know, putting us in third place, I think that’s a mistake.”

The Griz do need pitchers to step up after graduating Maddy Stensby, who was a first-team all-conference player at the pitcher/utility position, and Colleen Driscoll, who was an all-conference honorable mention at pitcher.

They’ll go with a three-pitcher rotation this year. They return Hood and Achenbach, who ranked fifth in the Big Sky last year with a .271 opponent batting average. Ashley Ward, the 2019 Gatorade Nevada Softball Player of the Year, rounds out the staff.

The three of them can complement one another with each of them bringing different pitch selections, speeds, styles and deliveries. It’s not just Hood who impressed Meuchel in her return; Achenbach has shown her what she’s wanted to see.

“They are probably at their best currently that they’ve been mentally, physically,” Meuchel said. “They have shown just a lot of maturity and strength in what they can do. They’re pretty fun to watch. I’m looking forward to them really setting the tone for us defensively.”

The Griz bring back three all-conference players. Junior Cami Sellers was second team at first base and was the league’s newcomer of the year, putting together a team-best .374 batting average, a program-record 18-game hit streak and a league-best 31 extra-base hits. Junior catcher Jessica McAlister and sophomore third baseman Kylie Becker were both honorable mention.

Rounding out the infield, second baseman Lexi Knauss and shortstop Maygen McGrath were the only Griz to start all 56 games in 2019. Outfielders Brooklyn Weisgram, Anne Mari Petrino and Kylie Hayton are all back after starting 44 or more games.

“This group is probably the most determined team I’ve been on,” Hood said. “We’ve grown so much faster than any other team. It hasn’t taken us that long to get to know each other, get to know our strengths, weaknesses and how to play with each other. I think that’s really going to help us.”

The returning experience and continued growth helped the Griz outscore teams 156-3 in the fall as they carried over success from the second half of last season. They started 5-20 in a rebuilding year, closed 20-11 and won their final six conference games to finish 10-8 in league play to place third.

“Our returning group really set a tone early in the fall to be able to compete hard and pick up where we left off with who we were,” Meuchel said. “We showed a lot of growth over that course of time.”

The Griz start their season on the road again with 32 consecutive games away from Missoula. They don’t play at home until April 1, when they begin a stretch of 13 home games in 32 days.

The Big Sky Conference tournament is soon after that, starting May 6 at Weber State, where the Griz hope to be competing for a conference championship and a return to the NCAA tournament, where Hood would like to end her career, coming full circle.

“I want it bad this year because it’s my last year,” she said. “I want to come in with a ring and leave with a ring. That’s my mindset coming into this year.”