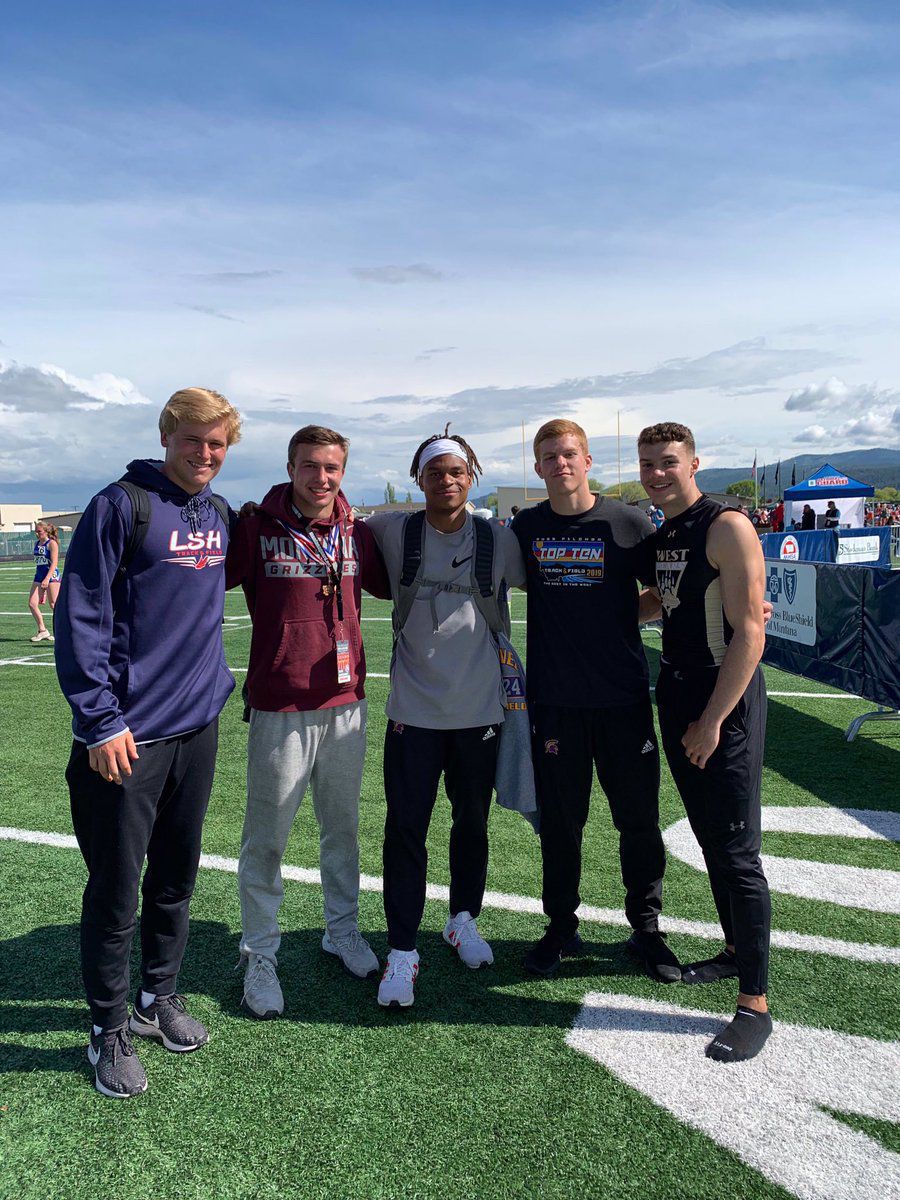 Future Montana Griz football players (L-R) Ryan Tirrell of Loyola, Ryder Meyer of Fairfield, Elias Dewaters of Sentinel, Jace DeWalt of Sentinel and Trevin Gradney of Billings West pose for a photo at the State AA and B track and field meet in Kalispell on Saturday. The five of them were just some of the high school athletes coming to the University of Montana this fall. 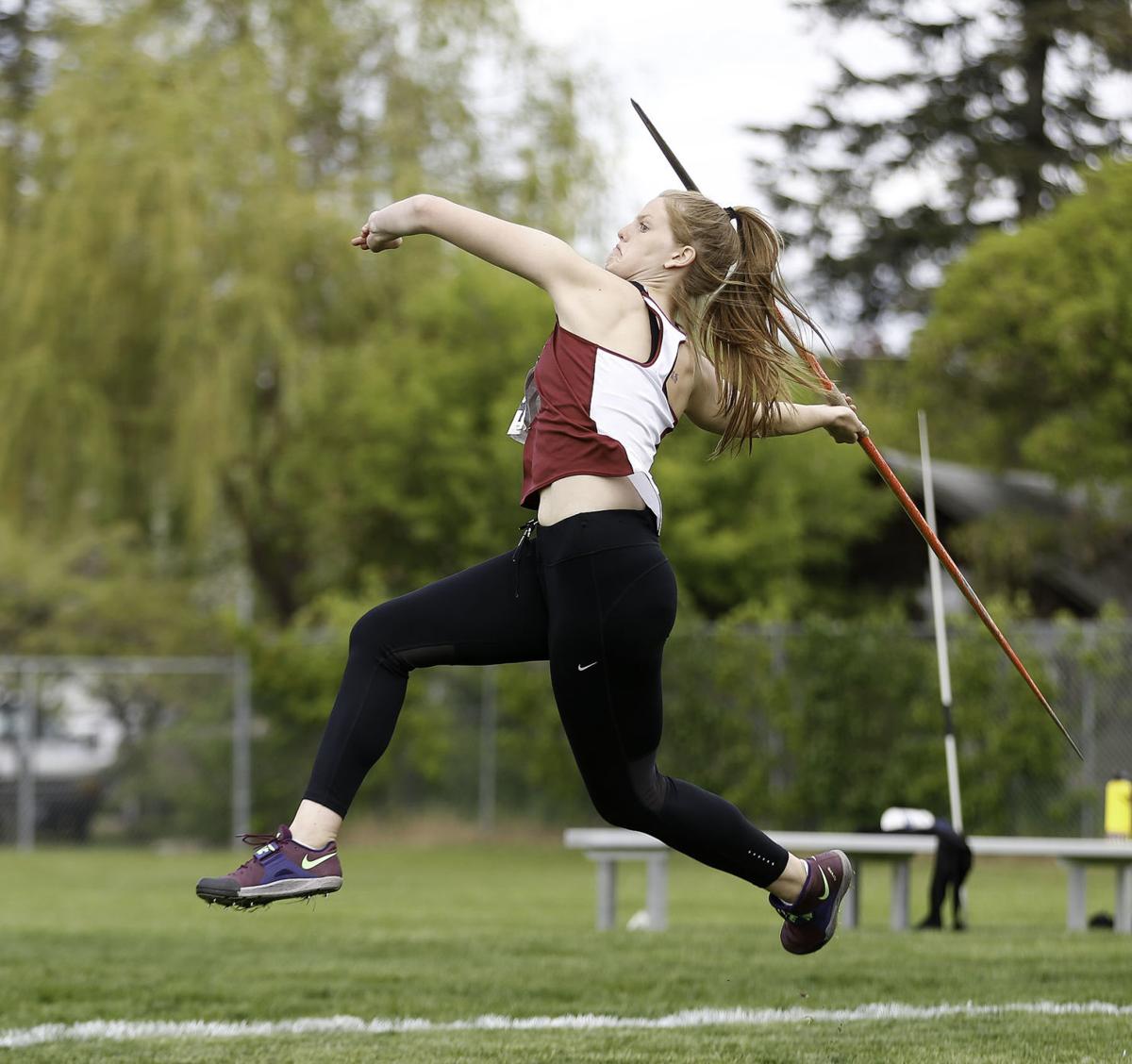 Helena High’s Jamie Pickens competes in the girls javelin at the State AA track & field meet on Friday at Legends Stadium in Kalispell. Pickens was named the Independent Record's Fame Athlete of the Year for a second straight season on Saturday.

Future Montana Griz football players (L-R) Ryan Tirrell of Loyola, Ryder Meyer of Fairfield, Elias Dewaters of Sentinel, Jace DeWalt of Sentinel and Trevin Gradney of Billings West pose for a photo at the State AA and B track and field meet in Kalispell on Saturday. The five of them were just some of the high school athletes coming to the University of Montana this fall.

Helena High’s Jamie Pickens competes in the girls javelin at the State AA track & field meet on Friday at Legends Stadium in Kalispell. Pickens was named the Independent Record's Fame Athlete of the Year for a second straight season on Saturday.

The Helena High senior showed her natural athletic ability and hard work by taking second place at the State AA track & field championships over the weekend in Kalispell. She added a ninth-place finish in the shot put in her lone season doing track and field in the spring after passing on softball, which she had played the three previous years.

Pickens’ performances, especially in the javelin, led Lady Griz coach Shannon Schweyen to tweet a congratulations to her that included the hashtag #bschweyencanthaveya, a reference to her husband, UM track and field coach Brian Schweyen, potentially trying to poach away the two-time Montana Gatorade girls basketball player of the year for his team.

Pickens was the lone in-state Lady Griz player in the 2019 recruiting class to compete at any of the MHSA state track and field meets. But several future Griz athletes from the state of Montana combined to win eight individual or relay titles, while others had podium finishes.

With the State AA and B meets both being held at the same location, five of the six in-state football players competing at state track were gathered in one location. Sentinel’s Elias Dewaters and Jace DeWalt, Billings West’s Trevin Gradney, Loyola’s Ryan Tirrell and Fairfield’s Ryder Meyer gathered for a photo after the meet with four state titles and 10 podium finishes between them.

Dewaters won two events at the State AA meet, taking first in the long jump and the triple jump with a personal-record mark in both. He ran the second leg of the 1,600-relay that placed ninth. Sentinel won the team title, its first since 1964.

Gradney was on the 400-relay and 1,600-relay teams that won State AA titles. He ran the final leg in the 1,600-relay to help West repeat, and he ran the third leg in the 400-relay. He was edged out in the 400-dash by Sentinel’s Jaden Foster and was the runner-up for the second year in a row. Gradney qualified but didn’t run in the 200 dash, an event he was ninth in as a junior.

DeWalt was a second-place finisher in the 300 hurdles and the 400-relay, of which he ran the third leg. He was on the 1,600-relay team with Dewaters that took ninth, running the third leg. He also placed 12th in the long jump.

Meyer competed in the short-distance races, placing fourth in the 100 dash and fifth in the 200 dash in State B. He had taken seventh in the 100 as a junior and didn’t compete in the 200.

At the State C meet, Great Falls Central senior Noah Ambuehl placed fourth in the shot put after winning it as a junior He didn’t compete in the discus throw at state this year after taking seventh last year.

Among football players coming from out of state, Cheney's Jacob McGourin finished fourth in the discus throw at Washington's 2A state meet. He was on the defending champion 400-relay team that placed first in prelims but was disqualified in the finals. Coeur d'Alene's Kale Edwards ran the second leg of the fifth-place 400-relay team and took 13th in the 400 dash at Idaho's 5A state meet.

Polson senior Bea Frissell repeated as the State A champion in the 1,600 and 3,200 runs. She broke the Class A record in the 3,200, which was set by former Belgrade runner Pipi Eitel in 2017. Frissell, who’ll be running in cross country and track for the Griz, also won two state titles in cross country.

Dillon senior Zane Johnson owned the State A jumps, repeating as the champ in the triple jump and winning the long jump. The future Griz track and field competitor ran the first leg of the 400-relay team that finished in third. He also took ninth in the pole vault after finishing fourth as a junior.

Glacier senior Evan Todd entered the State AA meet as the defending champ in the javelin and had the top distance this season. However, he was beaten out by future Montana State football player Rylan Ortt, a Sentinel senior, and ended up placing second in the event. He had taken sixth as a sophomore. Todd, who will compete on UM's track and field team, and Ortt are both tied for the sixth-best javelin toss in the country at 208 feet, 8 inches.

Frenchtown senior Jesse Mecham, a future UM track and field athlete, placed fifth in the shot put, his fourth top-10 finish to go with finishes of fifth, third and 10th. He took eighth in the discus throw, his second-best finish after taking 12th as a junior and seventh as a sophomore.

Editor's note: This is the third in a series honoring the 406mtsports.com girls and boys teams of the year, female and male athletes and overa…