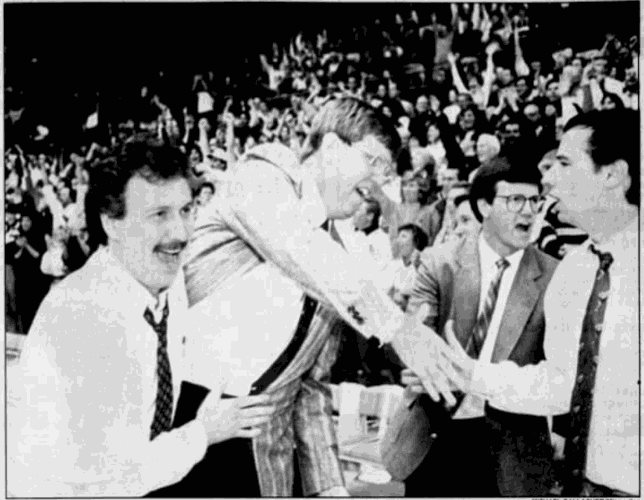 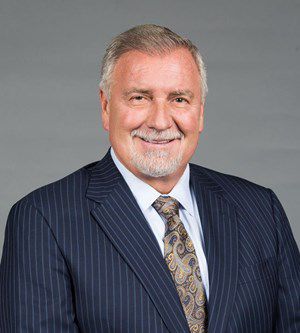 MISSOULA — Long before the Golden State Warriors were playing for their third NBA title in four years, before they rebranded their team at the start of the decade and before they drafted a sharpshooting guard out of Davidson, two Montana basketball coaches came up with a golden idea.

Stew Morrill and Blaine Taylor scribbled potential plays wherever they were when they started coaching together at Montana in 1986. They used a chalkboard at their office or put down ideas for plays on napkins at a restaurant, a bar or a bowling alley, sometimes joined by Lady Griz coach Robin Selvig, other assistants and players.

During one of those sessions, they came up with a play that was key in Montana ending a 16-year championship drought. The play has been called one of the most stolen plays and is still being used over 30 years later, including by the world champion Golden State Warriors.

“To say there were hundreds of teams that used it, it’d be accurate,” Morrill told 406mtsports.com in a phone call. “High school teams during their seasons ran it. I saw AAU teams run it when I was at Utah State. Obviously college teams, and it made its way into the pros. It was a real compliment to our system.”

A recent Wall Street Journal article titled, “The Secret History of the Golden State Warriors’ Unstoppable Play,” highlighted the play and traced its history from Montana to Colorado State to Utah State to BYU to Iowa State and finally to Golden State.

In the play, two guards run past each other under the basket. One runs to the wing to catch a pass and the other sets a back screen near the free-throw line, allowing a forward to cut down the lane for the pass and an uncontested layup.

“In some senses, it’s a fairly simple action, and in other senses, it was quite inventive at the time,” Taylor said in a phone call with 406mtsports.com. “The thing that’s remarkable about it is we’re still talking about it and it stood the test of time.”

When Morrill took over head coaching duties at Montana in 1986, the Griz hadn’t won a Big Sky Conference title since Jud Heathcote coached the team to the 1975 championship.

Morrill, who played at Gonzaga, brought in Blaine Taylor from Loyola Sacred Heart to serve as his assistant, creating an X’s and O’s duo. Taylor had played for Mike Montgomery at Montana when Morrill was a Montgomery assistant.

Before that 1986 season, they were exposed to a system of stagnant, stationary post players when there was no shot clock. But with big men like Larry Krystkowiak and Wayne Tinkle coming through the program, the option to make forwards more mobile was a possibility.

“It was a formative time for Stew because he was early enough in his head coaching time that he had been exposed to a lot of stuff, but he wasn’t exactly set in his ways,” Taylor said. “He was putting his own plan together. Stew saw it through the eyes of a big player, too, because he was big.”

Neither man could pinpoint when exactly they drew up the play that they called “Dribble Enter X” — “Dribble” for short.

But they had worked out enough kinks by the 1990-91 season to make the play effective, doing so by moving the post with misdirection and a hard screen. They were able to run the play from both the right and left sides.

Unlike the Warriors, who spread the floor more and put their forward near the top of the key, the Griz kept their forward just below the free-throw line. They had started the play with a double stack but adapted to a single screener when the paint got too congested.

“You have to have the timing right on the pass, the screen and the cuts,” Morrill said. “It’s not an automatic that you run ‘Dribble’ and get a layup. It was about an 80 percent play if you used it correctly and didn’t over-run it.”

During the 1990-91 season, forwards Kevin Kearney, the Big Sky MVP, and Daren Engellant of Geraldine routinely found themselves with easy layups on the play.

“I remember it was a big part of that tournament and that championship,” Morrill said. “I can still see Kevin and Daren getting rich off of that play during that season.”

Delvon Anderson, the Big Sky Newcomer of the Year, and Roger Fasting of Glendive were the main screeners, playing the role that Stephen Curry does with the Warriors.

“When we signed Delvon, he was 185, 190 pounds, but by his senior year he weighed 210, 215,” Taylor said. “We’d set that cross screen and Delvon was a real bulldozer. You had to time it perfectly and have a guy who’s strong enough, bulky enough and determined enough to lay some meat on somebody.”

With a strong regular season, the Griz earned the right to host the conference tournament in Missoula. They made the title game, where they faced two-time defending champion Idaho, a team they had lost to by 10 points two weeks earlier.

This time, they pulled out a 76-68 victory on March 9, 1991, for their first tournament title after coming up empty in five attempts. Kearney posted 20 points and eight rebounds, and Engellant added 17 points and six blocks, leading the team that was down to seven players because of injuries.

“With Stew being as big as he was, I remember in that championship game crouching, trying to feverishly call 'Dribble Enter X,' which I called with my arms crossed and both hands bobbing up and down like you’re dribbling,” Taylor said. “We ran that play repeatedly down the stretch of that game to score pivotal baskets.”

The Missoulian ran four articles or columns about the game in the next day’s paper. None of them mentioned or alluded to the unique play.

The Griz lost their next game, 99-65 against Jerry Tarkanian’s undefeated UNLV team in the NCAA tournament. They also lost the coach who had led them back to the top.

Morrill departed for Colorado State after the championship season. Of course he took the signature play with him.

He estimated his teams throughout the years ran 100 man-to-man plays each season in addition to zone plays. He kept a maximum of 25 man-to-man plays active at a time, and “Dribble” was a mainstay, although other plays were more effective, he said.

“I have a good memory of that game because we were down 16 with four minutes to go and came back and won and ‘Dribble’ was the play that got us the basket at the end of the game to win,” Morrill said. “I’m guessing there’s probably been four or five game winners at Montana, Colorado State and Utah State from the play ‘Dribble.’”

The play remained a staple when he moved from the Western Athletic Conference in 1998 to coach Utah State in the Big West Conference. He remained there for 17 years, but opposing teams out West had caught onto the play even before then.

He disguised his play calls with a variety of deceptive cards, using photos or two colors of ink. He'd save "Dribble" for the second half of conference games when the offense was on his end of the court so the opposing coach couldn’t identify it and alert the defense as easily. Sometimes he'd wait for specific defenders to come into the game to run that play against.

He also had to defend the play when teams would run it against him.

Standing the test of time

Taylor assumed head coaching duties at Montana when Morrill departed. He led the Griz to a second consecutive title and one more championship before he left to be an assistant under Montgomery at Stanford in 1998.

Three years later, he became the head coach at Old Dominion and introduced the play to the Colonial Athletic Association and the East Coast. He called the play “Quick” because “we really wanted to hit people quick.”

“We’re watching television in the NCAA tournament and one our league teams is running our ‘Quick’ action, which is ‘Dribble,’ on national TV, and they scored five layups on Wake Forest,” Taylor recalled. “That almost makes you mad, but it’s quite a compliment when somebody steals your action and it works for them.”

UC Irvine, where Taylor completed his second season as an assistant, occasionally runs the play.

As Ben Cohen broke down the history of the play in The Wall Street Journal article, Golden State head coach Steve Kerr added the play to his library when he saw Iowa State run it while calling one of the Cyclones’ NCAA tournament games. The Warriors call the play “Cyclone” because they had stolen it from them.

Iowa State only ran the play because then-head coach Fred Hoiberg lifted the play from BYU while scouting the Cougars in 2012 and 2013. His team called the play “Cougar” to recognize who they had taken it from.

“You have to have enough courage to try new things,” said Morrill, who retired in 2015 after 29 years and 620 wins as a head coach. “Some guys want to just run plays they’ve seen work for other people.

“I always loved drawing up stuff nobody had run before and let’s see if it works. That was part of the fun of coaching. I miss that to this day — the challenge of trying to create new offense.”

Josh Huestis is back in the NBA.