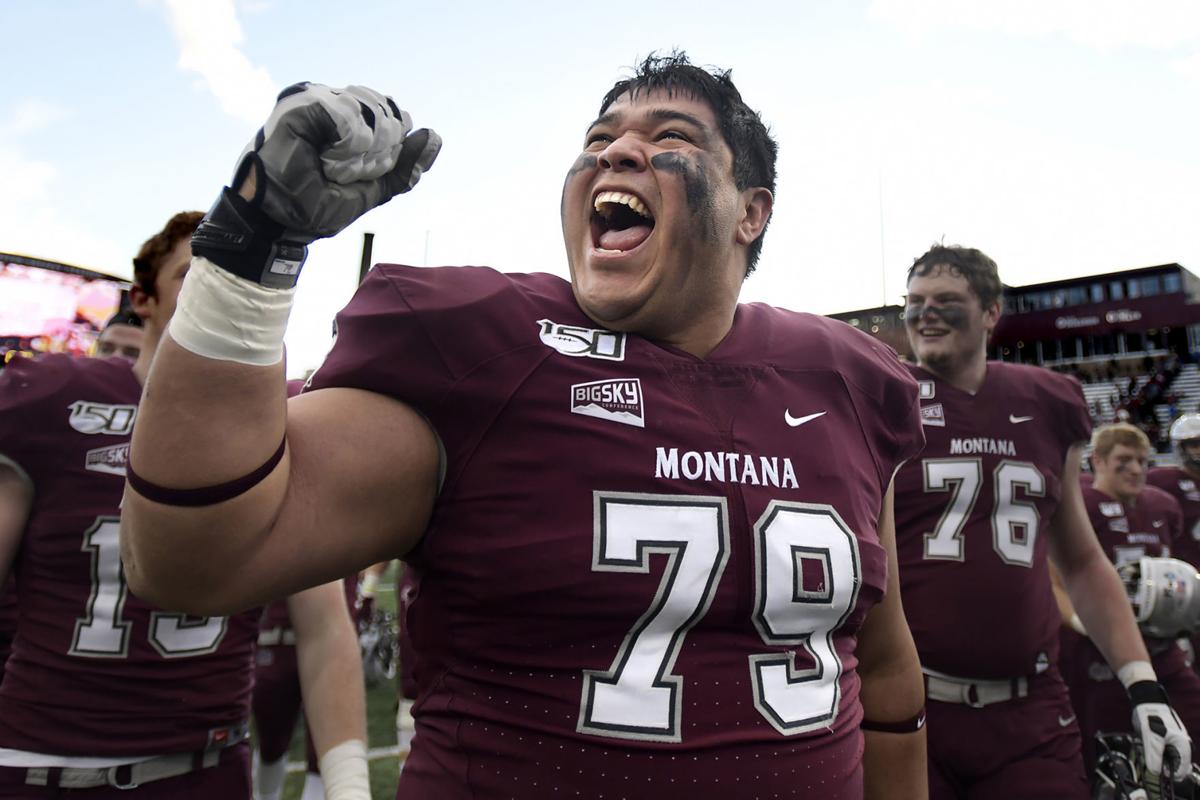 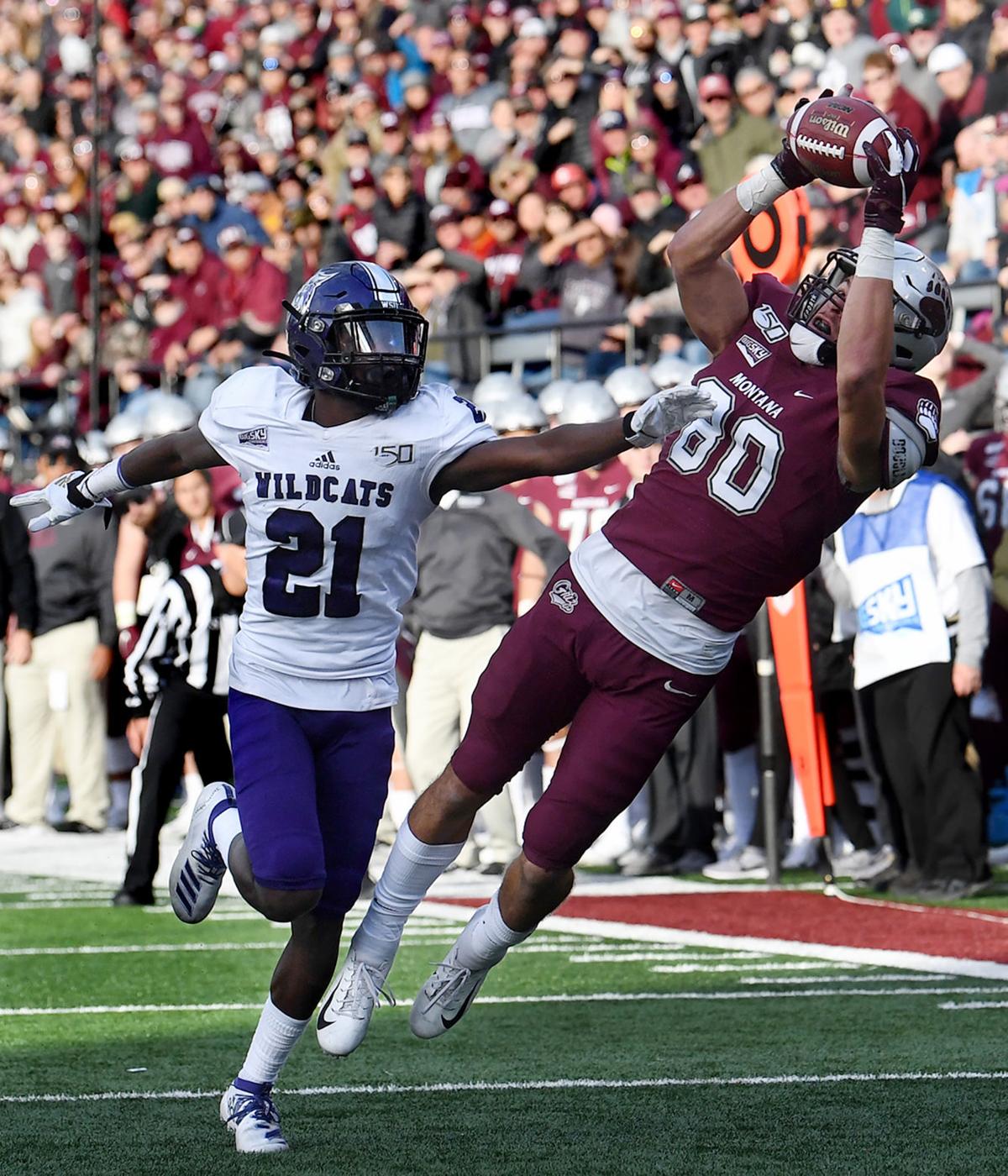 Montana's Mitch Roberts pulls in a pass from Dalton Sneed during the second half Saturday in Missoula. 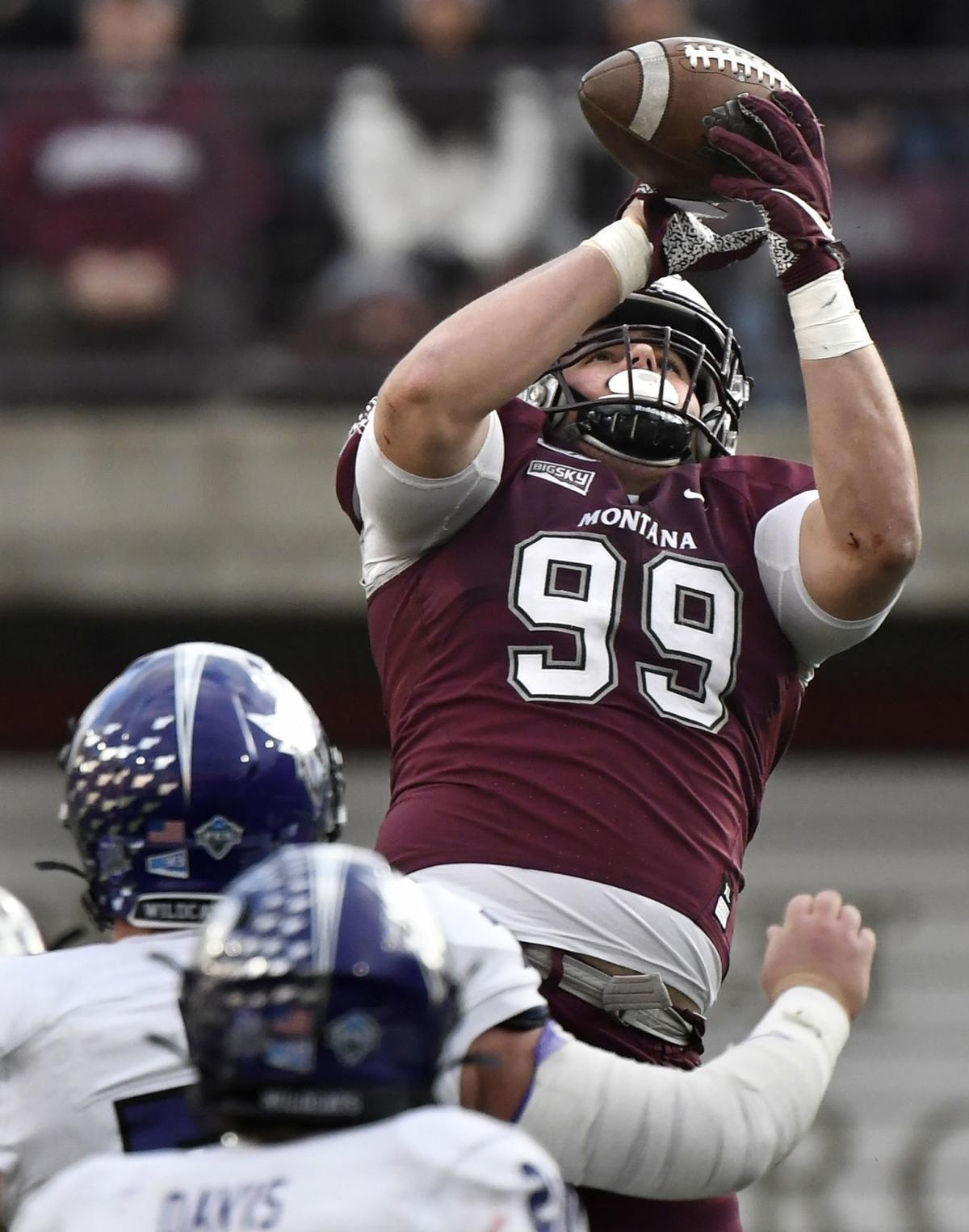 Montana's Alex Gubner pulls down his fourth interception of the year during the fourth quarter Saturday in Missoula . 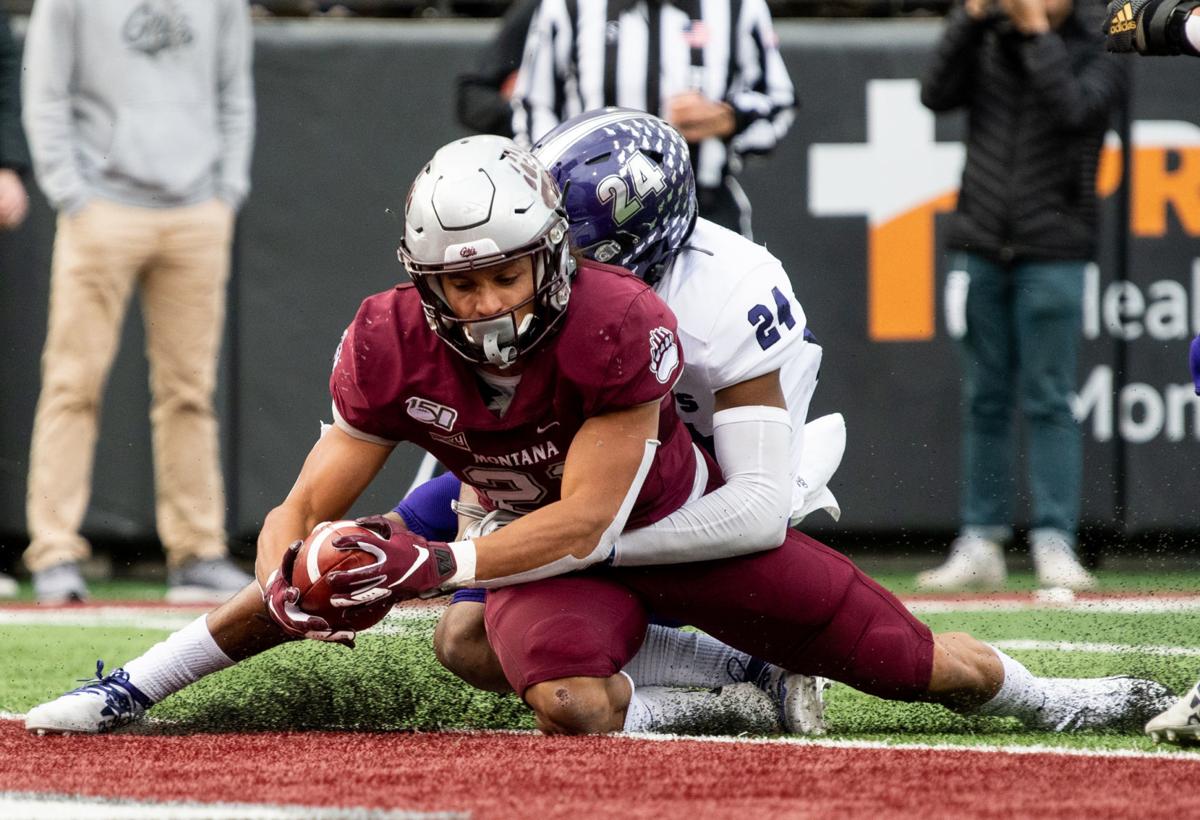 Montana's Marcus Knight scores his first touchdown of the game as he gets tackled by Weber's Jakobe Harris in the first half. 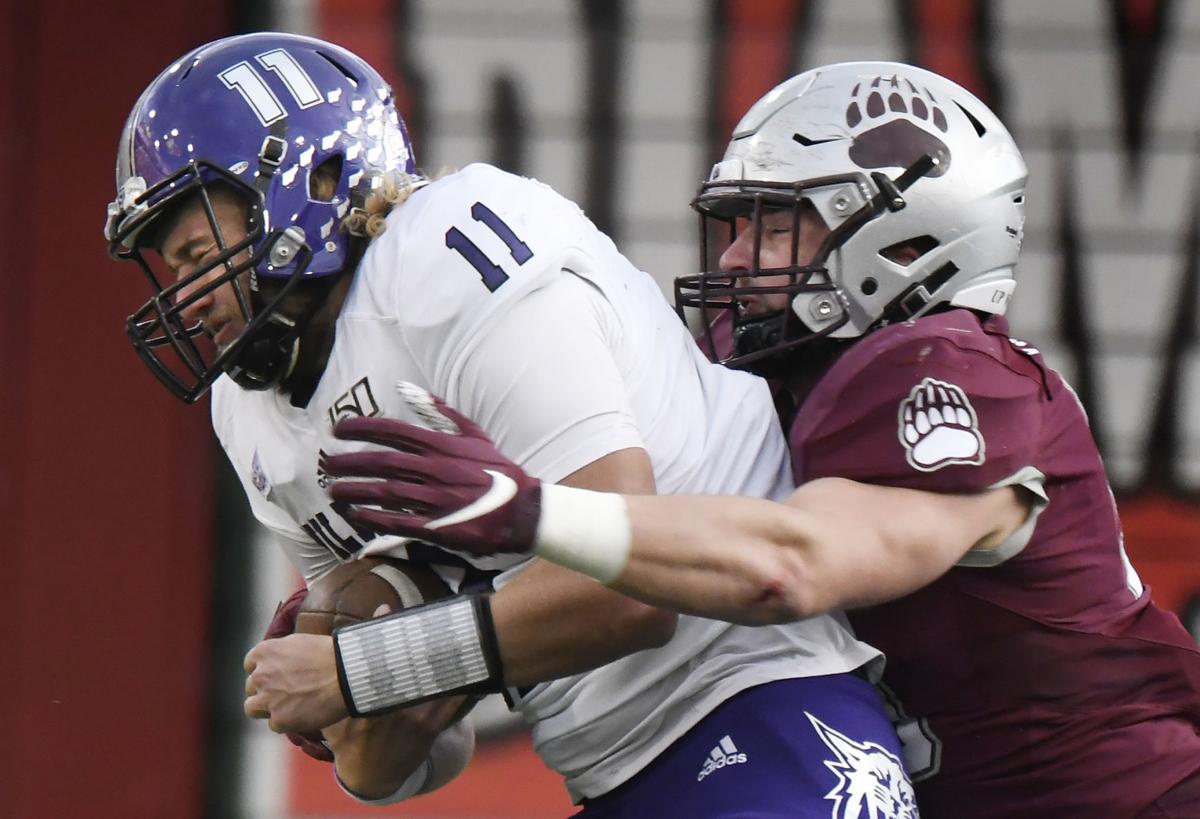 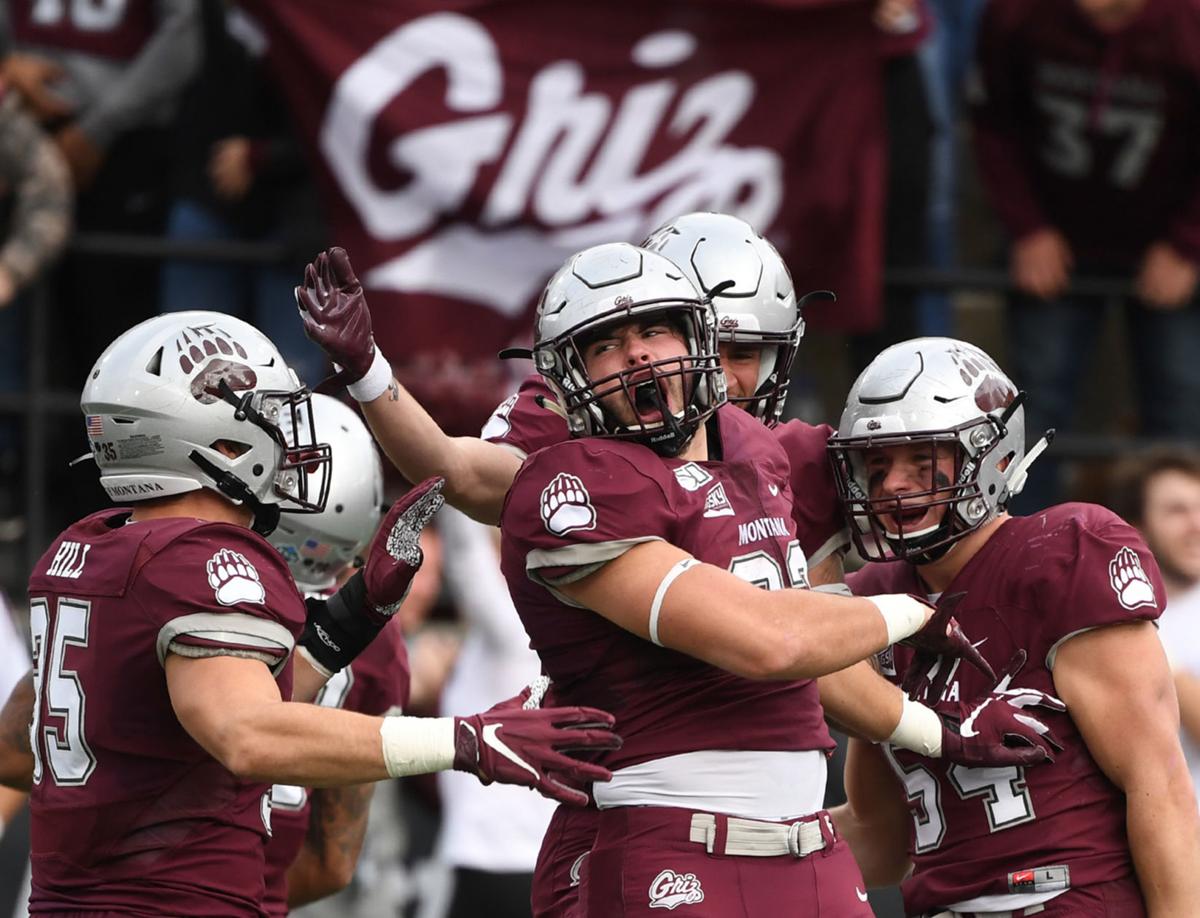 Montana's Drew Turner celebrates after recovering a fumble during a Weber State punt in the second half.

Montana's Mitch Roberts pulls in a pass from Dalton Sneed during the second half Saturday in Missoula.

Montana's Alex Gubner pulls down his fourth interception of the year during the fourth quarter Saturday in Missoula .

Montana's Marcus Knight scores his first touchdown of the game as he gets tackled by Weber's Jakobe Harris in the first half.

Montana's Drew Turner celebrates after recovering a fumble during a Weber State punt in the second half.

He didn’t think “very solid” was the correct term either to sum up the win in which Montana built a 35-3 lead in a game that was never in doubt for most of the second half.

Hauck settled on “outstanding” to label fifth-ranked Montana’s upset win over third-ranked Weber State, a game in which the defense locked down, the special teams made key plays, and the offense took advantage of short fields and used chunk passing plays.

Montana moved to 9-2 overall and 6-1 in the Big Sky Conference with the statement win by handing the Wildcats (8-3, 6-1) their first loss to an FCS team this season, in front of an announced crowd of 22,682.

The win keeps the Griz alive for at least a share of the Big Sky title for the first time since 2009 and puts them in position to potentially earn a first-round bye in the playoffs heading into the Brawl of the Wild next week in the season finale.

“That’s pretty outstanding by these guys,” Hauck said. “It was a good win for our football team. We played well in all three phases. I thought our preparation all week was outstanding. I thought that the entire team took to heart that we had a big game this weekend. The preparation was such that we were going to be hard to beat.

“Then we came out and played well and took care of business in a big, big way. Weber’s got a good football team. It was fun to get after them like that and have a pretty comfortable win.”

Weber State’s three-headed rushing attack was highly touted all week long, despite the status of reigning national freshman of the year Josh Davis being unknown. Davis played but took just nine handoffs while Kevin Smith carried the load. The Griz held the Wildcats to 69 rush yards on 36 carries, an average of 1.9 per rush.

Montana picked off quarterback Jake Constantine three times and limited him to 18-of-34 passing for 170 yards before he left after taking a hit in the fourth quarter. Backup Kaden Jenks threw two inconsequential touchdowns, completing 10 of 17 passes for 124 yards.

“Our defense was good,” Hauck said. “We were good in coverage. We were good up front in pass rush in terms of putting pressure on the quarterback. Obviously, our run defense was outstanding.”

Hill pointed to those as factors that hampered his team, but he gave credit to Montana for earning the win.

“I thought we should have opened up the game a little bit more early as far as keeping them honest with some throw stuff,” Hill said. “But again, when you lose Shaheed and Devon Cooley in the first five minutes of the game, that changed some things drastically for us and what the game plan was. I thought that allowed them to pin their ears back a little bit more and you know, focus on Kevin Smith and taking him out.”

All three of Montana’s interceptions came after the Griz established a 21-3 lead in the second quarter. Senior safety Josh Sandry picked off a tipped pass near midfield, helping keep the 18-point margin at intermission.

In the second half, junior safety Gavin Robertson intercepted a pass in the end zone to keep Montana’s lead at 35-3 two plays after he was called for pass interference. Redshirt freshman defensive lineman Alex Gubner got in on the fun, collecting his team-leading fourth interception of the season.

“We’ve always been a confident group,” said Sandry, who was called for targeting in the game, although it was overturned. “I wouldn’t say that this game sparked anything new in us. We know the guys we have in the locker room. We trust each and every one of them that we got. I think you could see that today; we’re just out there having fun.”

Montana led 21-3 at the half after Weber State botched a snap late in the second quarter and Jenks lost 20 yards, forcing a 50-yard field goal that Trey Tuttle missed. That was the latest of three poor snaps in the first half.

On the opening possession of the game, a rolling snap on a punt led to a partial block by Garrett Graves on a 5-yard punt that traveled to the Weber State 30-yard line. Three possessions later, another poor snap led to a fumble forced by Michael McGinnis and recovered by Drew Turner at the Weber State 21-yard line. The Griz turned both of those into touchdowns.

“Obviously, we set up some great field position with our special teams,” Hauck said. “I thought those fellas in the kicking unit were geared up and ready to go from the first play on and played outstanding. It was good. It’s a team effort. Again, the field position battle was ours, the big play battle was ours and the rush offense and rush defense battles were ours. When we do that, we’re going to win.”

The Grizzlies’ defense and special teams helped set them up in favorable field position. Their quick strikes and explosive plays led to five scoring drives of less than three minutes, three of which were less than one minute.

Wide receiver Samori Toure finished with a career-high 193 receiving yards and three touchdowns on eight catches. He had scoring grabs of 10, 79 and 59 yards to go up 7-0, 14-3 and 28-3, respectively.

Running back Marcus Knight carried the ball 14 times for 79 yards and two touchdowns. His 15-yard run gave the Griz a 21-3 lead, and his 1-yard score put them up 35-3 midway through the third quarter.

Quarterback Dalton Sneed was 17-of-25 passing for 265 yards with three touchdowns and two interceptions.

Montana finished with 394 yards of offense to Weber State’s 363, skewed because of two late drives by the Wildcats against some of the Grizzlies’ backups.

“They were ready to play today,” Hill said. “They were physical. I thought they played a great game. That’s the best I’ve seen ‘em play. They took it to us, and we got our butts kicked.”