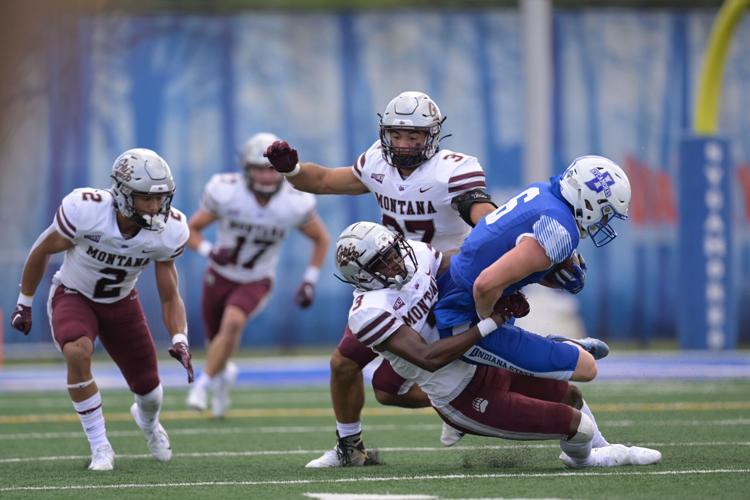 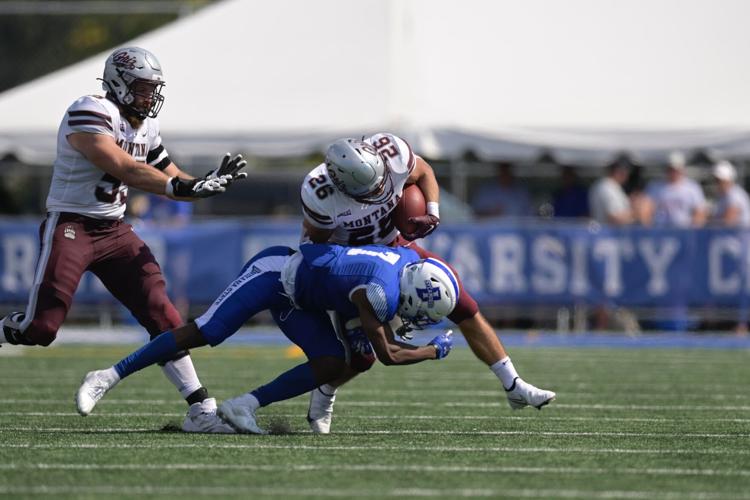 Montana running back Nick Ostmo carries the ball while Indiana State defensive back Johnathan Edwards attempts to make a tackle. 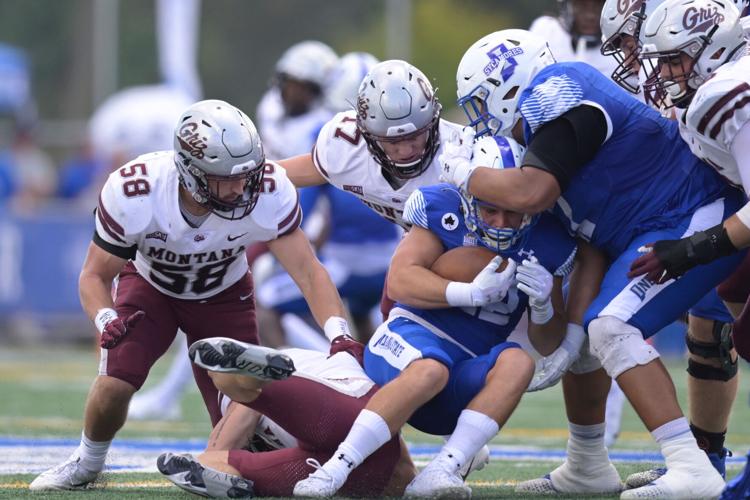 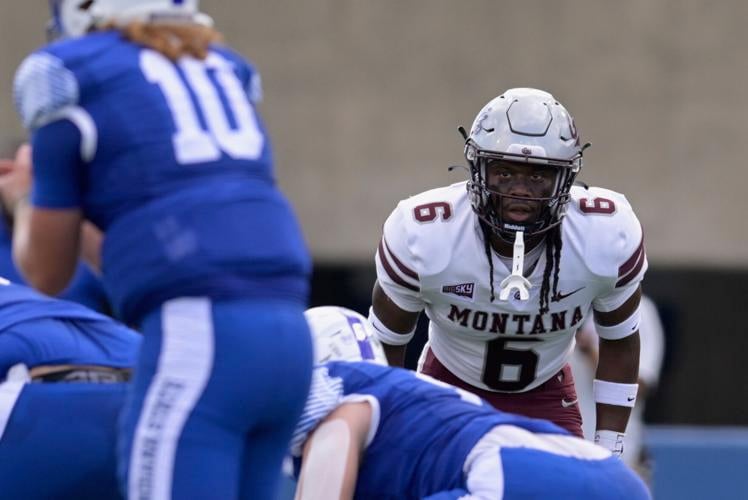 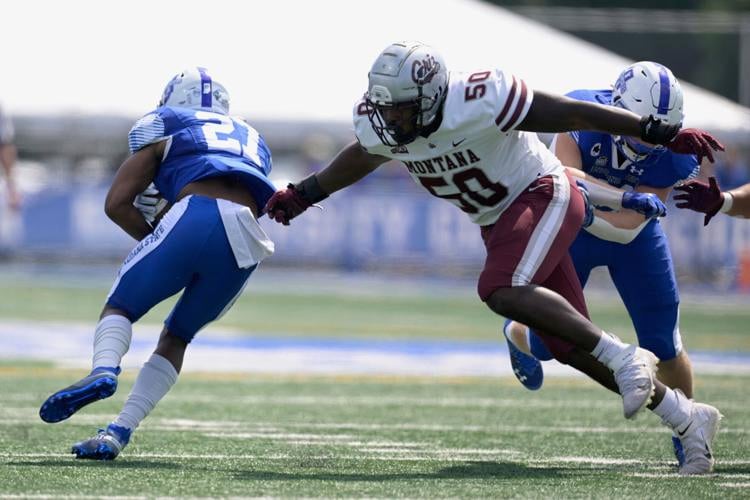 Montana defensive end DeAri Todd (50) chases Indiana State running back Justin Dinka (27) in the game between the Griz and Sycamores on Saturday at Memorial Stadium in Terre Haute, Indiana. The third-ranked Grizzlies scored a 42-7 win to improve to 3-0.

Montana running back Nick Ostmo carries the ball while Indiana State defensive back Johnathan Edwards attempts to make a tackle.

Montana defensive end DeAri Todd (50) chases Indiana State running back Justin Dinka (27) in the game between the Griz and Sycamores on Saturday at Memorial Stadium in Terre Haute, Indiana. The third-ranked Grizzlies scored a 42-7 win to improve to 3-0.

TERRE HAUTE, Ind — Perhaps the most shocking part of Montana’s uncharacteristic defensive play in the first half Saturday was that Indiana State running back Justin Dinka went untouched on his 54-yard touchdown run on the first snap of ISU’s third drive.

That run accounted for nearly half of the 110 yards Indiana State gained on the ground in the first quarter. Subtract the yardage of two rushes for loss and two sacks, and the Sycamores netted 88 yards on 15 carries.

Even that was an astounding number given that the Griz had held their opponents to 109 total rushing yards in the first two games combined. The defense rebounded and gave up just 13 yards on 25 carries the rest of the day for a total of 101 yards on 40 rushes (2.5 yards per carry).

“It’s a little annoying to go out and give up that much rushing yards, but we got some stuff figured out and we played our butts off,” UM linebacker Pat O’Connell said after the 49-14 win. “I’m really happy to be a part of a group like this. It’s awesome to go make some adjustments and come out and put it in place.”

O’Connell noted the adjustments were holding the edge better, tackling better and communicating better. Griz coach Bobby Hauck pointed out he didn’t get the call in to the defense on the TD, leaving part of the defense playing one call and the other part another call.

O’Connell also said Indiana State’s pre-snap hand clap was getting the Griz defenders to reveal from where they were bringing pressure. Trying not to show that was another adjustment the defense made, he noted. He increased his season sack total to five as he tallied 2.5 Saturday, including a strip sack that defensive end Kale Edwards recovered and ran back for a 20-yard TD.

On the Sycamores’ drive after the TD run, they advanced the ball to UM’s 23-yard line before a sack put them off schedule. They settled for a field goal, which they missed. They had 10 drives after that, and those ended with seven punts, two end of halves and a turnover on downs.

ISU totaled 132 yards of offense in the first quarter and had 197 by the intermission. In the final 30 minutes, UM allowed just 22 yards for a total of 219 on 67 plays (3.3 yards per play). That’s right in line with the 212 Northwestern State gained and 209 South Dakota picked up.

“I think that’s a testament to the guys and to the attitude on the team,” O’Connell said. “Obviously, that’s our job is to stop guys from scoring. Especially on a big run like that, we can’t let that happen again. The guys know that, and everyone rallies around each other no matter what happens, everyone sticks together and it’s pretty awesome to see.”

Sophomore Junior Bergen has done a bit of everything for Montana and can now add throwing a touchdown pass to that list.

Bergen tossed a 27-yard scoring strike to a wide-open Malik Flowers in the first quarter after quarterback Lucas Johnson had lateraled the ball to Bergen. It was a throwback to when Bergen played quarterback in high school for Billings Senior. Johnson said UM worked on the trick play all week.

“Junior’s always been messing with me about him playing quarterback,” Johnson said. “It’s real nice to see him throw a dime on a play like that and it work. It was awesome to see him back out there.”

The Griz brought out the trick play again in the second quarter when Johnson lateraled the ball to Keelan White, who then lateraled it to Bergen. However, Bergen couldn’t find an open receiver and scampered out of bounds for a 6-yard loss.

Bergen is back to playing wide receiver this fall after he moved to running back about a week before the 2021 season opener because of injuries at that position. He took over as the punt returner late last year and has retained that job this season.

Through three games, he has nine catches for 118 yards and three touchdowns. Last year, he rushed for 498 yards and four touchdowns, and he caught 21 passes for 230 yards and one score.

“I don’t know what else we can ask him to do,” Hauck said. “He’s a pretty versatile guy though. Fired up for him.”

Montana’s win at Indiana State was its first victory in the Eastern Time zone in 14 years, snapping a six-game losing streak in such games.

This trip presented some logistical challenges. The game was 1 p.m. ET but 11 a.m. Mountain Time, and started less than 24 hours after the team flew out of Missoula. The Griz had an hour-long bus ride to the game Saturday morning because they stayed in Indianapolis.

They did have clear conditions at the game after practicing in smoke. Also unlike Missoula, there was 60% humidity to go along with temperature in the 80s.

He passed strong safety Vince Huntsberger, who officially had 393 from 1998-2001. The NCAA didn’t start counting postseason statistics until 2002.

Hauck needs three tackles to break linebacker Dante Olson’s record of 397 from 2016-19. He has 31 tackles through three games this season after entering the year with 364.

Malik Flowers is closing in on the UM career record for kick return yards, needing 34 yards to surpass the top mark.

Flowers’ 28-yard return Saturday was only his second return this year as teams avoid him. He has five career kick return touchdowns, which is a UM record and two off the Big Sky and NCAA Division I marks.

The No. 3 Grizzlies (3-0) finished the nonconference portion of their schedule on the road for the first time against Indiana State(1-2) in Te…

Barnum longs for his former home stadium, the Big Sky completes nonconference play, new rankings are out and a Grizzly earns conference player of the week.