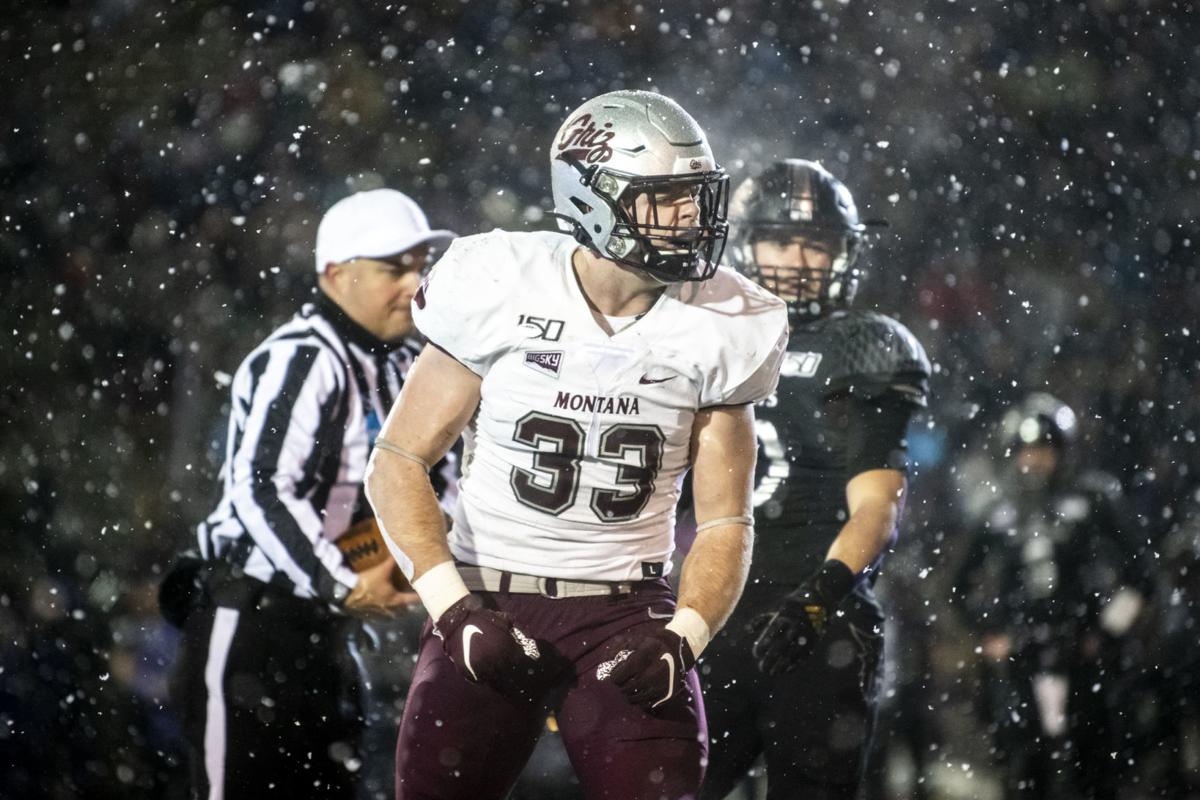 Montana's Dante Olson celebrates after a stopping Weber State from converting on second down during their FCS playoff quarterfinal game at Stewart Stadium in Ogden, Utah, on Friday night. Weber State won 17-10. Olson broke the school record for most career tackles with 397 and the Big Sky Conference record for most tackles in one season with 179 this year. 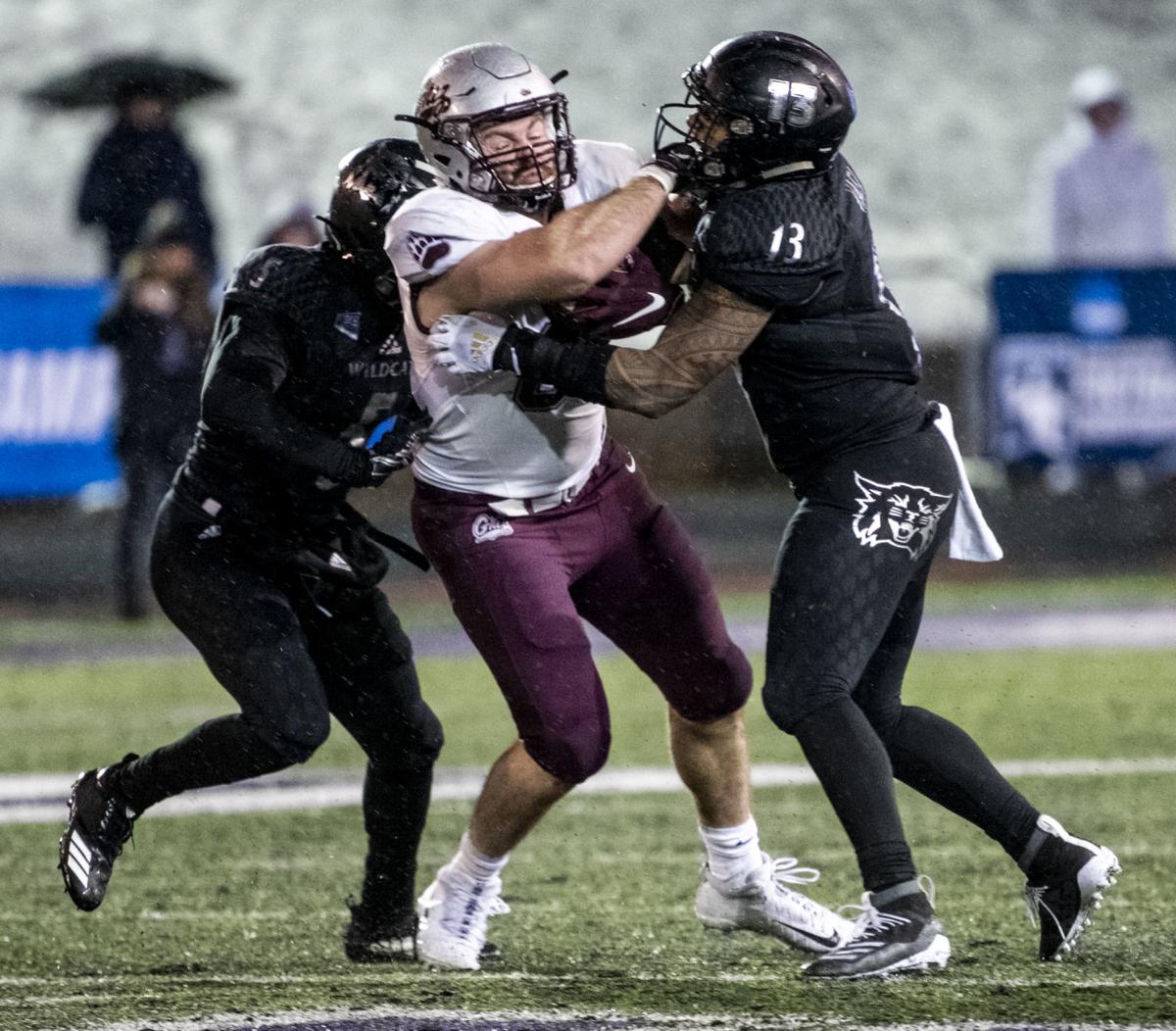 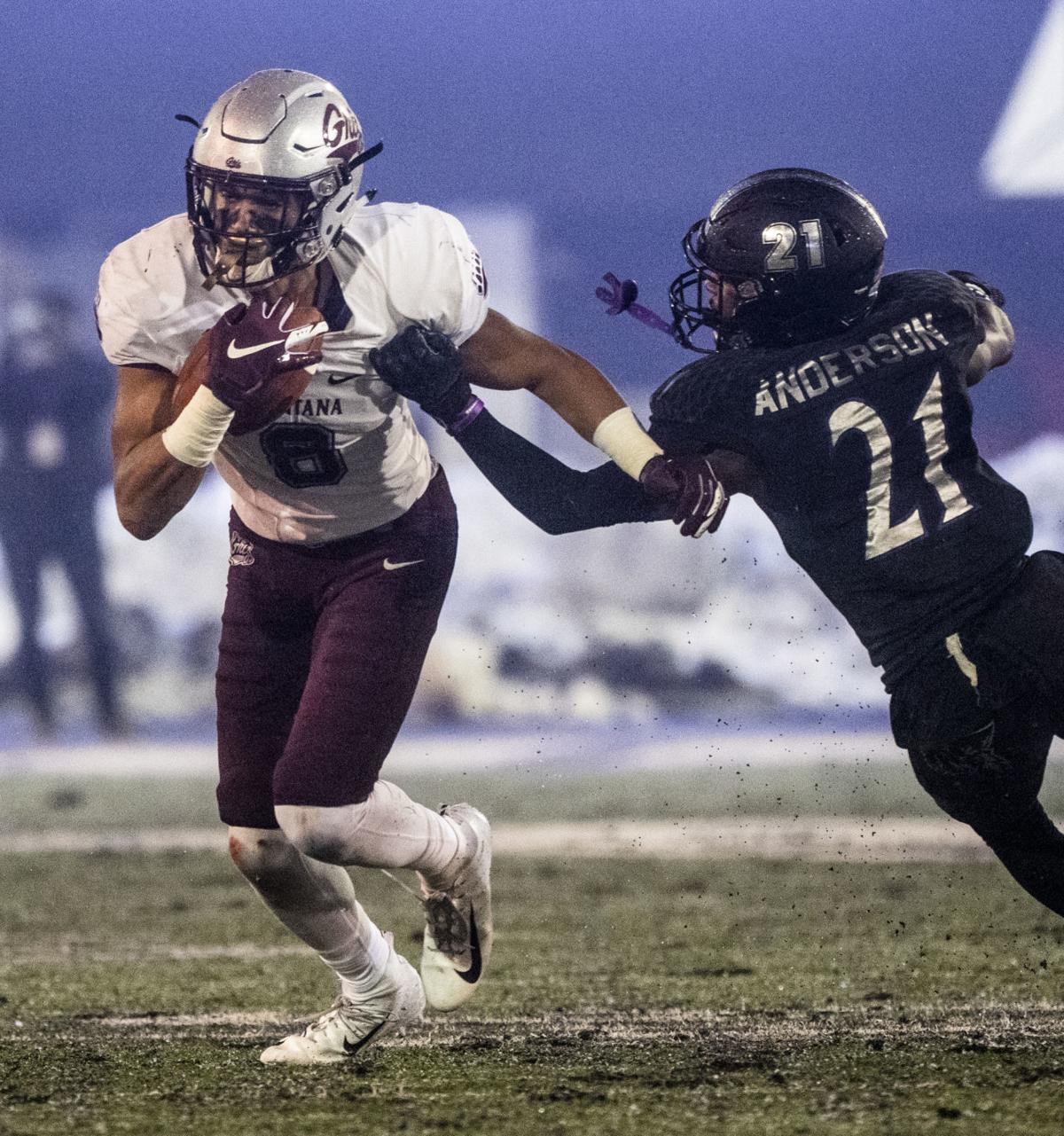 Montana's Dante Olson celebrates after a stopping Weber State from converting on second down during their FCS playoff quarterfinal game at Stewart Stadium in Ogden, Utah, on Friday night. Weber State won 17-10. Olson broke the school record for most career tackles with 397 and the Big Sky Conference record for most tackles in one season with 179 this year.

OGDEN, Utah — Montana senior linebacker Dante Olson tried to articulate some thoughts after his record-breaking performance in the FCS quarterfinals Friday, but he was more disappointed in the loss to Weber State than he was elated with an individual record.

Maybe in due time the 6-foot-3, 240-pound native of Medford, Oregon, will be able to more fully enjoy his accomplishment of breaking the Montana career record and the Big Sky single-season record for tackles.

“That’s awesome,” Olson said about the school record after the season-ending 17-10 loss at Weber State. “The pride and tradition of Montana’s really rich. It’s obviously an honor. I couldn’t happier to be a Griz.

“I’m more worried about we were 0-1 this week. Tackles are good, but I’m worried about one thing at the end of the day, and we didn’t get it done.”

It was that sort of bittersweet day for the Griz, who broke single-season team records and had players break individual records in what turned out to be the last game of a record-breaking season in which they officially returned to the quarterfinals for the first time since 2009.

Olson finished his career with 397 career tackles, topping the mark of 393 held by Grizzly Hall of Famer Vince Huntsberger (1998-2001), the lone Montana player to ever receive a Heisman vote. He collected 330 of his tackles in 25 starts, while Huntsberger started 55 games and unofficially had 469 tackles because the NCAA didn’t count postseason stats until 2002. Divide those for tackles per start, and Olson averaged 13.2 to Huntsberger’s 8.53.

Olson also finished the season with 179 tackles, surpassing the mark of 176 set by Eastern Washington’s J.C. Sherritt in 2010.

He also owns the two best individual tackling seasons in school history. He first broke Kendrick Van Ackeren’s record of 130 by tallying 151 in 2018, his first year as a starter.

Montana set at least three single-season school records as a team and came close to breaking at least two others during the loss.

Montana liked to throw the ball in 2019 and collected a single-season record 196 passing first downs to break the mark of 188 set in 2004.

The Griz just missed out on the single-season record for overall first downs. They finished with 335, coming up short of the record of 346 set in 2004.

Montana finished its offense-heavy season with 514 points, just a few scores away from the 537 it scored in 2009, which is also a Big Sky record.

Montana junior wide receiver Samori Toure broke a pair of single-season school records in the loss to cap a rebound year in which he changed jersey numbers after a sophomore slump.

The 6-foot-3, 190-pound native of Portland, Oregon, also caught eight passes to give him 87 receptions for the season. That topped the mark of 82 held by Joe Douglass since 1996.

Louie-McGee’s 2,277 career receiving yards are the 13th most in school history.

Montana sophomore running back Marcus Knight didn’t disappoint in his first season with the Griz after transferring from the California junior college ranks.

Knight ran for 1,030 yards, the 12th-best single-season performance in school history. He was just the 13th Grizzly to ever eclipse 1,000 rushing yards.

Montana senior quarterback Dalton Sneed finished his two-year stint with the Griz having thrown 47 touchdowns, the sixth most in school history. The only players ahead of the Scottsdale, Arizona, native are Dave Dickenson, Brian Ah Yat, Jordan Johnson, Cole Bergquist and Grady Bennett.

Sneed’s 6,159 passing yards in just 23 games are the eighth most in program history. His 267.8 passing yards per game are the third most, behind just Drew Miller and Dickenson.

Even though he was in Missoula for a short time, the relationship he built have stood out.

"It goes from a teammate perspective to a brother perspective because at the end of the day, just like for some of us today, football ends," Sneed said. "But you know, the relationships you make in life don’t. And that goes forever. I made relationships that will last a lifetime.

Montana sophomore Malik Flowers broke the school’s single-season record for kickoff return yards. His 879 yards on 32 returns topped the 836 Jabin Sambrano had in 2011.

Montana redshirt freshman Alex Gubner intercepted four passes in 2019, the most by a Grizzly since safety Matt Hermanson had six in 2014.

The unique thing about Gubner’s interception total is he’s a 6-foot-3, 285-pound defensive lineman. The West Hills, California, native had picks against North Alabama, Sacramento State, Portland State and Weber State, returning them for a total of 22 yards.

Montana’s loss to Weber State was its third consecutive postseason road loss, dropping the program to 2-11 all-time on the road in the playoffs. It’s the fourth straight loss if the vacated 2011 semifinal defeat is included.

The Grizzlies’ last road win in the postseason remains the upset of No. 1 James Madison on Dec. 12, 2008, in Harrisonburg, Virginia.

The game against Weber State was coach Bobby Hauck’s sixth time playing a team twice in a season in his career, not just at Montana. His teams have never won both meetings.

The last time the Griz beat a team twice in a season remains a 1986 sweep of Idaho State.