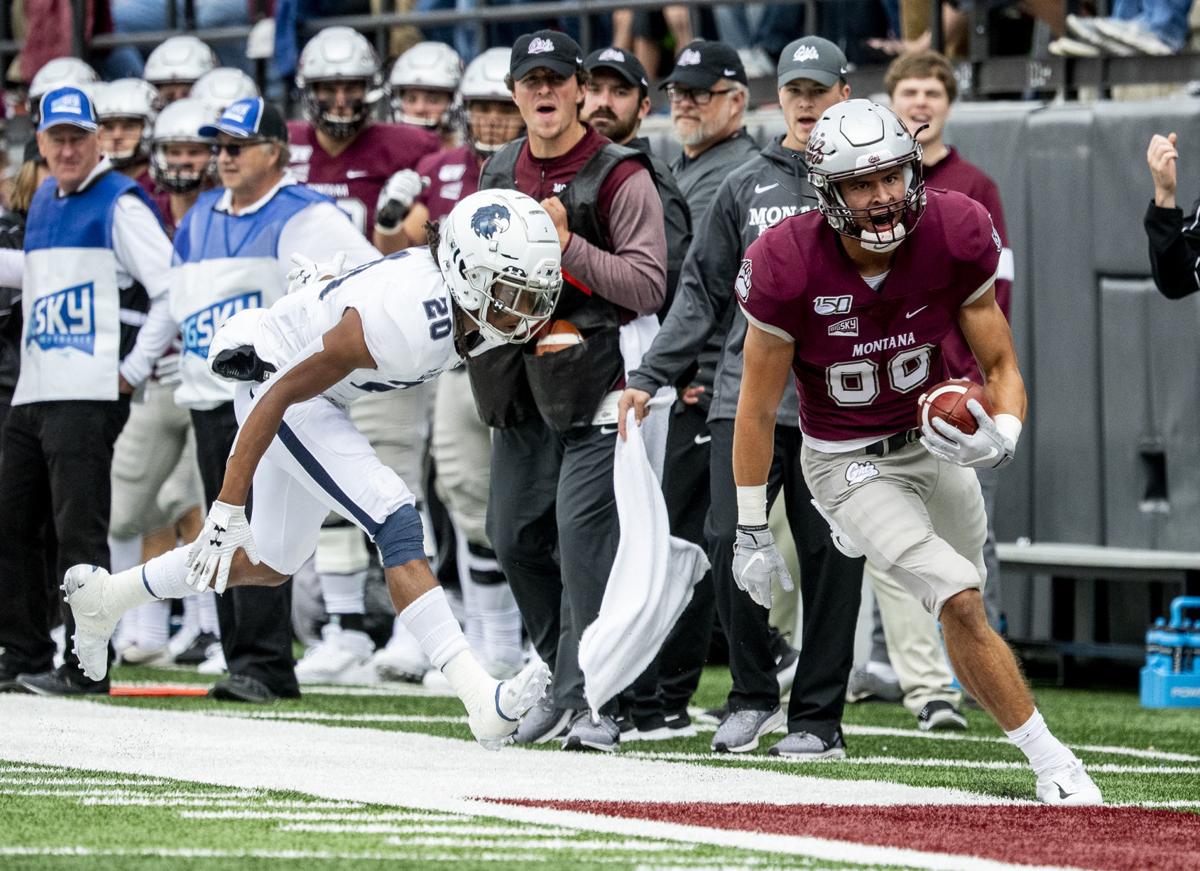 Montana sophomore wide receiver Mitch Roberts (80) is pushed out of bounds by Monmouth's Justin Terry (20) during the Grizzlies' 47-27 win on Sept. 21 at Washington-Grizzly Stadium. Roberts led all Grizzly receivers with 80 yards in the game, his first breakout performance for Montana. 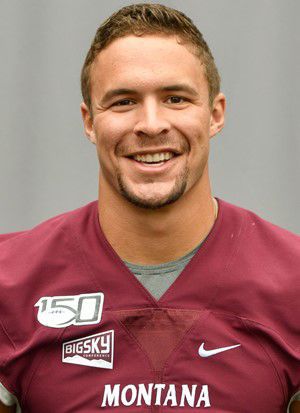 MISSOULA — Montana sophomore wide receiver Mitch Roberts broke out two weeks ago during the Grizzlies’ 47-27 win over Monmouth on Sept. 21.

The Missoula Sentinel grad caught five passes for a team-high 80 yards in front of the home crowd at Washington-Grizzly Stadium. He’s up to 118 receiving yards, the fourth-most on the team, on nine catches in five games, averaging 13.1 yards per reception.

"He’s been in the mix since spring," Montana coach Bobby Hauck said two days after Roberts' breakout performance. "We felt real good about Mitch’s ability coming out of spring. It’s competitive in that group to get on the field. When the ball went to him on Saturday, he made plays. He was great catching it, but he was also good moving the chains and getting some tough yards after the catch, which was probably most impressive."

After having just one catch for 6 yards in 2018, the 6-foot-1, 200-pound Roberts is enjoying the added responsibility of having a larger role. He’s also the main holder on kicks after being second string to Reid Miller last year.

Roberts sat down with 406mtsports.com to talk about his breakout season:

Q: How would you describe yourself as a wide receiver?

A: I’m not the fastest guy, but I try to take pride in running good routes and blocking and doing my assignment and being perfect and giving the best effort I can every play.

Q: What’s the biggest leap you feel you’ve made since last year?

A: I would say strength. Being a freshman, you’re still learning how to use your strength. I think after the workouts in the summer and going through winter conditioning, I feel a lot more comfortable with my strength and being able to block better and hold my own out there.

Q: It had to be cool for a hometown kid to commit to Montana, but to now have been playing a larger role this year, what’s that feeling been like?

A: It’s a pretty good opportunity. It’s really cool, especially watching the Griz growing up and now you’re in those shoes. It’s definitely an honor. It’s a good thing to be a part of. It’s a fun team to be around. Good group of guys.

Q: What was the feeling like against Monmouth to finally play a big role in a game as a wide receiver and hear the roar of the crowd for something you did?

A: It was a fun game. Our quarterbacks do a good job getting the ball out to us receivers and letting us make plays, letting us get into a little bit of a rhythm every game. That game's kind of long gone. We’re focusing on Idaho State now.

Q: How much and in what ways has the competition in the wide receiver group going back to the spring helped you grow as a receiver?

Q: Some fun ones to close. What’s your go-to music before a game?

A: I don’t listen to music before games. I’m kind of a boring guy when it comes to that.

A: I try to stay mostly as mellow as I can. Just get in my game plan, study up until kickoff. That’s about it. Nothing really special.

Q: What’s been your favorite class at Montana?

A: I don’t know. I’ve just had a lot of great professors. I like the one that I’m in right now — data analytics — with a couple teammates. It’s focusing on analyzing data and MIS (management information systems).

A: I don’t like the scratching noise of nails on chalkboards. It definitely gets me every time.

Q: Do you have any secret talents?

A: Playing a little bit of guitar is something I could say is a talent. I taught myself how to play and have been playing for about a year.

Q: Why the interest?

A: It was just a random thing I wanted to pick up and learn and do something new when I’m bored, hanging around.

A: Country. Any kind of country.

Q: What three questions would you ask your dog?

A: Why are you so lazy? Do you even know my name? I don’t know what the other one would be.

Q: Last one. What’s it been like playing for Bobby Hauck?

A: It’s awesome. Coach Hauck’s a great guy and a great coach. He’s got really high expectations, and he preaches toughness. I think that’s what everyone wants here, and it’s really awesome what he does. He’s a great head coach, and I love being around that guy every day.